In Photos: The Homes Kashmiri Pandits Left Behind

Hundreds of thousands of Kashmiri Pandits left the Valley in the late 1980s and 1990s. 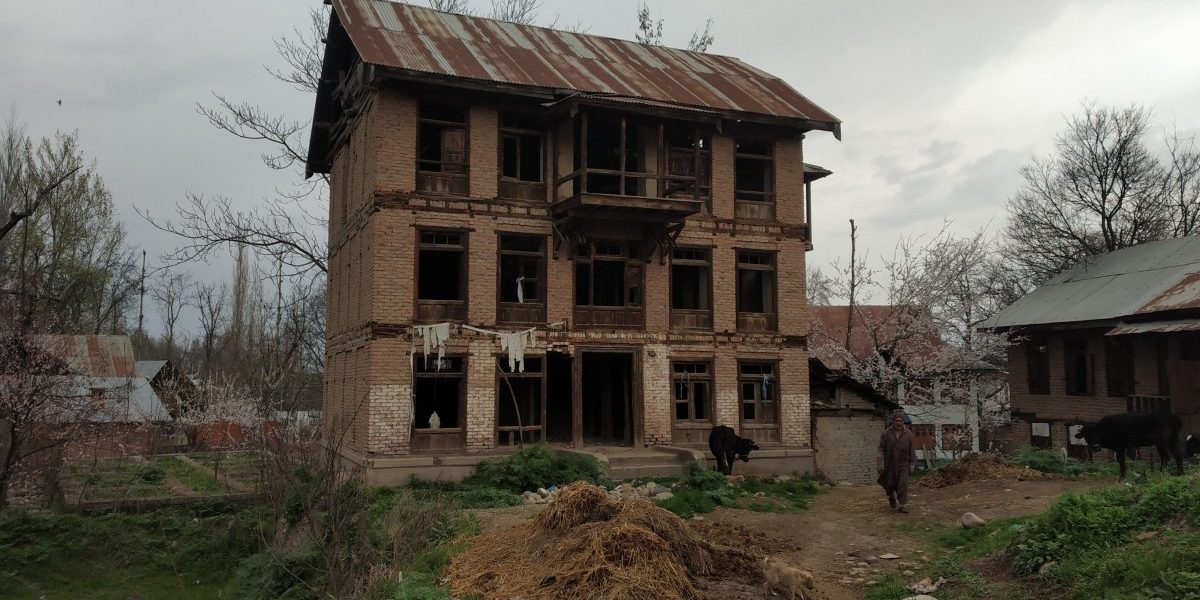 A dilapidated three-storey abandoned home in South Kashmir. Locals say before the 1990s, the house was sheltering the families of two brothers –Arzan Nath Koul and Brij Nath Koul. The house is now not in a liveable condition.

On January 27, defence minister Rajnath Singh said, “No power can now stop Kashmiri Pandits from returning to their homes in Kashmir.” Exactly 30 years since the exodus, much is being said about the horrors Pandits had to face in the Valley.

In the late 1980s, when the armed insurgency in Kashmir flared up, hundreds of thousands of Kashmiri Pandits, living as a minority across the Valley, migrated to Hindu-dominated Jammu and other states.

The population of Pandits in Kashmir diminished within a few years. Official figures suggest around 1,54,080 Pandits left the Valley in 1990. Contradicting government figures, many Pandits groups have claimed the number was much higher than that. They say a major chunk of Pandits left between January and March 1990. Every year, Pandits commemorate January 19 as ‘Kashmiri Hindu Holocaust Day’.

Pandit groups have said they were forced “into exile” in the 1990s and are living as “refugees” in their own country.

A state government report reveals that as many as 219 Hindus were killed in the Valley between 1989 and 2004. Some Pandit groups say the number is actually 387 deaths since 1989; others say it is as high as 650.

Also read: Those Who Stayed Back in the Valley

In 2008, the Central government announced the Prime Minister’s Return, Relief and Rehabilitation Scheme for Pandits who want to return to the Valley. As part of the package, around 3,000 Pandits who returned to the Valley in 2010 and 2012 have got state jobs.

These Pandits, who were rehabilitated in different “temporary” transit camps across Kashmir, say they were also promised family accommodation, cash relief for the first two years, scholarships and schools for their children. Except jobs, they say, none of the promises were fulfilled.

In the 1990s, when Pandits left the Valley, they had left behind their property including land, houses and shops. Some have since sold their property. However, there are tens of thousands of abandoned Pandit homes in the Valley.

They are either dilapidated or completely crumbled. The walls, ceilings, corridors, windows and doors of these houses reflect the pain Pandits had gone through. The Wire visited some of these houses, located in different villages across the Valley. 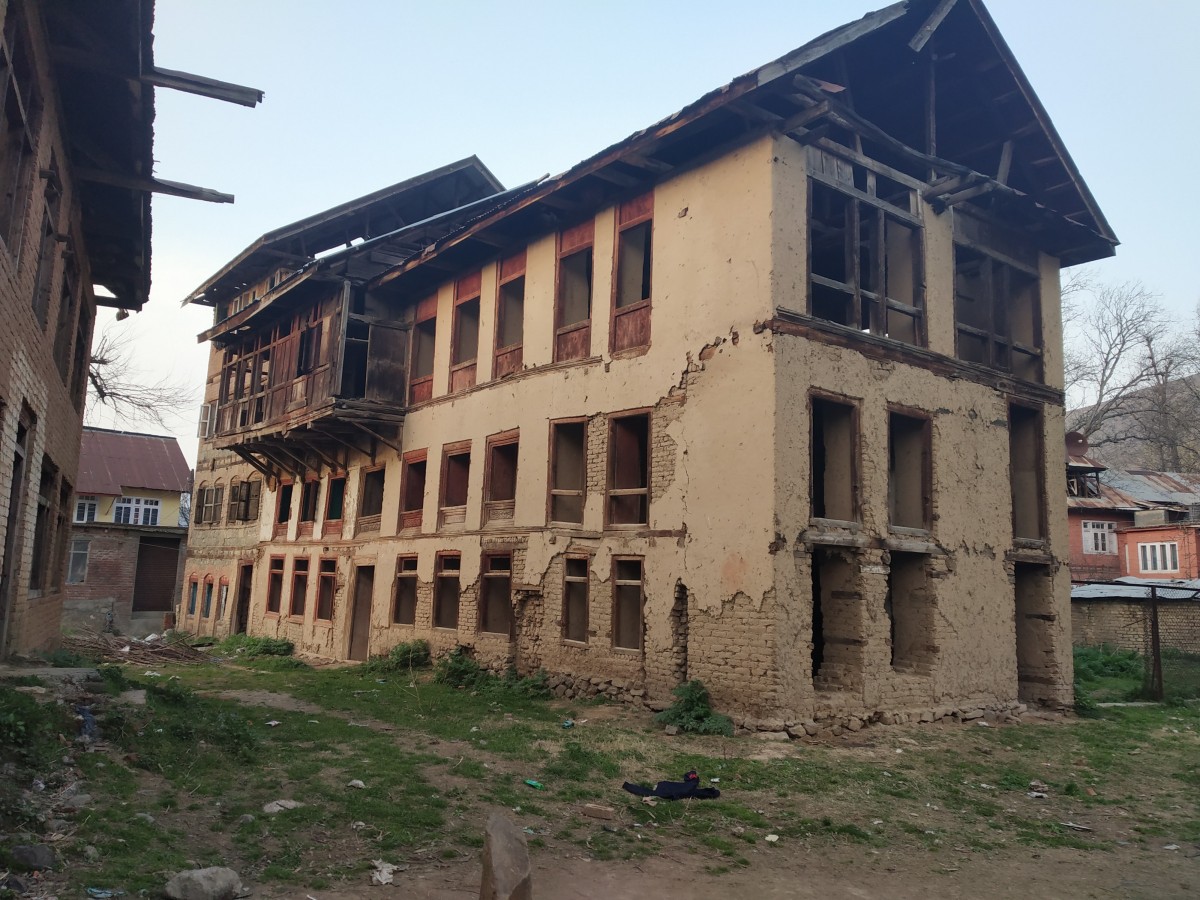 Three adjacent houses in Mattan village of Anantnag district belong to the Fotedar clan. The eldest brother, Makhan Lal Fotedar, was a senior political leader in the Indian National Congress. Makhan, who died on September 28, 2017 in Haryana, was also a leader of Kashmiri Pandits. The Fotedar families, according to villagers, left the village in the 1990s and never returned. 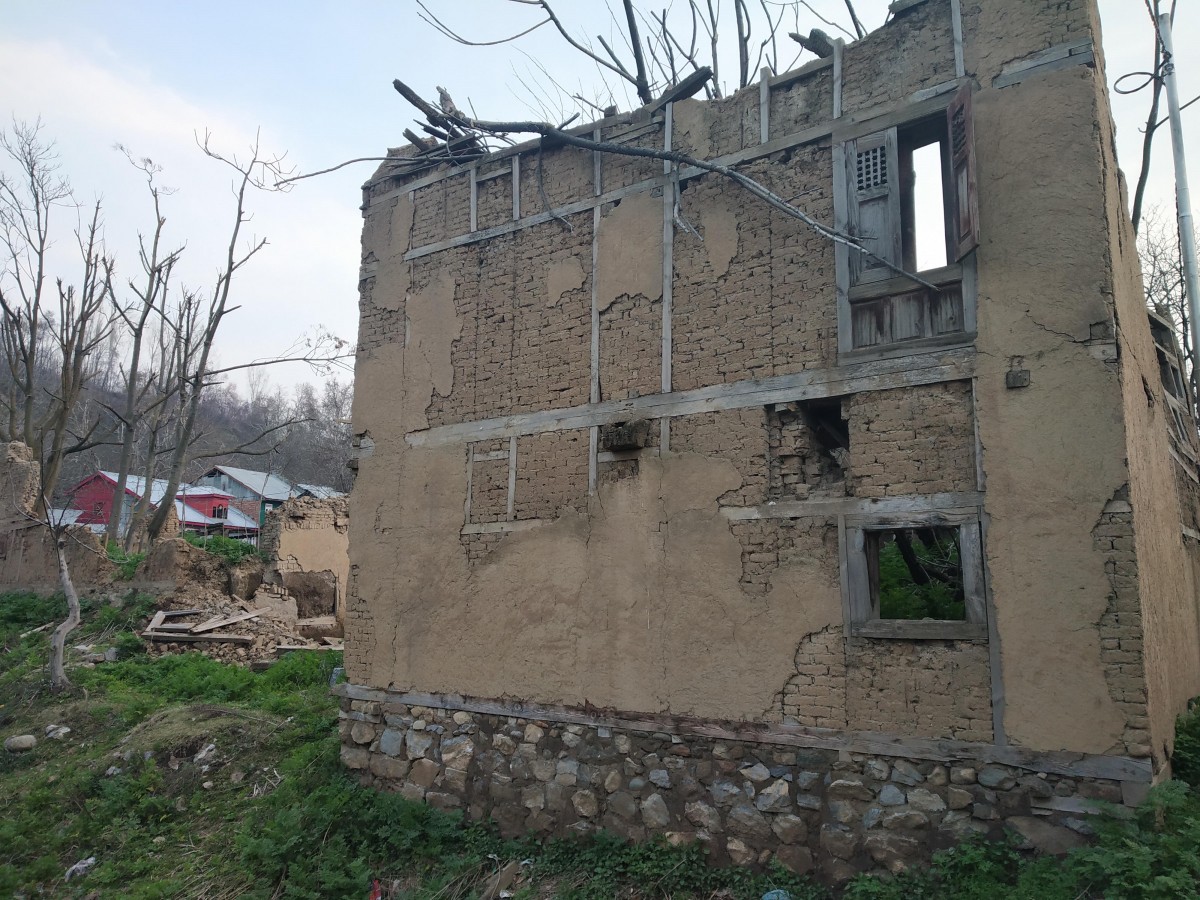 Once sheltering the cheerful families of Kashmiri Hindus, these muddy houses have now crumbled. The owner of the half-crumbled house was running a grocery shop in the locality before the 1990s. Every evening, villagers remember, Muslim and Hindu neighbours were gossiping with each other while sitting on a Pandit’s shop front. 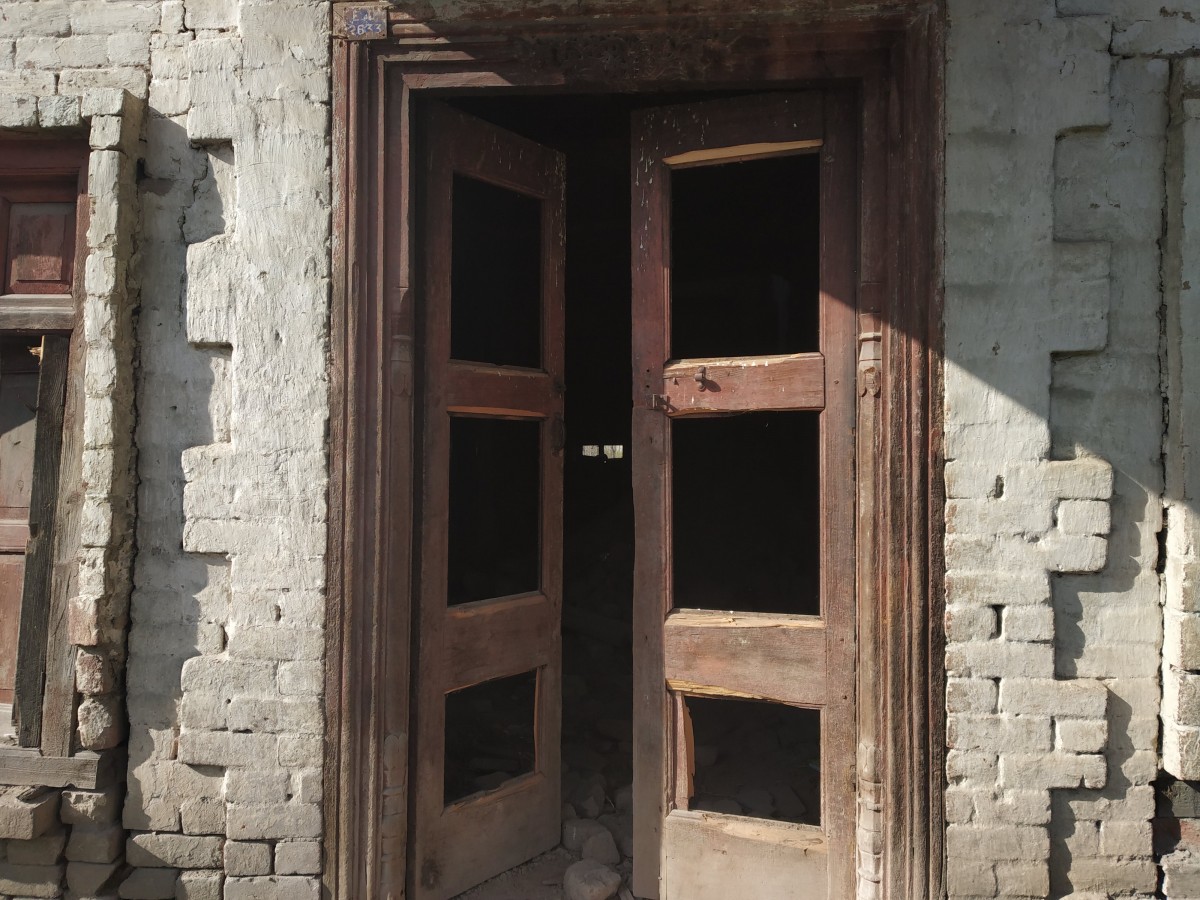 The broken entrance door of a Kashmiri Hindu house. The half-open door suggests that someone is living here, but the house is completely shattered inside. 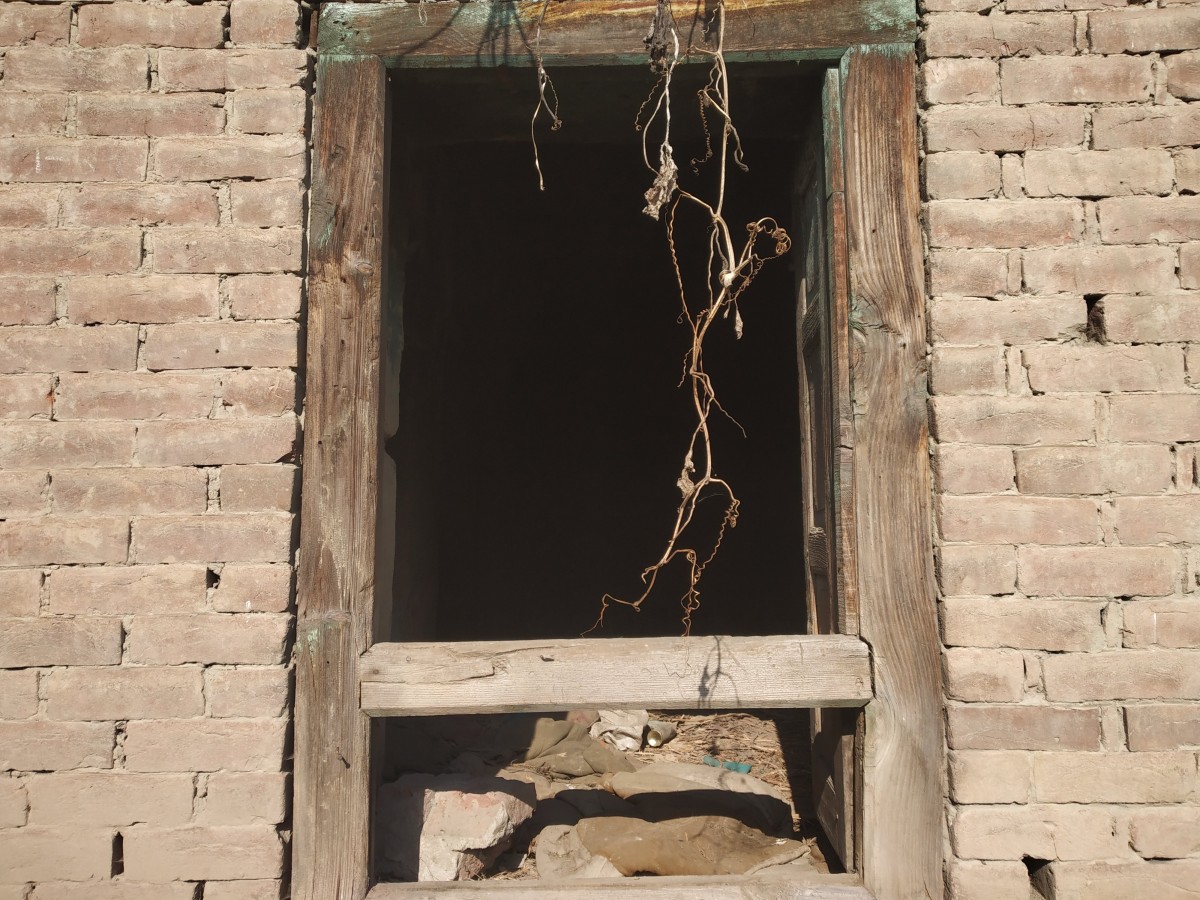 A window of a four-storey abandoned Kashmiri Hindu house is left open. The tattered mattresses and shreds of a wrapper (used to protect the body from the cold during winters in Kashmir) are scattered inside. The house of Shambu Nath Koul, who was shopkeeper, crumbled from one side. According to neighbours, Shambu was very fond of kitchen gardening. He had turned the front yard of his house into a productive and attractive kitchen garden. 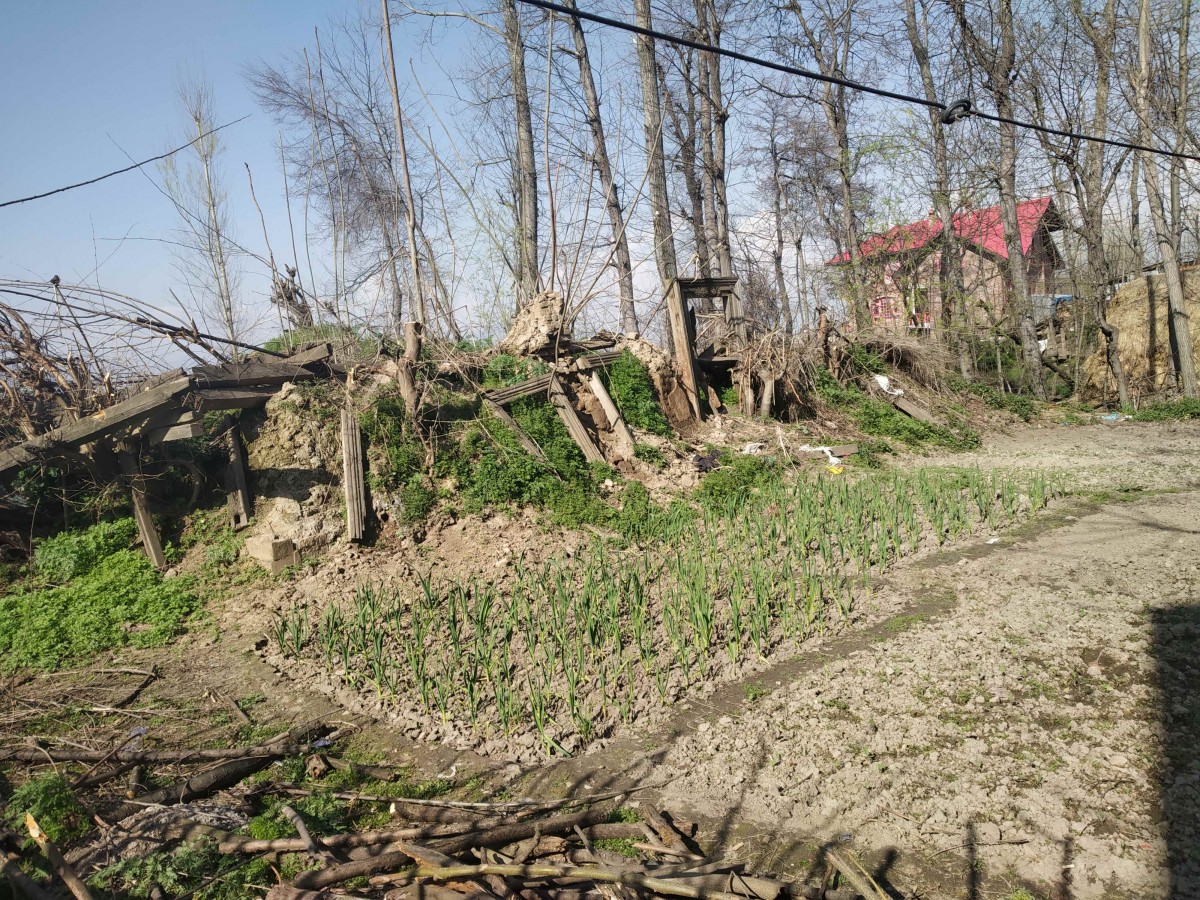 Only the skeleton of the entrance door of this two-storey house is standing. The mud house has collapsed since the Kashmiri Hindus left the Valley in the 1990s. 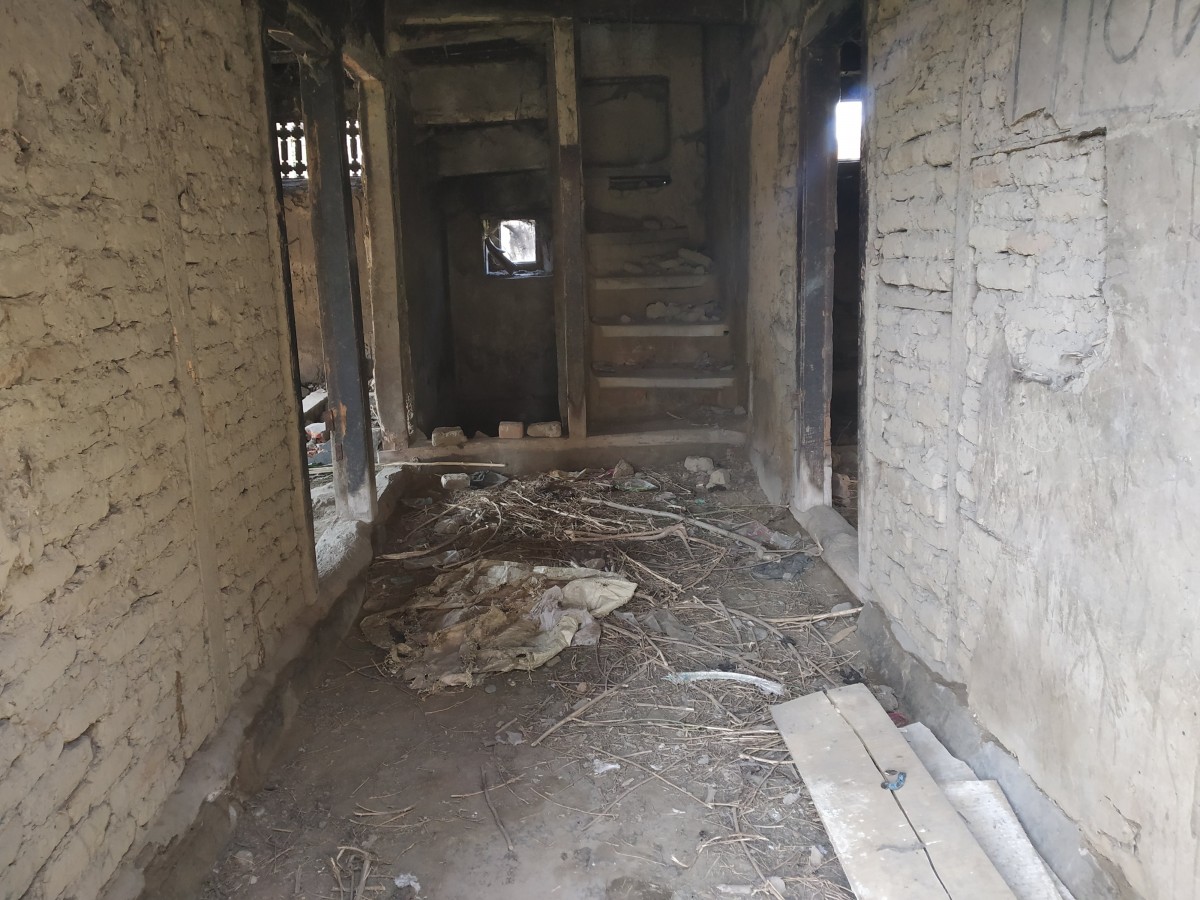 A desolate corridor of a Pandit’s house. Before the 1990s, villagers say, the owner of the house was the village head (locally called the ‘mokdum’). 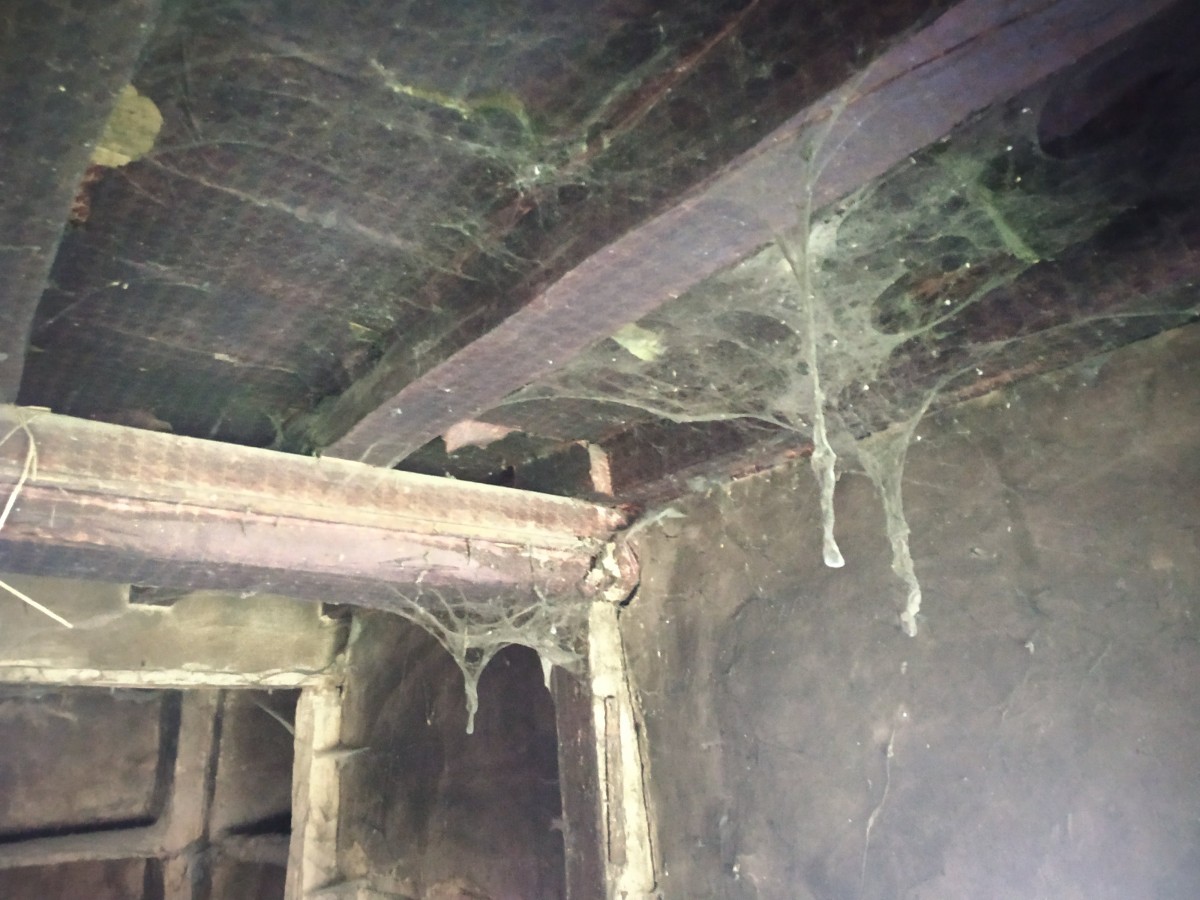 Impenetrable cobwebs are present in almost every abandoned Kashmiri Hindu home. Shelves, drawers and ceilings are obliterated by dense cobwebs. 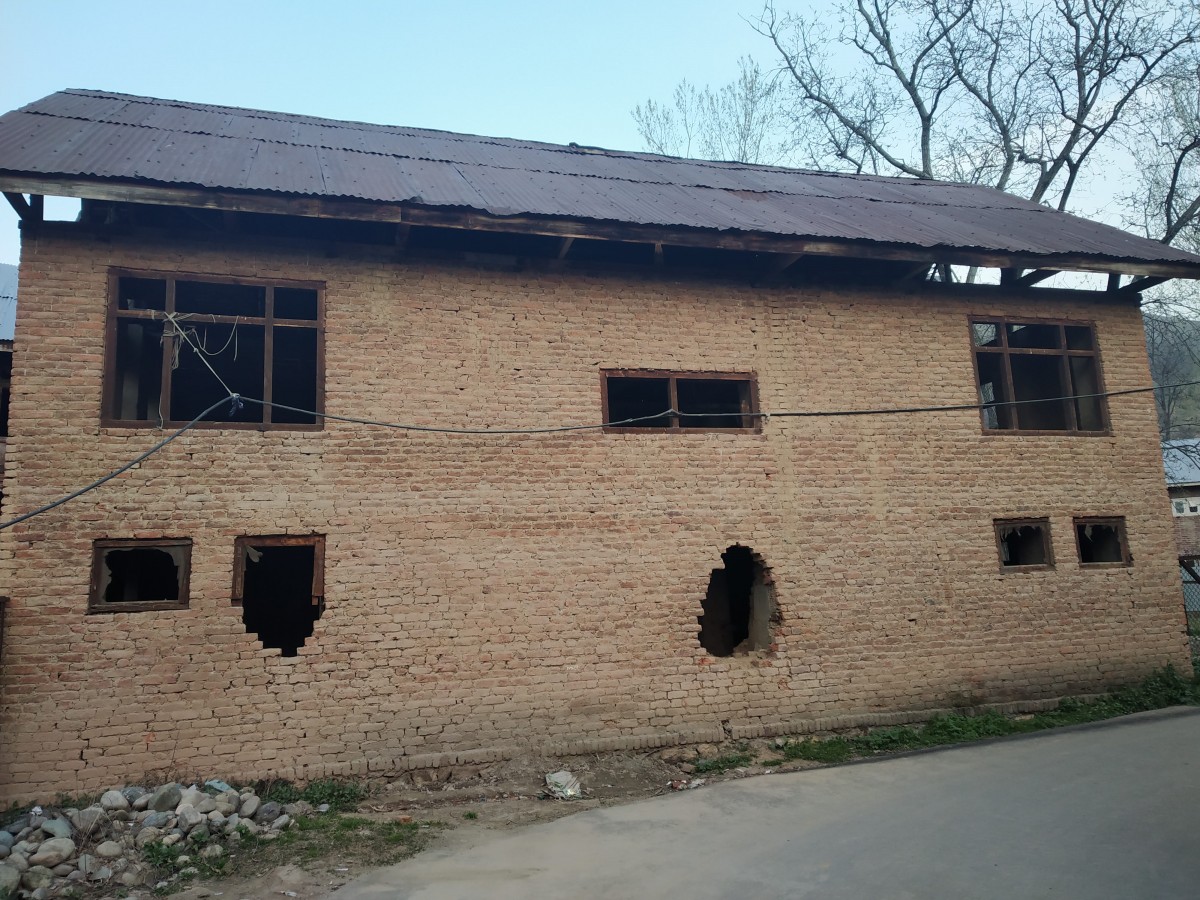 Some parts of abandoned homes have fallen in, leaving gaping holes in the walls. 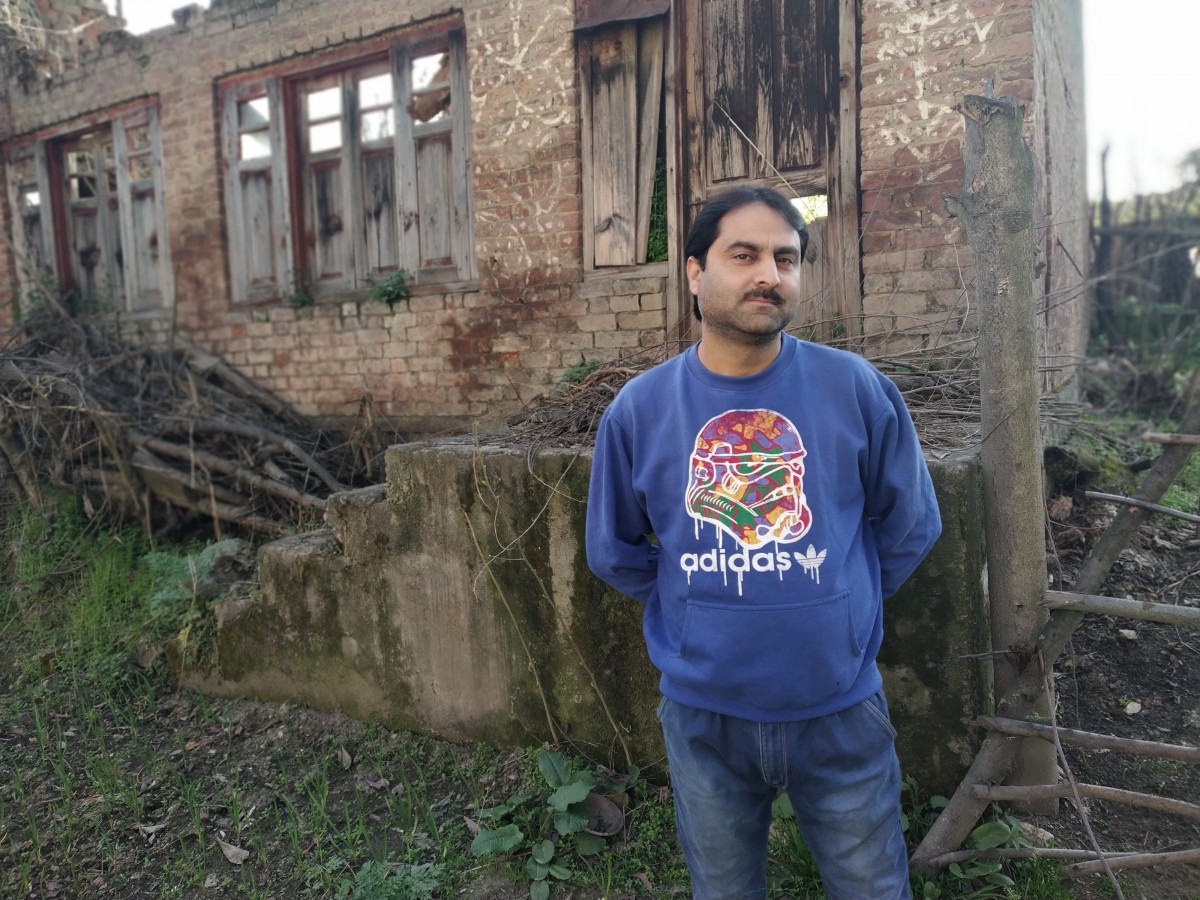 Rakesh Kumar Sharma posing for a photograph in front of his uncle’s ruined home. 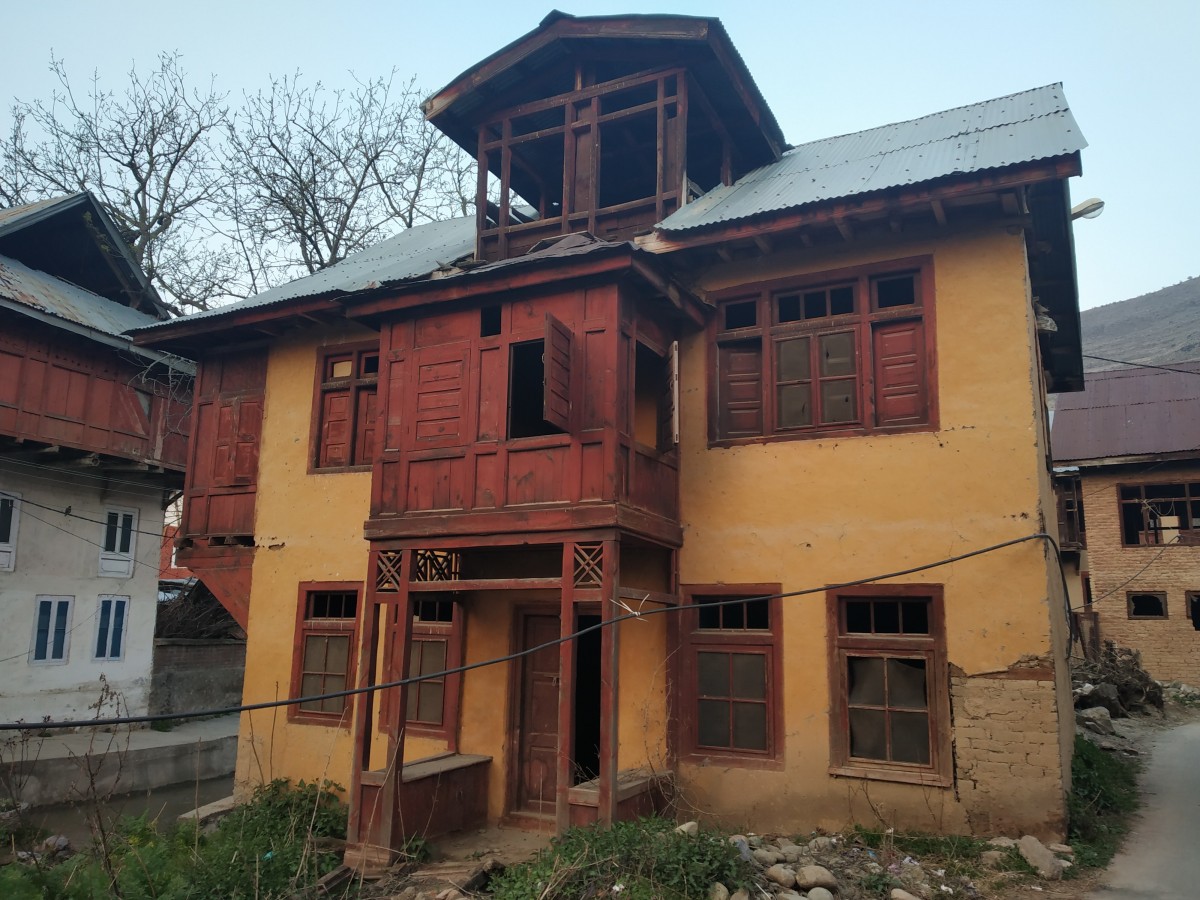 Neighbours say the doors and windows of the house owned by Prem Nath Gunjoo have been open for years. The house is filled with garbage and villagers believe it has become haunted. Gunjoo, who was a government employee in the health department, left the village in the 1990s and never returned. 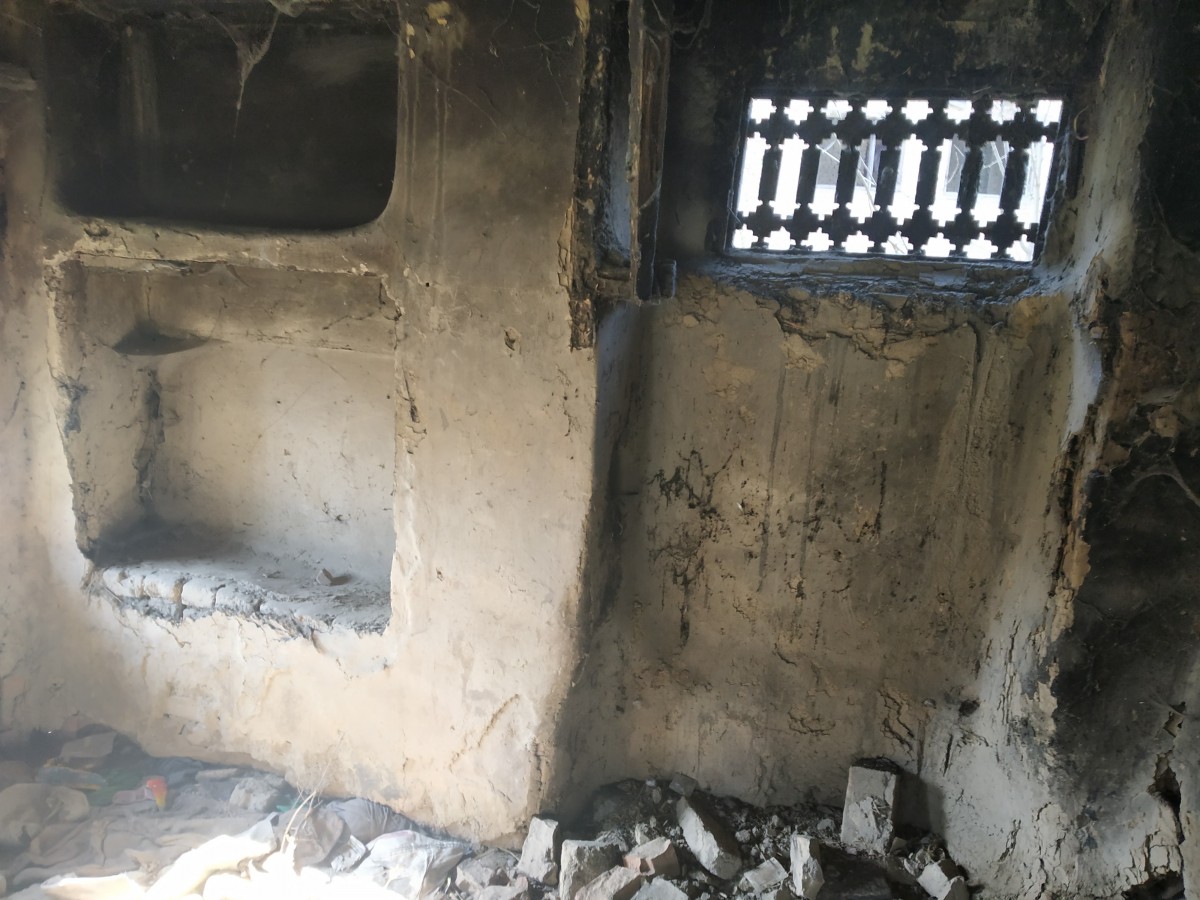 These traditional kitchen shelves were once decorated with utensils. 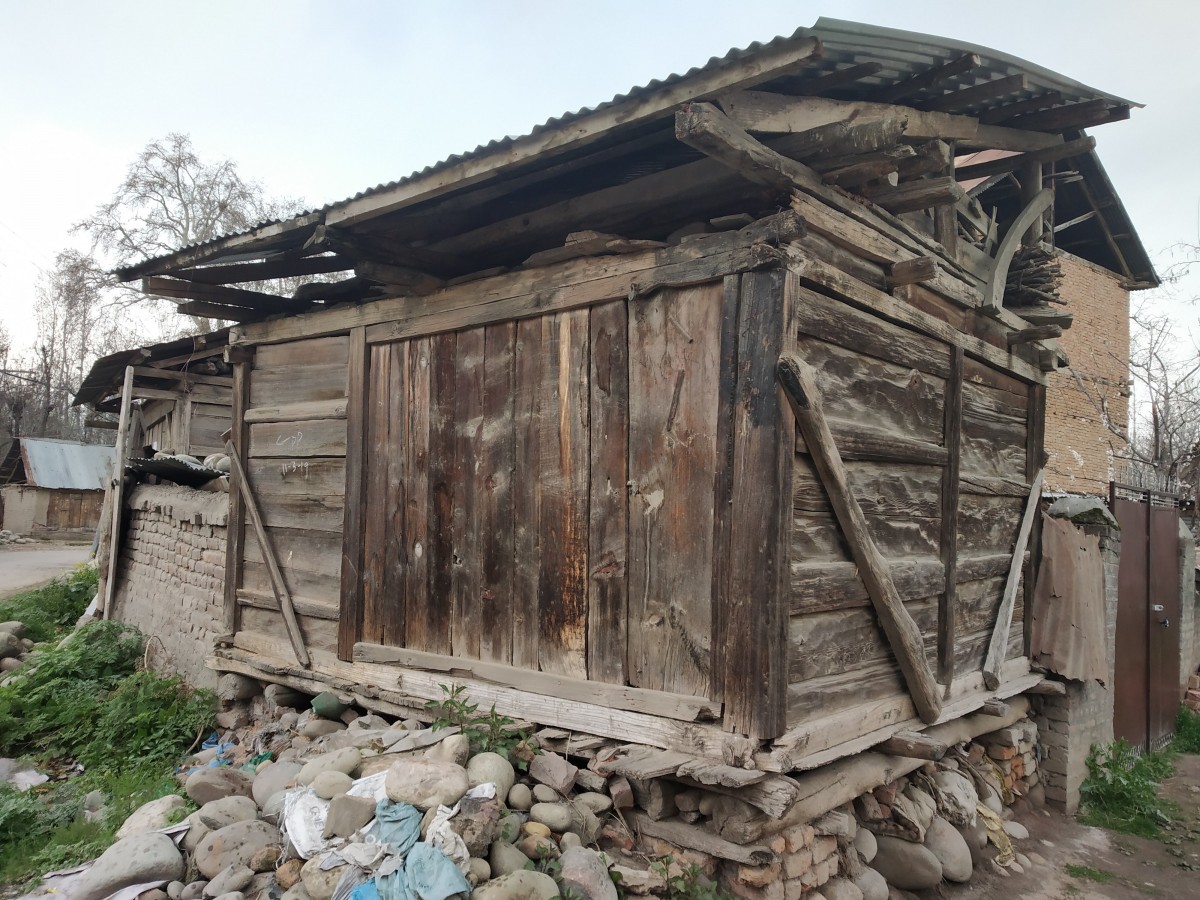 Locally known as ‘kuch’, this compact storeroom made of wood is used to stock rice grains in Kashmir. The kuch in the picture was once owned by Kashi Nath Koul. Kashi migrated from the Valley in the 1990s. After a few years he returned, but only to sell his property to his Muslim neighbour. 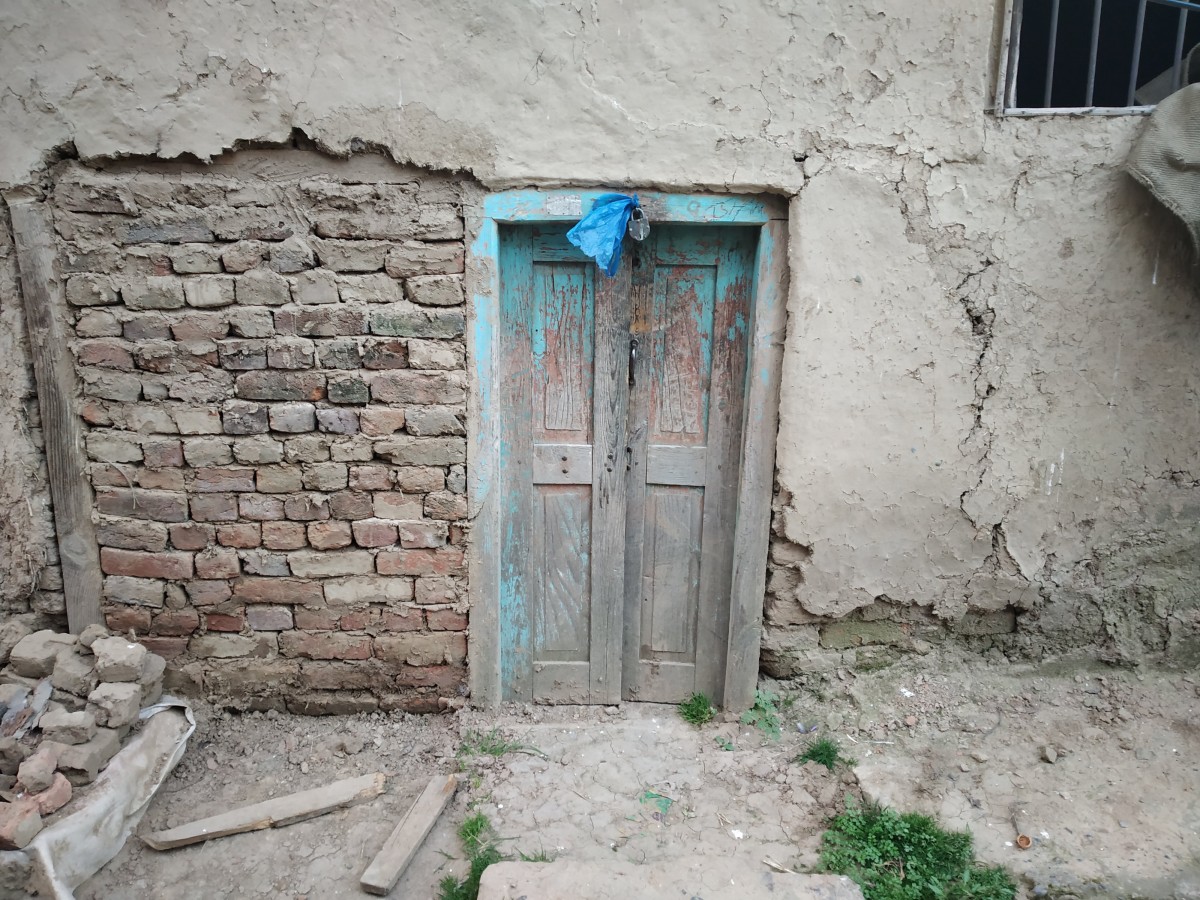 The traditional main door of this Kashmiri Hindu house was locked 29 years ago. 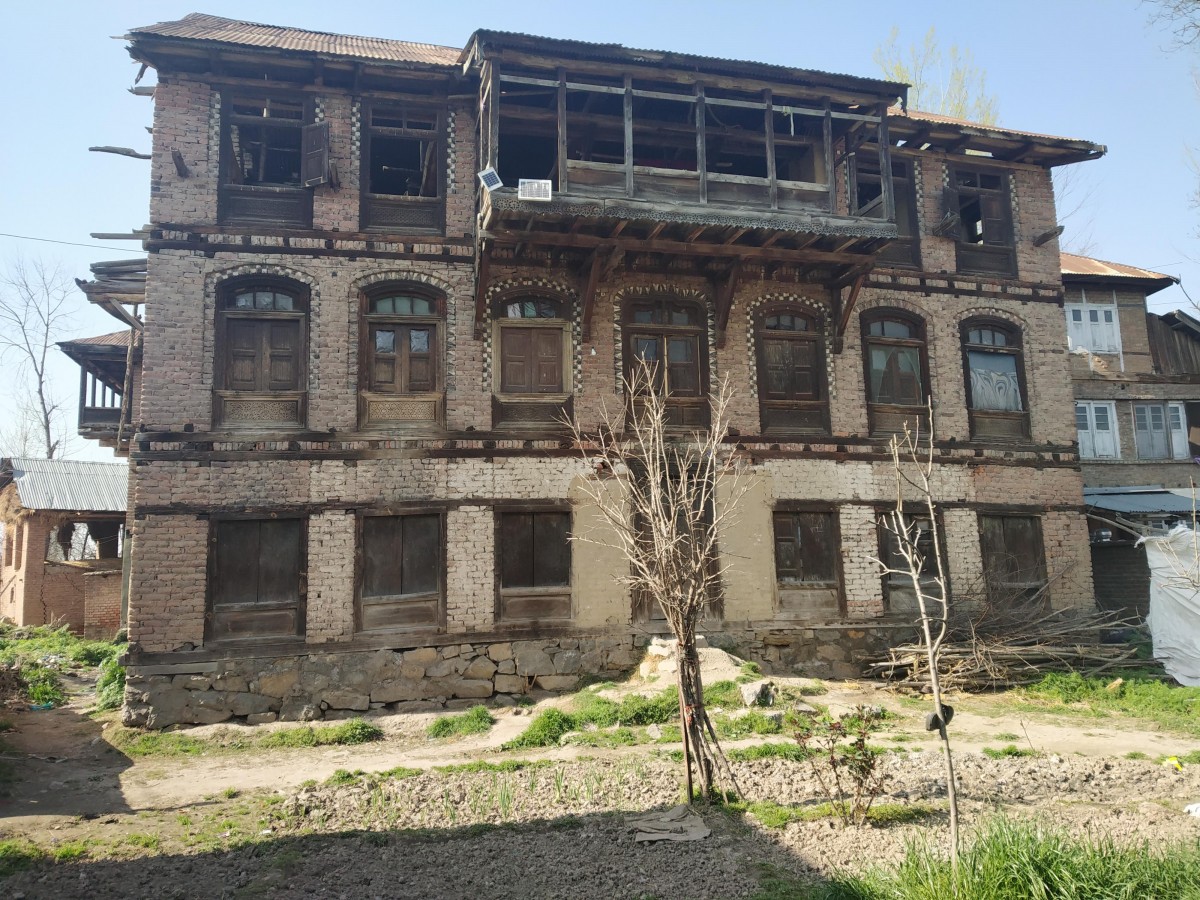 Some Pandit’s houses are still standing.

All photos by Aamir Ali Bhat.