Instead of the traditional models of family-owned, corporate-funded and controlled or advertising-driven newspapers, websites and TV channels, can we reimagine the media as a joint venture in the public sphere between journalists, readers and a concerned citizenry? One in which decisions over what to cover and how, who to hire and where to send a correspondent or photographer, are taken by editors on the basis of professional judgment, without worrying about what a proprietor or politician, official or advertiser might think or want.

In a democracy, this is the least that readers or viewers expect. And yet, the business model that underpins most Indian news media seldom allows editors the freedom they need. Worse, it has slowly eroded professional standards of reporting and contaminated the media ecosystem with toxic practices like rampant editorialising, paid news and ‘private treaties’. Increasingly, media houses are reluctant to spend money on news-gathering; and as they develop secondary business interests and ‘no go areas’ proliferate, their newsrooms suffer further collateral damage – especially as these interests often depend on proximity to politicians and bureaucrats. Is it any wonder that readers have begun to notice the erosion of professional standards, ethical breaches and fall in quality? They now feel shortchanged.

The founding premise of The Wire is this: if good journalism is to survive and thrive, it can only do so by being both editorially and financially independent. This means relying principally on contributions from readers and concerned citizens who have no interest other than to sustain a space for quality journalism.

As a publication, The Wire will be firmly committed to the public interest and democratic values. Apart from providing authoritative analysis and commentary, the aim, as our resources grow, is to build ourselves as a platform driven by good old-fashioned reporting on issues of national and international importance and interest. Being on the web also means using new media technologies to change the way stories are told. With data and interactive charts, video and audio as integral parts of the narrative structure when warranted.

We start today on a modest note, constrained not by our vision but by our resources. In the meantime, we make a simple appeal: read us, share and tweet our content, and send us your feedback.

How we are funded

From 2016 to 2020, the Independent and Public Spirited Media Foundation provided substantial financial support to the Foundation for Independent Journalism (FIJ) for the purpose of reporting and publishing stories of public interest. IPSMF does not take any legal or moral responsibility whatsoever for the content published by FIJ on their website thewire.in or on any of its other platforms.

Here is a breakdown of The Wire’s funding sources since 2015: 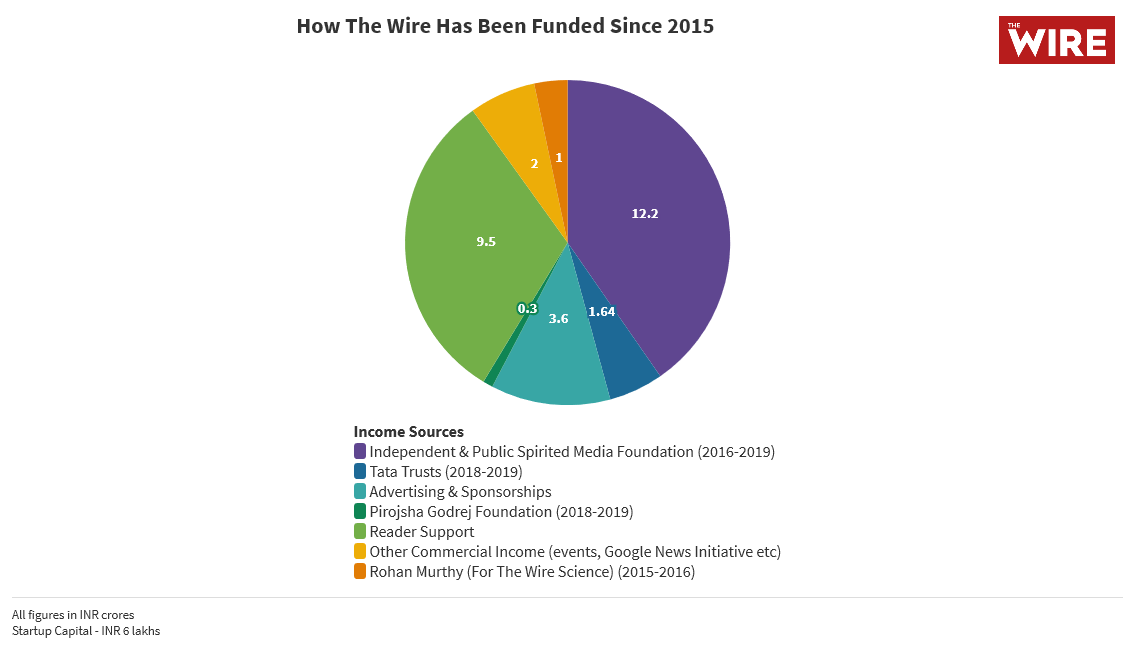 If you are an Indian citizen and wish to make a donation to The Wire please click here. If you prefer cheques, please make yours payable to the Foundation for Independent Journalism and mail it to:

The Wire is looking to expand its Audience Engagement team. For this we need a teammate with experience in journalism and managing social media accounts.

You will establish a vision for shaping and targeting our journalism for different social media platforms, and you will be responsible for understanding and developing new strategies, tools and workflows as those platforms evolve. This means you will grow our presence on Facebook, Twitter, Instagram, Reddit, chat apps and emerging platforms. Engaging our readers, monitoring on-site and off-platform conversations for story ideas and integrating readers’ contributions and insights into the daily edit meets would be vital.

You will also work with reporters and editors across the newsroom on how social media and readers’ voices can inform our journalism, both pre and post publishing.

This role will work weekends and evenings and is location agnostic.

- Developing and continuously refining the voice of The Wire on all our off-platform channels, exhibiting excellent news judgment and audience-sensitive framing

- Thorough understanding of all mainstream and some emerging social channels

The Wire is committed to a diverse and inclusive workforce. Achieving true diversity and inclusion is the right thing to do. Dalit, Adivasi, OBC and minority candidates are strongly encouraged to apply

The Wire is published in English, Hindi, Urdu and Marathi. In addition, The Wire publishes The Wire Science and LiveWire as standalone digital publications.

(For all enquiries, clarifications, questions or complaints about published content, story pitches and submissions, business- and employment- related queries at The Wire)

Pamela Philipose is The Wire’s ombudsperson (also known as public editor or reader’s editor), a position we created in July 2016 to add a new layer of transparency and accountability to our editorial functioning.

Philipose is a senior and highly regarded journalist with decades of experience as a reporter and editor at various newspapers, including, most recently, the Indian Express. She is not an employee of The Wire and will function independently of its editorial structure. Her mandate will be to examine and, where appropriate, investigate complaints and concerns that readers may have about its coverage.

The Wire undertakes to publish her views on its coverage without editorial interference.

The Wire is a founding member of Digipub News India Foundation, established in 2020 by a number of digital media organisations “with the intent to help ensure the creation of a healthy and robust news ecosystem for the digital age. The aim is to build a platform that represents digital news media.”

DIGIPUB has set up an internal committee to provide members with an addtional level of self-regulation. The committee consists of individuals with an unimpeachable public service record and accomplishments:

who owns the wire

The Wire commenced publication on May 11, 2015, and is run by the Foundation for Independent Journalism (FIJ), a not-for-profit company incorporated on September 16, 2015 under Section 8 of the Companies Act. The FIJ’s Corporate Identification Number is (CIN) U74140DL2015NPL285224. Its board of directors comprises M.K. Venu, Sidharth Bhatia and Siddharth Varadarajan.

The Wire believes that individuals who act as whistleblowers and speak out against corporate and government misconduct are essential players in uncovering wrongdoing, protecting public safety, and strengthening democracy.

We consider a “Whistleblower” to be any individual who has provided information to us about corporate misconduct, human rights abuse or any other threat or harm to the public interest in the context of a work-based relationship, whether it be in the public or private sector, which thereafter led us to publish reports based, at least in part, on the provided information.

The Wire recognizes the crucial importance of confidentiality to investigative journalism and reporting and will vigorously protect the information about the identities of confidential whistleblowers entrusted to it under any circumstance.

Email us at forthewire@proton.me and we will provide further directions.

contribute
To contribute an article to The Wire or enquire about syndication, please write to editorial@thewire.in
Follow Us