While the ruling AL party say the verdict against Zia proves no one can get away with corruption, BNP say it is a plot to keep her out of the national elections later this year. 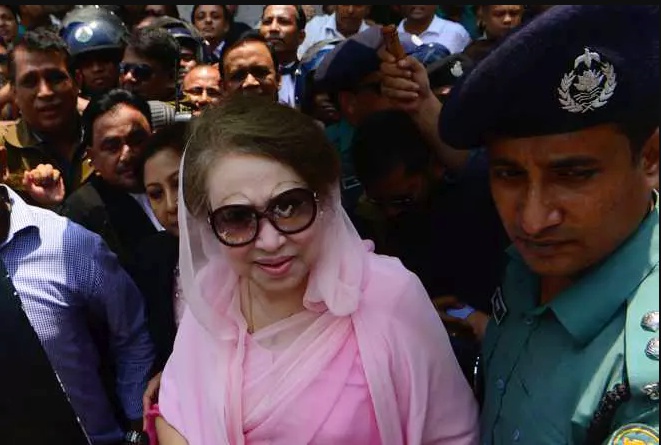 Dhaka: A five-year jail sentence by a special Dhaka court for former Bangladeshi Premier Khaleda Zia in a graft case involving Taka 2 crore ($0.25 million) is now at the centre of a new collision course in the country, pitting acceptance of corruption against democratic rights. Meanwhile, after the verdict, clashes broke out in major cities between Zia’s supporters and those of the ruling Awami League (AL).

The Bangladesh Nationalist Party (BNP) – which Khaleda Zia heads – has termed the verdict as part of the Awami League’s “plan to keep BNP out of election which, thus, would rob people of their voting rights”.

The verdict could bar Zia from contesting in the national polls scheduled for the end of the year. As per the country’s constitution, a convicted person serving over two years of jail term cannot take part in the national election.

BNP didn’t take part in the last election in 2014, as it wanted a non-partisan caretaker government to conduct the polls. Without the participation of one of the two major parties of Bangladesh, the other one, Awami League (AL), practically got a walkover, as voter turnout was a record low with more than half of the parliamentary seats going uncontested.

Now, sensing a looming defeat in the upcoming elections, AL has resorted to sending Zia to jail and keep the party away from the polls, so that it can implement the plan of establishing an authoritarian regime,  BNP has alleged.

BNP leaders and party lawyers representing Zia said the verdict was not based on the case’s merit. A day before the verdict, Zia held a press conference in the BNP party office, claiming that the ruling party leaders had been saying for a long time that she would have to face jail.

“It seems as if the ruling party, not the judge, fixed the verdict. I doubt whether any court will dare to ensure justice against the regime’s will,” said Zia.

Meanwhile, the AL said that the verdict had eventually served justice, after being delayed for long.

Addressing a rally in the southern city of Barishal on February 8 (the day when the verdict was delivered), Prime Minister Sheikh Hasina criticised Zia for corruption, instigating violence (in 2014, after the election), adding that the BNP  leader had “got what she deserved.”

“The throne of almighty Allah gets shaken when one carries out repression on people. Those who burnt people to death face such consequences. And that justice is being done,” she said.

Right after the verdict was delivered, law and parliamentary affairs minister Anisul Haque said, “The verdict proves no one is above the law.”

The verdict and the legal tangles

The case in point, the Zia Orphanage Trust case, accused Zia and five others including her son and BNP senior vice chairman Tarique Rahman of embezzling over Tk 21 million (US $252,000) from foreign donations intended for a charity named after former president Zia-ur Rahman, Zia’s husband and Rahman’s father.

Rahman, who now lives in London for the past nine years, was given a ten-year-term. He is BNP’s heir apparent and now that he too is convicted, the leadership of the party becomes uncertain. (However, reports late on Friday said Tarique Rahman had been declared acting chief of the BNP).

After the verdict, Zia was taken to the old Dhaka Central jail. The jail authorities had already renovated a special cell for her. Zia was allowed by the court to keep a personal help in the jail, and was granted the facilities meant for VIP prisoners.

According to some lawyers The Wire spoke to, Zia will have to stay in jail for at least three days. Her  lawyer will have to move the case on Sunday. But if getting the certified copy of the verdict is delayed, her bail procedure may be delayed.

Zia’s chief counsel Khandakar Mahbub Hossain termed the verdict as “dictated” and said “it failed to reflect the truth.”

“We will go to the higher court and file an appeal against this,” he said, hoping that Zia would receive bail promptly. Hossain said that verdicts delivered by the subordinate court are not final.

The filing of an appeal means that a verdict has been challenged and that the matter is yet to be resolved. This means the person convicted by the subordinate court will have the chance to participate in polls, he added.

Not only Zia, her party too is struggling as a number of its activists and leaders are bogged down with numerous cases. According to the statistics of the research wing of BNP,  after 2014 elections, a total of 78,323 cases have been filed, implicating 7,83,238 BNP leaders and activists. 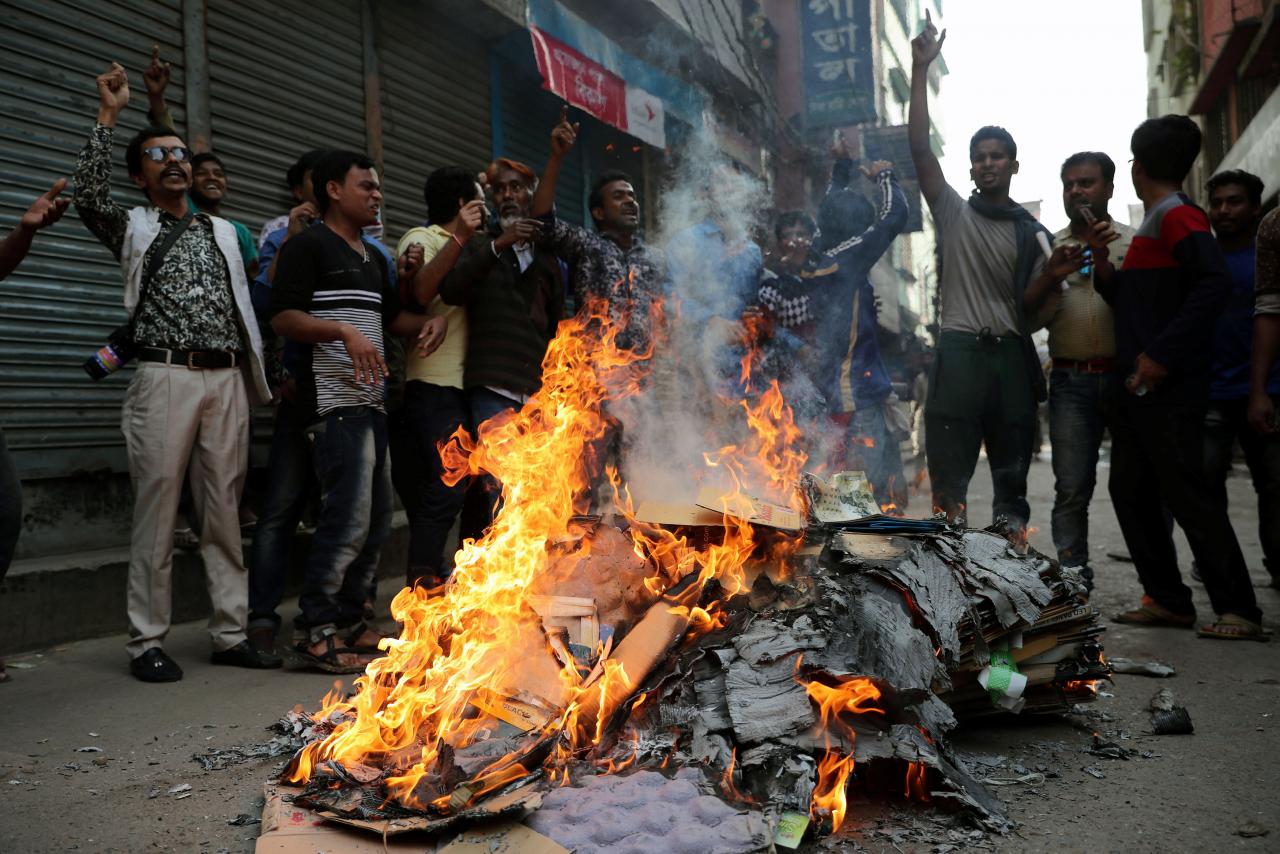 BNP supporters shout slogans as they set fire to posters during a protest in a street in Dhaka, Bangladesh on February 8, 2018. Credit: Reuters/Mohammad Ponir Hossain

After the verdict, BNP has declared its protest programme. The party, which has allegedly took a violent and destructive way to protest the uncontested 2014 election, says it will resort to peaceful protest against the verdict.

BNP secretary general Mirza Fokhrul Islam Alamgir said Zia earlier anticipated that she wouldn’t get justice and thus instructed the party leaders to prepare for all possible outcomes of the trial. “She specifically instructed us to not to undertake any programme that would hamper the lives of common people,” adding that “they [the AL government] have already detained more than 3,000 of our activists and leaders from various parts of the country.”

Ruhul Kabir Rizvi, BNP joint secretary general told The Wire that they were anticipating a bail for Zia by next week. “If this case is an act of political vengeance, then Madam [Zia] wouldn’t get bail. If that is the case then we will fix our next course of action.”

Political scientist professor Emajuddin Ahmed said the verdict had been timed to coincide with the election year to ensure the opposition sits it out. “I don’t think there will be any favourable outcome for BNP in the case.”

Criticising the government, Ahmed said the current Prime Minister had also been implicated in similar cases during the army-controlled caretaker government in 2007-2008, but those were all quashed once her party came to power in 2008.

He said BNP was out of power for the last 10 years and, in the meantime, AL, as a party, has gotten stronger. “It [AL] however may lose its popularity because of the oppression and widespread corruption. So, I believe if the people are given the voting right, AL will lose, and they know this. ”

“Under these circumstances, sending a former three-time prime minister and the main opposition leader to jail for not using the money in a trust fund named after her husband naturally raises a lot of questions,” he said.

Nazrul, however, believes this verdict could actually work  in BNP’s favour, if it can organise and participate in the election while Begum Zia is in prison, and if there is a fair election.

“BNP can capitalise on the sympathy for [Khaleda Zia’s] imprisonment. But I anticipate that the government will not let this happen,” he said, adding that the AL government would probably try to create factions within the BNP and intensify those divisions by way of persecution, intimidation and harassment.

“If that can be done and [the government] can lure a weak divided BNP to participate in the election, then the next election might once again be a very controversial election, where the AL might win. This will be really bad for Bangladesh’s democracy,” said Nazrul.