Bhimsen Joshi: A Hundred Years of the Extraordinary

The Pandit's 100th birth anniversary has just passed us by. He was truly a Bharat Ratna, a jewel whose lustre will never diminish.

Pandit Bhimsen Joshi. Photos: Stills from the Films Division documentary on the singer directed by Gulzar.

“…[I]f the only form of tradition, of handing down, consisted in following the ways of the immediate generation before us in a blind or timid adherence to is successes, “tradition” should positively be discouraged…Tradition is of a much wider significance. It cannot be inherited, and if you want it you must obtain it by great labour.

“It involves, in the first place, the historical sense, which we may call nearly indispensable…This historical sense, which is a sense of the timeless as well as of the temporal and of the timeless and of the temporal together, is what makes a writer traditional. And it is at the same time what makes a writer most acutely conscious of his place in time, of his own contemporaneity.”

Thus wrote T. S. Eliot in his celebrated essay Tradition and the Individual Talent. Although he wrote it in the context of poetry and poets, it applies equally to artistes in other fields.

Bhimsen Joshi’s life and work exemplify the truth of his words. He did not inherit tradition but obtained it by “great labour” and his life was an inspiring saga of the triumph of his spirit and indomitable will. It was an extraordinary life in every sense.

How extraordinary it was can be gauged from the fact that he was perhaps the only son in history whose biography was written by his father! 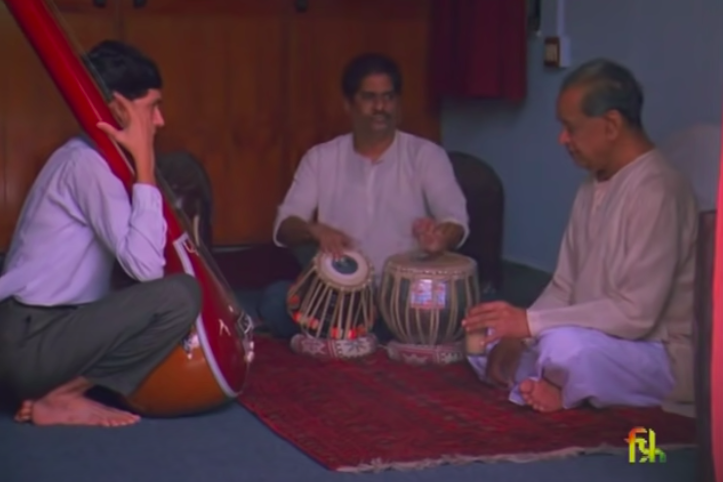 Pandit Bhimsen Joshi (right). Photo: A still from the Films Division documentary on the singer directed by Gulzar.

Bhimsen Joshi was born on February 4, 1922, in a family that lived in Dharwad district’s Gadag taluka. This was a day associated with the worship of the sun god and celebrated as Ratha Saptami. Little wonder that in his adult life, Bhimsen shone like the sun in the sky of Hindustani classical music.

His family had an environment of music and scholarship as his grandfather Bhimacharya was a well-known kirtankar (a singer of kirtans) and father Gururaj was a teacher armed with a Bachelor’s degree in education and a Master’s degree in languages. He authored a Kannada-English dictionary that was considered to be authoritative work. Bhimsen’s uncle Govindacharya was a noted Kannada writer, dramatist and publisher.

Bhimsen was a good student with a prodigious memory. However, his passion was music and he would, on his way back home from school, stop near a shop that sold gramophone records. The owner, to attract prospective buyers, would play them one after the other and a mesmerised Bhimsen would listen to them. His father arranged for his education in music but, unknown to him, a life of great struggle was waiting for his son.

Also read: On the Centenary of Bhimsen Joshi’s Birth, 10 Recordings to Remember Him By

One day, the 11-year-old boy listened to a record of Ustad Abdul Karim Khan, founder of the Kirana gharana, that had his famous Jhinjhoti thumri Piya Bin Nahi Aawat Chain and the Basant Khayal Phagwa Brij Dekhan Ko Chalo Ri. This was the moment of revelation for him and he decided that he had to learn to sing like the Ustad. The boy left without telling anybody and spent the next several years in struggle.

In his quest for music, he went many places including Pune, Gwalior and Jalandhar. In Gwalior, he was fortunate enough to evoke the kindness of the celebrated sarod maestro Ustad Hafiz Ali Khan, whose son Ustad Amjad Ali Khan is a noted sarod maestro at present.

The Ustad got him admitted in the Madhav Sangeet Vidyalaya where Bhimsen could get a free meal every day. He also taught him Marwa and Puriya in which he henceforth always excelled. In Jalandhar, Bhimsen met Pandit Vinayakrao Patwardhan, one of the famous disciples of Pandit Vishnu Digambar Paluskar, and he expressed surprise that Bhimsen had travelled so far in search of a guru. He advised him to learn from Pandit Sawai Gandharva, a senior disciple of Ustad Abdul Karim Khan, who lived in Kundgol, which was close to Gadag.

Bhimsen returned home and his much-relieved father took him to Sawai Gandharva, who agreed to teach him. He stayed in his guru’s house for five years. The famed Gangubai Hangal used to come to Kundgol by train in the morning and would leave in the evening. It was Bhimsen’s duty to accompany her to the railway station with a lantern in his hand every day. 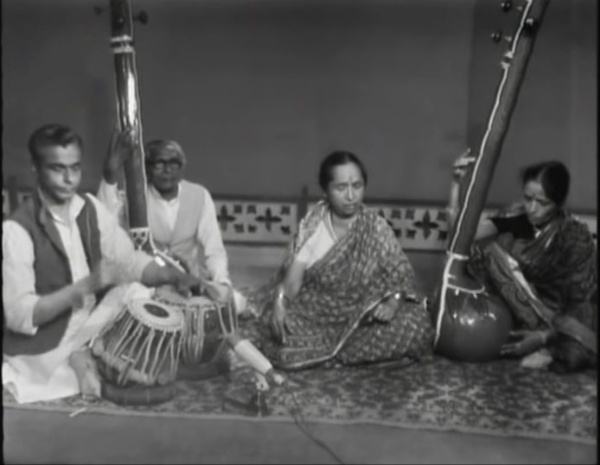 In one of his interviews, Bhimsen Joshi narrated an interesting incident. When he had made a name for himself as a Hindustani classical vocalist, Pahadi Sanyal, who was a famous actor-singer of Bengali films, came to listen to him. After the singing was over, he came to congratulate him. Bhimsen asked if he could recognise him. Sanyal said that he could not. Then Bhimsen asked him if he remembered a lad who worked in his house as a domestic help and whom he used to call Joshi. “I am that Joshi,” Bhimsen said with a smile, and Pahadi Sanyal was speechless.

Also read: When Classical Music Can Take the Listener to a State of Emotional Bliss and ‘Madness’

Bhimsen Joshi made many changes in the vocal style of Kirana gharana. He paid great attention to his taans and formed them after the taan patterns of Jaipur gharana stalwart Surshree Kesarbai Kerkar. Before him, Kirana gharana vocalists did not have much use for taans, certainly not for the kind of forceful and fast taans Bhimsen Joshi introduced. He also increased the pace of singing and his rendering of the Vilambit Khayal was not as vilambit or slow as that of the other representatives of his gharana.

He also stood out for the judicious and restrained use of sargam, the singing of notes instead of lyrics. In this context, his rendering of Khamaj Bhatiyar comes to mind where imaginative use of murkis and just a dash of sargam light up the performance and brings out in sharp relief the aesthetic beauty of a Bhimsen Joshi presentation.

About Guru Dutt’s films, it was said that songs in them were used in such a way that they carried the story of the film forward. The same could be said of the way Bhimsen Joshi made use of sargam, quite unlike many present-day vocalists who use sargam mindlessly and excessively, without making any musical statement.

His 100th birth anniversary has just passed us by. He was truly a Bharat Ratna, a jewel whose lustre will never diminish.