Tagore’s involvement with Swadeshi advertising had the atypical pattern of the ‘ours is better than yours’ – understandable in a market where everything is too new to be loved in itself, and easier to be pitted against a common enemy. 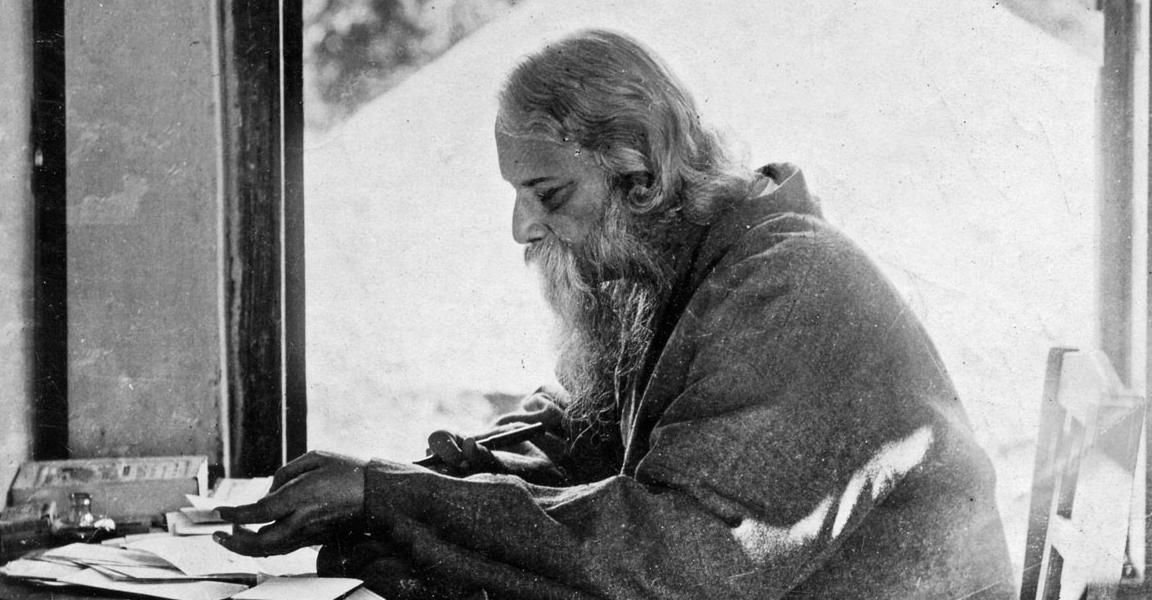 Sreemanti Sengupta
Culture
The Arts
09/May/2021

“To most of my generation, talking about Tagore does not come easy. Because to us Rabindranath was more than just a person. He was to us a compelling symbol, a symbol of India’s cultural regeneration.”

As yet another birth anniversary of the literary polymath whose skills continue to unravel like a universe within another comes by, one cannot help smirking at Rabindranath Tagore’s long and illustrious career as India’s first advertising brand ambassador. If you are experiencing hiccups from the slowly morphing image of our very own snowy-bearded bard into a six-pack clenching, soft-drink-grabbing hero of exceptional parkour talent, you are in for some more of those. With a somewhat accidental beginning in 1889 with promoting his own song album right up to his death in 1941, Tagore has been involved in numerous adverts. 90 is the number that expert and researcher Arun Kumar Roy, author of the book Rabindranath O Bijnapan, arrived at. Cosmetics to food products, books to medicines, the variety of brands he endorsed is comparable only to his choice of themes in songs and literature.

“Two trends can be identified of Rabindranath’s involvement and contribution to Indian advertising. One, where various business owners requested him to write or model for them, such as ‘Poyodhi Doi’ (curd) or ‘Kajol Kali’ (ink) and second, where companies like Bengal Chemical and many others used his quotations or song lyrics for their advertisements,” said Pabitra Sarkar, former vice-chancellor, Rabindra Bharati University in Kolkata.

The history of celebrity endorsements in world advertising is a colourful one, and one that charts more than 250 years today. India has always been partial to its icons, making them gods and demons in the same breath. Over time, it is tough to recall any business vertical in this country that hasn’t used a “pretty face” to influence buyer behaviour at some point in its advertising history. From sensible star personality-product pairings to those that are sufficiently random – both testifying the Indian advertisers’ utmost confidence on endorsements. That being said, endorsements have proven time and again that purchasers identify with the brand through the brand ambassador – transferring the admired qualities of their superstar unto the brand they are promoting.

Also read: The Relevance of Rabindranath Tagore’s Politics on His 158th Birth Anniversary

Rabindranath Tagore’s rise as India’s unchallenged advertising icon, comes as no surprise, especially if set in the context of an emerging Indian economy, where a number of brands were seeking to exploit the ‘Swadeshi’ environment for pitching their indigenously produced wares.

The Swadeshi movement, which gained momentum as a reaction to Lord Curzon’s decision to divide Bengal along communal lines in 1905, saw Tagore as a leading figure against the division. In this phase of tumult, where Tagore envisioned change would come with unity and education, he wrote songs of patriotism such as Banglar Maati Banglar Jol (Earth of Bengal, Water of Bengal) that bolstered the movements and also epitomised Hindu-Muslim unity. During this time, the British faced pecuniary loss and Indian industries got a chance to flourish in an environment made favourable by nationalist zeal. Among those who benefitted are Prafulla Chandra Ray’s Bengal Chemicals, J.N. Tata’s Iron and Steel Company, the Bengal Luxmi Cotton Mills and the Mohini Mill, newly established banks, insurance companies, ship-building industries and various other factories.

Many emerging Indian companies understood that competition was extreme within and without and gauged that the ‘Swadeshi’ tag could be used to their advantage to effectively tale on foreign products. And who better to strengthen their brand proposition than the country’s cultural ambassador, the perfect face for a brand that oozes Indian pride and world-class quality?

The legendary Hemen Bose-Tagore pairing is worth a revisit. Remembered distinctly for Kuntaline Hair Oil and literary award, the catchy jingle Tagore wrote for him is an absolute delight: ‘Kesha Makho Kuntaline/ Rumaletey Delkhosh, Paney Khao Tambulin, Dhonno Hok H Bose’ (‘Apply Kuntaline to your hair, Delkhosh in your handkerchief, Tambulin in your betel and bring fulfillment to H Bose’).

Bose launched the Kuntaline Magazine 1896 and later introduced a literary award as a clever branding tool for his line of products. Writers were invited to submit stories and win a cash prize. The catch? They had to mention ‘Kuntaline Hair Oil’ or ‘Delkhosh Perfume’ in the story. H. Bose maintained a strict Swadeshi stance, disqualifying the stories that emulated European literature. He used Tagore liberally in his advertisements along with other nationalist icons such as Surendranath Banerjea and Lala Lajpat Rai, and did not shy away from openly calling out the users of foreign products as ‘lacking self-respect’.

The Godrej No. 2 Soap story is a dream made in ‘moment marketing’ heaven. In 1919, Godrej launched India’s first vegetable soap, made with organic elements and free from animal lard, which was an ingredient in all European soaps. Due to his ingenious new technology, Godrej was able to get in the good books with sensitive Indian masses who were at that moment averse not only to European meat-eating habits but just about everything foreign. The brand gained endorsement from Rabindranath Tagore who featured in an advert along with the words, “I know of no foreign soaps better than Godrej’s and I will make a point of using it.” Annie Besant and Dr. C. Rajagopalachary also backed it, whereas Mahatma Gandhi, who was a direct beneficiary of Godrej’s Swadeshi-fuelled generosity, declined his support towards a competitive brand.

Tagore’s involvement with Swadeshi advertising had the atypical pattern of the ‘ours is better than yours’ – understandable in a market where everything is too new to be loved in itself, and easier to be pitted against a common enemy. For Kajol Kali, he writes that the ink is no inferior to any European ink, praises Dwarkin & Son’s flute saying that it is more suitable for Indian music than foreign flutes; and compliments sculptor Kartik Pal’s work on his statue as superior to the work of Europeans and Americans who wore him out with long hours of posing.

Why was Tagore doing so many advertisements? Sarkar feels that though the reasons for his motivation are not clear, some of the adverts may have been driven by Swadeshi sympathies, but not all. The fact that the poet featured in foreign products Cadbury Bournvita, Bata shoe, and Lipton Tea’s commercials, point at other prosaic and necessary interests. Sandip Dutta, founder, and secretary, Little Magazine Library and Research Centre, Kolkata, says: “In 1927, Cadbury Bournvita took out full-page ads in Deepali Patrika that used both the poet and famous actresses of the era as models. In 1941, he gave his sanction to an advertisement that was published in Prabashi Patrika for Homeopathic Medicine (claiming he is a beneficiary of the same) that cured madness… it is unlikely he used these products, and therefore used them as a source of earning, possibly towards the development of Visva-Bharati.” 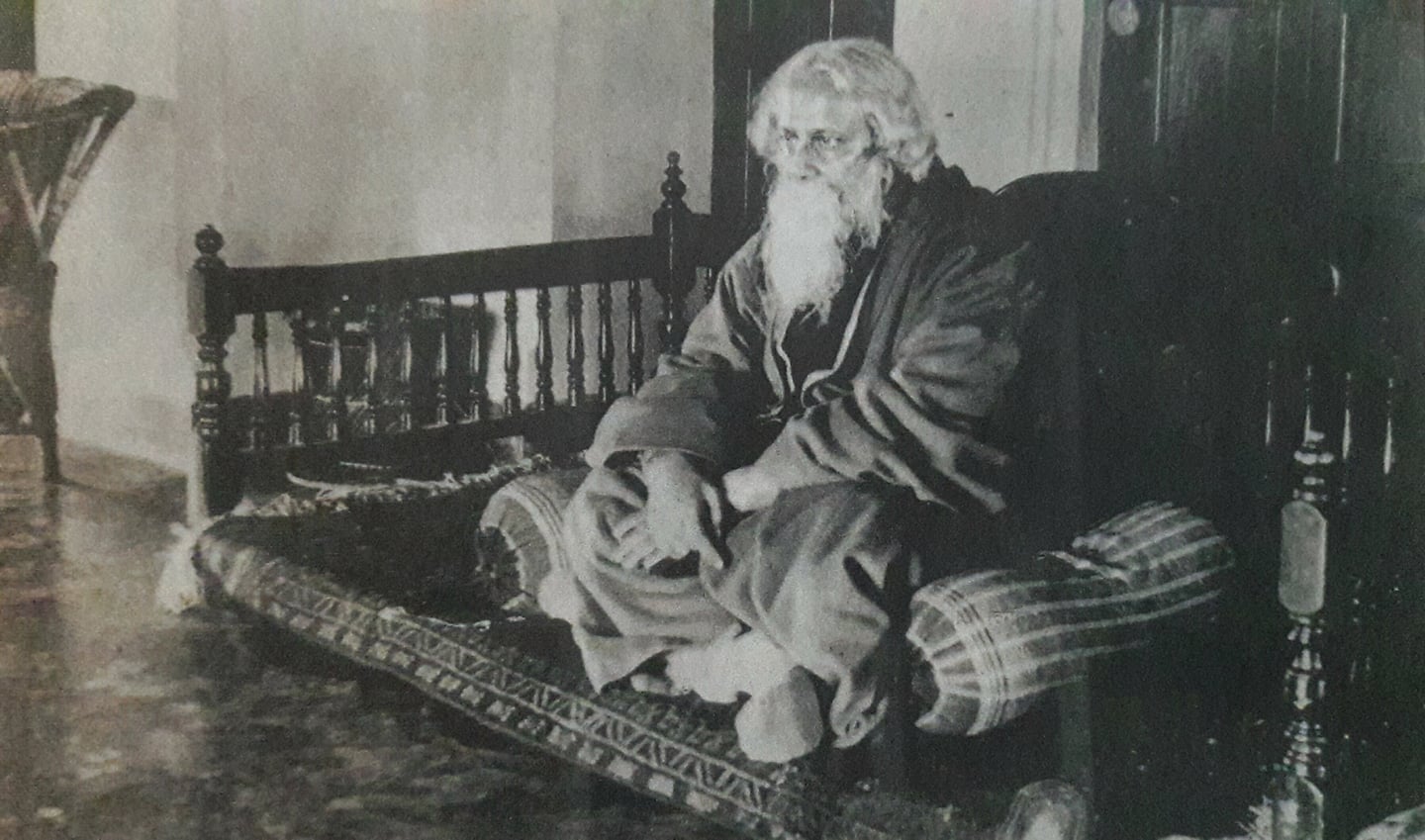 In her 1981 memoir, titled Jayashree-r Adiparba, freedom fighter and women’s rights’ activist Shakuntala Roy recounted a visit to Tagore in Kolkata in search of a poem or story for publication in the magazine Jayashree. Too tired and yet unwilling to send her back empty-handed, Tagore offered her a lot of Radium Snow powder, saying that they were of no use to him. When Roy and her companions expressed surprise, Tagore said that it doesn’t matter if he used them or not, it’s alright if advertising for them helped fill his ‘begging bowl’.

According to Prabhat Kumar Mukhopadhyay’s biography of Tagore, the Bard took out his ‘begging bowl’ to raise funds for Visva Bharati, a task for which he accepted more invitations than he would have liked to give speeches in different parts of India and the world.

Tagore grew disillusioned with the extremist form of the nationalist movement that had taken on a form that was narrow, “xenophobic, chauvinistic” around 1908 when he wrote to friend Aurobindo Mohan Bose, saying, “Patriotism cannot be our final spiritual center, I will never allow patriotism to triumph over humanity.”

Tagore’s 1925 essay, Cult of the Charkha, severely criticised the Swadeshi movement and Gandhi’s idea of ‘charkha spinning’ was a means to achieve independence. “A nation,” he wrote during this period, “… is that aspect which a whole population assumes when organized for a mechanical purpose”, a purpose often associated with a “selfishness” that “can be a grandly magnified form” of personal selfishness.

On his 160th birth anniversary, Rabindranath Tagore’s expansive advertising career makes his unimaginable genius almost conceivable, his superhuman stature almost one with common limitations of money, smiling at us from creams and soaps, and claiming the ridiculous. At last, our God has landed!