… and with that, dark matter is not far behind. 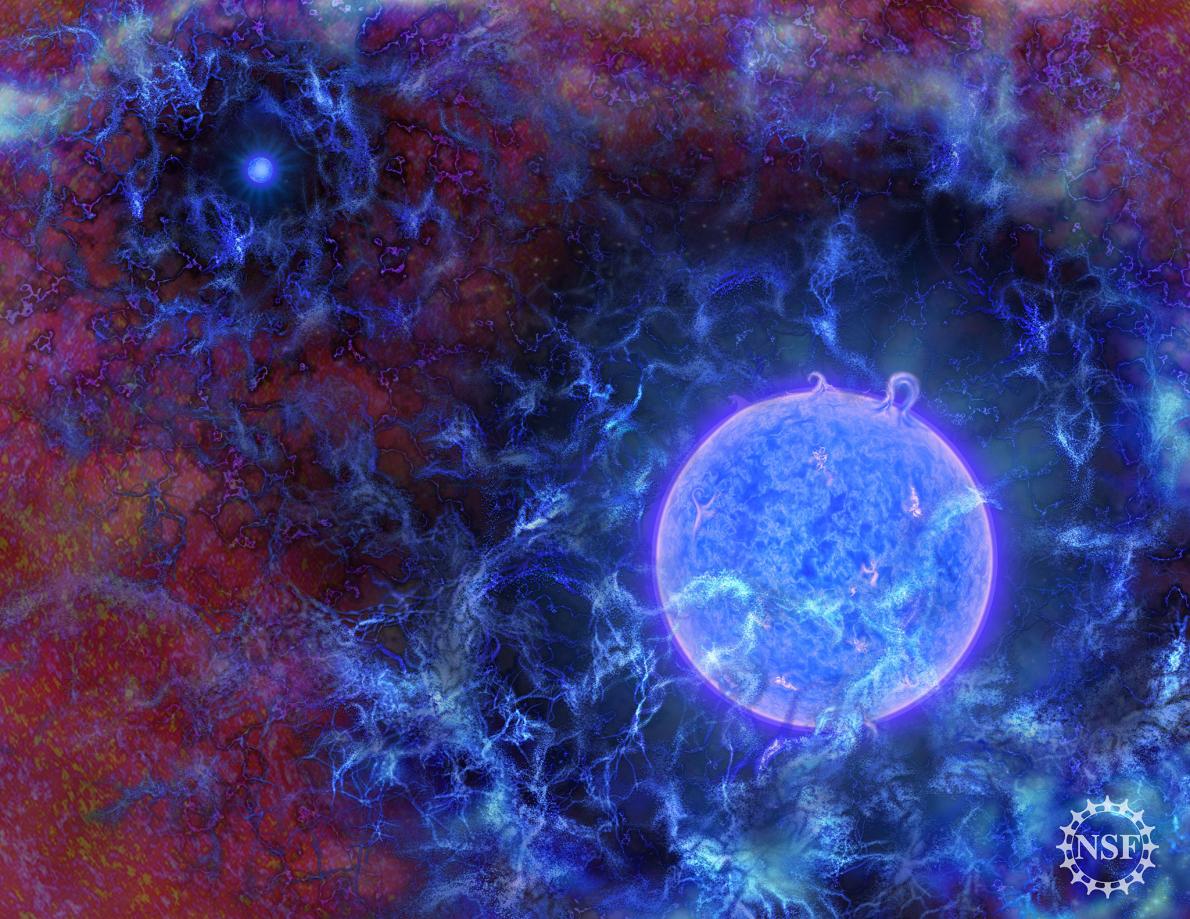 An artist's impression of the universe's first stars, embedded in a sea of gas, with the cosmic microwave background radiation depicted along the edges. Credit: N.R. Fuller, National Science Foundation

Some 380,000 years after the Big Bang birthed the known universe, the first atoms formed. These were mostly of hydrogen and helium, which went on to fill all of space. Then, about 200 million years later, the first stars were born. This was the ‘cosmic dawn’.

These stars would have been surrounded by so much hydrogen that all their light would have been absorbed by the gas. Unlike some stars we see today, whose light has traveled for billions of years to us, we can’t find the ancient stars at all even if we looked. But because all their starlight was trapped by the abundant hydrogen, the key is to study the gas instead.

This isn’t straightforward. How do we look for hydrogen from the cosmic dawn, from ~13.5 billion years ago?

The answer lies with yet another relic from the past: the cosmic microwave background (CMB).

The Big Bang suffused the universe with electromagnetic radiation. It has persisted to this day and currently fills the universe. The space between the stars might seem empty to our naked eyes but is actually abuzz with particles and energy, in the form of dust, gases and radiation of various frequencies. The CMB is a part of this mess; its presence can be picked up as a faint signal by microwave antennae.

The hydrogen surrounding the earliest stars also absorbed some of the photons of the CMB radiation, along with photons from the early stars, and became more thermally energised. These hydrogen atoms radiate the absorbed energy back into the universe in the radio part of the spectrum.

However, radio-frequency waves are also emitted by other sources. Humans use this part of the spectrum for communication. The Milky Way galaxy itself has various sources of radio, ranging from noise emitted by the Sun and Jupiter to the very first detected radio signal from space, the supermassive black hole at the centre of our galaxy, as well as other dense rotating objects, ionising gas, etc.

Further, the universe’s expansion also stretches out the hydrogen’s radio waves over time, making them blend into the background and harder to detect.

So we need instruments powerful and sensitive enough to pierce through this cackle of emissions and pick up on the weak primordial hydrogen. And this is what a group of five astronomers from the US and Chile did.

They set up an array of three radio telescopes, called Experiment to Detect the Global Epoch of Reionisation Signature (EDGES), in a remote region of the Western Australian desert. The telescopes were the size of coffee tables and had been calibrated specifically to observe hydrogen rich in absorbed microwave radiation. This hydrogen’s past can be understood by studying all the electromagnetic energy its atoms absorb, called the absorption spectrum. And it has a unique pattern in the part of the spectrum corresponding to the cosmic dawn.

After 12 years of searching, the EDGES team reported last week that they had finally found their quarry: a star born barely 180 million years old after the Big Bang.

“We have not seen any direct evidence for the first generation of stars yet, so this [finding] will hopefully lead to studies of the deep history of the universe, when it was very young,” Abhijeet Borkar, a postdoctoral researcher at the astronomy institute of the Czech Academy of Sciences, Prague, told The Wire.

The EDGES result also offered a surprise: the signal they’d recorded was more than twice as strong as what they were expecting. In other words,  the hydrogen was colder than it should have been, losing heat to something else around it that was even cooler.

The only thing that could’ve been cooler than the hydrogen over 13 billion years ago was dark matter.

This elusive form of matter is called ‘dark’ because it doesn’t interact with electromagnetic radiation – a.k.a. light; it interacts with other matter only through gravity.

Although it hasn’t been directly detected yet, many astrophysicists believe it must exist to explain why stars at the outer rims of galaxies are going around the galactic centre faster than they should be. Without dark matter, these galaxies haven’t been found to contain the amount of normal matter necessary to hold the stars in their giant orbits.

We’ve never observed dark matter interact with hydrogen gas. But if the EDGES result holds up, then the primordial hydrogen could have lost some of its heat to dark matter. Ergo, dark matter can exchange energy with ‘normal’ matter, which in turn means it can also transform into normal matter (and thus radiation) through the exchange of such energy. In sum: we can hope to detect particles of dark matter one day.

Of course, given the extraordinariness of the EDGES result, it has been met with some skepticism as well. For example, while the team has said their instruments were calibrated accurately, astrophysicists think it me be worthwhile to look again.

My concern is that the spectral feature in question may be systematic imprinted by their instrument. The beam of their telescope changes with frequency and can pick up more or less of the bright synchrotron emission from our galaxy. pic.twitter.com/zL7b0I12O4

One way to confirm the EDGES result is to replicate it. There are several instruments that can do this. The Hydrogen Epoch of Reionisation Array in South Africa has been looking for this signal. The Giant Metrewave Radio Telescope operated by the National Centre for Radio Astrophysics, Pune, has attempted to make these observations in the past and is planning more in the future, according to the Astronomical Society of India. The Low-Frequency Array in the Netherlands is also capable of detecting this signal.

The Raman Research Institute, Bengaluru, has been studying the signal, its evolution and how best astrophysicists can get a fix on it. “If it comes out to be a true detection, it will be fantastic,” Borkar said.

Until then, we’ll hang on to the champagne.

Sandhya Ramesh is a science writer with a focus on astronomy, earth science and all cool things space. She tweets about them at @sandygrains.