Surviving in the Time of Lockdown: Evidence from a Rapid Assessment in Bihar

An assessment from the source districts which witness high rates of out-migration in search of livelihoods are faring in the time of lockdown.

Migrant workers with their faces covered and carrying their belongings, walk along a railway track to return to their home state of eastern Bihar, during an extended nationwide lockdown to slow the spread of the coronavirus disease (COVID-19), in Ghaziabad, in the outskirts of New Delhi, India, May 13, 2020. Photo: Reuters/Adnan Abidi

For several weeks now, our television and mobile screens, newspapers and conversations have been dominated by the migrant crisis, and rightly so. We are witnessing one of the largest mass exoduses in the history of this country, one that has been triggered by an invisible entity but has made very visible the rot in our cities and our society.

As people struggle to deal with the loss of incomes and livelihoods along with the rising threat of the disease, our cities have failed to provide even a modicum of protection and solace to the most marginalised populations. Further, in the absence of earnings and social security and unable to meet their basic requirements, when migrant workers attempted to move back to their hometowns, they were offered no support. Instead, they were met with apathy, violence and a flurry of confusing bureaucratic pronouncements, adding insult to injury. Even the second tranche of the fiscal stimulus package announced on May 15 has little to offer to poor households, migrant workers, farmers, landless agricultural labour and daily wage workers.

Over the past couple of months, various surveys have highlighted the quandary of informal workers, especially migrant workers, in both urban and rural areas and the level of economic hardship and distress that they are facing. However, less is known about how the source districts which witness high rates of out-migration in search of livelihoods are faring in the time of lockdown. As reverse migration to these districts takes place in massive numbers, where distress factors presumably contributed to their decision to move out either seasonally or permanently, the arena of enquiry and response also needs to expand. In this context, ActionAid Association undertook a rapid assessment of the situation of 177 returnee migrant workers in 15 districts in Bihar between May 9 and 10. These 15 source districts account for 63% of out-migration of workers from Bihar, according to the 2011 Census. The survey was conducted in some cases through personal visits while providing food and other relief, but mainly through telephonic interviews. This assessment is part of ActionAid’s broader effort to undertake a longitudinal study in more than 18 states of India to understand and document the disruptions, vulnerabilities and coping mechanisms of workers in the informal sector and inform policymaking.

The rapid assessment looked at the impact of the pandemic induced lockdown on work and working conditions of precarious informal workers, with a focus on their location of work, migration, livelihoods, income, consumption, indebtedness, social security, access to welfare measures, housing, and legal entitlements.

Out of 177 respondents, 96% said they had migrated to urban cities in other states in their last employment prior to the lockdown. Around 82% of respondents lost their jobs and returned to their home districts after the lockdown was announced. Around 66% of the migrants returned home with no wages, while 14% received full wages and 21% received partial wages.

As a result of the widespread job loss, more than 60% of the respondents have reported that the income loss since they were last employed is in the range of Rs 4,300 to Rs 7,600. The average per worker loss of income is around Rs 6,400 per month.

Figure 2: Wages received at the time of announcement of lockdown

Stranded in cities amidst the crisis

The returning migrant workers reported that they were stranded in their destination cities on an average of 18 days before they could journey back to their home districts. During the time that they were stranded, many of them had to vacate their housing, including rental housing and worksites. Almost 96% of the respondents had to vacate their homes in destination cities. This was due to forced eviction by the landlord (28%), loss of job (26%), closure of factory (23%) and inability to pay the house rent due to loss of livelihood (19%). The remaining 4% had returned home prior to the announcement of the lockdown.

The rapid assessment also finds that despite unleashing a slew of relief measures, the destination states are grappling to ensure its effective coverage to all stranded workers during the lockdown. On their return journey, 85% of the workers did not receive any form of assistance (either for travel/ food/ housing) from the government and the remaining 15% of workers reported to have received at least food assistance in their destination states. Approximately 87% of the respondents incurred travel expenses for their return journey. The reported amounts were in the range of Rs 1,200 to Rs 7,600. The average money spent on the return journey was Rs 2,800 per person (excluding the amount spent on food consumption while travelling). Figure 3: Reasons for vacating home in the destination state

During the lockdown period, 59% of the workers reported that they were unable to meet their daily family expenses since they have lost their sources of livelihood. Due to the lack of income, more than 50% of workers reported that they reduced their food consumption to once in a day. There is also a massive decline in the availability of water in the source state. Around 71% of respondents said that they used to have access to sufficient water before the lockdown, but only 38% reported so during the lockdown. These aspects are extremely worrying as access to nutrition and water are critical to boosting immunity and maintaining hygiene to fight the pandemic, but people’s vulnerability to COVID-19 and other diseases is increasing as their access to food and water is falling. 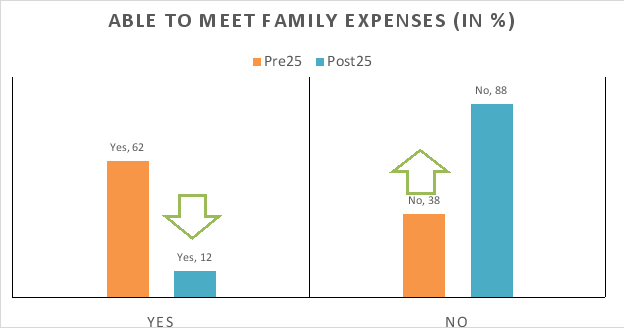 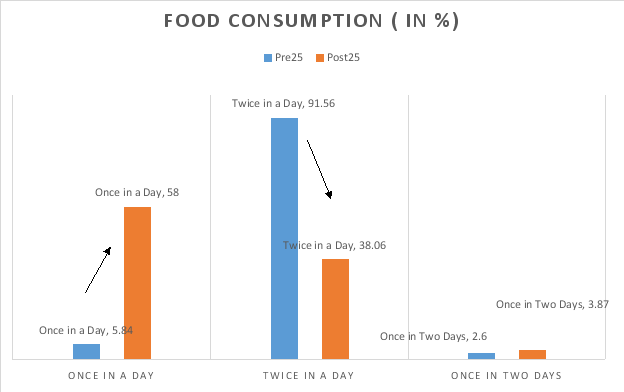 Surge in indebtedness and drain on household savings

As compared to the pre-lockdown financial health of households, the percentage of workers who consider their savings to be sufficient has dropped steeply from 48% to 1%, exacerbating their financial insecurity. Many of these workers continue to depend majorly on their meagre savings currently, but it is uncertain how long they would be able to do so.

There is a substantial rise in the level of indebtedness in the lockdown period. Prior to the lockdown, approximately 40% of the respondents reported an average debt of Rs 53,000 per person. However, in the lockdown period, the intensity of indebtedness has been exacerbated for 68% of the respondents. The debt amount ranges from Rs 40,000 to Rs 2,80,000. The rise in indebtedness has been reported on account to household expenses, health emergencies, other emergency expenses due to the lockdown, and to meet expenses related to agriculture such as taking land on lease (batai) and buying fertilizers/inputs etc for the upcoming kharif season. Figure 6: Status of indebtedness during the lockdown Figure 7: Reasons for not availing government schemes at the time of lockdown.

The extent of devastation in the aftermath of the COVID-19 lockdown is evident. That it has deepened systemic inequalities and deprivations is also widely recognised. The policy response needs to not only be willing to tackle structural issues but have workers’ voices and rights at its core – what do workers think recovery or how ‘re-building’ should look like; how do they reimagine the structures that have trapped them in cycles of debt and poverty. The state has so far been unable to respond to the migrant crisis because it has been complicit in the erasure of migrant workers from our statistics and our consciousness, and a worker-centric response would be the first step to regaining their trust and moving forward.

The authors are part of the team for ActionAid Association’s Study on “Workers in the Time of Covid-19” covering more than 18 states and more than 8000 migrant and other informal workers.