The Save Lakshadweep Forum has said that the daylong protest against administrator Praful Khoda's decisions on June 7 could be one of the first times the peaceful islands have stirred unitedly. Women and children from Lakshadweep pose during the protest called by Save Lakshadweep Forum, on June 07, 2021. Photo: By arrangement.

The Union Territory saw a near complete shutdown in response to a call by the ‘Save Lakshadweep’ Forum, a joint action council that is leading the protests against Patel.

In addition to people native to Lakshadweep – living in the mainland and abroad – many Kerala residents also fasted in solidarity, according to organisers.

The call for the Monday protest was the first major announcement by the Save Lakshadweep Forum, which was formed in late May. The Forum has demanded both the removal of Patel as the administrator and the repeal of all the contentious measures taken by his administration. The joint platform has leaders of various political parties in Lakshadweep, including Congress, Nationalist Congress Party, Janata Dal (United), Left parties and also Bharatiya Janata Party as its members. The Forum has a central committee and island-wise sub committees. A legal cell has also been formed under the Forum.

Also watch | Evictions, Bans and the Goonda Act: What Is Happening in Lakshadweep?

The Save Lakshadweep Forum was formed amid growing concern regarding various unprecedented and controversial decisions taken by the current administration, including four draft laws and a number of executive orders. 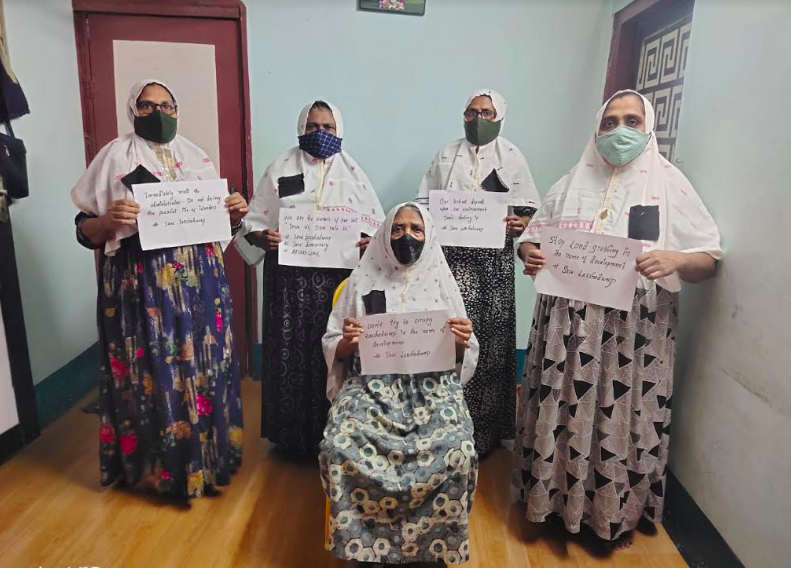 Women from Lakshadweep pose during the protest called by Save Lakshadweep Forum, on June 07, 2021. Photo: By arrangement.

Various other administrative steps, such as closing of local dairy farms, demolition of fisher folks’ and coconut farmers’ shelters, and elimination of hundreds of jobs has led locals in Lakshadweep, who have largely been peaceful, to be up in arms.

Dr. Sadiq, the coordinator of Save Lakshadweep Forum, said Monday’s protest was successful and also the “first time in history” that people in Lakshadweep displayed such unity for a cause.

“We could bring the people under one platform. This shows the seriousness of the issue,” he added.

Abdul Khader, the chairperson of village panchayat in Kavaratti, the capital island, said the protest was “very successful” in the island. “Everyone, including women, children and the elderly participated and fasted,” said Khader, a Congress leader. 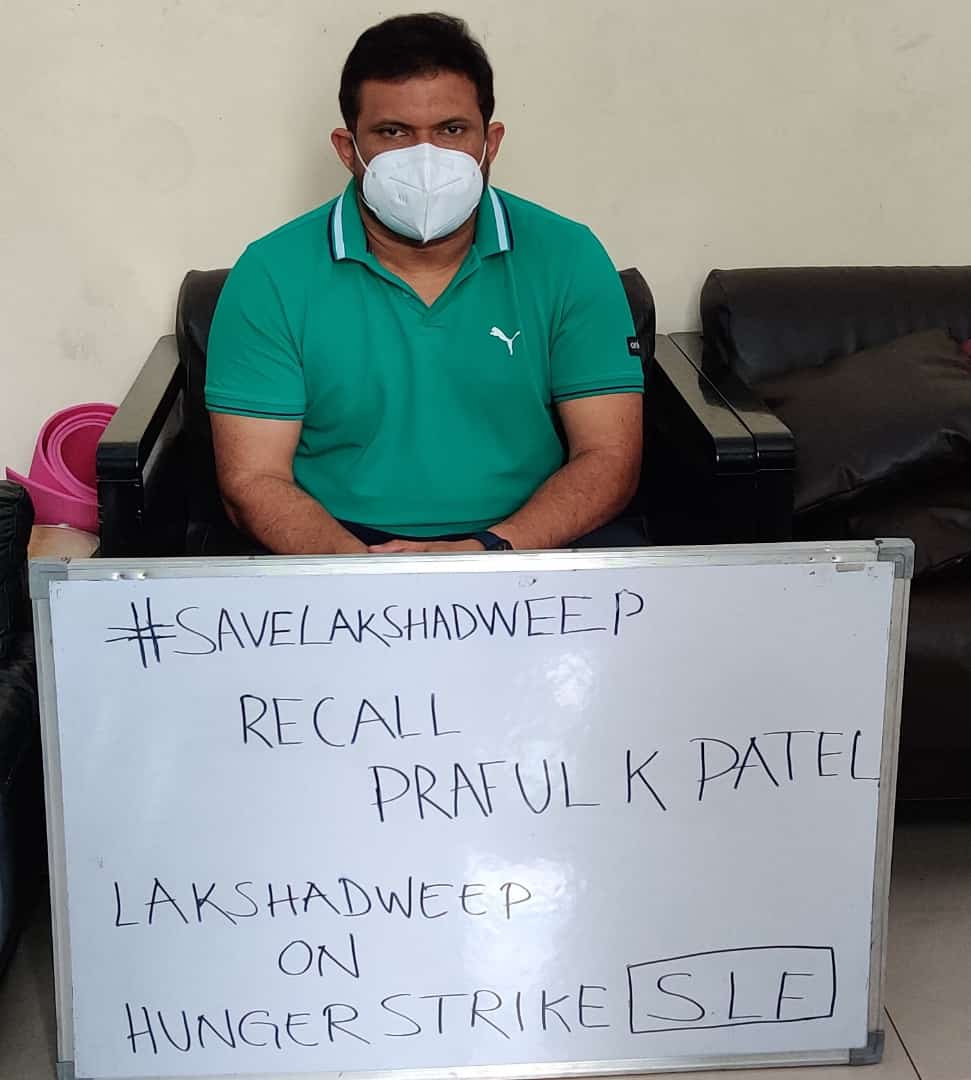 Mohammed Faizal P.P., the Lok Sabha member from Lakshadweep and a leader of the Save Lakshadweep Forum, said people from all the 10 islands participated in the protest.

He said the response to the protest call was “overwhelming”. “This is the first time in its history that people of Lakshadweep have participated in such a widespread, joint protest. People from all walks of life, from every political party took part in it,” he said.

He said the Centre should remove Praful Patel as the administrator and appoint someone “who understands local sentiments” in the post. He also said New Delhi should withdraw all the contentious steps the Patel administration has taken, irrespective of whether they have been already implemented in the islands or are submitted for the Centre’s approval.

‘We’re helpless; they’re determined to go ahead with agenda’

Many in Lakshadweep believe that the recent and controversial decisions of the Patel administration were inspired by a combination factors, which will in turn make resistance a “long-term process”, they feel.

For Alif Jaleel, a young sociologist from Lakshadweep, the current crisis emerged because, among other reasons, the administration wants to “grab” people’s land. He said the administration’s excuse of development is meaningless, as people in Lakshadweep are happy with their traditional, eco-friendly and simple life style. “The only issue we have is the lack of sufficient healthcare facilities,” he added.

The region has an advanced literacy rate and the lowest crime rate in the country.

Alif, who currently pursues his PhD at Pondicherry University, feels a harmful “political-corporate nexus” is at play in Lakshadweep. Besides, he said, “There’s a planned effort to divert public attention from various failures of the Narendra Modi government.” 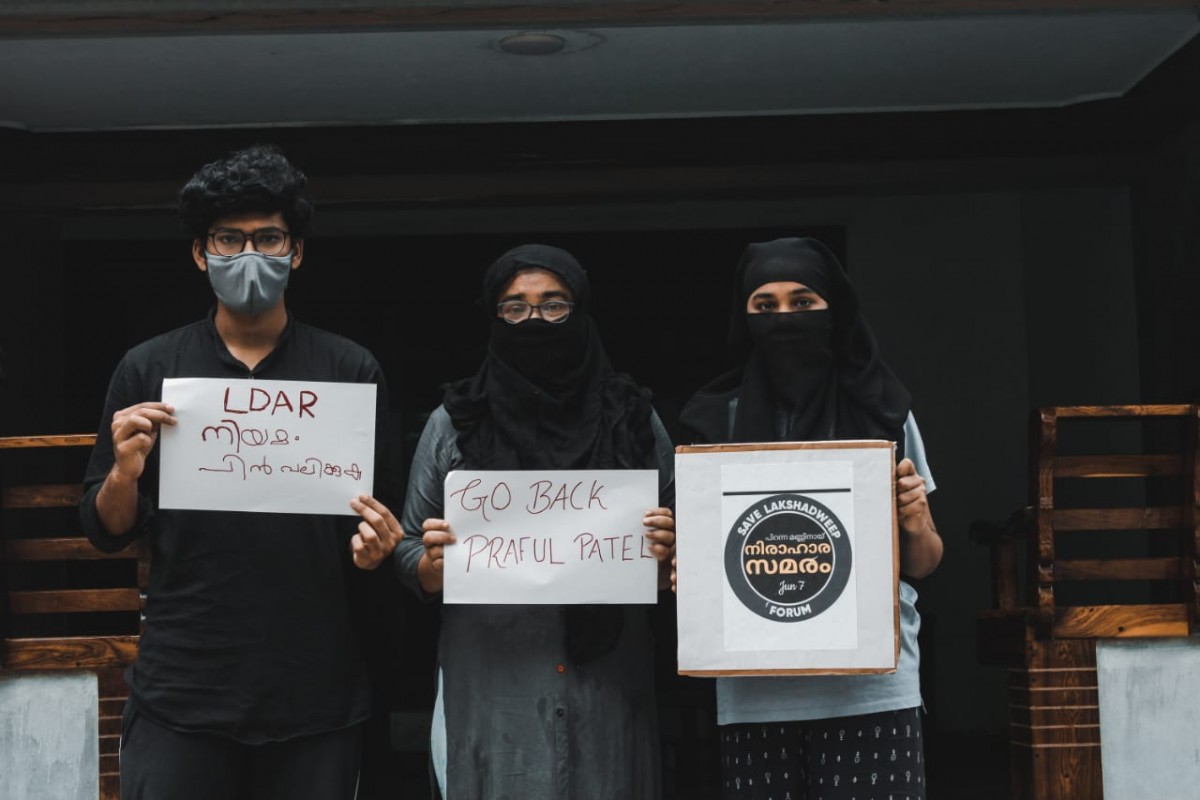 Youths hold placards during the protest at Minicoy Island, Lakshadweep, on June 07, 2021. Photo: By arrangement.

He also said that Lakshadweep has a unique cultural and religious identity that does not fit well with the idea of “monolithic Indian culture” advocated by the Rashtriya Swayamsevak Sangh and BJP.

Alif said people of Lakshadweep are “helpless”, because “They [RSS-BJP] are determined to implement their agenda”.

“People here are falling to extreme poverty. Nearly 1,500 casual labourers have been terminated. Many others’ jobs are also in danger…We seem to be moving back to the dark ages,” he said.

People’s response on Monday, feels Asif, was reassuring to many that the island will resist.

Protests against Praful Patel and his administration is growing in the mainland too. In a detailed letter sent to Narendra Modi, a group of 97 retired civil servants called the administration’s moves as “entirely misconceived”, which open the islands “to predatory development” and threaten “to disrupt and displace a peaceful island community and change their lives for the worse”. 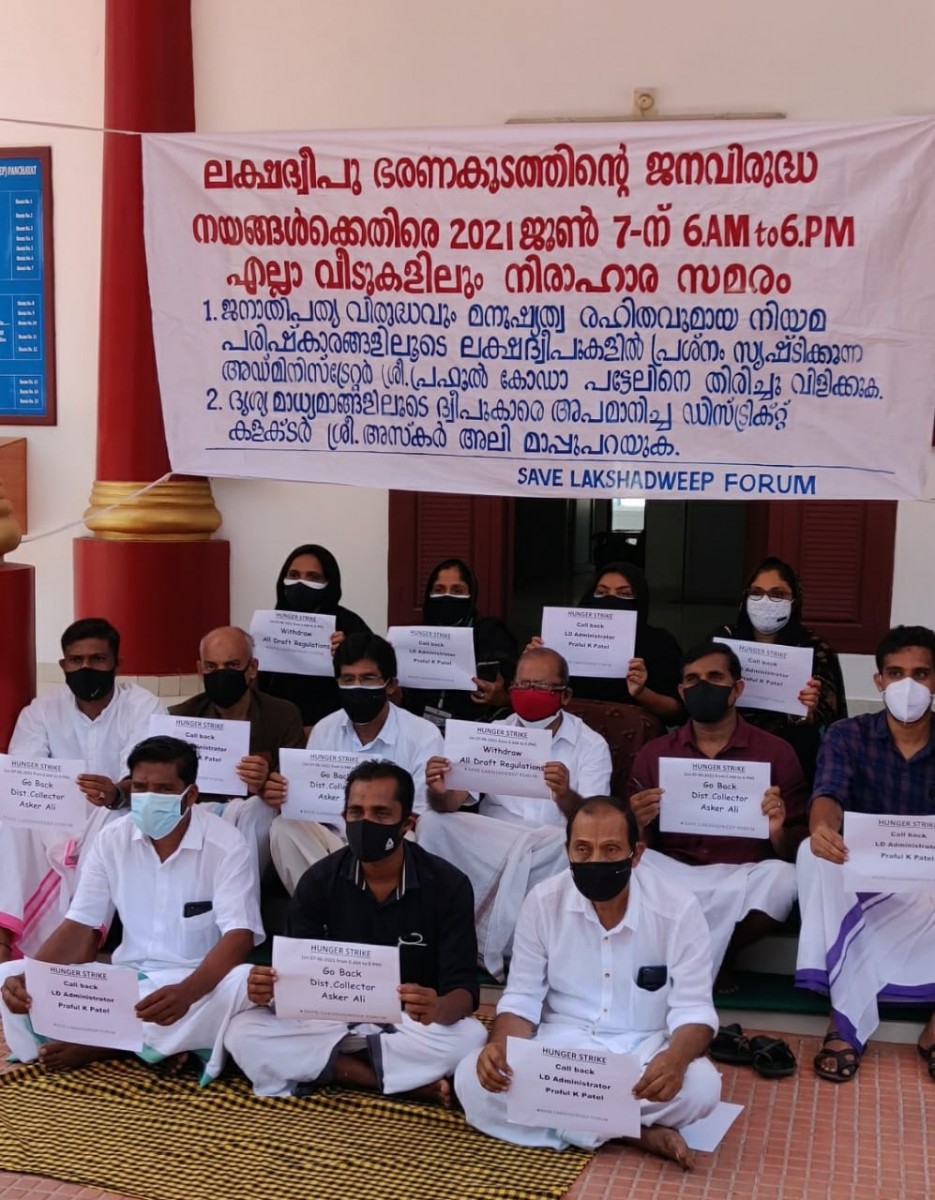 Political leaders like Rahul Gandhi, Kerala chief minister Pinarayi Vijayan, Tamil Nadu chief minister M.K. Stalin and many others have raised their voice in support of Lakshadweep’s people. The Kerala assembly has also unanimously passed a resolution calling for the removal of Patel from his post.

Amit Shah, whose home ministry has a crucial role in the governance of Union Territories, recently said local population will be taken into confidence before making any significant change in the islands.

Shah had made a similar promise earlier too, when Lakshadweep MP Mohammed Faizal met him in February. However, Patel has continued with his unpopular moves, and proposed or implemented fresh controversial draft regulations and executive orders since the meeting between Shah and Faizal.

Patel has also made it clear that he has no plan to reconsider his contentious moves.