The workers are mostly from West Bengal and Bihar. 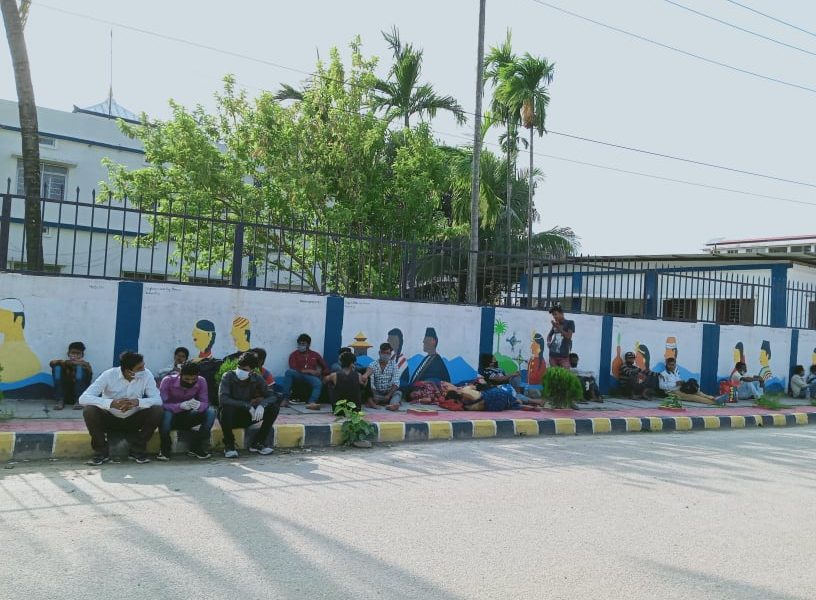 Indian migrant workers sleeping on the footpath near the border. Photo: Special arrangement

Kathmandu: Jaya Yadav (37), an Indian migrant worker, has been in Kakadvitta with his wife and daughter for the last five days.

Kakadvitta is Nepal’s eastern border with India’s West Bengal. More than 400 Indian migrant workers have been waiting here, wanting a chance to enter India and go back home.

The West Bengal government has denied them entry, and they have been sleeping at the Kakadvitta bus park or even on the open streets.

Most of these Indian workers are from Bihar and West Bengal, and work at brick kilns in Nepal’s Jhapa district.

“We don’t know why the Indian government denied us entry. Nepali workers are coming from India day after day,” Jaya told The Wire over the telephone. The workers usually live in and around the factories they work at, which are currently closed.

According to media reports from India, the West Bengal government was requested by Central government to open the border for workers entering from Nepal a month ago. However, it refused. Even trucks carrying foodgrain, oil and petrol are restricted from crossing the border.

According to a local journalist, Chiran Ghimire, 17 young Indian people crossed the border without the administration’s knowledge last week. Indian officials, however, later brought them back to Nepal again.

Rajendra Pokharel, DSP of Jhapa district and chief police officer of the Kakadvitta border, said that they can’t send the workers home until the Indian government agrees.

“We can’t send them home from the border. The Indian police requested us not to, because of the lack of quarantine facilities,” said Pokharel.

Sunita Thakur (23) from West Bengal, working at a brick kiln in Jhapa, spent the last night on a footpath with her five-year-old son.

“A Nepali local leader provided us with a meal last night, but there weren’t beds available anywhere. I had no option but to spend the night at this bus park with friends. Everyone is hesitating to let us into their homes or hotels,” says Sunita. “We had hoped that we would be able to go back home, but now it seems like the lockdown is uncertain.”

Bimal Acharya, mayor of Mechi Nagar municipality, said that they could provide only meals a day and drinking water for the migrants. Arranging for beds right now is “impossible”, he added.

“Yes, we know they are in trouble, they should be sent back to home. But in this situation we can’t provide bed,” says Acharya.

Sunita walked for two days to get to the Kakadvitta border. Now she has no idea what to do next, with Indian officials stopping them at the border.

Close to half the people sleeping in the open are women and children. 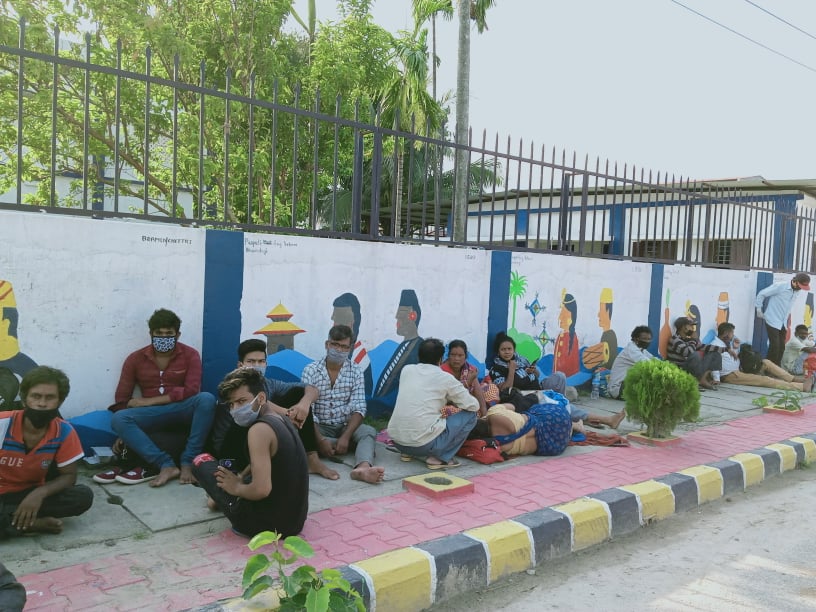 Indian migrant workers sleeping on the footpath near the border. Photo: Special arrangement

Rubi Shah (26) from West Bengal is also a brick kiln worker. She says she was excited to cross the border after the Indian government began running trains for workers. That’s why she walked for an entire day to reach the Indian border. On Sunday evening, though, her hope turned into a deep dilemma.

“These days Indian people are travelling on trains. Thousands of Nepali workers have come back easily. I think we can return to our village now. But the police stopped us today. Should we go back to our brick kiln or stay until the border opens?” says Rubi on the telephone.

Her factory owner stopped paying salaries after the lockdown was extended in Nepal. “Till when can we stay here with meals and water? Who can we talk to about this?” asks Rubi.

Rubi doesn’t know when the Indian border will open for them. A month ago, the Indian embassy had initiated the process of bringing back workers from various brick kilns in Province 1 (the eastern province of Nepal).

According to Mahendra Shah, chairman of the Brick Kiln Association, thousands of Indian migrant workers returned to India through the eastern border pass. But since the West Bengal government restricted its border, thousands of Indian workers have been stranded in border areas.

According to Gunaraj Thapa, a chairman of Brick Kiln Association’s Jhapa district chapter, more than 3,000 Indian labourers work in the district’s brick kilns. Across Province 1, there are more than 10,000 Indian workers.

Since the production of bricks is seasonal, Indian workers usually come to Nepal in October and return by the first week of April. This year, they have been stranded due to the COVID-19-induced lockdown in Nepal and India.

Raman Paudel is a journalist based in Kathmandu. He tweets at @poudelraman2.