Eighty-year-old Singh said that on January 26, he along with many others were at the Burari ground, carried out a ‘Khalsa parade’ there itself and did not go to the Red Fort.

Khamanon (Punjab): On Sunday morning, 80-year-old Gurmukh Singh reached his village in Punjab after spending at least 15 days in the Tihar Jail in New Delhi along with a dozen or so farmers.

While a majority of the farmers and farm law protesters arrested in relation to the mayhem that occurred at the Red Fort, ITO and some others parts of Delhi were picked up on January 26, Gurmukh Singh was one of those rounded up by the Delhi Police on January 28 from the Burari ground – a site which was offered as a designated protest area to the farmers in November last year.

According to FIR No. 31 dated January 28, registered by the assistant sub-inspector (ASI) of police Harbans Lal at the Mukherjee Nagar police station, “Nine farmers approached the main entry gate of the Burari ground at around 7:30 pm raising slogans and urging ASI Harbans to let them go to Red Fort for a sit-in protest.”

“I (ASI Harbans) told the farmers that the Red Fort has been shut down till January 31 and no one is allowed to go there,” the FIR noted.  According to the FIR, ASI Harbans was beaten and his police uniform torn to pieces by the farmers. Following this, the farmers were controlled by other policemen in the area, the FIR noted.

Also read: Tractor Rally: From an Ex-Soldier to Bus Conductor, Here Are Some People Put Behind Bars

The FIR also said that the nine farmers, under the leadership of Jaskaran Singh Kahan Singh Wale – a farmer leader from Punjab, were also a part of the crowd which stormed the Red Fort on January 26.

On the basis of this complaint, charges of assault on a public servant, disobedience of a public servant, intentions of spreading an infectious disease and criminal offences under various sections of the Indian Penal Code were registered against the octogenarian.

However, speaking to The Wire from his village Samaspur Singha, Gurmukh Singh said that the police have ‘framed’ all of them under “false charges.”

“Eh lok jhooth bol rahey hain (They are lying),” he said in his old but powerful voice. 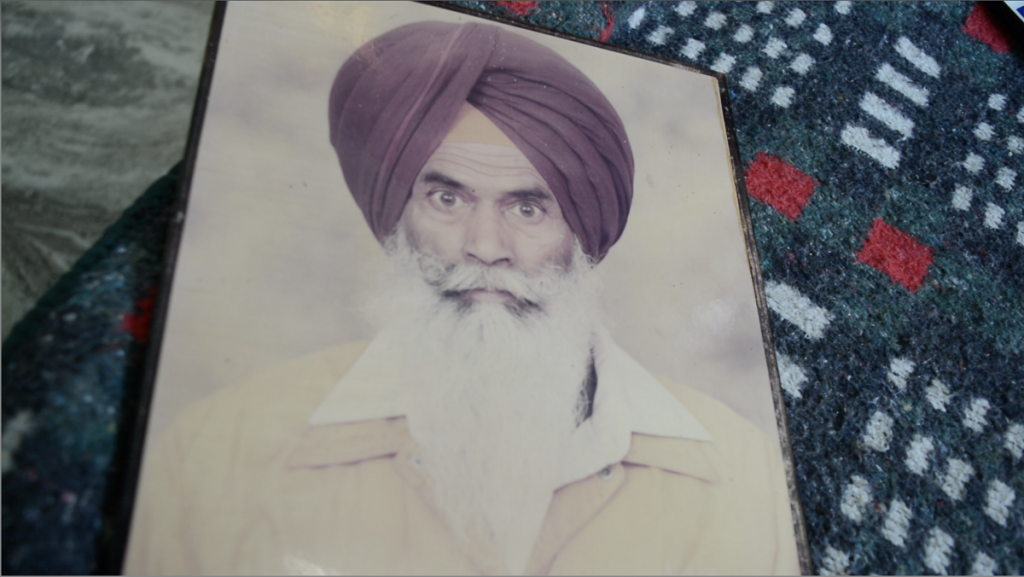 A photo of Gurmukh Singh at his residence. Photo: Pawanjot Kaur/The Wire

According to his version of events, the Delhi Police wanted to clear the Burari ground and they did so forcefully. “At around 7:30 pm they started breaking our tents. Later, they shoved us all into a bus. I kept telling them to at least let me collect my bag of warm clothes but they did not let me. They also did not let me collect my dental implant worth Rs 10,000,” the 80-year-old said. “I kept telling them that two of us had served in the army and are disciplined people but they weren’t ready to listen to anything,” he added.

Singh said that on January 26, he along with many others from his outfit were at the Burari ground and did not go to the Red Fort. “We were in Burari. We carried out a ‘Khalsa parade’,” he said.

In a video doing the rounds on social media and on WhatsApp, the 80-year-old is seen holding the Nishan Sahib and marching ahead of a row of farmers holding a Nishan Sahib each and sloganeering. They’re shouting – ‘Raj karega Khalsa‘ or the pure will rule (a phrase from a Sikh prayer).

According to Jaskaran Singh Kahan Singhwale, chief of the Shiromani Akali Dal (Amritsar) [SAD (A)] farmers’ wing, he along with others left for the tractor rally from Shambhu border on January 26 and reached the Red Fort along with hundreds of other protesters. He confirmed that Gurmukh Singh – a member of the SAD (A) – was not there with them.

Gurmukh Singh alleged that the Delhi Police beat him. “While they were shoving us in the bus, they hit me on my head,” Singh said.

Narrating his experience inside jail, Singh said that the Delhi Police used foul language against all protesters. “Young men are being beaten up brutally inside the jail. Whoever is begging for mercy is being beaten up even more. All of us were also verbally abused,” Singh said.

On Sunday, Singh was reunited with his four-year-old grandson and his family. He said he is very happy to be back home and will continue struggling against the farm laws. 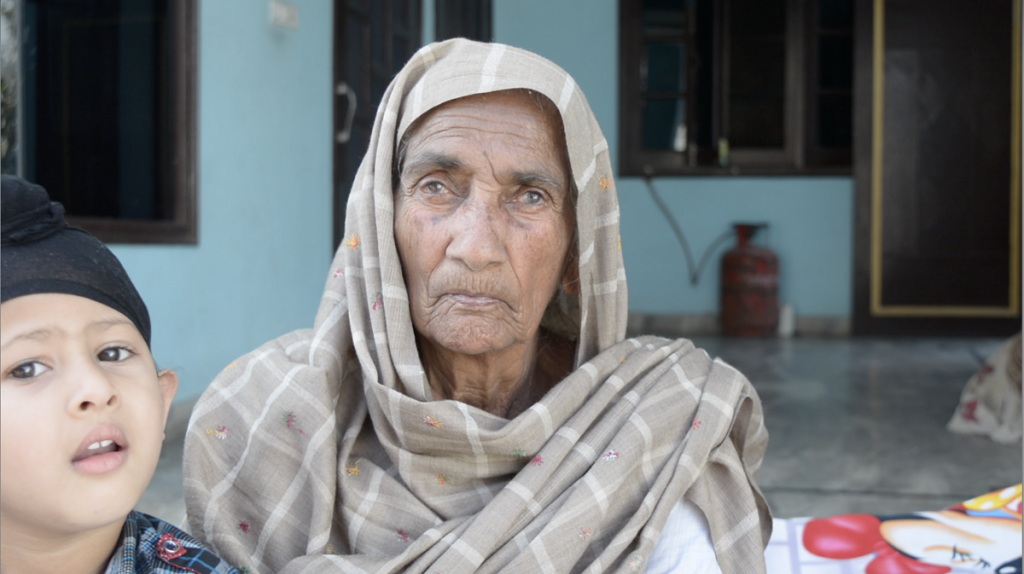 ‘An inspiration back at home’

Singh is a small farmer with a landholding of roughly two acres at Samaspur Singha village in Fatehgarh Sahib district. He lives with his wife, sister, daughter-in-law and grandson. His son is a blue-collar employee in Italy and visits only occasionally.

Village locals call Gurmukh Singh a “good man”. One young man said that his life full of struggles has inspired hundreds of people in the village.

Singh served as subedar or a junior commissioned officer (JCO) in the Indian Army in the 1980s. He quit the barracks in revolt when the army launched Operation Bluestar inside Amritsar’s Golden Temple against terror accused Jarnail Singh Bhindranwale. After Singh’s revolt, Simranjit Singh Mann, the president of the SAD (A) faction helped him and many other ‘dharmi faujis’ win back their right to a pension. Since then, Gurmukh Singh has been close to Mann.

“He is one of those who fight for the panth. His life has been full of struggle,” said Sukhdev Singh, the chief of SAD (A) in Khamanon area.

The SAD (A) was formed in 1994 under Mann’s leadership. It is a radical faction which splintered away from the main SAD in the same year and is a registered political party at the state level. Mann is seen as an advocate for Khalistan, or a sovereign Sikh homeland, and was jailed for five years but never convicted of any offence. Mann’s party, in an earlier avatar, did well in 1989, when it won six parliamentary seats from Punjab. In 1999, it managed to win one seat but since then has not fared well electorally.

The SAD (A) believes that both Deep Sidhu and Lakha Sidhana, accused of conspiring to hoist the Nishan Sahib at the Red Fort on January 26, are “heroes” of the Sikh religion. A party worker who met The Wire at Samaspur Singha said that the farmers’ leadership only tried to throw both the men under the bus. The party also rejected the call for boycott of the two men. 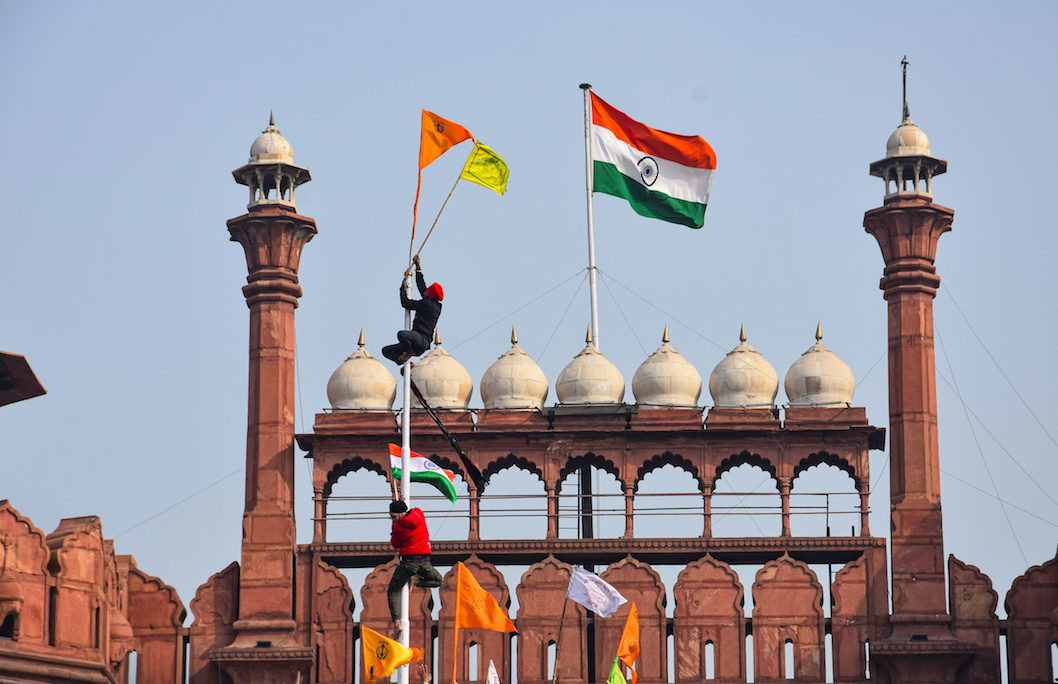 On February 7, locals of the village got together near the village gurudwara to demand the release of Gurmukh Singh.

Also read: As a Desperate Government Hides Behind ‘Toolkit’ Hysteria, the Farmers’ Movement Is Intensifying

“He was a big inspiration to all of us. Many people love him. He is our Babaji”, said Sandeep Singh, a young man from village Samaspur Singha.

Singh’s older sister, Sampooran Kaur told The Wire that he has been associated with the farmers’ movement from July last year. “He kept going to the protests everywhere. He has always been one of those who leads people. He likes mobilising people. After his arrest, we kept calling on his phone but couldn’t get through,” she said.

Gurmukh Singh’s daughter-in-law sitting next to Sampooran Kaur on a cot said, “We actually found out about his arrest from Mann sahib’s people. He was always with them and was close to them.”

Sandeep Singh also said that because the so-called mainstream media or godi (lapdog) media isn’t paying any attention to the mass arrests that the Delhi Police has done, youngsters of the village are trying to rope in famous Punjabi singers to raise awareness about these arrests.

“Sometimes, looking at these singers, the media also follows them and covers the real issue,” he said.