Now That the 'Toolkit' Is Out of the Bag, Here's the Role it Plays in Peaceful Protests

Planning how to use ‘tools’ at a people’s disposal ensures that a peaceful movement is not ignored and achieves its target sooner than later. And the tradition goes back to Gandhi and Martin Luther King Jr. The toolkit under fire is a virtual document and not a box of physical tools, unlike the metal batons police in Shahdara sought to acquire whilst dealing with farmers. Photo: Twitter/@saurabh3vedi

New Delhi: Late on Saturday, the news agency ANI tweeted a video clip of minister for external affairs S. Jaishankar saying a few lines beginning with, “It has revealed a lot.”

Although no mention was made by Jaishankar himself, ANI said in the tweet’s caption that the minister was speaking on the “toolkit matter.”

#WATCH: EAM Dr S Jaishankar speaks on ‘Toolkit’ matter, says, “It has revealed a lot. We’ve to wait & see what else comes out. There was a reason why Foreign Ministry reacted to statements which some celebrities gave out on matters on which they obviously didn’t know very much.” pic.twitter.com/wWmqWtFkL8

The ‘toolkit matter’ has taken fervent supporters of the Centre by storm.

The word was thrust into prominence when teenage climate activist Greta Thunberg tweeted a ‘toolkit’ for those who wished to help add voice to the farmers’ protests.

Members of parliament, propaganda organisations, Twitter-happy actors, supporters of the Bharatiya Janata Party and the everyday rightwing social media activist immediately pronounced their own victory and the defeat of the farmers’ cause. The ‘toolkit’ was definitive proof that the farmers’ movement was an orchestrated one, its every move was not just calculated but subversive and seditionist  as well and had been put down on a document which Thunberg had now made available for scrutiny, they said.

Thunberg’s initial tweet had six-figure impressions when she deleted it. She has since replaced it with a more updated toolkit.

The deletion added fuel to the rightwing’s conspiracy fire.

The Cyber Cell unit of the Delhi Police also lodged an FIR against what it claims are “pro-Khalistan” creators of the “toolkit” for waging a “social, cultural and economic war against the Government of India”.

Though the original toolkit is widely available online with news sites that downloaded and saved it, no one has been able to identify anything that even remotely suggests a conspiracy to commit violence.

An explainer in the Indian Express describes the original toolkit contained links to the background of the protest, hashtags for mobilisation on social media and pointers on how to make one’s voice heard.

“In the Prior Action section, the toolkit mentions sharing “solidarity photos and video messages with the above mentioned email id, “preferable by January 25; a “tweet storm” on January 23, and protesting “near Indian Embassies, Government offices, Media houses (or even Adani-Ambani offices) globally” on January 26.”

“It is this section”, the newspaper says, “that the police say seems to indicate that the violence on January 26 was premeditated and part of a conspiracy.”

The call to tweet with planned hashtags, photograph protests and organise in designated places are also parts of the updated toolkit, but without dates mentioned – understandably, since January 26 (which farmers’ unions had long since been saying would be a day of massive peaceful protests) has passed.

For government and law enforcement prone to seeing ghosts, the toolkit is a grand cog in the anti-national wheel. Governments abhor opposition but especially organised opposition. When protests do occur,  it benefits governments to keep them spontaneous, with little advanced and strategic planning to guide them. And to paint the first sign of coordination as a ‘conspiracy’.

In an article titled ‘The Dissident’s Toolkit’, Harvard professor Erica Chenoweth pins down the effectiveness of nonviolent action to such planning.

The above is exactly what the toolkit tweeted by Thunberg has sought to achieve.

Chenoweth goes as far as to declare, “The campaigns that ultimately succeed will be the ones that fully embrace Sun Tzu’s warning that “tactics without strategy is the noise before defeat”.”

While a toolkit does not automatically guarantee uniformity among a protesting mass – the fractious protests on January 26 is testament to this – it helps remote sympathisers access and participate in the movement, promoting strength in numbers. In a long-term movement, it can be assumed to be a successor of the pamphlet that delineates the ethos of the protest. But it is neither indispensable, nor binding and certainly not a factor that essays culpability of a party.

Nearly every nonviolent movement that has been successful in the history of movements has operated out of a version of toolkit. A database of global nonviolent movements maintained by Swarthmore College notes nearly 300 protests that have depended on leaflets, books and webpages – from British citizens’ campaign for the abolition of the slave trade in the 18th century to the overthrow of the Milosevic government in Serbia.

However, it is easy to see why the people who are being protested against would decry such planning as conspiratorial – because planning how to use ‘tools’ at a people’s disposal ensures that a movement is not ignored, does not splinter and achieves its target sooner than later. 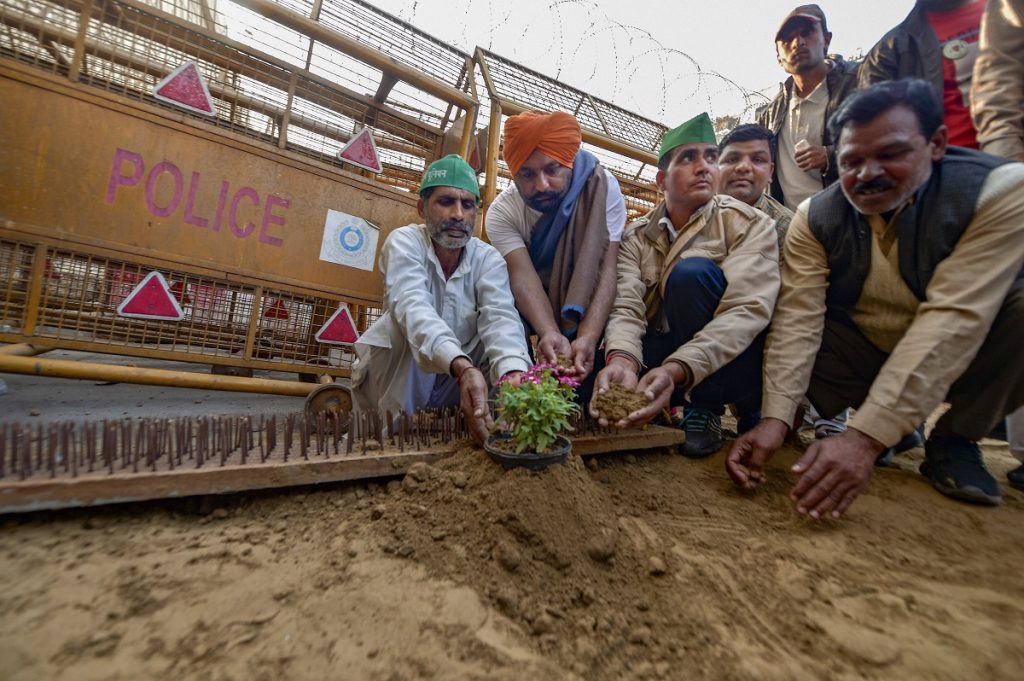 Farmers plant flower plants near the spikes fixed by the police at the Ghazipur border, February 5, 2021. Photo: PTI/Vijay Verma

The late scholar Dr Gene Sharp, who is often hailed as the ‘Machiavelli of nonviolent action’ thought as much when he pointed out nearly 200 methods in which protesting masses can take up peaceful protests and lead a fruitful resistance. Sharp’s tools for protest range from workplace walkouts to plain silence to rude gestures to Lysistratic non-action to Satyagrahic action.

And the source of Sharp’s deep meditations is a figure familiar to the Indian protest scene – Mahatma Gandhi.

It would not be an overstatement to say that Gandhi, along with the likes of Henry David Thoreau and Martin Luther King, is among the key authors of what has become the essential toolkit for peaceful protest worldwide. In multiple speeches and texts Gandhi has fleshed out exactly what Satyagraha entails and how those who have nothing can use it to tilt oppressive power structures.

Sharp’s focus on Gandhi draws attention to how deeply ingrained his legacy is in all forms of protest naturalised today. Gandhi’s life, politics, and calls for strikes function, as it were, as a toolkit for peaceful protesters worldwide.

Also read: Gandhi’s Last Fast in the City of the Dead

That Gandhi’s views on nonviolent action also pointed to a necessity for streamlined dissent that needs to be pre-planned to bear results, is evident from Sharp’s preface to the book, How Nonviolent Struggle Works:

“The nonviolent army, said Gandhi, should be so well- prepared as to make nonviolent war unnecessary. One ought to demand of the opponents not only promises but some advance deeds as proof that their promises will be kept later.

“One ought not to agree to the opponents’ demands for a major restriction of the resisters’ activities before negotiations.”

The quoted portion bears prophetic resemblance to the strategy brought to the farmers’ situation through rounds of negotiations that the government has claimed is its way of extending help to them.

In multiple books, Sharp seeks to impress upon people one essential Gandhian fact – that nonviolent action is not inaction. And to prevent it from becoming inaction, it needs a set of ‘nonviolent weapons’. Which is as much or as little that a toolkit seeks to offer.

Meanwhile, the purported authors of the toolkit Thunberg shared – the Poetic Justice Foundation which is accused of having Khalistani links and orchestrating the violence on Republic day – have said they did not organise any action either on Twitter or on the ground.

It is noteworthy that even if international celebrities’ support to the farmers’ cause arose out of a ‘toolkit’ – as is the main grouse of a section – it will only be the latest instance in a long tradition of protests attempting to have the loudest voices speak on their behalf.

And the need for support from loud voices isn’t limited to the protesters. Ironically, while international celebrities are being accused of using a conspiratorial protest toolkit, similarly worded tweets by Indian celebrities in support of the laws are not seen as similarly designed though they clearly have emerged from sort of rival ‘toolkit’.