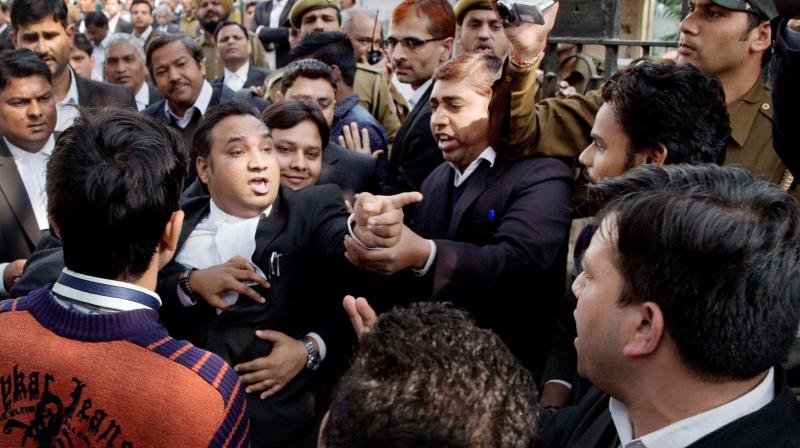 “Everyone has the right to freedom of opinion and expression; this right includes freedom to hold opinions without interference and to seek, receive and impart information and ideas through any media and regardless of frontiers.”

Article 19 of the Universal Declaration of Human Rights

In the time since the attacks on students of the Ambedkar Students Association in the University of Hyderabad resulting in the loss of Rohith Vemula and earlier in the year in other institutions like IIT Chennai with the Ambedkar Periyar Study Circle, and now in JNU, we have been forced to think afresh on the question of associational freedoms within educational institutions, especially where it has involved the right of students to free speech and expression, and also to organise.

What we need to bring forward in the debate is the democratic exercise of associational freedoms by the membership of professional associations in order to defeat their appropriation by apologists for the mobs that we encounter round every corner today. This is especially critical in an environment of anti-intellectualism and majoritarian attacks on individual and collective attempts at informed debate and social critique both within and outside institutions of higher education.

The anticipation of violence and the fear of possible attacks have served to police the most aware and articulate into compliance with institutions withdrawing invitations to speakers who might be controversial — what is not controversial today, one might well ask — and withdrawing permissions for speaking and performance events. There are a host of others that retreat into silence, hoping and waiting for the moment to pass.

In the weeks since Kanhaiya was arrested, we have heard accounts of two membership based associations. The first was on February 19, when Kanhaiya Kumar was to be produced in court. “Delhi Police had held a series of meetings with local members of the Bar Association [of the Patiala House Court] to ensure “orderliness” in court that day”, reported the Indian Express. We have several eyewitness accounts and self-congratulatory admissions by a large section of lawyers of physical and verbal violence as well as menacing behaviour of lawyers that day against what they called “anti national” elements. The police deployed there appeared to be under instructions to exercise restraint in quelling mob violence. No arrests were made although a person in custody was assaulted in the premises of a court. There was also a widely covered march of lawyers in professional garb from this court against “anti-national elements.” The New Delhi Bar Association that functions from the Patiala House Court has not denied that these lawyers were its members.

Meanwhile, the national president and honorary secretary general of the Indian Medical Association, on February 24, sent a letter to the Home Minister Rajnath Singh, which began with the following words: “We the Indian Medical Association, of over 2.6 lac members condemn anti national incident taken place recently at JNU.” It goes on to appeal to the government to take strict and necessary action against any persons or organisations or group carrying out “any anti national protests, speeches, debates or writings in the country.” While appealing to the government to conduct fair and free investigations, it also asserts “culprits should be punished as early as possible…so that in future no one can dare to do anti-national activites in the country.” What is of utmost significance in this letter is the assurance that “The 2.6 lac members of IMA together wholeheartedly extend our support to the government in this matter.”

We also have the case of the Indian Science Congress Association, which earned fame when the 102nd Congress in January 2015 in Mumbai witnessed in silent acquiescence speeches on ancient Indian aviation technology. This however falls in a different category because it is an association set up under the aegis of the Government of India; in that sense not an independent professional association like the others mentioned here. However, the question of why professional scientists fell in line so easily is one that we have no answers to. Or perhaps we do.

Consider the history of the Association of Scientific Workers of India, a trade union established in 1946 with Jawaharlal Nehru as its President. Dr. P M Bhargava, one of the founders of the Association, points to its present sorry state: “[o]ne of the objectives of ASWI was to propagate scientific temper. It was very active in the beginning, but fizzled out by the 1960s as the bulk of scientists in the country, including many who were occupying high positions, were themselves not committed to scientific temper which calls for rationality, reason and lack of belief in any dogma, superstition or manifest falsehood”.

On 24 February, Professor Rajesh Misra, Professor of Sociology at University of Lucknow was attacked on the campus and his effigy was burnt outside the department by students belonging to the ABVP. The reason: Professor Misra’s support of an article that spoke with pride about Umar Khalid, one of the JNU students under arrest. As a life member of the International Sociological Society, I would like to see an unequivocal statement in support of Professor Rajesh Misra who is also a life member of the Society.

We have had intellectuals, scientists, sociologists, social scientists, doctors, writers, creative and performing artists and others band together in protest in the past months. There have been statements circulating online for signatures and several submitted to the President, vice chancellors and other figures of authority in the hope that the tide will turn in favour of dissent, diversity and dignity through this coming together. It must.

This still leaves unaddressed the other side of the exercise of associational freedoms.

Let us take a brief look at the Mission Statements of some of these bodies that we constitute as members even if we are paying but passive members:

According to the website of the All India Bar Association, this body “aims at upholding the Constitution of India and the representative, free and democratic form of the Government.” Important among its objectives are the following:

Even more significantly, it is committed to building the strengths of the “legal fraternity” and “lawyer community.”

The Indian Medical Association, its website declares, “is the only representative voluntary organization of Doctors of Modern Scientific System of Medicine.” It has three objectives:

The delineation of the roles and responsibilities of office-bearers of the IMA does not authorise elected representatives to issue statements in the name of IMA in matters not directly connected with medical practice and public health. Clearly therefore, the president and honorary secretary general acted in excess of their powers and in the name of the entire membership when there was no discussion or national vote on whether the IMA should intervene in the events unfolding at JNU.

The Indian Sociological Society is a membership-based national association of professional sociologists – teachers, students and researchers – and its primary activity is to provide a forum for sociological discussion and debate through organising meetings and conferences across the country. Sociology as a discipline is meant to foster critical traditions and defend diverse opinions in the classroom and outside. A life member of the Society, Dr. Rajesh Misra is attacked for his views and is asked by the university to explain his “incitement of violence”.

Is it enough for us to sit back and say, “but we were not consulted”? Is it enough for us to come together as independent doctors, lawyers, scientists, sociologists or other professionals and make condemnatory statements? Or is it time to go beyond that and act in the name of the associations of which we are part, insisting that there is a contrary view that must be represented and debated by members who wish to do so. It is possible that this move would also strengthen the possibly paper-thin minority within any of these elected bodies so that they do not feel compelled to swim with the tide.

The question before us is simple, really. This is not a case for being allowed to exercise the right to freedom of association as in the case of students who are barred from forming unions or organising events especially when such events or groups espouse views contrary to parties and governments in power. This is a question of our inability as professional sociologists, lawyers, doctors, scientists to call the office bearers of our associations to account and our collective failure to resist the appropriation of associational spaces in the name of patriotism and a narrow, sectarian nationalism that promotes hate and intolerance. It is also our (perhaps unintended) acquiescence to the conspiracy of silence and compliance that is creeping across our professional and institutional worlds leaving us no space except the street (which is also manifestly unsafe) to speak out our politics.

We can scarcely forget that these professional associations and the periodic professional events they organise serve an important pedagogic purpose and are the learning ground for students in higher education and present forums for debate on questions ranging from the meanings of nationalism and the constitution to the scientific temper, the purpose of scientific endeavour, questions of human dignity and beyond. We have before us the stunning example of the JNU Teachers’ Association in close solidarity with different students’ organisations in JNU, enabling an unprecedented cascading of resistance across the country. Perhaps it is time to wrest control over these associational spaces and redefine their purpose in full and responsible exercise of our associational freedoms to promote non-cooperation and ethical dissent.