Rahul, Priyanka and Other Congress Leaders Detained During Nationwide Protest 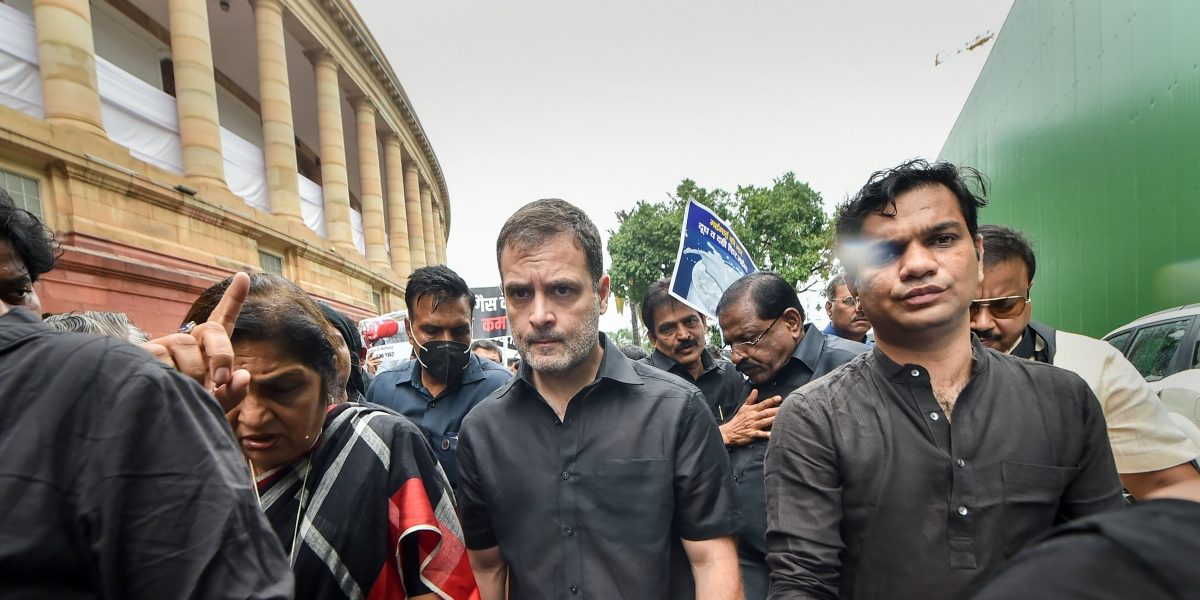 New Delhi: Rahul Gandhi was detained soon after he kickstarted the Congress’s day-long protests against price rise, unemployment and GST rate hikes on Friday morning and equated the Narendra Modi government with a “dictatorship” that has “hijacked” all institutions of India’s democratic structure.

According to reports, several Congress MPs – including Gandhi and Shashi Tharoor – were detained as they were headed towards the Rashtrapati Bhavan to protest issues such as price rise, unemployment and GST rate hikes on essential items. The MPs were dressed in black as a symbol of their protest.

Delhi | Several Congress MPs including Rahul Gandhi and Shashi Tharoor detained by police during a protest against the Central government on price rise and unemployment pic.twitter.com/9b97uQEl35

#WATCH | Our job is to raise the issues of the people…Some Congress MPs detained, also beaten by police: Congress MP Rahul Gandhi during protest against price rise and unemployment at Vijay Chowk, Delhi pic.twitter.com/h0bgJDkFCq

Priyanka Gandhi Vadra was also detained while she demonstrated near the AICC headquarters.

Talking to reporters at Vijay Chowk, Rahul Gandhi said, “We are here to raise the issue of price rise.” He also said “democracy is being murdered”.

Asked if the MPs were manhandled, he answered in the affirmative.

He alleged that some of the party MPs were even “beaten up” by police.

Earlier, addressing a press conference, Gandhi said that the Congress was forced to adopt the agitational route as the government, despite consistent demands by opposition parties, has refused to discuss price rise, unemployment, GST or China’s alleged ingression into Indian territory in the Parliament.

He added that the opposition voices are being systematically targeted by the “BJP-RSS” system of governance that has placed its ideological supporters in democratic institutions like the judiciary, Election Commission, Central investigation agencies and the media. As a result, opposition campaigns and voices on such pertinent issues of people have been rendered ineffective, he said.

“We’re witnessing the death of democracy. What India has built brick by brick, starting almost a century ago, is being destroyed in front of your eyes. Anybody who stands against this idea of onset of dictatorship is viciously attacked, jailed, arrested and beaten up,” Gandhi said.

He said that any criticism of the government is viciously attacked and critics are being imprisoned while issues of common people are not being allowed to be raised. “Today there is no democracy in India, there is [a] dictatorship [led by] four people,” he said.

The Congress leader’s attack on the BJP-led Union government came days after several Congress MPs were suspended from parliament for disrupting the house proceedings after the government did not pay any heed to their demands to discuss the GST rate hike, price rise and unemployment. The Congress has been in protest mode ever since Sonia Gandhi and Rahul Gandhi were summoned by the Enforcement Directorate (ED) in the National Herald money laundering case.

Earlier this week, the ED conducted raids in 12 locations purportedly connected to the National Herald probe, including the Delhi offices of the newspaper. The Congress leaders have maintained that the ED has not found a shred of evidence against the Gandhis and that the probe is yet another way to restrain the Gandhis who have been “fearlessly raising their voice” against the Modi government’s alleged authoritarian practices.

The grand old party has planned a series of protests on Friday across the country. Many of its top leaders will also attempt to march from the All India Congress Committee (AICC) headquarters on Akbar Road, New Delhi to the Prime Minister’s House on Lok Kalyan Marg, while its Parliamentary Party leaders will also take out a rally to the Rashtrapati Bhawan. The Delhi police, however, has denied permission to the Congress to hold any rally and has imposed prohibitory orders ahead of the march. However, Gandhi asserted that the party leaders are going to defy the orders.

“I will be the happiest person if they arrest me,” Gandhi had said in his press briefing.

Immediately after Gandhi’s remarks, the BJP hit back at the Congress and said that Congress – which has not chosen a non-Gandhi chief for months now – should not be talking about democracy. It retorted that the Congress protests were “not to save democracy” but to protect the “properties worth Rs 2000 crore” allegedly owned by the Gandhis.

On Friday too, parliament proceedings were cut short as the government once again refused to discuss the issues raised by the opposition. As the Congress MPs planned to march to Rashtrapati Bhavan, they were detained at Vijay Chowk.

Rajya Sabha got adjourned immediately after 11am today with protest by Congress MPs against price rise, unemployment and GST. Very soon all Congress MPs will begin their march to Rashtrapati Bhavan.

“Today once again Congress MPs were denied the democratic right to protest against inflation, unemployment and GST. We were packed into a police van at Vijay Chowk. One thing is clear, only those who are afraid try to scare!” said Congress secretary Jairam Ramesh in a tweet in Hindi.

Democracy is a memory. pic.twitter.com/CnobQwSm44

Priyanka Gandhi Vadra jumped over police barricades put up on the road outside the party headquarters and squatted on the road, with police personnel asking her to move from there as section 144 of the Code of Criminal Procedure (CrPC) is in force in the entire area of New Delhi district – except near Jantar Mantar.

The Congress general secretary was subsequently put in a vehicle forcibly by police and taken away. 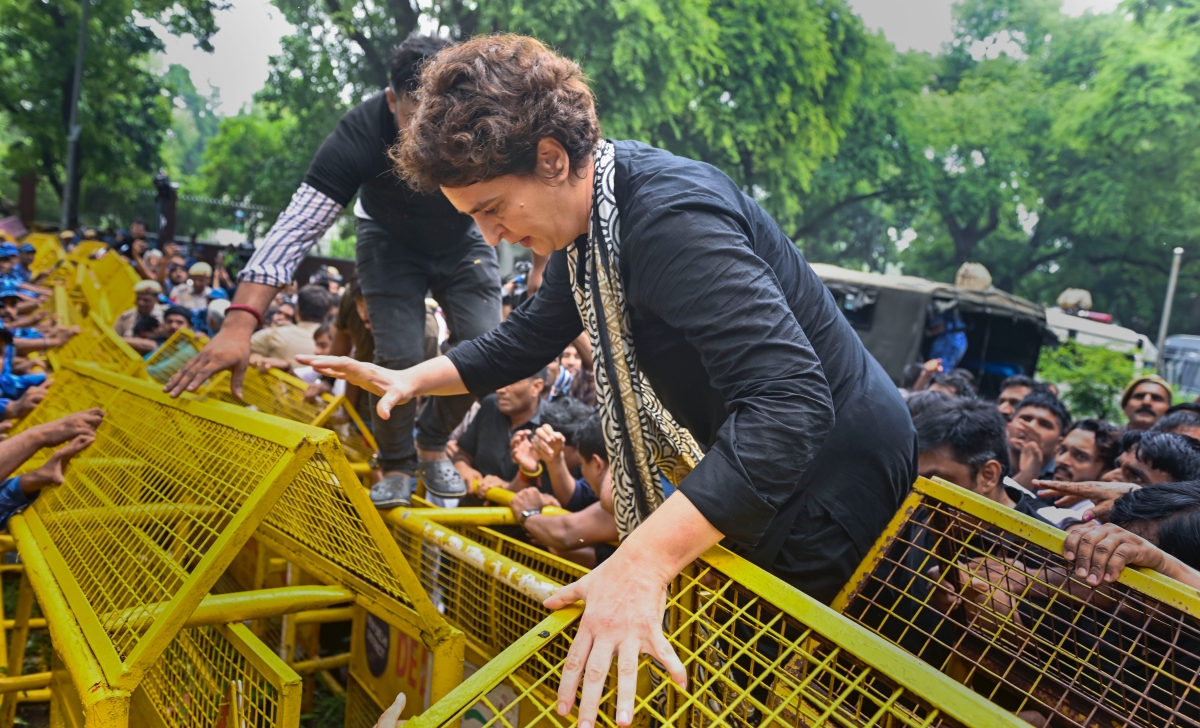 In a video from inside the police vehicle shared by the Congress party, Gandhi Vadra said the government is wrong if it thinks that by showing force, it can silence the Congress party and make it come to a compromise.

“Their ministers cannot see price rise, so we wanted to walk till prime minister’s House and show the high inflation, show the gas cylinder whose price is sky high,” she said.

“There is no inflation for Modiji, he has given away the country’s wealth to 2-4 people….Two-four people have become very rich, but the common person is suffering. They have a lot of money, they can’t see price rise. Flour, rice, cooking gas have all become expensive,” she said.

Note: This is a developing story and will be updated as new information becomes available.