All Around Us, Narendra Modi's Messiah Image Is Quickly Fading

The growing loss of faith in the prime minister arises from the same source from which faith had been generated: his self-centredness. 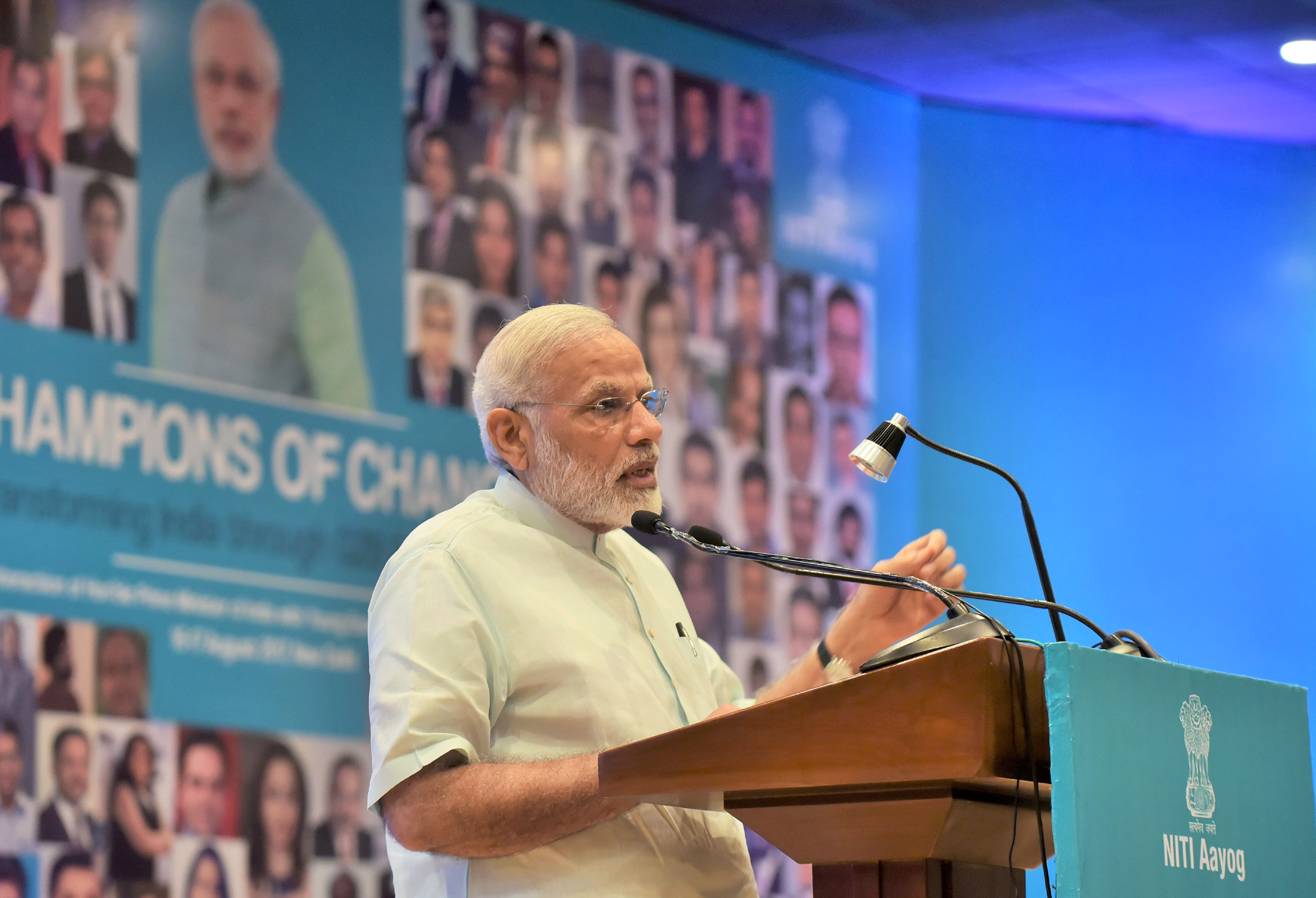 Remember the year or so prior to the May 2014 elections? The adoring Indian media could not imagine how the country had survived without Narendra Modi for 67 long years. Every little speech of his in a remote high school or a Delhi college became the news, wiping out all other national or international events – good, bad or indifferent – for a day-and-a-half from TV screens. The social media, such as it was, wouldn’t tire of singing songs of gratitude for being around when the messiah had made his appearance. The messiah himself added all he could to the making of the myth around him. In his speeches, he invariably asked his massive audiences what had they gained in the six decades or so since independence, and the audiences loudly responded with “zero”, which in any case is an Indian invention. All was set to change to a golden age, “achhe din” in 60 months, he said reassuringly. Of course, just about 31% of those who actually voted – and thus around 21% or 22% of the total electorate, or around 12% of the Indian people – fell for his reassurances. But given the nature of our first-past-the-post democracy, this was enough to become a massive mandate.

Has the tide begun to turn? With all the messiah’s promised and unpromised actions falling flat – and more devastatingly being seen to be falling flat – and with “others” having caught up with social media, no prime minister in one’s living memory has been, and is being, lampooned daily on WhatsApp, Facebook and other social media as much as Modi, and I have been around long enough to witness the oath taking of all prime ministers from Jawaharlal Nehru onward. The lampooning comes in jokes, cartoons, videos, in reminders of what his dear colleagues like Uma Bharati had to say earlier of his “vikas purush” image (“vinash purush”) and above all in replaying video clips of his own wild promises.

Quiet lampooning in a prevailing atmosphere of fear is always the most devastating challenge to authority; the Soviets discovered it at a high cost when the lampooning of leaders, and indeed the whole system, hit its peak in the 1980s. Rumours are another, which eroded Indira Gandhi’s emergency regime.

With Modi’s tall promises visibly collapsing, all the schemes he launched with a lot of fanfare and hyperbole coming a cropper, his disastrous experiment with demonetisation and the “tryst with destiny”-style launching of the atrociously-managed Goods and Services Tax, his brand as the messiah who will lift India from its morass seems inevitably to have faded, and that too in a short three-plus years.

If the legitimacy of several earlier prime ministers fell through quickly, the reasons were faction fights or incoherent coalitions. None of these are relevant to the current scenario, where an enviable majority and popular acceptance and acclaim gave Modi a solid opportunity to implement his promises at least in part. The growing loss of faith also arises from the same source from which faith had been generated: his self-centredness. The loss of faith is increasingly as visible in his own camp as in civil society. The BJP’s Bharatiya Kisan Sangh, the Bharatiya Mazdoor Sangh, the multiple traders’ groups and organisations around the country who still admit to having voted for Modi, the youth (the mainstay of his support base) – all of them are restive after what he has done to the economy.

The 1,000-word article in the Indian Express by Yashwant Sinha, a long-time BJP insider, would have been quietly ignored if it hadn’t touched the core of the government’s economic failures. Since then, many more straws have been blowing in the wind decisively pointing to its direction. The victory of Ahmed Patel in the face of the mobilisation of every single resource by the BJP demonstrating holes in its image of invincibility; the loss of students’ union elections in one university after another indicating the loss of a huge support base among the youth; the snatching of the BJP seat in Gurdaspur by the “ICU-based Congress” (Amit Shah’s words); The Wire placing before the public the business transactions of Jay Amitbhai Shah, the party president’s son, which the BJP has found so embarrassing because of Modi’s promise of transparency that had created so much euphoria; and the videos on social media depicting either absent or hostile crowds in BJP leaders’ election meetings in Gujarat – are these each an isolated straw or do they cumulate into something of a breeze, if not a storm? It has also nearly checked the prospects of Modi manoeuvring the 2019 elections with the promise of more “vikas” along the lines of what he has delivered. What will then be the issue?

Mohan Bhagwat’s Dussehra address and the more recent RSS ‘samanvay baithak’ seem to have laid down the parameters of the next election issue. Their plea to the government to keep in mind the interests of the small farmer and medium and small businesses is also an admission of the BJP’s failure on that front. They have, therefore, brought into high focus the alleged security threat posed to the nation by the Rohingya Muslims, in which the Rohingya part is secondary, the Muslim part remains primary. This would enable the government to encircle Muslims as a whole as the single most urgent security threat facing the nation, arguing that Hindus must unite and vote for BJP. A second option, a skirmish with Pakistan, appears a little riskier.

Also read: Modi Loves to Speak. So Why is He Silent on Jay Amitbhai Shah?

A kite was also flown on October 2 when Anna Hazare expressed his desire to relaunch his agitation for a lokpal. Is the Sangh parivar trying to occupy the opposition’s space as earlier?

There remains the TINA (there is no alternative) factor, which will be thrown onto our face as the BJP’s chances slide – ‘Name anyone who will stand up to Modi’s stature’. However, there are two reservations the TINA factor will need to encounter. Recall that back in 2004 when India was shining and the media went gaga about it, when the late Pramod Mahajan had an army of young computer-savvy assistants to help him with the smallest data about the remotest constituency at the tap of a key, when the opposition was completely at sea, when Atal Bihari Vajpayee’s shining record of governance and foreign policy and no one approaching within a long distance of the respect he universally commanded, the TINA factor did not win the BJP the election.

More importantly, no matter how much parliamentary elections in India have veered towards the presidential form, the system has tended to come back to electing MPs rather than the prime minister. This even more when the candidate’s earlier appeal begins to fade.

Wisest are those who do not take the Indian voter for granted.