In deal, UNC leaders to be released from jail, BJP govt to begin consultation with “all stakeholders” over creation of new districts 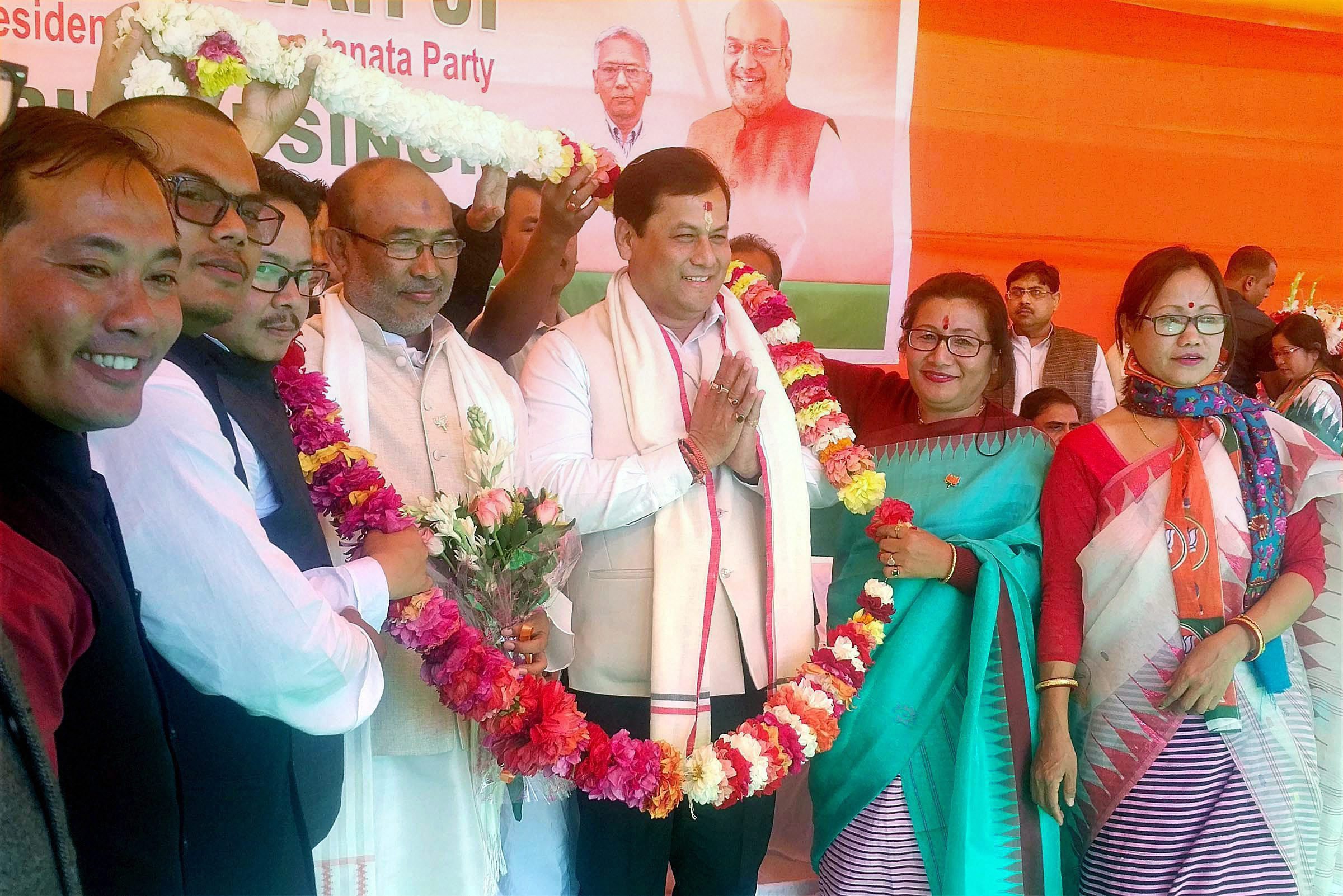 New Delhi: The over four -and-a-half month long economic blockade in Manipur ended on March 19 night after tripartite talks held by the central and the state governments with the leaders of the United Naga Council (UNC) concluded successfully in Senapati town.

As per the resolution taken at the meeting, the blockade – called since November 1, 2016 by the UNC against the erstwhile Okram Ibobi Singh government’s decision to create new districts by bifurcating “Naga ancestral land” — was to be lifted from March 19 night following an agreement that the state government would “start consultation with all stakeholders to redress” the issue.

It was also agreed to “unconditionally release” the UNC president Gaidon Kamei and publicity secretary Sankhui Stephen from jail and “all the cases related to economic blockade against the Naga tribe leaders and student leaders will be closed.” Kamei and Stephen have been lodged in an Imphal jail since November 25. 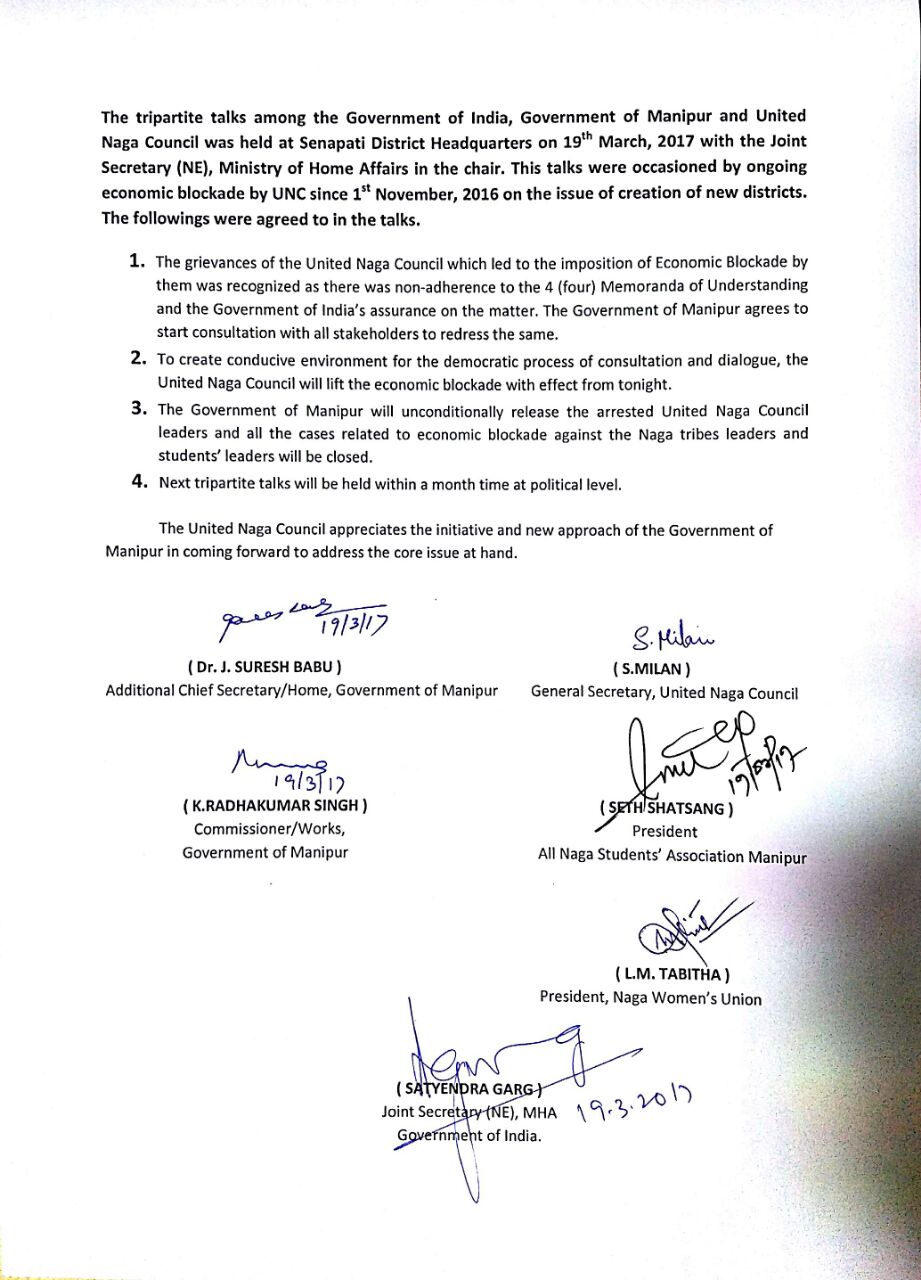 The meeting led by Satyendra Garg, joint secretary (north east) at the Union ministry of home affairs, agreed to “create (a) conducive environment for the democratic process of consultation and dialogue.”

The central government “recognised” the grievances of UNC “as there was non-adherence to the four Memoranda of Understanding” signed between the state government and also with the centre with the Naga civil society organisations as per which all stakeholders would be consulted before creating a new district in the Naga inhabited areas.

The Congress government decided to create seven new districts in October last year. The UNC took offence, particularly to the creation of the districts of Jiribam and Kangpokpi. Creation of Kangpokpi as a full-fledged district has, however, been a decades-long demand of the Kuki tribe inhabiting the area. The Kukis and the Nagas engaged in ethnic violence in the early 1990s.

As per the resolution of the March 19 meeting, signed by Garg besides UNC general secretary S. Milan, All Naga Students Association Manipur president Seth Satshang and the government of Manipur’s additional chief secretary (home) J Suresh Babu and K. Radhakumar Singh, commissioner (works), “The next tripartite talks will be held within a month at the political level.”

The blockade, clamped on the two arterial national highways – NH2 and NH37 – that link Manipur to the rest of India, had been affecting the supply of essential commodities, particularly fuel and cooking gas, across the state. While the price of petrol went up to Rs 200 a litre, that of an LPG cylinder went up to Rs.2500.

Common people reeled under its effect even as the then Congress government and the Bharatiya Janata Party (BJP) government at the centre traded charges against each other of “not doing enough” to lift the blockade from the poll-bound state.

The economic blockade was one of the poll issues in the recent election. On March 8, addressing an election rally in Imphal, prime minister Narendra Modi said, “No blockade will be allowed once the BJP comes to power.”

Taking over the reins of the state on March 15, BJP chief minister N. Biren Singh promised to lift the blockade within 72 hours. A day later, as per a party press note, the new government initiated the process to lift the blockade in a special meeting with cabinet ministers. Naga people’s Front (NPF), close to the UNC which supported the blockade, is a part of the BJP government.

Prior to the assembly elections, multiple rounds of talks were held by the state and central governments with the UNC which were inconclusive and failed to lift the blockade.