After Ram Mandir Inauguration, It's Time to Introspect, Not Mourn

We must realise that even if this intolerant regime is defeated, the poison it has encouraged is now deeply embedded. We may bemoan the endless assaults on the secular polity and scream from every rooftop, or even add our names to ready-to-sign electronic petitions, but the fact is that we have lost this round, quite decisively. It is time for us to seriously introspect, not fume with rage or lament. After all, history may very well turn around and ask what we were doing during the 28 long years that separated the two tragedies of 1992 and 2020.

We may respond with self-righteous indignation and state how hard we had tried to explain to the people of India that Ram and Ramayana are completely mythical and that there is no archaeological evidence to prove there was any temple that could have been destroyed to build the Babri Masjid.

But then, the highest court has ruled last year that the structural materials found by the Archeological Survey of India at the site of the vandalised mosque appear to be of Hindu origin. It has quoted verbatim a high court judge’s scathing criticism of the report of our much-respected ‘Historians Group’ and more importantly, it has informed us that the “faith and belief of Hindus” are very critical.

One can argue about several items of evidence cited by their lordships, but then when we look up, we often see a sword of Damocles dangling so precariously over our heads. In fact, the court appears to have transcended its usual firm insistence on upholding the words of law — that often led to ‘the law’ prevailing over ‘justice’. It has apparently legitimised a form of ‘adverse possession’, the real consequences of which may unfold with time.

It surely hurts when the verdict repeatedly castigates the undoubted criminality in destroying the mosque in 1992, but does not direct that due punishment be surely inflicted within a short date — as it had stipulated for handing over the disputed plot for the Ram temple. It is a paradox of history that a judgment has actually fulfilled what the destroyers of the mosque had sworn all along – mandir wahin banayenge (we shall build the temple there). Liberals do not appear to have taken that oath so seriously.

Also read: Temple of the King

No effective steps were visible to compel the ‘liberal-secular’ governments that had ruled India for two-thirds of the long interregnum of 22 years between 1992 and 2014 to demonstrate seriousness in restoring the balance. We may remember that the court had also given quite some time to the warring parties for a compromise, and if only the writing on the wall was clear, a part of the disputed plot may have been saved with honour.

But having said so, and after not saying a lot that could be said of the verdict, we may still like to remember that the judgment, with all its homilies, was not delivered singly by a controversial chief justice who switched to politics. It was also agreed to by two other chief justices, the present one and a future one, as well as two senior judges.

We may also recall that it was the ‘secular’ Congress government that had pumped religious adrenalin, week after week between January 1987 and August 1988, by telecasting Ramayana over state-run television. This aroused unprecedented levels of Hindu religiosity and fervour, but not a single Indian scholar of repute took the trouble to study and highlight the direct relationship between the epic-on-TV and the frenzy and war-cries that were whipped up by Advani and cohorts, throughout 1989. Only Arvind Rajagopal has tried, but he is at New York University.

Many left-liberals ignored or derided the outrageously-ingenious strategy of the Sangh parivar that successfully involved millions by collecting Shri-Ram-inscribed bricks from every corner of India. Doordarshan, of course, continued till 1990 to inject repeater doses every Sunday to the people, with its new Mahabharata serial. Never before had Hindu deities, heroes and heroines appeared so live, so vibrantly colourful and right within touching distance of the mesmerised masses. The point is that the 1984 Ayodhya and 1986 resolutions of the Sanghis and ‘sadhus’ would hardly matter had not a flamboyant information minister, Ajit Panja, and his powerful secretary, S.S. Gill roped in Ramanand Sagar and B.R. Chopra to Bollywoodise Hinduism.

L.K. Advani was shrewd enough to harvest the golden crop of these ‘calendar art’ films on TV. Even Rajiv Gandhi facilitated Advani’s mission by permitting the Shilanyas ceremony near the disputed site on November 9, 1989. Naturally, the BJP’s tally in the Lok Sabha elections held only a fortnight later catapulted to 85 from just 2 seats in 1984 — while the Congress was unceremoniously voted out of power. It is not clear whether Rajiv Gandhi knew what he was doing when he got the locks of the Babri Masjid opened in 1986 or understood how retrograde (and self-defeating) his anti-Shah-Bano legislation was.

The crafty V.P. Singh, however, knocked the BJP on its head in August 1990 as he realised that it was exploiting its support to his government only to further spread its communal poison. Singh split the Hindu vote by implementing the Mandal Commission’s report and reserving 27% of seats in education and elections for the ‘Other Backward Castes’. The other controversial decision that really spiked the wheels of Advani’s immensely successful Ratha Yatra was that of Mulayam Singh Yadav, the chief minister of Uttar Pradesh. His government shot and killed some 27 uncontrollably aggressive kar servaks at Ayodhya on October 30 and November 2 of the same year. Lalu Prasad in Bihar arrested and halted Advani, but we can hardly recall any hard decision taken by the secular Congress or the Left parties. Both of them did not thus utilise their capacity to mobilise the masses.

As for left-liberals in the academia, media, the arts or elsewhere, they were no match for fanatic hordes. They resorted, therefore, to erudite papers and articles and lectures to the already-convinced. We cannot now fret that all is lost — but this losing streak was evident even in the earliest phase. We hardly had any option when Narasimha Rao cunningly abdicated his responsibilities on December 6, 1992, when the mosque was being torn down. What is surprising is that he was none the worse for it — which demonstrates that the nation was not as bothered as was the Muslim community, that bore the brunt of planned riots, and, of course, the hard core left liberals who were aghast. In short, we had neither Plan A nor Plan B to stop the juggernaut.

But let us now remind ourselves that, as liberals, we need to open our minds to all viewpoints. The first fact we have to admit is that Nehruvian secularism died when India accepted the destruction of the mosque in 1992. However hateful it is for us, we know that millions of Hindus actually rejoiced at that time and thereafter. After all, they were indoctrinated to believe that it was a hated symbol of unchallenged Muslim hegemony of several centuries.

In 1975, Indira Gandhi’s education minister officially blessed the Archaeological Survey’s project – called the ‘Archaeology of Ramayan Sites’ – and we remained silent all through about the undisguised communalism of its leader, B.B. Lal and his team, that is still proving that the Ramayana is truly historical. Again, though most archaeologists and historians are aware that numerous edifices of Buddhism were destroyed – in Bengali, for instance, the term for ‘ruins’ is dhangsha-stupa or the ‘destroyed stupa – or appropriated by Hindus, this line of research was never given much importance.

If students and society at large had been gently acclimatised, over several decades, to appreciate that all religions have gone through phases of aggression, the ‘victim psychology’ that is propagated amongst Hindus (and deeply ingrained) could be contended with. Besides, several Congress governments had outsourced the task of deciding school curriculum and even college syllabi to the left and its fellow-travellers. But while the latter ensured classical Nehruvian secularism was enshrined, they did not take up the subtle countering of propaganda specific to the Indian context.

Another fact is that while sarkari secularism gave mandatory holidays during every important religious festival, no one made the effort to explain the fine sentiments that lie behind them. This education would surely have contributed to a better understanding, instead of living in rival silos nursing old prejudices. But then Marxists and western-educated liberals shy away from religion as hocus locus best left to fanatics. Nehru had used the exact phrase “horror of religion”, and such antiseptic sanitisation did a lot to alienate the liberal elite from the god-fearing, god-loving masses. The field was left wide open to mythologists and communal elements to exploit Hinduism, Islam and even Sikhism. 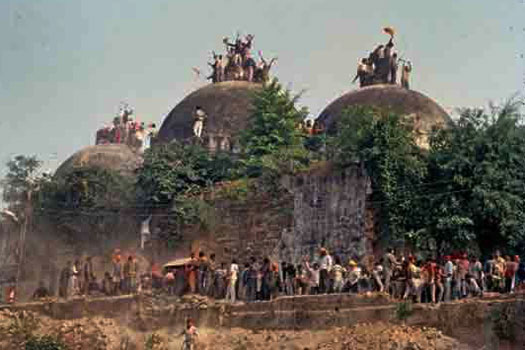 The demolition of the Babri Masjid. Photo: PTI

The branding of English speaking left liberals as a foreign-inspired elite may thus not be wholly untrue. When Modi-Shah decry the Lutyens’ or ‘Khan Market’ gangs, they obviously pour their bitter bile out against this small influential class that opposes their raj. Even the bias against English in the New Education Policy and the visible contempt for higher education stems from the same fury against the dominance of the English-speaking strata. While introspecting, the next fact that we need to admit is that we had left the defence of secularism completely to government, which did precious little to stem the rot.

In Bangladesh, however, students, teachers and members of civil society took to the streets from 1989 — to agitate against the totalitarian and overtly communal government of General Ershad. This Mangal Sobha-Yatra consisted of millions (yes, millions) joining massive processions on the Bengali New Year’s Day in all towns and citizens as a mark of defiance against Islamic fundamentalism. For 31 years, they have warded off threats from pro-Islamic governments, Muslim fundamentalists and terrorists. Unless secularism and anti-authoritarianism enter our blood stream like this and we can galvanise the masses, Indian liberals will remain an ineffective caucus, incapable of resisting attacks on the soul of India.

The major truth that many of us need to digest is that the Ramayana actually represents one of the cores of this civilisation and it is not wise to allow it to be misappropriated by narrow, chauvinist elements. There are other cores too, but in the absence of a Vatican or one revealed holy book, the two epics have played a unique role in conveying what a very amorphous Hinduism stands for. They also provided for immense flexibility to accommodate differing ideologies and even contradictions. The Hindu way of life evolved over three millennia, harmonising diverse centrifugal and centripetal forces. ‘Ram Rajya’, for instance, stands for just rule and Mahatma Gandhi was fond of using this term that modern intellectuals would baulk at. This is why it was hijacked by those who killed Gandhi.

To ignore the resurgence of pride in Hinduism is perilous and we need to keep a watch over Kashi, Mathura and other flash-points. We will require patient chemotherapy, not outbursts of scorn, to combat the unshakable belief that India was unimaginably glorious before Islamic and British rule destroyed it all. After all, we have faith in people of India and know that most of them are peace loving. To tap this reservoir calls for empathy with religion and we need the indefatigable energies that our visionaries had displayed when they forged a nation out of incredible diversity.

We must realise that even if this intolerant regime is defeated, the poison that it has encouraged is now so deeply embedded, that we have to learn to live with a lot of Hindu bigots, as we have with terrible fanatics of all religions. We may discuss strategies to restore the fundamental tolerance and plurality of India, only after we stop alleging or bemoaning – and accept facts with the brutality of clarity.

Jawhar Sircar is a former IAS officer who was secretary, Ministry of Culture, Government of India.