UP Elections: Inside the Political Storm Engulfing the Shikhar Gutka Group

Amidst all the political mudslinging surrounding the tax raids on the Gutka manufacturer, a history of tax troubles and a stake in a real estate firm thriving under Modi’s 'Housing for All Scheme' raise several questions. 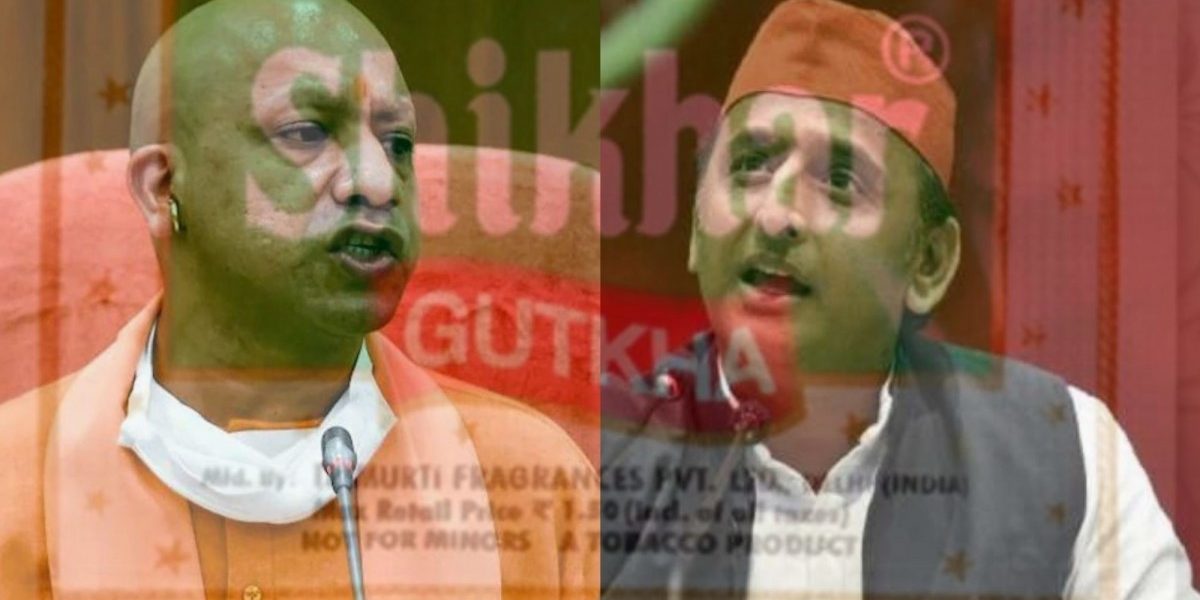 New Delhi: Pan masala manufacturer Shikhar Gutka Group, which was catapulted into the maelstrom of the UP elections last month, is no stranger to tax raids. Data accessed from the Ministry of Corporate Affairs (MCA) database indicates that the company has been on the receiving end of recurrent raids by the tax authorities, the earliest one going as far back as 2003.

The MCA documents also curiously reveal that as of FY’20, the manufacturers of Shikhar Gutka are investors in a New Delhi-based real estate company, Signature Global Private Limited, that has thrived over the years by aligning its business model with Prime Minister Narendra Modi’s flagship scheme, the Pradhan Mantri Aawas Yojana.

The tale of two P. Jains

Earlier in December, in the run-up to the fiercely contested Uttar Pradesh assembly elections, news broke that the Directorate General of GST Intelligence (DGGI), Ahmedabad, with the aid of local officers of Central GST Office, raided the factory premises of Trimurti Fragrances Private Limited, the company which manufactures Shikhar Gutka in Kanpur.

The office and godowns of Ganpati Road carriers, run by one Praveen Jain, were also raided. Following up on this investigative lead, the DGGI ended up raiding two houses and the factory premises of his relative Piyush Jain, which reportedly led to the discovery of the biggest illegal stash of cash in the history of the Central Board of Indirect Taxes and Customs (CBIC), under which the DGGI operates.

In the aftermath of the raid and the controversy it generated, Modi, at an election rally, hit out at the Samajwadi Party (SP) by saying that the “perfume of corruption” that they had sprayed all over UP prior to 2017 is for all to behold now. UP chief minister Yogi Adityanath also alleged that the stash recovered from Piyush Jain’s house belonged to the SP.

In turn, SP chief Akhilesh Yadav responded by saying that the central authorities had raided the “wrong Jain”, who had connections with the BJP rather than the SP. Yadav said that SP’s ‘Jain’ was actually Pushparaj alias ‘Pampi’ Jain, a member of the legislative council (MLC) whose perfume, ‘Samajwadi Ittr’, had been launched by the party in November. “You should get out his (Piyush Jain’s) call details and you will find BJP people’s names,” Yadav said.

While both Jains – Piyush and Pushpraj – are facing the heat from central authorities, the directors of Trimurti Fragrances, Pradeep Kumar Agarwal and Deepak Agarwal, haven’t been subjected to the same regulatory crackdown. (Technically speaking, Pradeep Kumar Agarwal resigned from the position of director on December 6 last year. However, he had been the director of the company since 1994 and owns half of the shares of the company. The other half are held by his nephew, Roshan Agarwal.)

The sole instance of coercive action against the Agarwals is seen in a December 27 press release issued by the Ministry of Finance which states that the “manufacturers of Shikhar brand of pan masala/tobacco products have admitted and deposited an amount of Rs 3.09 crore towards their tax liability”.

This softball treatment of the Shikhar Gutka manufacturers seems peculiar considering the DGGI officers kicked off the raid by intercepting “four trucks operated by M/s Ganpati Road Carriers carrying pan masala and tobacco of said brand, cleared without payment of GST”. In the course of their investigation, they reached the conclusion that “the manufacturer was indulging in clandestine removal of goods with the help of transporter who used to issue fake invoices to manage the transportation of said goods.”

When The Wire spoke to a senior DGGI official on what action was being taken against Trimurti Fragrances, he said, “There is nothing to add at present other than what has been stated in the press releases of the DGGI. If there is any further development of significance, it will be shared with the press at the appropriate time.”

The newindian.in, a news portal, recently reported that summons had been sent to directors Pradeep Kumar Agarwal and Deepak Agarwal. When The Wire tried to corroborate this news report, the senior officer responded that “necessary investigations are going on as per law”.

As per Trimurti Fragrances’ latest financial statements, the company earns 99% of its revenue from the manufacture and export of pan masala and less than 1% comes from its wind energy business.

The company’s registered office is in Kanpur and operates factories in several locations across the country: two locations in Kanpur, six locations in Delhi, one in Ghaziabad, one in Manesar and one in the Special Economic Zone (SEZ) of Kandla in Gujarat’s Gandhidham, for export purposes. The company’s windmills are located in Madhya Pradesh and Karnataka.

The group was established in October 1994 “with a single manufacturing unit housing only one machine” and within the first two years of its launch, managed to create a niche for itself in the Bihar market.

Despite the intense competition in the pan masala/gutkha/khaini segment, the company has been able to consolidate its market position, helped in large measure by its wide and versatile portfolio of products. The company has been exporting its products to Gulf countries, Singapore, Malaysia, Thailand and Africa for a few years now.

The share capital of the company is equally divided between Pradeep Kumar Agarwal and his nephew Roshan Agarwal, each of them holding 10,150 shares.

Old tryst with the taxman

This is not the first time that the Shikhar Gutkha group has found itself under the glare of central authorities. On July 2, 2003, income tax authorities investigated Trimurti Fragrances factory premises, residences and offices in Kanpur as well as Delhi and had found Rs 5.5 crore cash at Pradeep Kumar Agarwal’s Delhi residence.

Pradeep Kumar Agarwal had then deposed, under oath, that the cash belonged to his then 74-year-old father Murli Dhar Agarwal who, he claimed, was in the speculation business.

The company found itself at loggerheads with various tax authorities over the following years:

The Trade Tax Department, Delhi has raised demands of Rs 1.29 crore, Rs 2.29 crore and Rs 3.02 crore for assessment years (AY) 2002-03, 2003-04 and 2004-05 respectively, along with interest. Subsequently, the company had filed an appeal with the Delhi Value Added Tax Appellate Tribunal, deposited Rs 2.82 crore against the demand raised for AY 2003-04 and furnished a bank guarantee of Rs 2.25 crore. Currently, there is an appeal pending in the Supreme Court against this demand.

A demand of Rs 16 lakh was then raised by the mobile unit of the Commercial Tax Department, UP, related to FY’17 against which Rs 2.4 lakh was deposited as security in October, 2016, As per the company’s FY’20 financial statement, the case is pending before an assessing authority.

GST officers carried out another raid on February 18, 2018 and levied penalty of Rs 2.62 lakh. An appeal against that order is pending in the Allahabad high court.

Goods were seized once again on June 22, 2019, by the Assistant Commissioner (Mobile Squad- I), G.B Nagar and an IGST, cess and penalty of Rs 49.31 lakh was demanded from the company. Three days later, the company deposited the demand and filed an appeal before the Additional Commissioner (Appeals), Commercial Tax, Noida which was decided against the company on December 3, 2019. The Company has not yet filed an appeal in this case, either before a tribunal or the Allahabad high court.

Apart from this, Trimurti Fragrances has not invested in any other company and, apart from investments in a mutual fund, the company has no other long-term investments.

The Wire emailed a comprehensive set of questions to the directors of Trimurti Fragrances seeking to understand the company’s rationale behind investing in Signature Global.  Rajendra Kumar Saraf, one of the managerial directors of the Trimurti Fragrances, responded by saying that he was out of town and would contact this reporter once he returned. On further prodding, Saraf asked for another day to respond to the questions. At time of publishing, he has not responded.

Pradeep Kumar Aggarwal is also the chairman of the Associated Chambers of Commerce & Industry of India’s (ASSOCHAM) national council on real estate, housing and urban development. As per its website, ASSOCHAM is the country’s oldest apex chamber, working as “a conduit between the industry and the government.”

Signature Global and its subsidiaries’ business is focused on affordable housing projects. The group also supplies construction materials and provides construction services based on construction contracts.

Moreover, one of the subsidiaries of the group is a non-banking financial company and the group also has investments in an associate company that is engaged in the business of information technology services.

The company’s substantial revenue stems from its alignment with the Haryana government’s Deen Dayal Aawas Yojana (DDAY); an initiative to encourage the development of high-density plotted colonies in Haryana’s medium and low potential towns through “a liberal policy framework”. The scheme was meant to control the mushrooming of unauthorised colonies and is part of Prime Minister Modi’s “Housing For All, 2022” mission.

An advertorial carried in the Indian Express on January 17, 2020 gives an insight into Signature Global’s business. In it, Pradeep Kumar Aggarwal says, “The vision behind establishing Signature Global and entering real estate, particularly the affordable housing business was to make a significant contribution to meet the housing need of masses by providing homes at an affordable price. We synchronised our mission of ‘Har Parivaar, Ek Ghar‘ with the Modi government’s flagship mission of ‘Housing for All’ and the Pradhan Mantri Awas Yojana (PMAY), focusing on affordable housing, providing incentives to both developers and home buyers.”

According to its website, Signature Global has a portfolio of 36 residential as well as retail projects, some of which are currently under construction. In fact, Signature Global is bullish on growth not only in Haryana, but also in Jammu & Kashmir. The company is one of the real estate firms that will be contributing close to Rs 2,000 crore of the Rs 18,900 crore committed investments of in the union territory. The Rs 2,000 crore is to be channelled into building 10,000 housing units.

“Segments such as holiday homes, rental housing and office and commercial spaces will now prosper in the region. After a few months, things will be in total control and people can actually think of investing in J&K. There is a need to come up with affordable housing and we would definitely like to contribute towards achieving it,” Pradeep Kumar Aggarwal told Mint in August 2019. 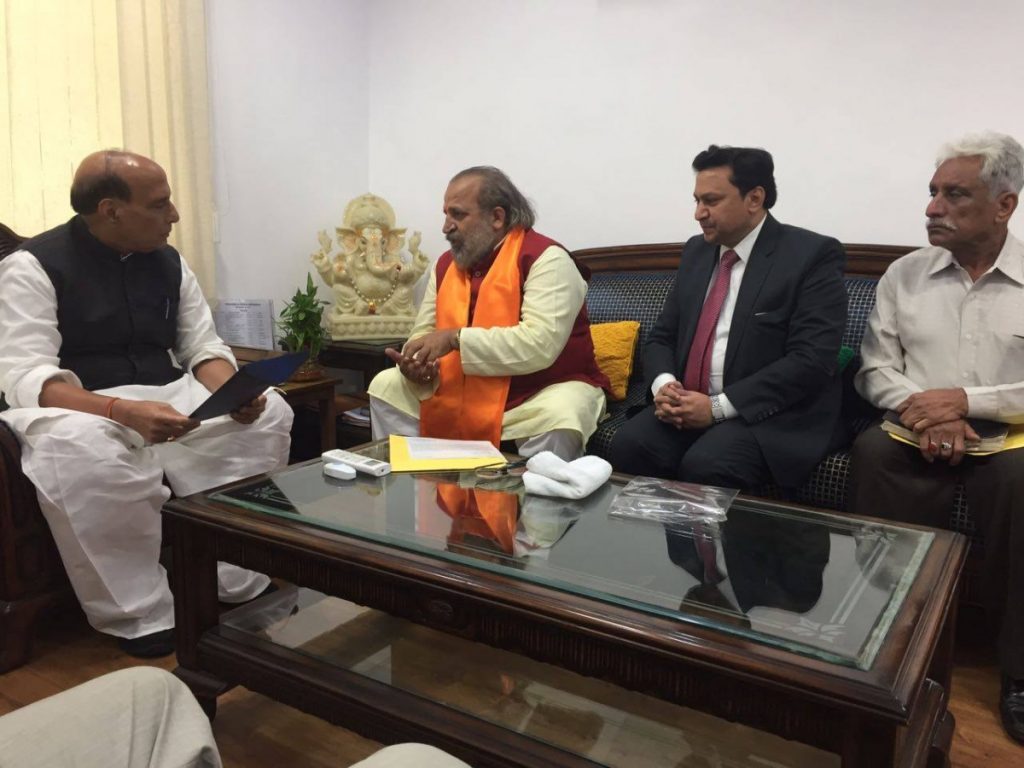 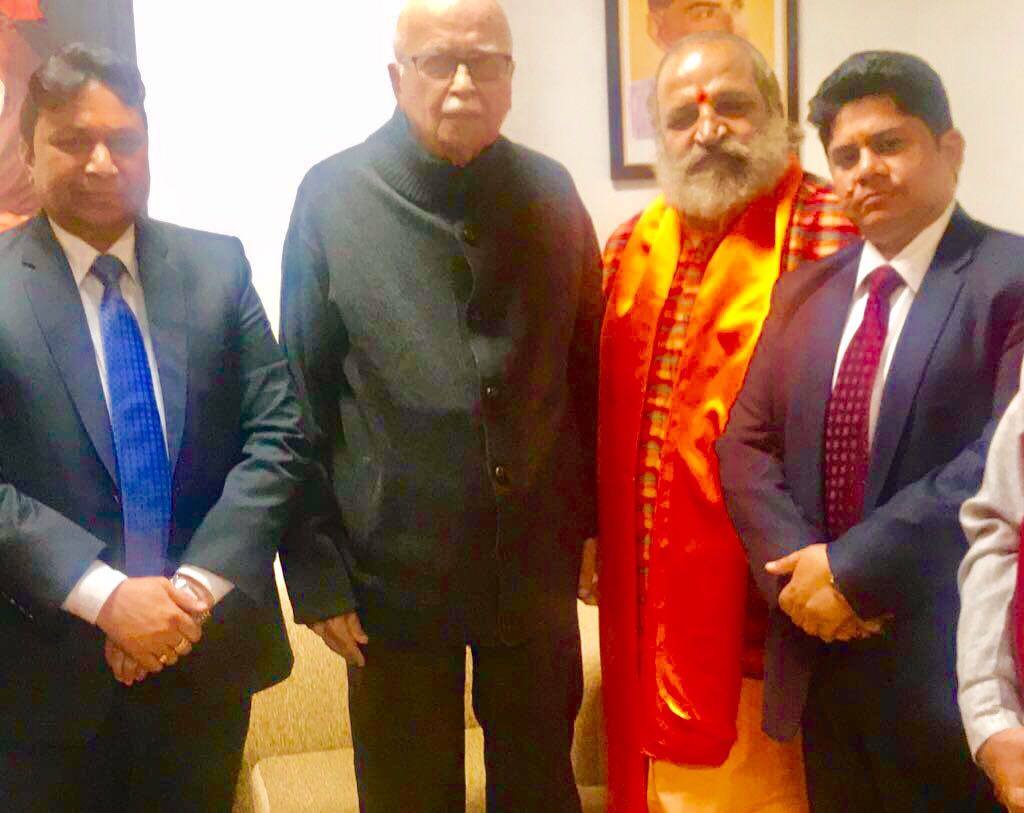 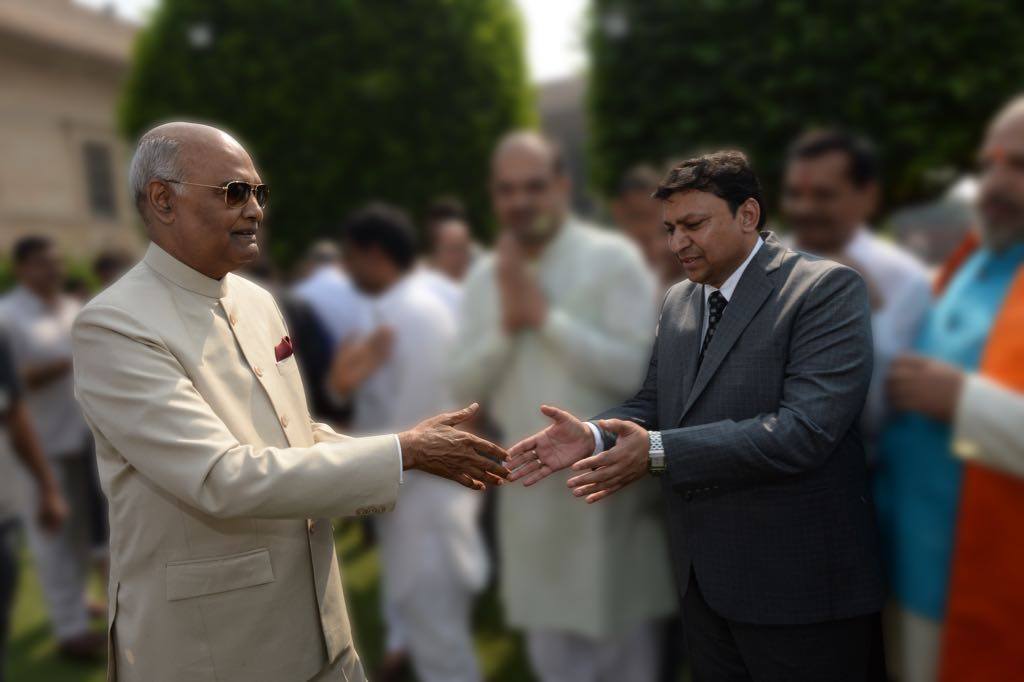 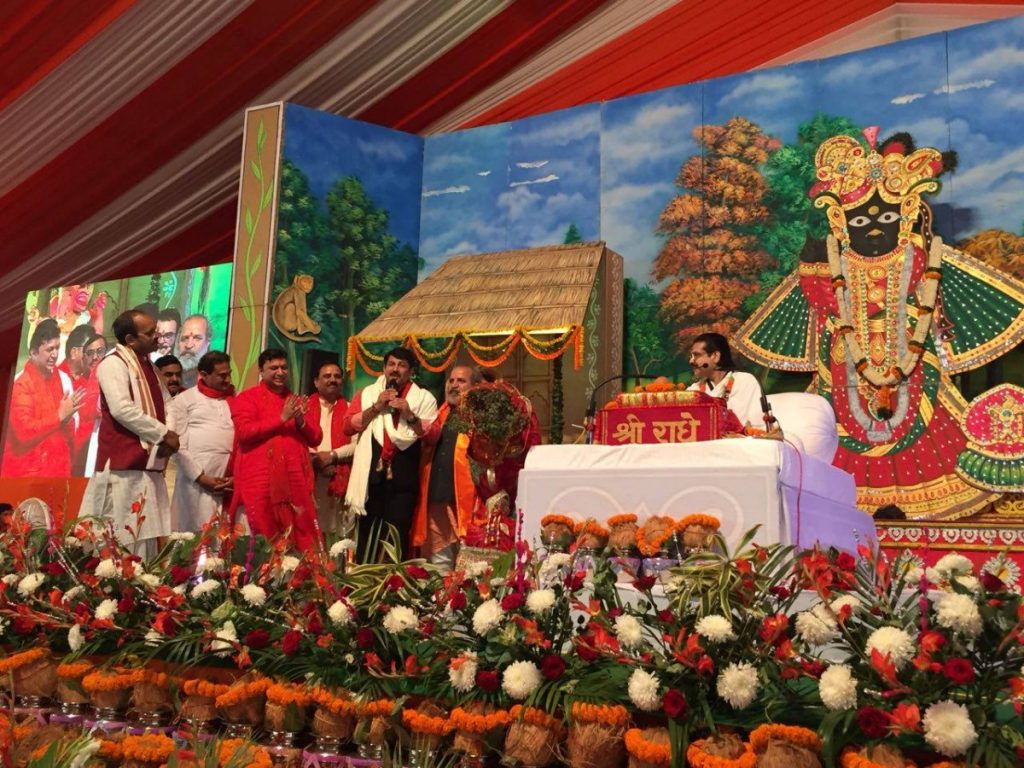 Incidentally, Sarvapriya Securities Private Limited, which is the promoter of the Signature Global mall in Ghaziabad’s Vaishali and also one of the subsidiaries of Signature Global, also shows up in the BJP donors list. The company contributed Rs 2.5 lakh in FY’20.

The Wire sent Pradeep Kumar Aggarwal a list of questions concerning the company’s business growth trajectory. Aggarwal redirected The Wire to Jayanta Barua, an employee of the company’s media team, who noted that there are no business or familial ties between the two Pradeeps. However, Signature Global’s shareholder list, as of March 30, 2020, showed that both Trimurti Fragrances and Pradeep Kumar Agarwal have a stake in the company. Barua did not respond to The Wire‘s email highlighting this fact.