New Delhi: A journalist employed at a news channel belonging to the India Today Group has claimed that he was fired from his job for two tweets critical of Prime Minister Narendra Modi. His employers have said he was in violation of the Group’s social media policy.

Shyam Meera Singh had been working at the online edition of the Aaj Tak news channel since December, 2020, he told The Wire.

On Monday, July 19, Singh tweeted that he was terminated from Aaj Tak because of his tweets on the prime minister.

I am terminated from my channel Aaj Tak (India Today Group) for writing these two tweets on Prime minister Modi. pic.twitter.com/L6JRlC3RDi

The second tweet, written mostly in Hindi, translates to, “When I write something on Twitter, people start tagging my organisation telling them to fire me. I make sure that the next tweet is stronger…I will not back away from writing that Modi is a shameless Prime Minister.”

Singh next tweeted screenshots of a purported termination email sent to him. It reads:

“This is further to your continued social media violations, despite previous warnings. You are well versed with ITG’s (India Today Group) social media and code of conduct policies which specifically advise to use social media for news that has been published or aired by the system and not for personal views.”

Singh tweeted that the mail also had two attached screenshots of his two tweets on Modi.

India Today Group mailed me screenshots of these two tweets, giving reasons for termination, which were on Prime Minister Modi. pic.twitter.com/Q7Vx2P7adB

In October last year, the India Today Group had issued a notice prohibiting its employees from airing personal political views on social media platforms. The advisory also said that those on contract with the India Today Group can only use their personal social media handles to post or promote content belonging to the Group that has been used in print or digital media, or on air.

While speaking to The Wire, Singh said that this was an issue of curtailment of free speech, and that the Supreme Court has, several times said in its judgments, said that if any act, rule, bill, or code of conduct violates the fundamental right of freedom of speech, it would be considered null and void.

“India Today or any other institution cannot snatch away the right to free speech in the name of code of conduct,” he said.

He added that even though he respects “India Today’s contribution to journalism as well as its founder Arun Poorie,” this matter cannot be overlooked.

He added, “These codes of conduct in media institutions are not their own codes. They are imposed on them by the Prime Minister’s Office and the Union home ministry.”

The Wire also reached out to the India Today Group for comment. India Today Group responded by saying that Shyam Meera Singh’s services were terminated due to a “repeat violation” of the social media policy of the Group.

In its statement, the Group said that Singh violated the policy on two accounts: first, he went against the advice of the India Today Group’s Social Media and Code of Conduct policies to use social media for news, and secondly because he failed to keep the news ecosystem  “healthy” and “abuse-free.”

India Today also said that Singh continues to violate the company’s policies by “not removing his association with our company from his social media handles and by sharing confidential internal emails between employer and employee.”

However, at the time of publication of this report, the Twitter bio that Singh had was: “Journalist, terminated from @aajtak.” 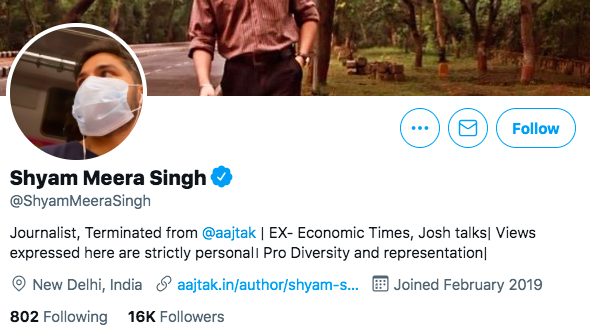 Further, India Today Group said, “As a market leader, it is our responsibility to keep our news and social media platforms safe for people who want to have constructive conversations within the realm of dignity, civility, and decency.”