Ravi has said that "media houses have published one-sided defamatory, suggestive innuendos, and half truths about the petitioner". 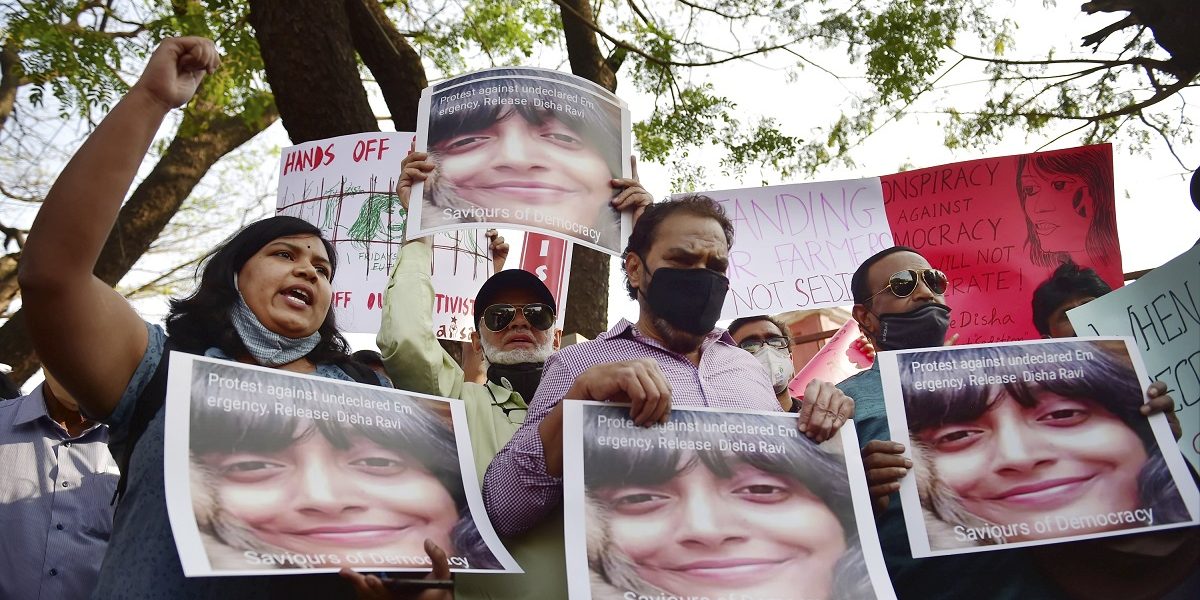 Members of various organisations display placards during a protest against the arrest of climate activist Disha Ravi, in Bengaluru, February 15, 2021. Photo: PTI/Shailendra Bhojak

New Delhi: Climate activist Disha Ravi, arrested by Delhi Police for editing a ‘toolkit’ document supporting the ongoing farmers’ protest, moved Delhi high court on Thursday, February 18, seeking to restrain police from leaking to the media any material in relation to the FIR lodged against her.

The petition, which was heard by Justice Prathiba M. Singh, also seeks to restrain the media from publishing the content or extract of any private chats, including those on WhatsApp, between her and third parties. Justice Singh has said that the matter requires “consideration”.

The court has issued notice to the News Broadcasting Standards Authority and few media houses regarding publishing extracts of Ravi’s private chats, Indian Express has reported.

Solicitor General Tushar Mehta told the high court that the police had not leaked any investigative material.

Ravi, in her plea, said that she is “severely aggrieved and prejudiced by the media trial surrounding her arrest and the ongoing investigation, where she is being viscerally attacked by the respondent 1 (police) and several media houses”.

She also said that her arrest from Bengaluru on February 13 by a Cyber Cell team of Delhi Police was “wholly unlawfully and without basis”.

A Delhi court had on February 14 sent Ravi to five day police custody after the agency said her custodial interrogation was required to probe an alleged “larger conspiracy” against the government of India and to ascertain her alleged role relating to the Khalistan movement.

The activist’s hurried transit in the absence of a transit remand and the remand order granting her five-day police custody highlights severe procedural violations in the state’s mandate of criminal administration of justice, Ritika Goyal and Shrutika Pandey had noted in their analysis of procedural violations for The Wire.

A toolkit is a document created to explain any issue. It also provides information on what one needs to do to address the issue. This might include information about petitions, details about protests and mass movements.  It is unclear why an easily accessible document could amount to ‘conspiracy’ in Delhi Police’s eyes.

In her plea, Ravi has contended that in the present circumstances, it was “highly likely” that the general public will perceive the news items “as being conclusive as to the guilt of the petitioner (Ravi)”.

“In these circumstances, and to restrain the respondents from further violating her privacy, her reputation, and her right to a fair trial, the petitioner is moving the present petition,” the plea said.

Her petition has alleged that investigative matters have been leaked to the media and the press briefings by the police are “prejudicial” and “grossly violative of her right to a fair trial and presumption of innocence”.

“The illegal actions and omissions on part of the respondents has irrevocably violated the petitioner’s fundamental right to privacy, her right to reputation, her dignity, and the consequent effect of the administration of justice and right to fair trial,” the petition has said.

It has claimed that the police first “leaked investigative material” like alleged WhatsApp chats, the substance and details of which were only in the possession of the investigating agency.

Thereafter, the “private alleged WhatsApp chats” were publicised and disseminated by various media houses which was a violation of the provisions of the Cable Televisions Networks (Regulation) Act, 1995 (CTN Act), the Programme Code and the Uplinking and Downlinking Guidelines, the petition has contended.

It has also claimed that the “media houses have published one-sided defamatory, suggestive innuendos, and half truths about the petitioner”.