As Tales of Migration Misery Continue, Biharis Now Accept That as Their Destiny

Due to a lack of job opportunities and dearth of land to cultivate, the rate of migration has increased exponentially and the economic conditions of locals have worsened. 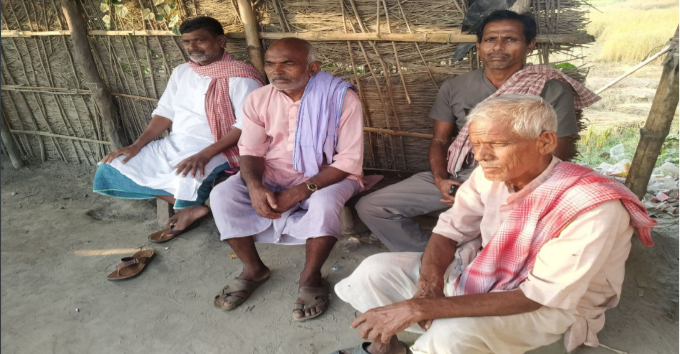 Madhubani (Bihar): While the mercury has dipped, announcing the onset of winter, political temperatures are still on the rise in Bihar, with the first phase of voting being over in the state assembly elections, the second underway and the third yet to come.

It is afternoon yet as we pass through the East-West Corridor, on National Highway-57, which connects eastern India with the western parts, the region seems abuzz with electoral activity.

However, when we drive off the highway and take the road leading to Madhubani’s Bassipatti Panchayat area, the noise gradually subsides taken over by silence.

Few people appear on the road, most of whom are old. Some children can be seen playing while women are busy in domestic chores.

Thirty kilometres from the district headquarters, Madhubani’s Bassipatti Panchayat is surrounded by the Kosi on one side and the Balan river on the other.

The area falls under the Phulparas assembly constituency and the Jhanjharpur parliamentary constituency. The village is voting on November 3, the second phase of polls in the state.

The village mostly has kuccha houses with tin roofs. It is said that when the floods in Kosi displace the people in nearby villages, they carry their houses with them.

While migration is a subject of debate for the rest of the world, the local residents have accepted it as their destiny. The issue is hardly ever brought up in the poll rhetoric. Such is the situation of a gram panchayat which has been the worst affected by floods and migration.

“I migrated to Delhi for work at a very young age,” says 60-year-old Satto Mandal. “My children used to cultivate the land here while I worked to feed them. Since the Kosi has eroded the field, I am forced to plant crops on someone else’s land.”

Both his sons work in Haryana and support the family.

Nearly everyone in the village has a similar tale of misery. Seventy-year-old Ramvallabh Mandal has five sons, two of whom work in a grain market of Haryana while another is a construction labourer in Delhi. The remaining two are unemployed and stay with Mandal.

“If they are able to find land on lease, they cultivate it,” says Mandal about his sons. “But the produce is not sufficient even for the family. Right now, half bigha land is being cultivated.”

Ramvallabh blames his present situation on the erosion in Kosi that happened in 1999. “That year, the Kosi cut our land of five or six bighas. Later, in order to settle down again we had to purchase this land (near the security dam).” 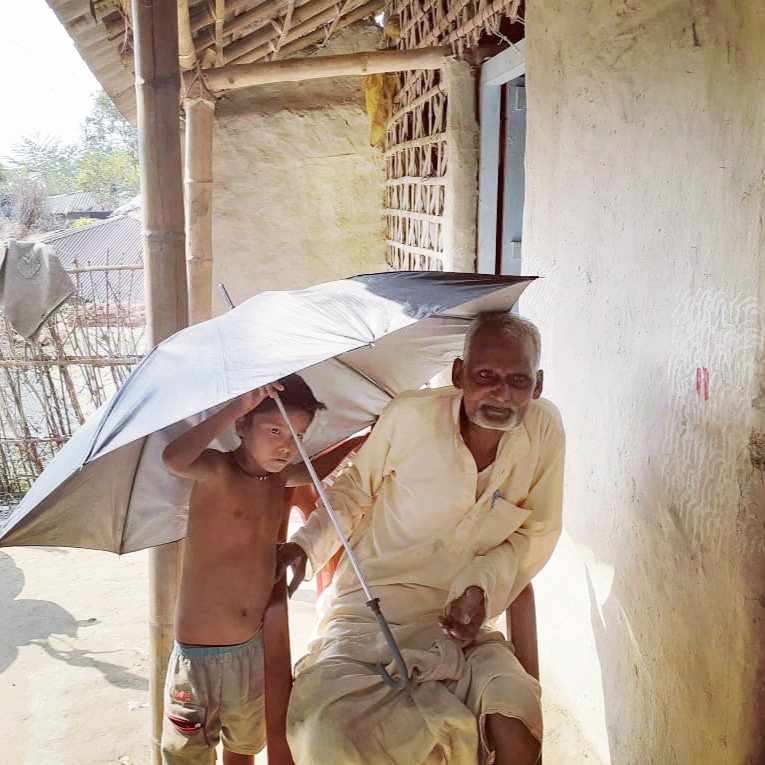 According to Satto Mandal, ​​Bassipatti village was spread over 2,200 bighas till two decades ago. But now it has been reduced to only 25-30 bighas.

As a result, the family members of big landowners are also forced to work as labourers in other states or are unemployed.

People used to migrate from the village to other states earlier too. But, due to lack of employment opportunities and dearth of land to cultivate, the rate of migration has increased exponentially and the economic condition of the locals has worsened.

During the coronavirus-induced lockdown, labourers from the village somehow managed to return from other states. But since their return, they have been unable to find any work.

After nearly six months of being unemployed, the labourers have started migrating to other states for work again.

Thirty-year-old Paswan had left Bihar in search of work at the age of 12. Currently, he is working as a labourer at a paddy field in Punjab.

“He could find no work here,” says Paswan’s wife, Chandralekha Devi. “There are eight members in the family, and he is the sole bread-winner. What else could he do, if not migrate? He had been sitting idly at home for five or six months. We also borrowed a lot of money from the moneylender. On Rs 100 we need to pay Rs 5 as interest every month.” 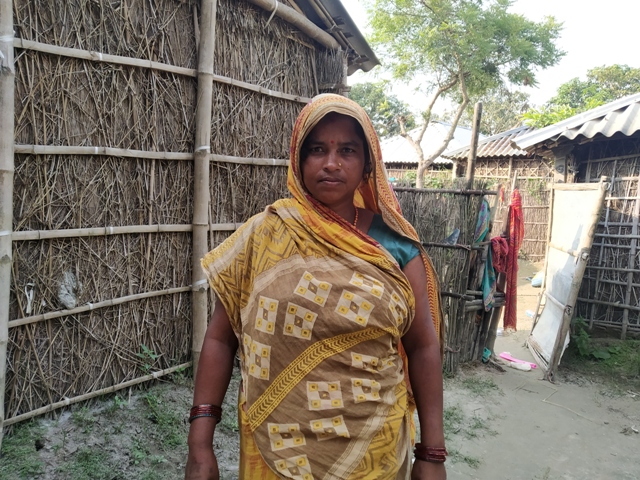 Jagdev Mandal, the deputy head of the panchayat, says, “Those who had returned from other states, have gone back to Delhi or Punjab after borrowing loans to pay the rent, and other expenses. The employers had sent buses which left packed with labourers. None of them is left in the village anymore.”

“There is an election in the state but neither a leader nor any official stopped them from leaving before casting their ballot or assured them that they would be provided work. All of them have escaped to the cities to avoid starvation,” says Satto Mandal.

Are issues of migration and unemployment not being brought up in the on-going election? In response, the local villagers unanimously claim that since all work had stalled due to the lockdown, what could the government do.

“Nitish ji had given 5 kg food grains to each individual for free,” says Jagdev Mandal. “If he hadn’t, people would’ve starved. How can we forget what Nitish ji did for us? We have no complaints.”

But has the government provided them employment opportunities in their area? They have no answer.

“If people are able to migrate and find work elsewhere, it is because of the government,” Ramvallabh Mandal intervenes. “If someone works in a private company, the government is to thank as it provides the contract. That’s why we believe that there is no dearth of work for us.”

“Narendra Modi and Nitish Kumar have never stopped any of us from working. We are free to work anywhere. And so we will manage by doing labour,” says Satto Mandal.

Although the residents of Bassipatti seem to agree that there is corruption in the government plans and projects, they blame the local administration for it.

“Modi ji grants funds to the panchayat, but it does not reach us. Money comes from the Centre, but if the local authorities do not dispense it, what is the prime minister’s fault?”

However, when asked about the poll promise of 10 lakh and 19 lakh jobs as mentioned in the manifestos of the RJD and the BJP respectively, they call it a sham.

Another local resident, Navkant Singh, is a medical representative (MR) in a pharmaceutical company. He claims that only a handful people have got a government job here. The educated youth of the region are also forced to work in other states.

Commenting on migration and unemployment, the state general secretary of the JD(U)’s most backward class (MBC) cell, Laleshwar Prasad Singh, says, “The government has been making efforts to stop the migration of people through MGNREGA, but owing to natural calamities, there are few MGNREGA employment opportunities. As most of the workers are agricultural labourers, they are compelled to migrate.”

According to the government figures regarding MGNREGA, labourers in Bassipatti were provided work for only 24 days in the current financial year 2020-21, despite emphasis being laid on this scheme during the lockdown. This figure was 35 in the year 2019-20.

Meanwhile, the block administration says that only 3,000 migrant labourers had returned during the lockdown.

But according to a report published in a local daily, the number of returning labourers was much more. However, MGNREGA jobs cards were issued to only about 1,000.

In this regard, Jaidev Mandal says, “There is no work under MGNREGA in the village. If we do not migrate, we will all die of hunger.”

Locals reveal that the condition of adjacent villages is the same. But Bassipatti’s situation is even worse as no political bigwig hails from the village.

Ram Vallabh says that despite elections being underway in the state no party candidates, MLA or MP, have visited the village to ask for votes. As we speak, a campaign vehicle for a candidate speeds away on the road.

Watching it pass by, Ram Vallabh pauses for a moment and says, “Did you see it stop for us? They all go straight to the big people (the head of the village and the likes). Then their minions come and tell us who to vote for.”

“In the village, there is a fear that in case we do not vote for a particular candidate, we might face repercussions,” adds Satto. “People may vote for the candidate of their choice despite outwardly supporting another. Tell me, how can we forget those who have worked for us? We will vote for them, even if we have to fight for it.”

Hemant Kumar Pandey is an independent journalist. This article is translated by Naushin Rehman from the Hindi original.