Various opposition parties have used the rising number of cases to question the Modi government's handling of the pandemic. 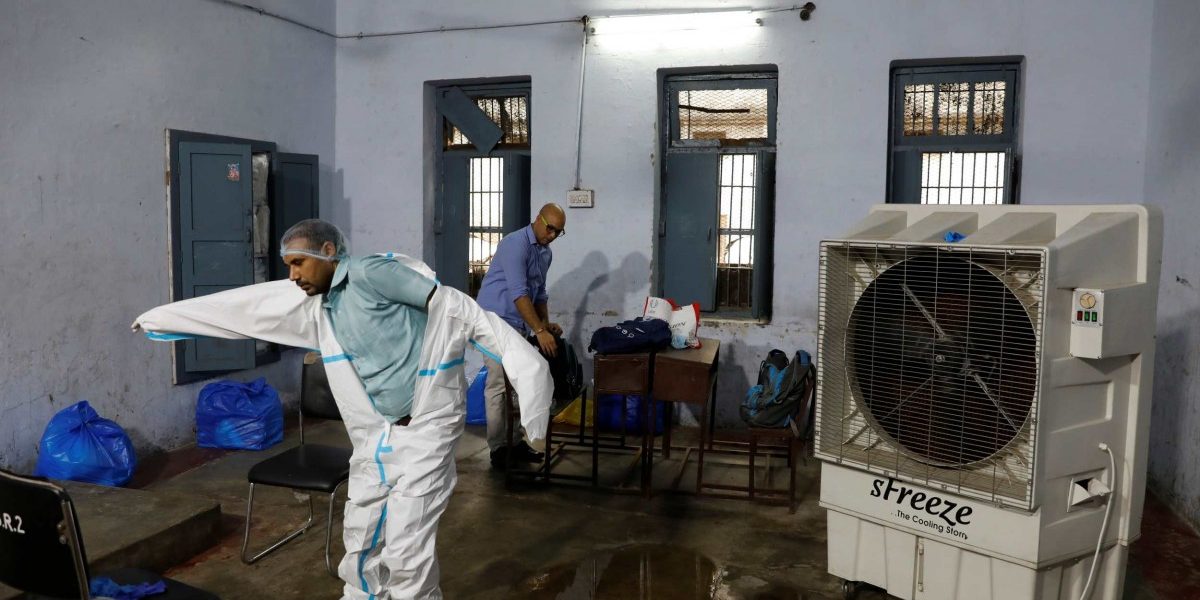 A health worker in personal protective equipment (PPE) collects a sample using a swab from a person. Photo: Reuters/Adnan Abidi

The total number of cases had reached one million on July 17, which means the current doubling time for the case load is around three weeks. On July 27 – three weeks after the national lockdown ended in containment zones and seven after restrictions had eased in non-containment zones – India’s rate of growth of the number of cases was found to be the highest in the world. Among countries with over 300,000 cases, India’s doubling time around then was only higher than that of South Africa (21 days vs 19 days), although by then India also had over a million cases more.

It’s not clear when India’s COVID-19 epidemic is expected to peak. Various models have predicted different trajectories, and also different interventions as a result. One preprint paper claiming to be “conceived as part of the National COVID-19: Taskforce Operations Research Group”, uploaded online on July 12, claimed the epidemic would peak around November this year. However, the Indian Council of Medical Research (ICMR), whose financial support the study acknowledged, distanced itself from the results.

At present, a few seroprevalence surveys have indicated that India’s case load could be much higher. However, the results are also beset by numerous uncertainties and most of the survey reports haven’t yet been placed in the public domain for independent scrutiny. In addition, an investigation by The Wire Science found evidence of rampant fatality undercounting around the country. Doctors have also remarked that the fatality rate reported by the government doesn’t match the global average.

All together, there is widespread suspicion among experts that India’s official records could be underreporting deaths due to COVID-19 by a factor of about 1.5. Similarly, public health experts and epidemiologists have also speculated that cracks in public healthcare and testing and quarantining strategies are unlikely to have captured everyone who ever had the virus. That is, that India’s actual case load could be an order of magnitude higher. Dr T. Jacob John had told The Wire in May that India may have around 400 million cases by the time the epidemic is called off.

On August 5, The Hindu quoted the health ministry as saying that the country had reported the highest number of recoveries in 24 hours that day – 51,706. On the morning of August 7, there had been 62,538 new cases and 49,769 recoveries in the preceding 24 hours. The government continues to deny community transmission is underway. However, experts – including former ICMR chief scientist Raman R. Gangakhedkar – admit it may be happening in some pockets, including in Mumbai and Delhi.

The national epidemic is expected to peak when the number of new cases begins to drop consistently (adjusted for the testing rate) while the number of recoveries continues to rise. In the meantime, scientists and drug-makers have been trying to find a drug that cuts mortality among patients at greater risk of death due to COVID-19 and a vaccine that could protect uninfected people from developing an infection in the first place.

However, many of these efforts have also stoked suspicion of procedural irregularities. Two examples are ICMR’s demand for accelerated clinical trials for Bharat Biotech’s COVAXIN vaccine and the Drug Controller General of India’s decision to waive phase III trials for Biocon’s Itolizumab drug.

The breach of the two-million mark opened a window for some opposition parties to take a dig at the Union government, which has been claiming that its timely decisions helped control the COVID-19 situation in India.

Last week, Prime Minister Narendra Modi had yet again said that his decisions saved India from witnessing the worst of the pandemic, and that the country’s position is much better than many developed countries. However, experts have proven that the claim is barely backed by scientific evidence.

Over the last few weeks, the Union government’s focus has been more on politically polarising issues like the Ram Janmabhoomi bhoomi pujan ceremony than anything else, even as uncertainty over when normalcy will be restored looms over the minds of Indian people.

Against this backdrop, Congress leader Rahul Gandhi shared an old tweet from his timeline within hours of India having crossed 20 lakh coronavirus cases.

“The 10,00,000-mark has been crossed. If COVID-19 continues to spread at this pace, we will soon cross the 20,00,000-lakh mark by August 10. The government should take prudent steps to tackle the pandemic,” his July 17 tweet read. In an “I told you so” moment, Gandhi’s post was meant as a reminder that he was right – a veiled attack on the Narendra Modi-led Union government.

Gandhi has been consistent in targeting the prime minister over daily spikes in COVID-19 cases, and alleging that the government was looking to score political brownie points over other issues instead of taking concrete steps to contain the pandemic and restart the engines of the national economy.

Speaking to The Wire, Manoj Kumar Jha, Rajya Sabha MP and Rashtriya Janata Dal leader, said that the way the Union government has been silent on the pandemic is worrisome. “It (coronavirus) doesn’t matter to us anymore. The government is talking of everything except how to tackle the growing number of cases. The silence is conspicuous. It is a sad story. Our doubling rate is one of the highest in the world, yet we find that the government has no clarity on the issue.”

He pointed out the deteriorating situation in Bihar. “One of the worst instances is Bihar. The state doesn’t yet have the capacity to tackle the pandemic. Both chief minister Nitish Kumar and the prime minister are commenting on all other issues except this. People have been implicitly told that you are on your own if you get infected by the virus,” he said.