On narrow nationalism, why minorities, especially Muslims, must be made to feel safe in India, and the need to replace the short 'jhadoo' with a long-handled broom. 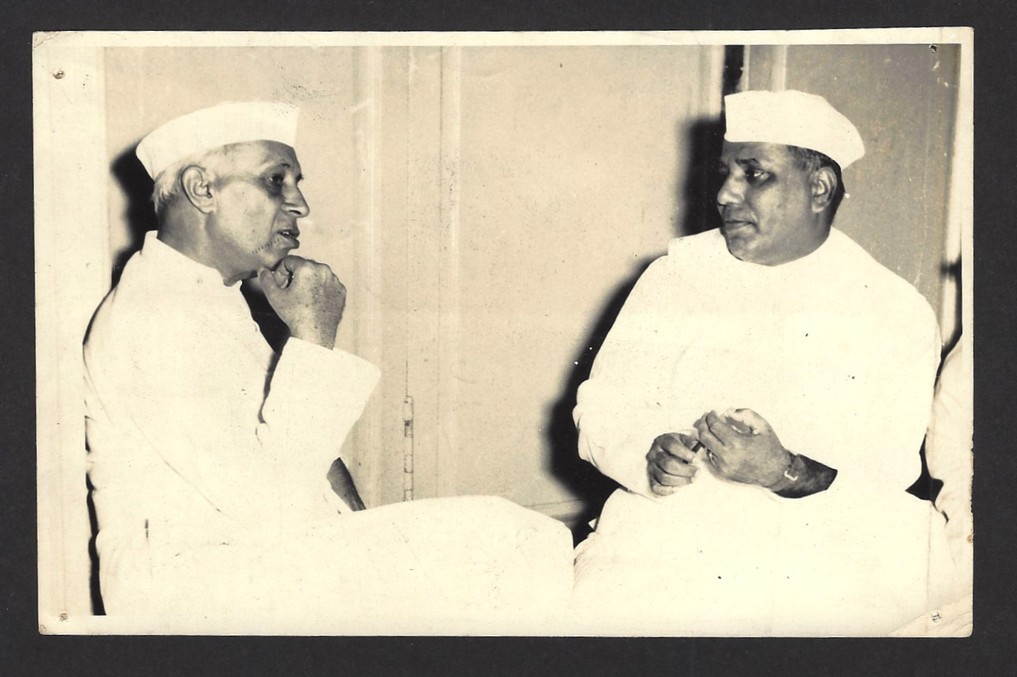 Note: This article was first published on May 27, 2017 and is being republished on November 14, 2018, Jawaharlal Nehru’s birth anniversary.

Different prime ministers choose to communicate in different ways. If tweets, radio broadcasts and speeches at rallies are Narendra Modi’s preferred modes of communication, India’s first prime minister, Jawaharlal Nehru, believed in letters – snail-mail, in today’s parlance. Soon after he assumed office in August 1947, Nehru began a tradition of writing a letter every fortnight to the chief ministers of all states, letters in which he spoke freely of the problems the country was confronting at the time.

These letters are available in Nehru’s Collected Works and Selected Works and provide an interesting glimpse into the workings of a mind that grappled simultaneously with questions ranging from nation building, communalism, the economy, social justice, science and foreign policy.

On the occasion of Nehru’s 52nd death anniversary we are publishing extracts from three such letters because of their contemporary resonance. Two deal with nationalism, communalism and the rights of minorities, while the third shows him engaging with problems faced by India’s sanitation workers – whose rights to a safe and dignified working environment  remain neglected by policymakers to this day, despite all the talk of ‘Swachch Bharat’.

On brooms and ploughs

I am writing to you about a subject which, perhaps, will seem to you very trivial and even unimportant. Here we are dealing with great issues, planning mighty projects and all that. But still what I am writing to you seems to me to have a basic importance.

I am writing to you about brooms, the humble broom used by our cleaners and sweepers as well as in our houses. The normal Indian broom can only be used if one bends down to it or even sits when using it. For most household purposes this might not matter much, although even there it is troublesome. A broom or a brush with a long handle, which can be used while a person is standing, is far more effective from the point of work and far less tiring to the person using it. So far as I know, all over the world these standing brooms or brushes are used. Why then do we carry on with a primitive, out of date, method which is inefficient and psychologically all wrong? Bending down in this way to sweep is physically more tiring and, I suppose, encourages a certain subservience in mind. 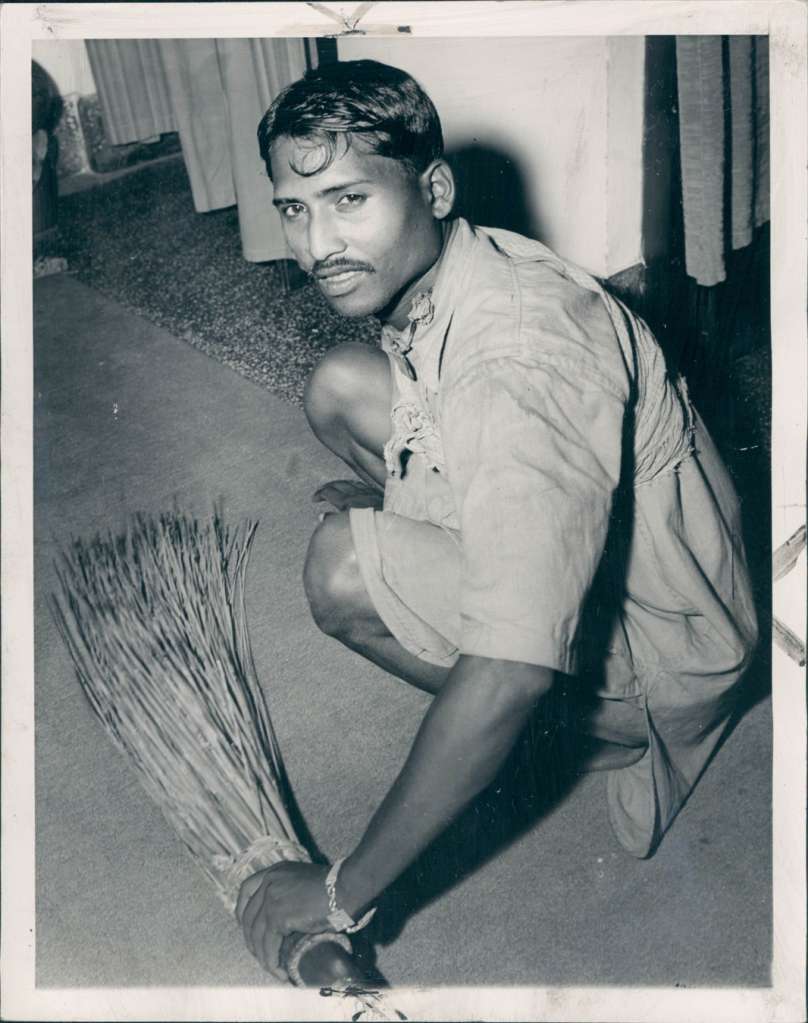 An Associated Press photograph from June 1946, released with the caption, “One of India’s ‘untouchables’ holds the broom he uses in sweeping out streets, yards and houses”.

But the main consideration is not the individual householder but the large-scale cleaning operations done on behalf of Coprorations and Municipalities. These can undoubtedly be made much more efficient by the use of the long-handled broom or brush.   I think that every Corporation and Municipality must be induced to bring this small, but far-reaching, reform. They can easily supply their long-handled brooms and brushes to their sweepers and cleaners. In addition, every such sweeper or cleaner should be given a proper container with a lid to collect refuse, etc….

I, therefore, urge you earnestly to take up this matter with your Municipalities and Corporations and insist on long-handled brooms and proper containers being given to their staff of cleaners, etc. It is quite possible that, to begin with, the sweepers might themselves object to this change. But this should not come in the way.

I think also that all Municipal sweepers and cleaners must have a proper uniform….

To turn to a completely different subject, I have frequently reminded you of the importance of our agriculturists using new ploughs. I am not referring to any complicated, expensive equipment, but just a modern plough costing probably from fifty to sixty rupees. It surprises me that we go on talking big about agricultural improvements and do not tackle immediately this basic implement, the plough, which everyone can change without any big effort. Such a change would immediately lead to better production and the poorest agriculturist would get back the price of the plough, and much more even, in one season….

On the dangers of narrow nationalism

I want to share with you a certain apprehension that is growing within me. I feel that in many ways the position relating to minority groups in India is deteriorating. Our Constitution is good and we do not make any distinction in our rules and regulations or laws. But, in effect, changes creep in because of administrative practices or officers. Often these changes are not deliberate, sometimes, they are so.

In the Services, generally speaking, the representation of the minority communities is lessening. In some cases, it is very poor indeed. It is true that some of the highest offices in the land are occupied by members of these minority communities. They occupy high places also in our foreign missions. But in looking through central government figures, as well as some others, I am distressed to find that the position is very disadvantageous to them, chiefly to the Muslims and sometimes others also.

In our Defence Services, there are hardly any Muslims left. In the vast Central Secretariat of Delhi, there are very few Muslims. Probably the position is somewhat better in the provinces, but not much more so. What concerns me most is that there is no effort being made to improve this situation, which is likely to grow worse unless checked.

It is all very well for us to say that we shall not pay any attention to communal and like considerations in appointments. I am no lover of communalism and its works. Indeed, I think it is the most dangerous tendency in India and has to be combated on all fronts. But, at the same time, we have to realise that in a vast and mixed country like India we must produce a sense of balance and of assurance of a square deal and future prospects in all parts of the country and in all communities of India. If the tendency is to upset any balance or to emphasise one aspect at the cost of another, the result is a lack of equilibrium and dissatisfaction and frustration among large groups.

This is exactly what is happening and it is not a good thing….

The feeling of nationalism is an enlarging and widening experience for the individual or the nation. More especially, when a country is under foreign domination, nationalism is a strengthening and unifying force. But, a stage arrives when it might well have a narrowing influence. Sometimes, as in Europe, it becomes aggressive and chauvinistic and wants to impose itself on other countries and other people. Every people suffer from the strange delusion that they are the elect and better than all others. When they become strong and powerful, they try to impose themselves and their ways on others. In their attempt to do so, sometime or other, they overreach themselves, stumble and fall. That has been the fate of the intense nationalism of Germany and Japan.

But a more insidious form of nationalism is the narrowness of mind that it develops within a country, when a majority thinks itself as the entire nation and in its attempt to absorb the minority actually separates them even more. We, in India, have to be particularly careful of this because of our tradition of caste and separatism. We have a tendency to fall into separate groups and to forget the larger unity.

Communal organisations are the clearest examples of extreme narrowness of outlook, strutting about in the guise of nationalism. In the name of unity, they separate and destroy. In social terms they represent reaction of the worst type. We may condemn these communal organisations, but there are many others who are not free from this narrow influence. Oddly enough, the very largeness of India, which is a world in itself, tends to make the people living in it complacent, rather ignorant of the rest of the world, and narrow-minded. We have to contend against these forces….

On Minorities and ‘Loyalty’

If India is to progress, we must absorb, and make our own the various minorities in India, and notably the Muslims. The view of the Hindu Mahasabha and other communal organisations is opposed to this. I am certain that the Hindu Mahasabha policy is fatal for India. Their talk of putting an end to Partition is foolish in the extreme. We cannot do so, and we should not try to do so. If by any chance Partition was ended, while present passions last on either side, it would mean tremendous new problems for us to face. We would be worse off than ever. Therefore, there must be no thought of putting an end to Partition and having what is called Akhand Bharat.

There is a tendency among some of us to demand loyalty from the Muslims in India and to condemn tendencies amongst them which may be pro-Pakistani. Such tendencies, of course, are wrong and have to be condemned. But I think it is wrong to lay stress always on the loyalty on behalf of the Muslims of India. Loyalty is not produced to order or by fear. It comes as a natural growth from circumstances which make loyalty not only a sentiment which appeals to one but also profitable in the long run. We have to produce conditions which lead to this sentiment being produced. In an event, criticism and cavilling at minorities does not help.

It is difficult to think of long-term policies when the situation is an ever-changing one. The only real long-term policy we can have is to consolidate India by making all the minorities in the country feel completely at home in the State, and indeed by removing all sense of difference from the political point of view between the so-called majorities and minorities. That will, no doubt, take some time. But that is the only goal to aim at and every step taken must keep that in view.