While some people allege they have been excluded from the MGNREGA system altogether because their Aadhaar cards weren't linked, others say wages are going into wrong accounts because of incorrect seeding.

Workers at an MGNREGA work site at the outskirts of Patna village. Photo: Jahnavi Sen 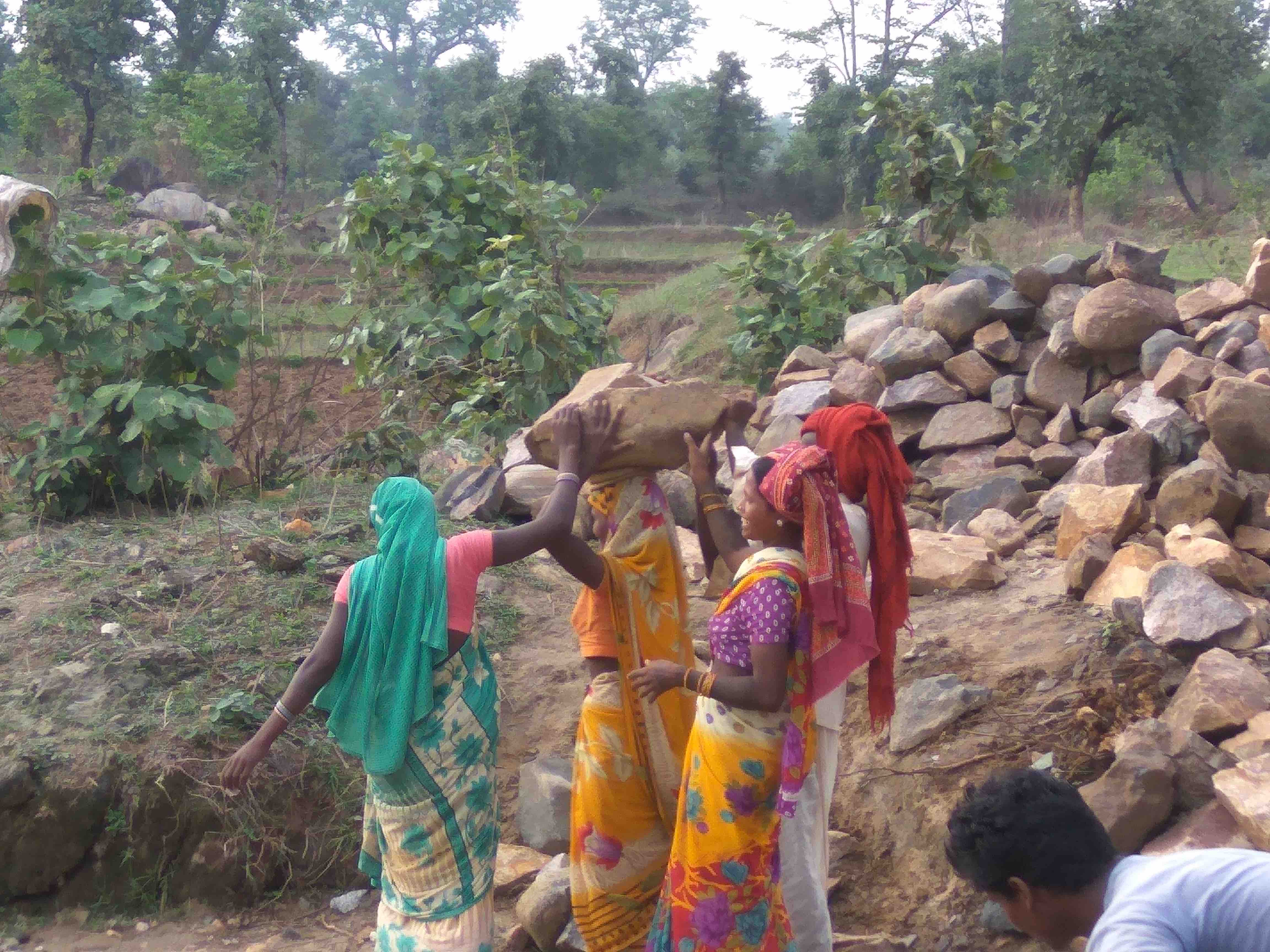 Women at an MGNREGA work site at the outskirts of Patna village. Credit: Jahnavi Sen

This is the second article in a two-part series on the impact of Aadhaar on welfare schemes in Jharkhand. You can read the first part, focusing on the PDS and pensions, here.

Manika (Latehar district, Jharkhand): On July 18 and 19, the Supreme Court heard petitions questioning the government’s decision to link Aadhaar with welfare schemes – almost two years after the court said a constitution bench would be set up to look into the matter. In the intervening period, Aadhaar has slowly become a must have – particularly if you’re living in a rural area and want to continue being a part of the government’s welfare schemes.

Jharkhand was the first state to experiment with linking Aadhaar to payments under the Mahatma Gandhi National Rural Employment Guarantee Act (MGNREGA), as far back as in 2011. Over the years, this experiment turned into a state-wide rule. But despite the fact that six years have passed since this linkage was first rolled out, implementation remains a problem – in more ways than imagined. In Latehar district’s Manika block, the new system has raised a host of issues.

In the employment guarantee scheme, linking job cards with Aadhaar cards has been part of a larger process of digitisation and transparency, by publishing records online. This has made things easier for activists and those with internet literacy, who can now access more information (that earlier required RTI applications) freely.

But for people in Manika, the new system (around a year old in the area) is definitely not working as planned. A whole range of “teething problems” have cropped up – problems that may be fixable, but that are making the lives of labourers a lot more difficult.

According to activist James Herenj, who has been working on local welfare issues for years and is also the head of Jharkhand NREGA Watch, a lot of this happened because of the way in which digitisation was hurried through, without proper training for the local authorities.

“When new panchayats were elected in 2014 in Jharkhand – after 32 long years – the first task they had was the signing of MGNREGA cheques. But an order came from the state government that all such signatures must be digital, so they can be kept track of easily. But most panchayat mukhias around here don’t even know how to use a computer, let alone operate a digital signature. So they hired ‘operators’ – these weren’t elected officials, but they suddenly had access to a lot of power. And everything they did would be using the digital signature of the mukhia or other panchayat members, so they would be the ones held accountable. We have seen cases where these operators were putting money into random labourers’ accounts by saying they had worked when they hadn’t. They would then ask the worker to return this money to them, either by giving the worker a small commission from it or by saying it was a mistake and the labourer was legally bound to return it. The money would then be with them, with a share sometimes also going to the MGNREGA contractor,” Herenj told The Wire. “And technically, all this would happen in the mukhia’s name – the operator’s name would be nowhere in the records.

Another glitch that occurred was in the process of linking Aadhaar cards with job cards. Local gram rozgar sevaks (GRSs), who work under the panchayat, were told to by the collector’s office to bring the Aadhaar numbers of all the MGNREGA workers in their area within a short amount of time. “What happened was that they really wanted to show 100% Aadhaar seeding,” Herenj said. “So when a certain worker couldn’t be located because he or she was out of town or at work, and the GRS couldn’t find their Aadhaar number, his or her job card was suddenly cancelled. So the collector could claim 100% seeding – the non-seeded job cards suddenly no longer existed.”

Twenty-six-year-old Bhola Singh from Patna village alleges that he is one of the victims of this exclusion. He has an Aadhaar card, but was away working in a nearby town when the seeding took place. When he came back and put in a demand for work, he was told his job card had been cancelled. “I’m not sure why this happened,” he told The Wire. “I have worked in MGNREGA schemes several times before, but since October 2016 all my demands for work have been rejected. I asked the local GRS about this and he said he will try and help me, but nothing has happened yet.”

An official at the Latehar collector’s office, speaking on the condition of anonymity, denied the allegation of deliberate exclusion. “It’s true that some cards may not have been linked for whatever reason, but that doesn’t mean we went around cancelling job cards. If that has happened anywhere, people should contact us and we will look into it, it was certainly not authorised,” the official told The Wire. “And in cases where the link hasn’t happened, we are still working on it – it will happen.”

Despite repeated attempts, The Wire was unable to speak to the collector directly.

‘I don’t know where my money went’ 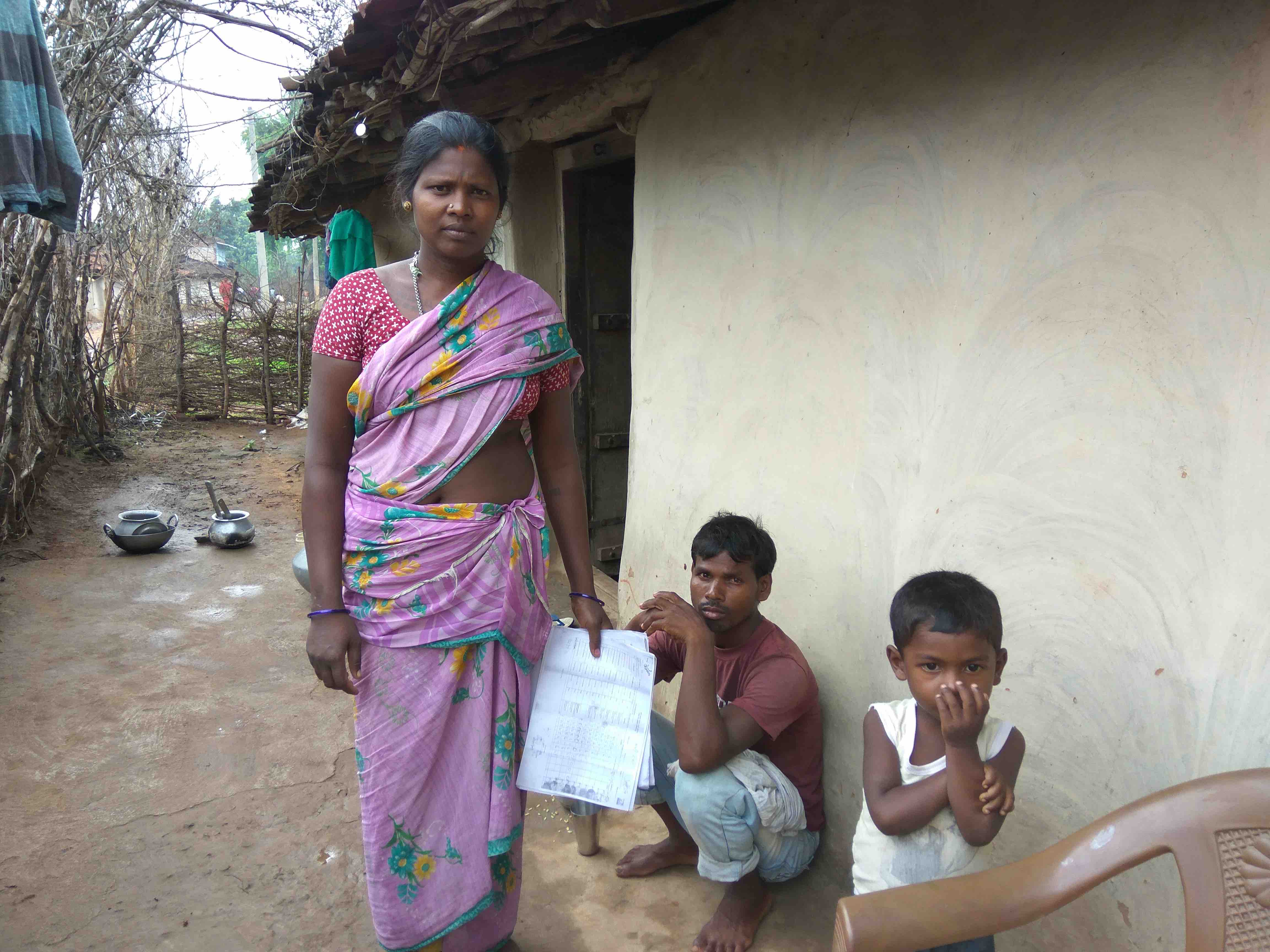 Umesh Oraon, Manju Devi and their son outside their house. Manju Devi is holding papers that highlight how Umesh’s wages are going to a different account. Credit: Jahnavi Sen

Even for those who do have Aadhaar cards and were around to get them linked to their job cards, there are some strange new troubles. In the hurry to link cards, a few numbers were mixed up, meaning that a linked job card and Aadhaar card don’t necessarily belong to the same person. And since payments are being made to Aadhaar-linked bank accounts, this also means that a person being paid isn’t always a person who did the work.

Umesh Uraon, 30, from Patna village, thought the payment for the work he did in December 2016 was never approved. He went to the local GRS multiple times, but got evasive answers, saying he was looking into it. Only recently, when he managed to get a copy of the records himself through some local activists, did he realise that his job card was linked to someone else’s Aadhaar and bank account numbers. “I have no idea where my money is now,” Umesh told The Wire. “This other man has the same name as me and lives in Mandhaniya village. But how can I just go looking for him and demand that he return my money? The authorities need to intervene to fix this, but they seem completely disinterested. The GRS has even stopped returning my calls.”

His wife, Manju Devi, has also not been paid for work she did in January. She’s not sure what the problem is – but she’s worried it may be another case of faulty bank account linkage. “We’ve stopped putting in demands for work,” she told The Wire. “What’s the point, if it’s not going to help us feed our children?”

This isn’t the only case where such a mismatch of accounts has happened. Sixty-two-year old Bhudni Devi, also in Patna village, is facing the same problem. One digit in her Aadhaar was put in wrong – so her payments were going to someone else’s account. She sent the GRS a request to change it two months ago, but nothing has been done so far, she says.

With the help of the local MGNREGA ‘mate’ (who works to ensure the scheme is properly implemented) she found out who her money was going to. He lives in the same village, so she went to ask him for her money. “But he told me he will only give it to me if I give him a commission – 50% of what I had earned! I don’t know what to do, the money is still with him,” she told The Wire. 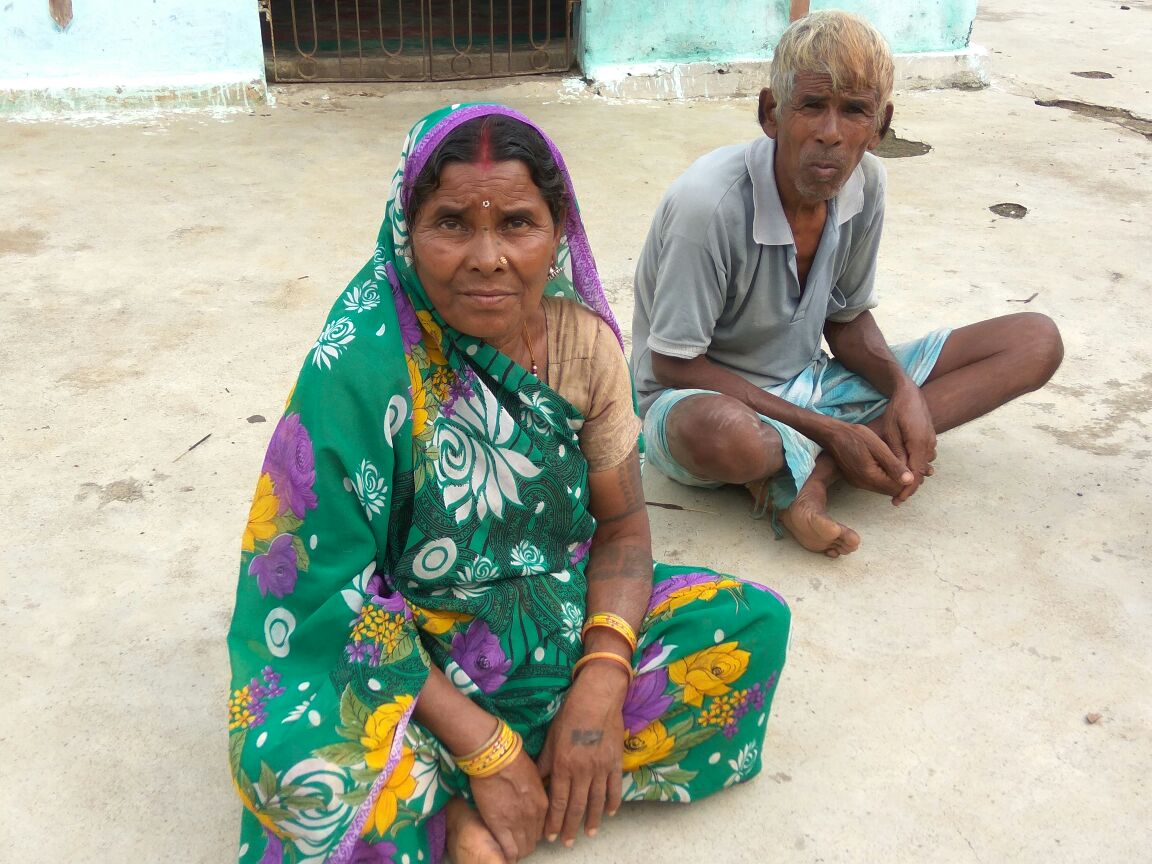 Shyama Singh is the mukhia of the Namudag panchayat in Manika block. Before she contested the local elections, she was an activist for close to 20 years, working with Herenj and others.

Bringing down corruption in the MGNREGA has been her pet project, both as an activist and as the mukhia. According to her, local collective action is much more useful than biometric systems like Aadhaar when it comes to fighting corrupt practices in the implementation of welfare schemes. “I’ve been mukhia for one and a half years now, and in that time we’ve tried to make some serious changes. For one, we are trying to make everything transparent – not only by putting it on the internet as is required but also by holding regular gram sabhas where we tell the villagers exactly how much was spent and what projects were approved,” Singh told The Wire. “We’ve also changed the process through which projects were allocated. It used be all about how much you could bribe the panchayat, now there’s a system that looks into what projects are needed, the different demands put in and so on.” 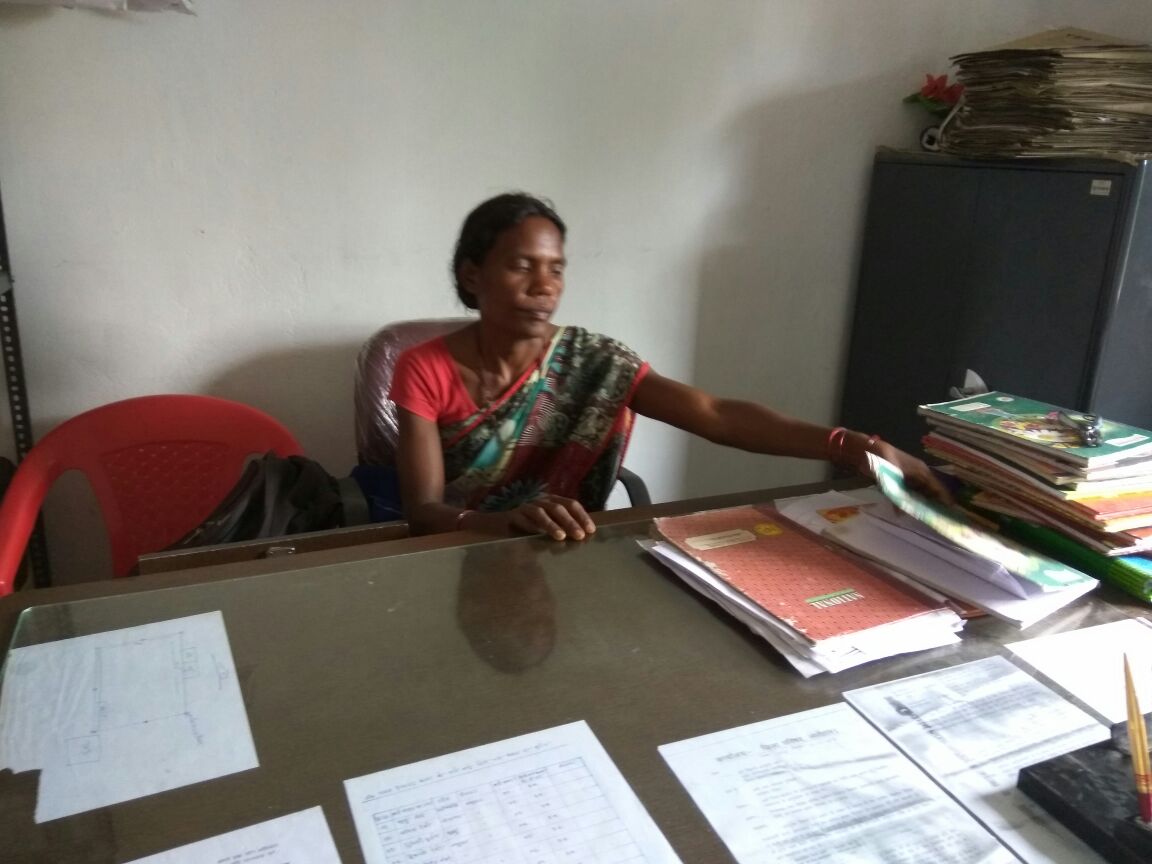 Singh has mixed feelings about the Aadhaar linkage. While in theory she thinks it could work, the implementation, she says, has been a complete mess. “This is not the kind of thing you can just push through – you have to train everyone, from people to the local authorities, on how it works, what the benefits are and so on. But that’s not what happened at all, everyone was just told ‘Here, now do this’. And everything happened so fast, there was pressure to do everything immediately. So now a lot of people have issues like incorrect linkage or complete exclusion,” she says. “Anyway, Aadhaar as a voluntary form of ID is okay – but now nobody even knows what it’s supposed to be. It’s taking over everything, but not in a good way.”

“The Aadhaar is definitely not the answer to all the problems of corruption,” she adds. “You need awareness and collective action – otherwise people who want to make money and take advantage of others will always find a way to do so.”