What Will Keep the Sea at Bay?

As sea levels rise due to climate change, planners across the world are debating the best ways to protect their coasts. 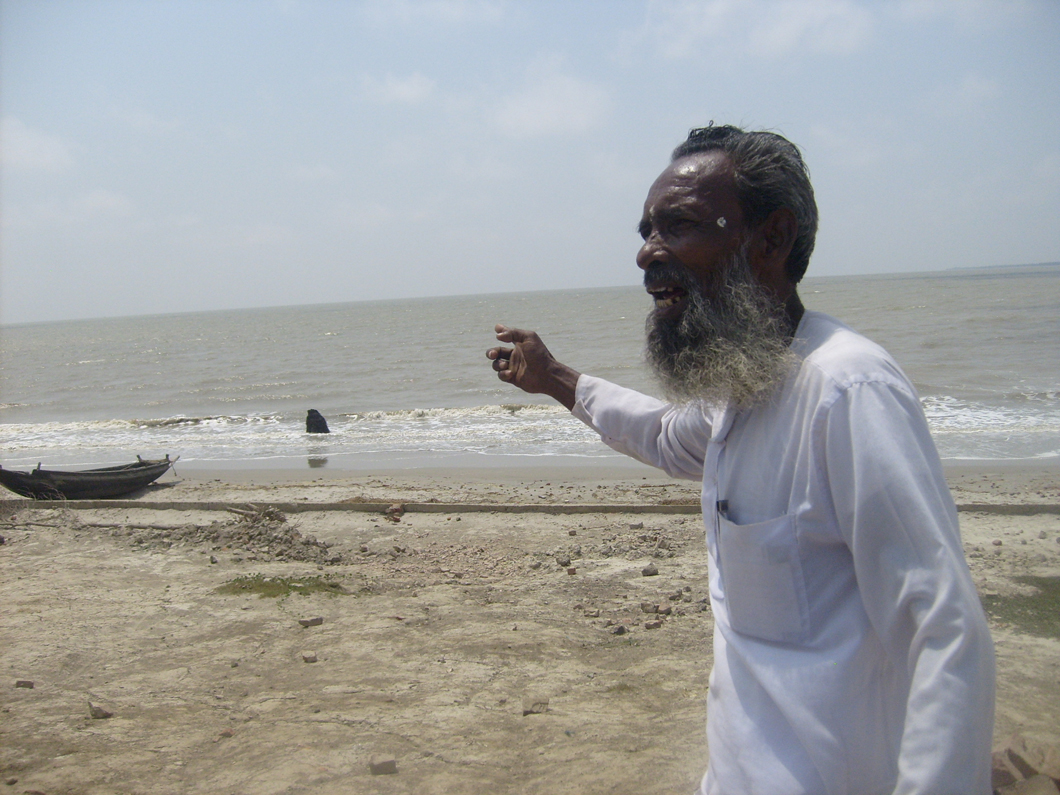 Badruddin Sarkar stands atop a five-metre-high embankment and points to the tree stump, where his home used to be before it was swallowed by the Bay of Bengal. Credit: Joydeep Gupta/Third Pole

Badruddin Sarkar has been busy planting mangroves along the coast of Bali Island, on the edge of the Sundarbans delta in West Bengal. “Tides are getting higher. This is the only way to save my farm, my home and my island,” the retired school teacher says.

The city fathers in Dordrecht, Netherlands, are wondering how to sensitise the residents about the impact of the rising sea. “Our studies show that our embankments may not be able to keep water out of many houses after 2050,” says an official of the municipal corporation. “We have given some information to the residents, but we don’t know how they will react when they will be briefed more,” he adds.

“We’re not depending only on our barrier to keep out the sea,” says an official in Europe’s busiest port, Rotterdam, as he points to the showpiece barrier that can be raised to let ships in. “We’re studying the tides and currents and pouring sand along the coast to ensure the water is diverted from Rotterdam.” However, this could wreak havoc in economically weaker cities like Dordrecht.

The rising sea affects people in two ways. One, it erodes the coast. Two, it leads to frequent and intense high tides and storm surges.

As sea levels rise due to climate change, planners across the world are debating the best ways to protect their coasts: with sea walls and embankments or with mangroves, sand and corals. With over 40% of humanity crowded along coastlines – particularly clumped up in coastal cities – and with sea levels already having risen between 2.6 mm and 2.9 mm per year since 1993 with a warming Earth, protecting the coasts has become crucial.

Options were debated at the May 10-13 at the ‘Adaptation Futures‘ conference in Rotterdam. Planners from rich nations have opted for sea walls and concrete embankments. New York has been strengthening its walls after the hurricane Sandy struck in 2012. Louisiana has been raising a protective wall after the city was flooded by the hurricane Katrina in 2005. And London has a floating wall, which is also the pride of the city, while Rotterdam has its boom. Planners from the developing nations are wondering if they should adopt a similar approach across the world. Should Mumbai, Karachi, Shanghai and Rio de Janeiro build similarly high walls? Can they afford it?

A section of experts suggest a different approach to deal with the situation: by controlling erosion and waves by planting mangroves or sea grass along the coast, and dumping sand to direct the currents away as the Dutch have been doing for ages.

There can be no single solution for all coasts. For example, neither mangroves nor corals grow outside tropical waters. If a high sea wall comes up, beach tourism suffers and so does the real estate sector. How high should such a wall even be? There is a wide range of forecasts on how the seas will rise due to climate change and when. It is difficult to take decisions in such scenarios, though most planners agree that something needs to be done urgently.

The consensus for now seems to be that a combination of efforts would be helpful: first using “softer” options like planting mangroves and protective coral reefs, and then building walls and embankments, especially around cities and valuable properties.

Far away from Rotterdam, Sarkar stands atop the five-metre-high brick embankment that protects his home and farm from the rising sea in Bali Island, facing the Bay of Bengal. “I used to teach geography,” he recalls. “We neither knew the sea could rise like this nor did we teach this to our students. This is a new world. Do you see that tree stump?” He points at something barely visible among the breakers. “That’s where my house used to be before the sea engulfed it. Now, we have been forced to move back.”

A series of waves crashed over the embankment during the next cyclone. Saline water ruined Sarkar’s paddy fields and freshwater pond. He and his family will move to Kolkata soon. They will be climate refugees, too.

This article was originally published in The Third Pole. Read the original article here.