Pradeep KS documents the destructive impact of the city’s broken drainage system on its water bodies that are choking with urban waste and pollution. 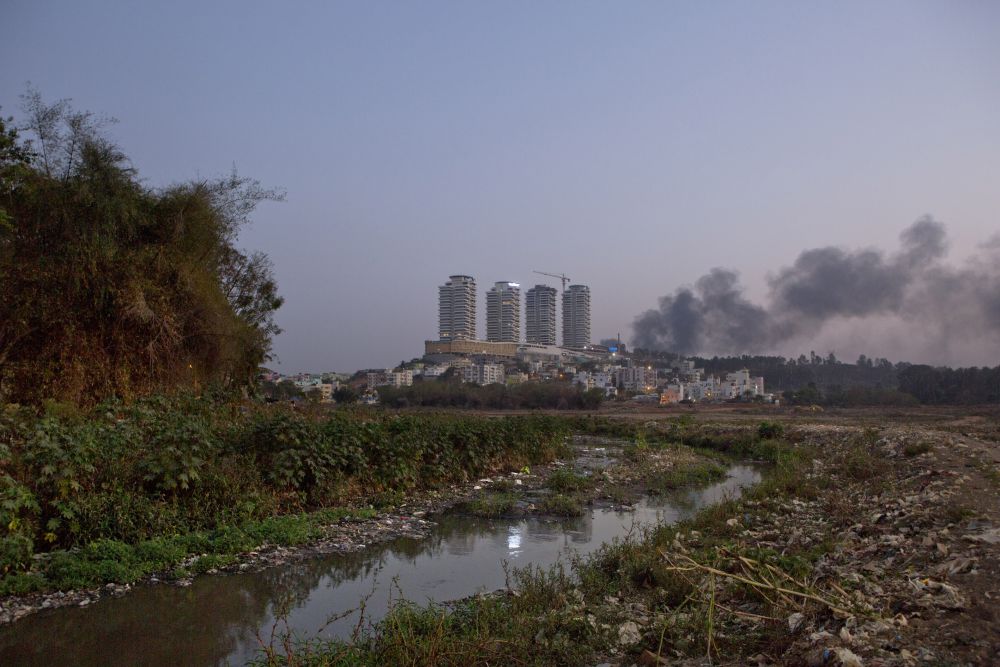 Flowing past the ring road towards Mysore road, the Vrishabhavathi meets Hosakerehalli lake at the base of the Yesu Gudda hill. The lake receives sewage from Jayanagar and surrounding areas (Chennammanakere Achukattu area, Padmanabhanagar, Chikkalasandra, Ittamadu) in the south of the city. It has also become a dump yard for garbage from residential areas. Credit: Pradeep KS

A river that comes and goes or a drain that carries away the city’s waste. A breeding ground of disease coated in foamy suds or an agrarian lifeline born in a city – the Vrishabhavathi and the Dakshina Pinakini take many forms.

Together they carry away the wastewater that leaves Bengaluru, where existing sewage and drainage systems have all but given up. The city, with a population of over ten million, consumes about 1,800 million litres of water each day. It spews out 1,440 million litres as waste, much of it into its streams and lakes.

The Vrishabhavathi originates at the Kadu Malleshwara temple, passes through a plant of the Bangalore Water Supply and Sewerage Board at Mailasandra, then proceeds through Kumbalgodu to the Byramangala reservoir, which irrigates orchards, vegetable gardens and fields of ragi. At Ganalu, it meets with Arkavathy. They flow on to Kanakapura, culminating in the Arkavathy reservoir, feeding Chunchi falls and driving a hydroelectric power station.

The Dakshina Pinakini, meanwhile, originates in the Nandi Hills. It flows through Chikkaballapur, Hoskote, Malur, Kadugodi and onto Sarjapura, outside the state capital. A remarkable endeavour to revive this lost river began in Sidlaghatta, 60 km from Bengaluru. If preserved and sustainably maintained, the Dakshina Pinakini could save the city and its citizens from future water scarcity.

Bengaluru’s lakes, too, are choking with urban waste and pollution, as untreated sewage flows directly into their catchment areas. The constant pressure of encroachment and unplanned construction has trumped conservation, resulting in stagnant and putrid urban water bodies.

Still, our water bodies remain a lifeline for villagers who live along their banks. The water might be too polluted to drink, but it is still essential for fishing and washing of cattle and clothes. The villagers know the water is toxic, but their lives remain intertwined with it.

This series of photographs is part of my ongoing project to document the destructive impact of our broken drainage system on these water bodies. Each image is testimony of our streams and lakes, which are slowly being choked by the very lives they used to sustain. 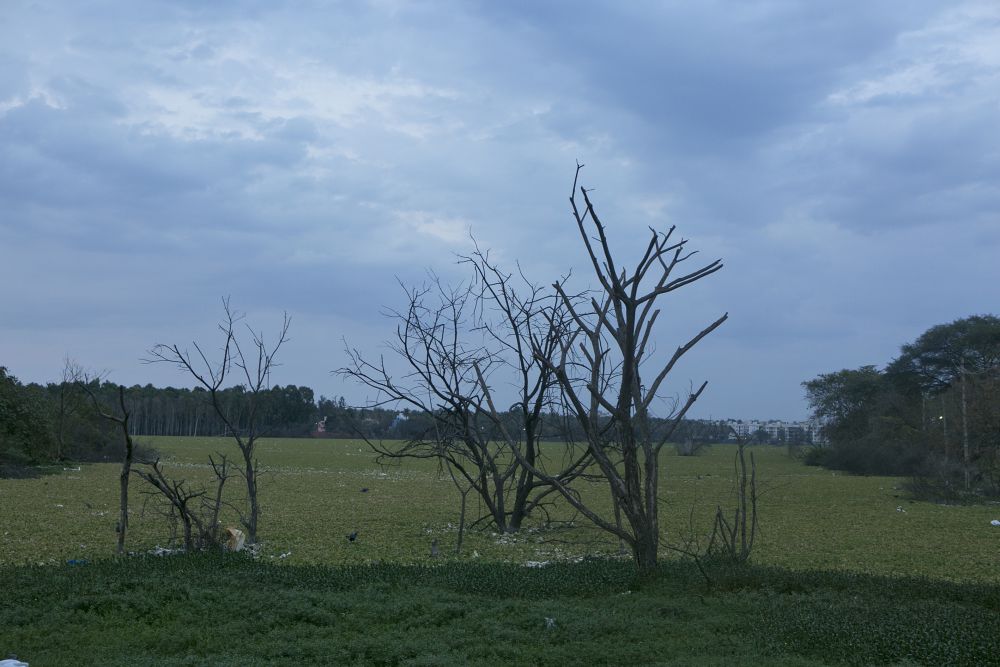 The Chikkabanavara lake is spread across 170 acres on the outskirts of north Bengaluru. Once a rural area, the village’s residents – now numbering over 75,000 – are now mainly urban. Domestic waste from here goes untreated into the lake, feeds the drainage system in Peenya and flows towards Kengeri off Mysore road where it joins the Vrishabhavathi valley. Credit: Pradeep KS 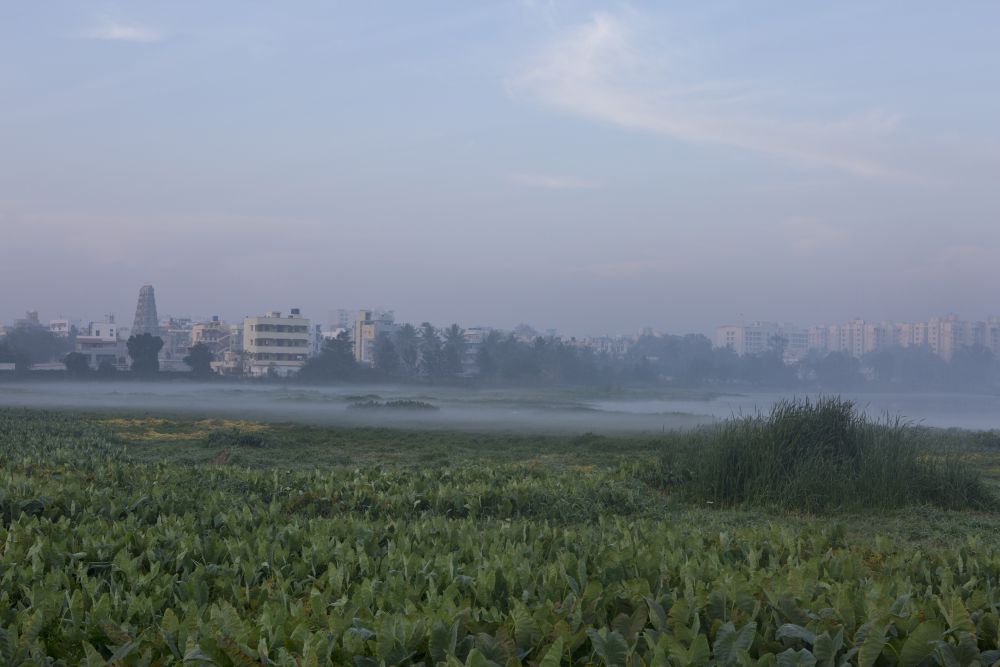 Bellandur Lake, the largest lake in the city, drains the south and southeastern parts of Bengaluru. Each day it receives about 500 million litres of sewage. The lake was in the news after fires broke out on its surface, releasing noxious fumes. Bellandur connects to Varthur lake, from where water flows on to Sarjapur, Hosur and Malur. Credit: Pradeep KS 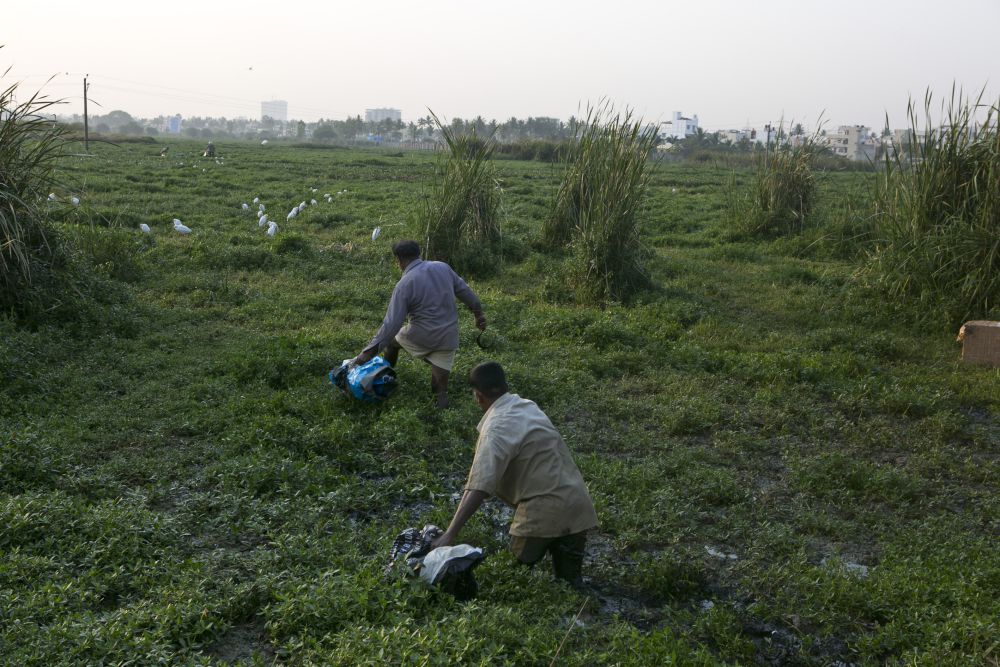 Joganna and Chanappa from Channasandra, a town located in east Bengaluru, wade into the Rampura lake each day to cut fodder for livestock. The lake is part of the Dakshina Pinakini river system, which originates in Nandi Hills and reaches Rampura lake via Hebbal and Nagavara. Joganna recalls when barely 15 years ago the lake served all their water needs, including providing drinking water. Credit: Pradeep KS 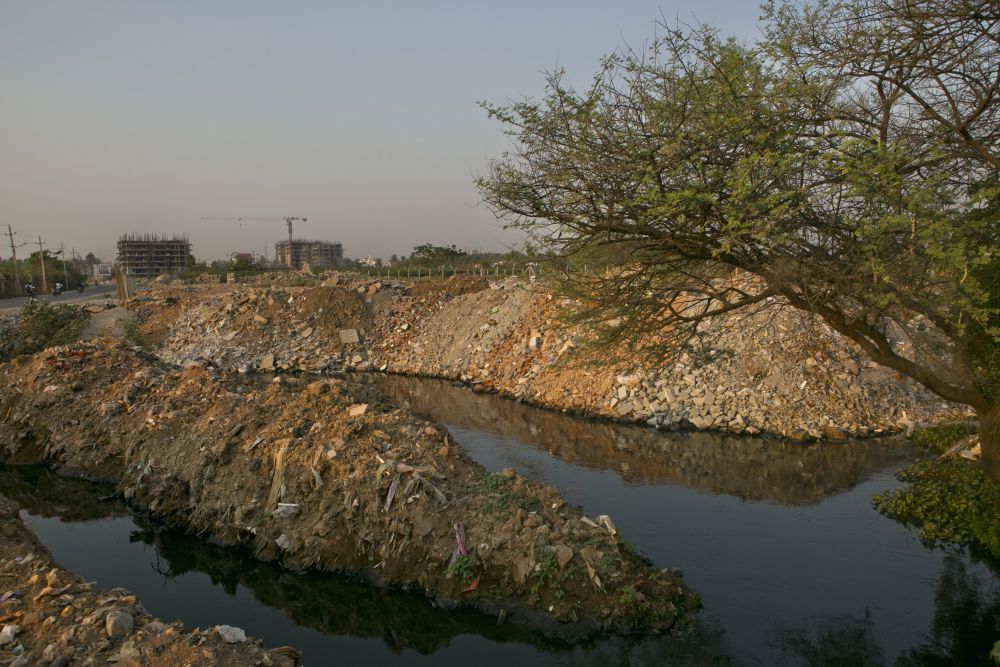 The Rampura valley receives a mix of treated and untreated water from the raja kaluve, or storm water drain, and a sewage treatment plant. Waste water from the northeastern parts of Bengaluru flow into this valley. Residents of Bilishivalaya and Channasandra have seen major changes here due to landfills. Not just garbage but also construction debris is dumped at this lakebed. Credit: Pradeep KS 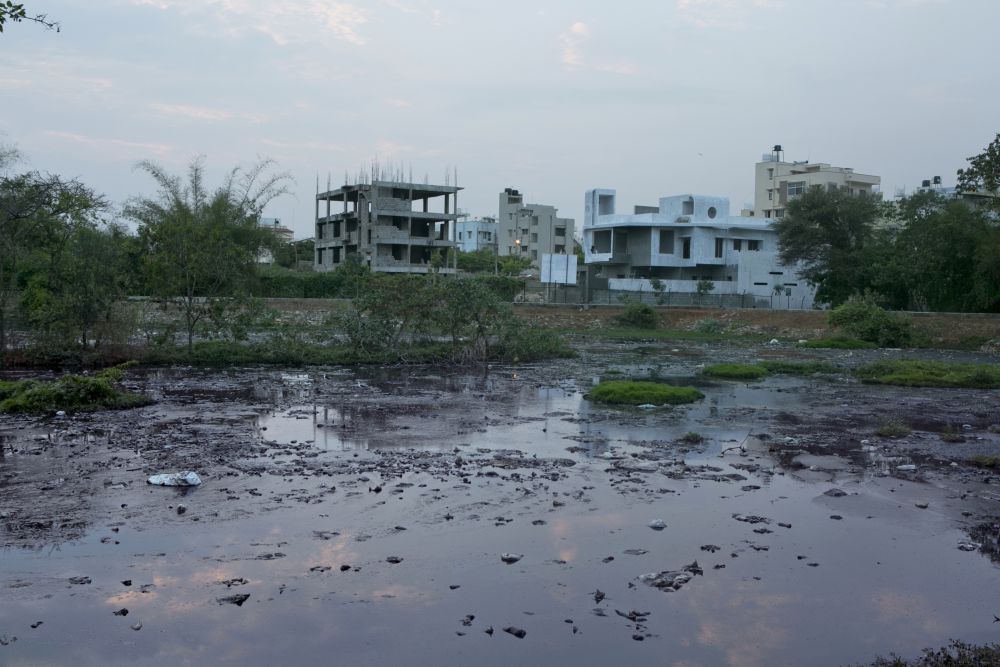 Mallathahalli lake in west Bengaluru’s Visvesvaraya is beset by the challenges posed by dumping of garbage and misuse – especially during festivals when waste and unsold perishables are dumped in it. Water from here flows to Kengeri and joins the Vrishabhavathi after Rajarajeshwari Nagar. Credit: Pradeep KS 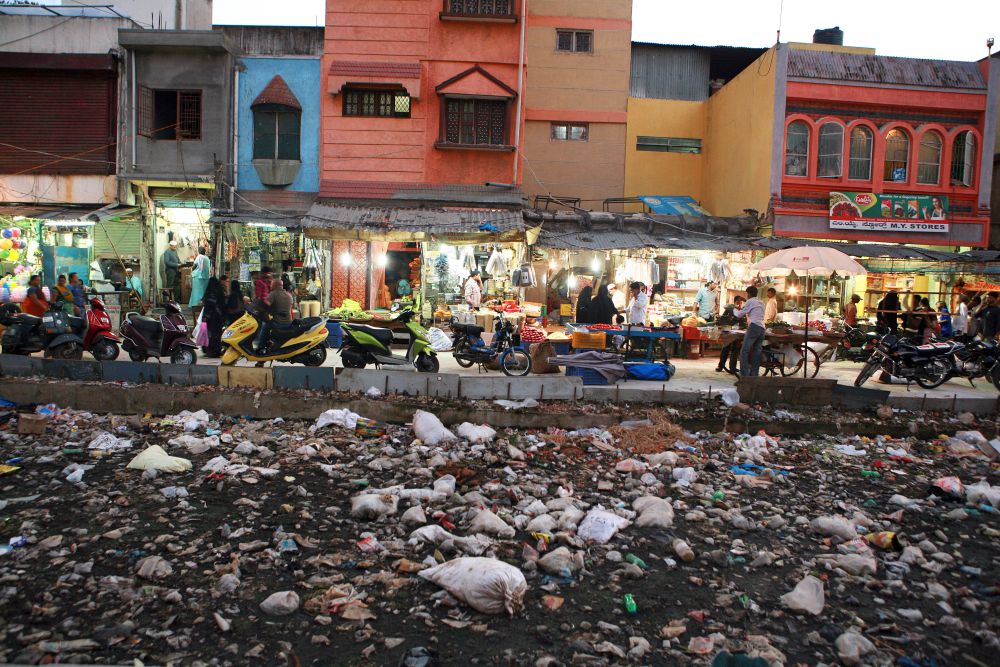 Municipal dry waste dumped in the raja kaluve at Shivajinagar obstructs the flow of drain water. Every monsoon, the drain overflows and floods the neighbourhood, causing severe distress to residents. Credit: Pradeep KS 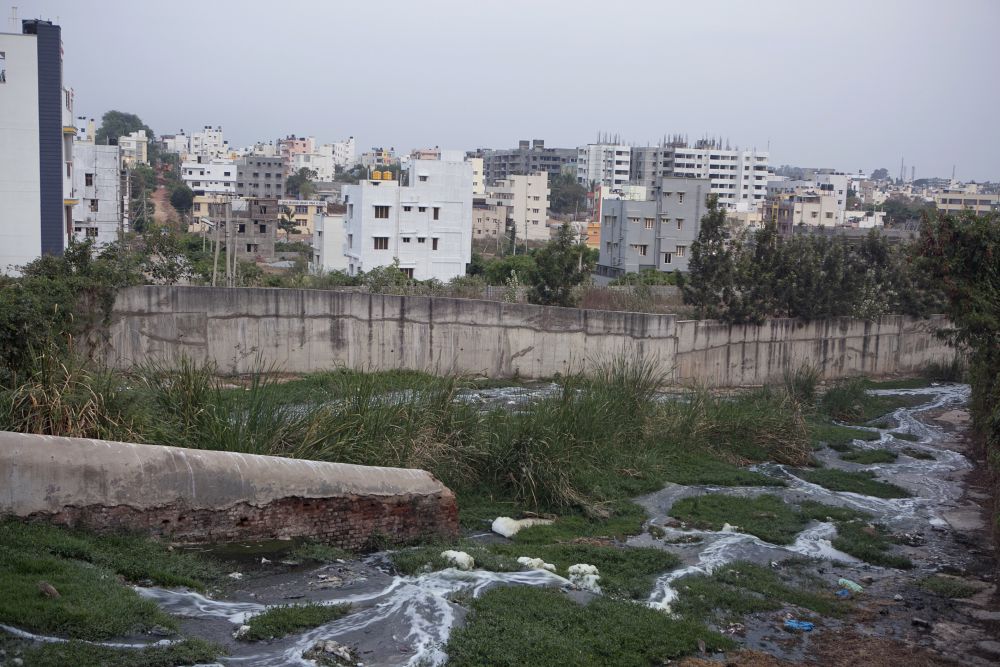 Bengaluru’s concrete jungle pays no heed to the drainage system. From Visvesvaraya layout in Bengaluru west, a neglected drain flows to join the Dakshina Pinakini in Kengeri. Credit: Pradeep KS 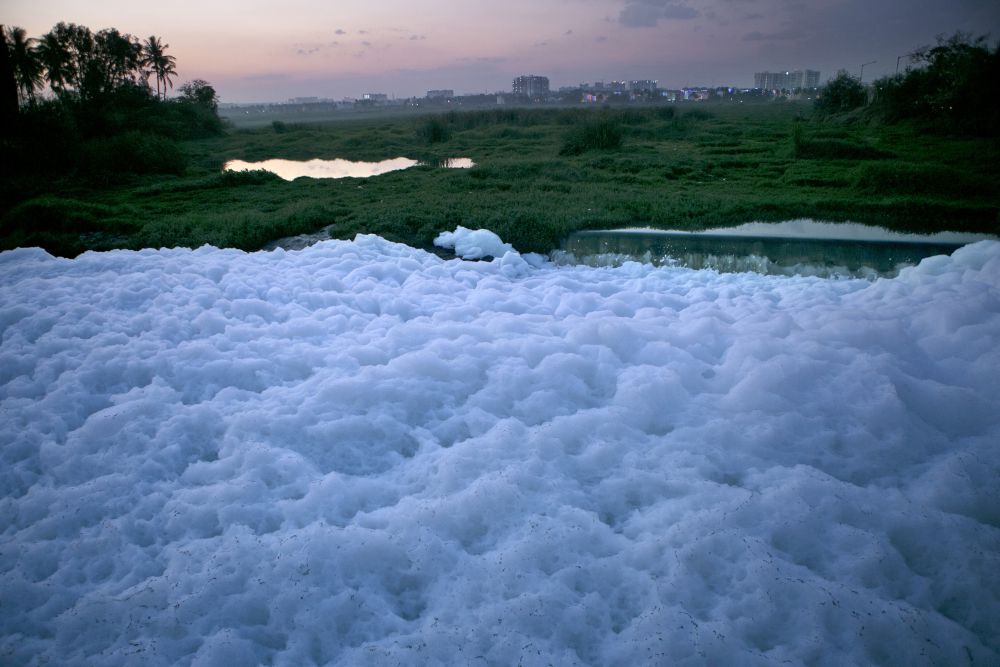 Varthur lake, with an area of 445 acres, is the city’s second largest lake and one of the most polluted ones. The froth on its surface is produced by effluents dumped by garment units, industrial waste containing phosphates and detergents, as well as waste from residences served by poorly-functioning sewage treatment plants (STPs), or no STPs at all. Credit: Pradeep KS 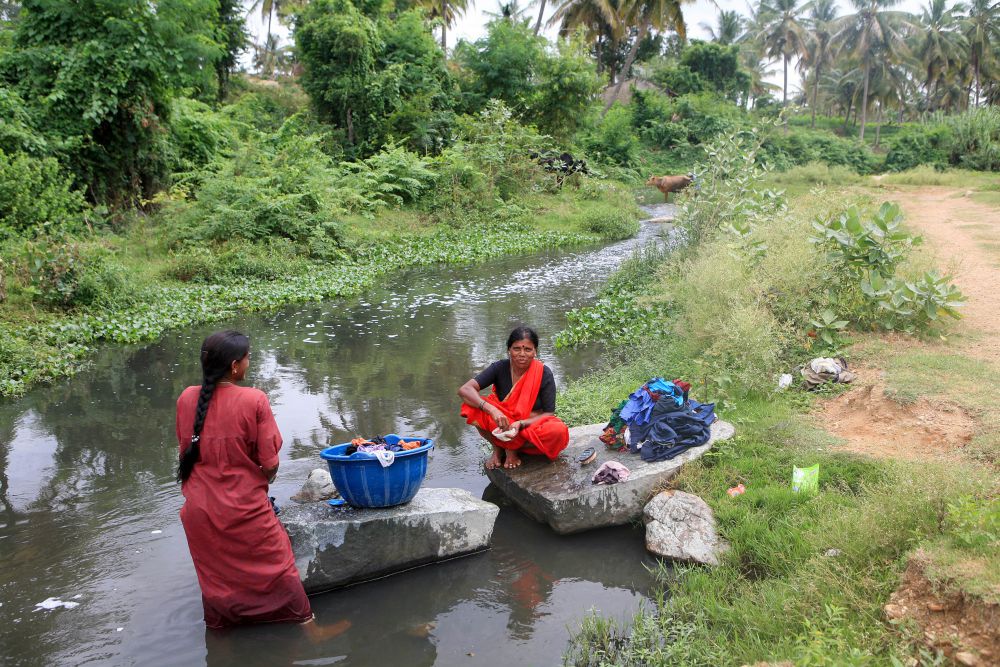 The Vrishabhavathi joins the Arkavathy river system at Ramanahalli, off Mysore road in rural Bengaluru. Women use it to wash clothes, but they later go home and rinse them with tap water. Washing clothes in the river and then rinsing them again is a common practice among villagers here as fresh, clean water is precious. Credit: Pradeep KS 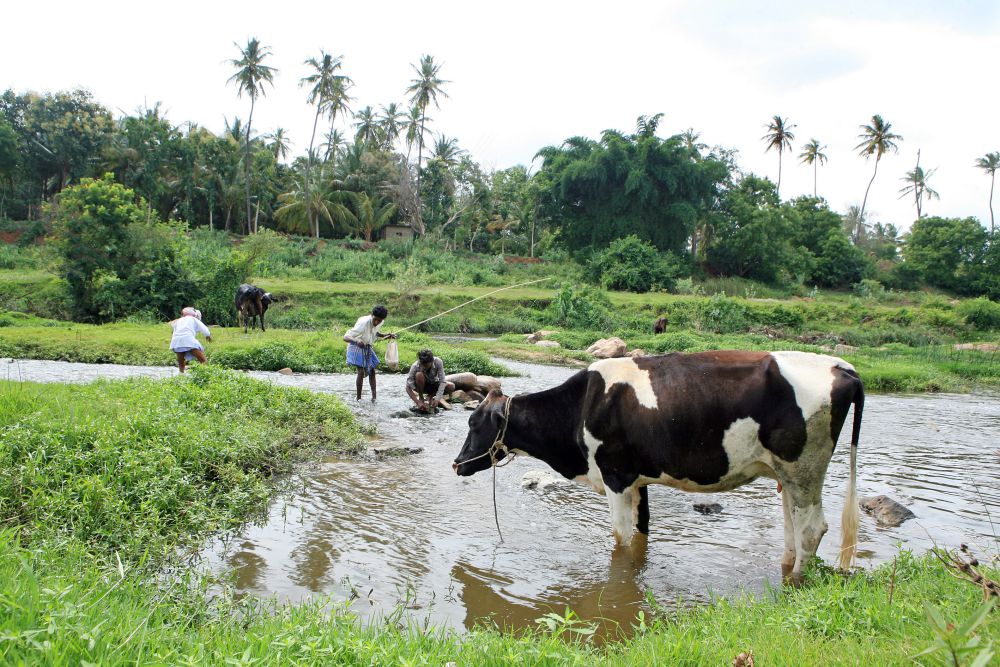 At Ganalu, in rural Bengaluru, villagers use the Vrishabhavathi to wash cattle. Fishermen look for worms and algae here to use as bait. In the monsoon when the Manchanabele reservoir is full, overflowing water from the dam enters the river at Ganalu. Credit: Pradeep KS 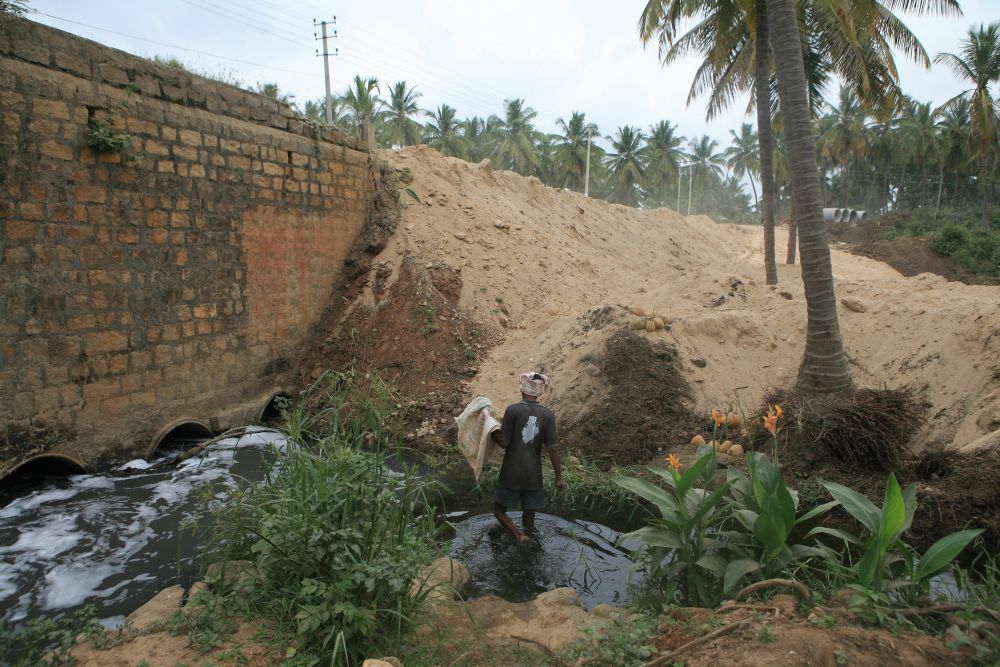 A farmer crosses a drainage channel at Byramangala. The water here is filled with urea, potassium and nitrogen – a reason why crops grow so well here. But the water is also loaded with heavy metals and hazardous chemicals from industries in Bengaluru and Bidadi, which enter the Vrishabhavathi valley. The contamination of the city’s water bodies has fueled the demand for vegetables and fruits that are chemical free. Credit: Pradeep KS