Beneath the Foam and Fire

Bellandur Lake's ghastly snow has been around for at least a decade, its flammable froth just one more piece in a long tale of decline that has caught far fewer headlines than the lake's current flirtation with death 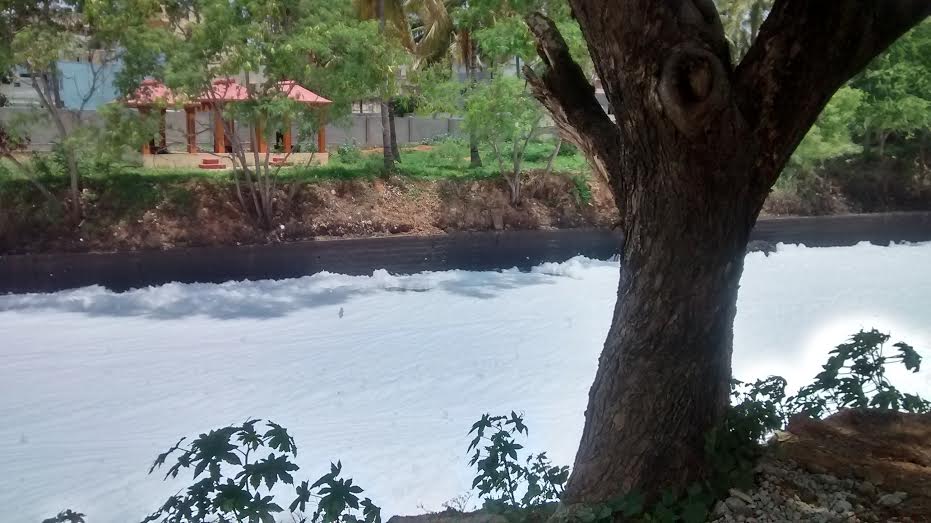 Note: This article was originally published on May 23, 2015, and is being republished in light of the Bellandur Lake catching fire again.

Bellandur Lake in the south-east of Bengaluru is most visible by its smell. You have to search to find actual water, given that most of the lake’s almost 900 acres are smothered in weeds. The high-rise apartment buildings on the lake shore have hopeful names like Vista Lagos (Portuguese for “lake view”), but even from these lofty residences one would see little but undulating green – and in the distance, perhaps, the outlines of a sewage treatment plant that has long been overwhelmed.

“People say Bellandur doesn’t have much life left,” says Rohan D’Souza, an educator and researcher who has studied the history of lake management in Bengaluru. Looking at the lake, this seems an understatement. What life Bellandur has left is just the hardest to kill: proliferating weeds that don’t need much oxygen, resilient catfish, a scattering of confused-looking egrets.

Despite the dense population of the area (gradually being swallowed by Bangalore’s IT belt), there are few humans to be seen here either. Most people on Bellandur’s bund road are in transit. The exceptions are those stopping to take cellphone pictures, mesmerized by the thick white foam at the lake’s two outlets. Here, water emerges from the chokehold of weeds and pours down a short waterfall. As it churns and merges with storm drain run-off, it forms a thick snow-white froth that obscures the canal completely. Water shows in black patches beneath, as through cracks in an ice floe. The foam would be beautiful if it weren’t also toxic. The wind carries pockets of froth into the light, where they bounce in the air.

Bellandur Lake entered headlines recently, after its froth ballooned with the rains and then caught fire on two separate days (most recently on May 18th). This phenomenon, however, is far from new. Bellandur’s ghastly snow has been around for at least a decade. Its flammable froth is just one more piece in a long tale of decline, which has caught far fewer headlines than the lake’s current flirtation with death.

City of a thousand lakes

“Bangalore was the richest place for the lakes,” says K. Jagannath, speaking fondly of the city in the 1960s. Jagannath was born and brought up next to Bellandur Lake, to a family that farmed land in the tank’s rich wetlands. He has fought the lake’s decline for thirty years, serving twice as the president of the Bellandur Gram Panchayat. A series of Public Interest Litigations filed by the panchayat in the 1990s led to a High Court order against the Bangalore Water Supply and Sewerage Board (BWSSB), demanding that it supply clean drinking water to Bellandur’s residents and improve sewage treatment at the lake. The BWSSB did not comply, and the residents filed more petitions. Fifteen years later, their case is still pending.

When Jagannath talks about Bellandur Lake as a living breathing space, it sounds like a different world. The lake once supported the water needs and livelihoods of almost twenty neighbouring villages. “The tank was a goddess for us,” he says. Today, the lake is so polluted that fishing is banned, although the erstwhile fishing communities are still there and still fighting the government to clean up the lake. The adjoining wetlands supported paddy fields – all gone now. Vegetables must be bought from elsewhere, rather than grown in soil where even the groundwater has become toxic.

How did it get this bad? Jagannath remembers a rapid decay in the 1970s, as Bangalore started relying more on Cauvery river water, pumped from over 100 km away, and less on local tank reservoirs. Even today, however, Cauvery water can only supply 60% of Bangalore’s needs, according to T. V. Ramachandra, a professor at the Indian Institute of Science who has monitored lake pollution for almost two decades. Although the city’s water shortage becomes worse by the year, its vanishing system of tanks (along with the ground water that they recharge) are increasingly becoming too polluted to fill the gap.

The tanks that Bangalore was once famous for mirror systems of tanks that were once built across South India. Far from rivers and oceans, the agrarian area that is now Bangalore long depended on a system of artificial irrigation tanks or keres for its water. Agara Lake, upstream of Bellandur, has inscriptions dating to the 9th century. Each successive ruler of the area built more irrigation tanks, from Kempe Gowda to Hyder Ali (who built a park and a tank at Lal Bagh). The rain-fed tanks connected with each other through a system of canals or raja kaluve that prevented flooding by taking advantage of the contours of the land, carrying overflow downhill. The British adopted these methods in the Bangalore Cantoment area in the 19th century, constructing Sankey and Millers Tank. A map of Bangalore from 1935 shows as many canals as roads, and dozens of lakes where sports stadiums, bus stations and residential layouts now sprawl.  By the mid-20th century, however, Bangalore was beginning to feel a land crunch in addition to its water crunch. Reclaiming land from water bodies “was a sharp trend in the latter part of the 20th century,” says D’Souza.

Today, Bangalore’s uneven terrain is most obvious when it rains, as the streets in low-lying areas (often reclaimed from lake beds) inevitably flood. The valleys of Bangalore are now conduits for sewage rather than irrigated water, and they still dump their effluents into Bangalore’s remaining lakes. In theory, sewage has to be treated before it is released into a lake. In practise, much of the estimated 500 million litres of sewage that reaches Bellandur Lake every day is not treated. The Bellandur treatment plant, servicing sewage from all of South and Central Bangalore, runs far below capacity – and further untreated sewage enters the lake through storm drains. Earlier, Bellandur was fed by rain and by overflow from Agara and other tanks upstream. In turn, it fed through outlet canals into Varthur to the east. Like other tanks, Bellandur would run dry seasonally even in the 1960s – but the lake has become perennial now that most of its volume comes from sewage and storm water run off. When a lake catches fire, it tends to surprise us – clearly something other than water is present. In the case of Bellandur, however, so much apart from water has been dumped in the lake in the past few decades, one wonders if the word “lake” is even still appropriate.

Ramachandra has been periodically testing the water at Bellandur lake for pollutants for many years now. “From 2000 to 2015, there was an exponential decline in the quality [of the water],” he says. His group has found high concentrations of phosphates in the water, which are one possible culprit behind the lake froth at Bellandur and Varthur. Phosphates, which are present in many detergents, froth in turbulent water.  Ramachandra and his group have also identified industries whose effluents end up at Bellandur (and downstream at Varthur), from aviation to electro-plating and textiles. Add industrial hydrocarbon-based effluents to frothy water, and the spark from a discarded cigarette, and you will have fire.

Clearly, the froth and fire at Bellandur are only the tip of a very toxic iceberg. Ramachandra says that after a half hour spent collecting data at Bellandur recently, two of his students developed skin rashes and one a headache with vomiting. For those who reside there, it is far more severe. “30- to 45-year-old people are dying now, in our village,” says Jagannath. The long-term public health implications of Bellandur’s present state remain to be seen – and if nothing is done, they stand to get much worse.

Bellandur is not the first water body to grow so polluted that it caught fire, and unlikely to be the last. The modern environmental movement in the United States is commonly dated to public outcry in the 1960s against industrial pollutants that clogged urban rivers and caused fires. Change has happened before, and can happen again. But how?

Some practical fixes might exist. D’Souza argues that setting up more local, small-scale sewage treatment plants could mean higher global efficiency. Harini Nagendra, a professor at Azim Premji University who studies human-driven ecological change in urban and forested areas, believes that we also need to expand research into biological treatment methods for waste, which could then be tailored to local conditions. “We need to experiment with how we can clean up these lakes in a way that is more sustainable, that doesn’t require so much electricity or sewage plants,” Nagendra says, citing lakes such as Kaikondrahalli, Jakkur and Lalbagh, where alternative water management techniques are now being tried.

D’Souza emphasizes that for local movements to work, such as the one that led to Kaikondrahalli’s rejuvenation, all communities that share space around a lake must come together – not always an easy task. At Bellandur, divisions of class and caste, of old residents versus new arrivals – of those with the resources to flee the pollution, and those too poor to leave – would all need to be surmounted before collective action could be taken. “For a lake the size of Bellandur it will take some effort to get all these groups to sit and talk, but that’s no reason not to try.”

Anjali Vaidya is a writer and grad student, based out of Bangalore and Southern California., and a staff writer at IndiaBioscience.