In the most recent of clampdowns and protests against oppressive hostel regulations, the authorities at the Regional Institute of Education, Ajmer bolt under pressure from the female student body. 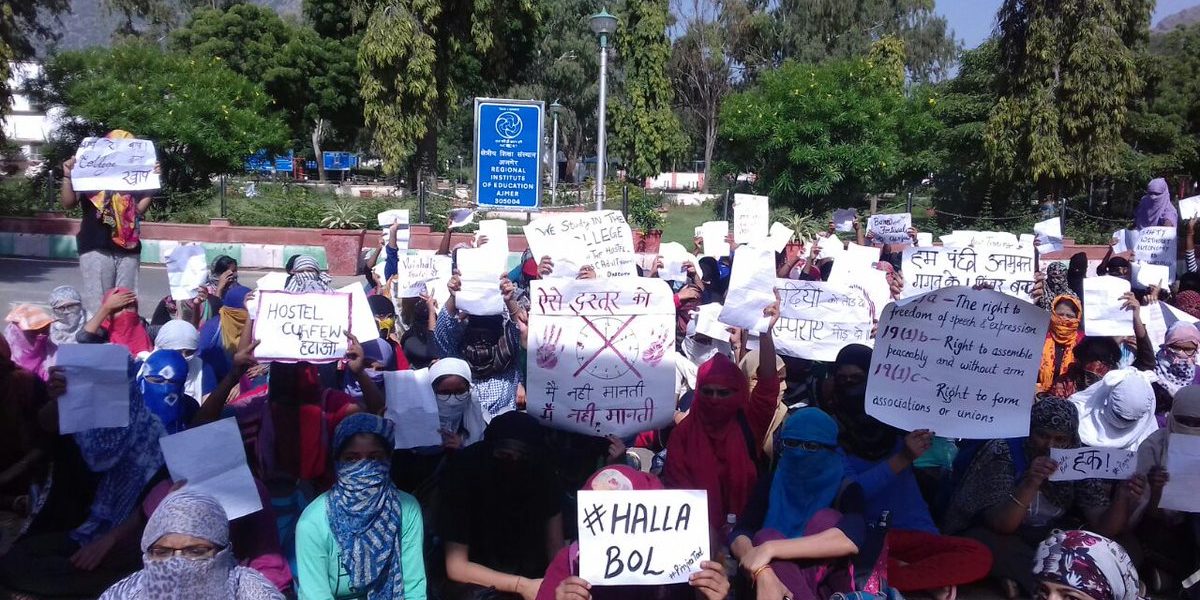 After two gruelling days of protests at the RIE Ajmer campus, the students, in association with Pinjra Tod, a women’s group that has substantively contributed to challenging discriminatory policies in hostels and paying guest (PG) accommodations for women, were able to successfully negotiate the terms of their demands.

“The Regional Institute of Education campuses do not have a history of demonstrations and the campuses are not politicised. The protests against curfew timings and access to basic services started with the Regional Institute of Education at Bhopal where students successfully campaigned to have their demands met by the college authorities,” said Avantika, a member of Pinjra Tod.

The RIE students’ list of demands sought a change in the rigid and stringent curfew timings imposed on them. The students consider such restrictions to be a highly objectionable and bureaucratic policy to stall their free movement within and outside the campus. For instance, in case of a medical emergency or where a student has been injured, prior notice from the dispensary is required before students can go out of the campus.

Besides restricting free movement, the authorities – particularly hostel wardens – introduced various other forms of censorship. Moral policing also manifested in the form of an informal dress code. Wardens and college authorities individually targeted female students who entered the hostel late in the evening by taking arbitrary action against them, questioning their moral character and intention for staying out late. For instance, one such retaliatory action against a student reaching the hostel beyond the prescribed time led to penalisation of the entire female student body and the enactment of additional draconian hostel rules and regulations.

The female students were not allowed to enter the campus from the Vaishali gate because the area was considered too secluded for them to access. Female students who decided to avail the library facilities on campus beyond curfew time had to be personally escorted to their hostel by a male faculty member. Extensions to their curfew deadlines of 6:30 pm in winter and 7 pm in summer were mandated only on exceptional occasions. Such restrictions left the students with little or no time to engage in extracurricular activities like sports or coaching classes. No visitors including family members were allowed entry at any point of time into the students’ hostels.

Once the 24-hour deadline given to the authorities to meet their demands lapsed on the evening of September 25, the female student body protested by camping out in front of the hostels all through the night, their faces covered to avoid recognition by the authorities. The authorities, coming down on the protesters, denied them food and other facilities from the hostel unless and until they suspended their protest and entered the hostel premises.

As of 10.30 pm 25/9/18: The admin stopped the mess staff from giving food to women. The women are prepared with enough food and water to sustain the protest tonight! You cannot break our will. #RIEKaPinjraTod #PinjraTod pic.twitter.com/dbdj7FflNT

In addition, the authorities contacted the parents of all the agitating students, warning them about the fall out of such protests.

“The college administration has already contacted and e-mailed our parents warning them about our behaviour and protest activities,” said one student, from the RIE Ajmer campus, who doesn’t wish to be named due to fear of retaliation from college authorities in the form of disciplinary action or interference in her academic result.

However, the college authorities were finally forced to yield in the face of the students’ resolve not to give in until their demands were met. On Wednesday, the faculty at Regional Institute of Education, Ajmer decided to accept the demands of the students.

“Its a big big victory for us. It actually took time convincing people that we were being deprived of our rights, so bringing people together itself was a victory.” Even as most of the demands were circumvented than accepted, this marks the start of something new! #RIEAjmer pic.twitter.com/bKsf4DZ2JY

The success of the RIE students comes at a time when university and college campuses across the country have been on the boil. From Delhi and Allahabad to Telangana, students – particularly women – have been on a warpath to demand autonomy of movement and equal access to campus facilities.

The most recent in the series of protests was witnessed in Hidayatullah National Law University and Panjab University, where female students challenged authorities’ decision to restrict their movement in public spaces and curfew timing for entering hostels.