Merely Ditching Orange Passports Not Enough. Here's What Needs to Be Done to Protect Migrant Workers

India must think beyond the narrow objective of protecting emigrants to the broader rationale of empowering them. 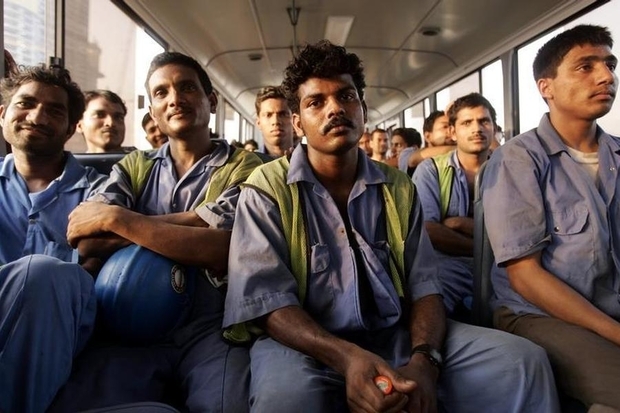 Workers sit inside a bus as they wait to be transported to their accommodation camp from a construction site in Dubai. Credit: Reuters/Regi Varghese

Facing flak from the opposition and the media, and with a public interest litigation filed in the Kerala high court, the Ministry of External Affairs (MEA) on January 30 withdrew its decision to issue passports with orange covers for Indian migrant workers. The PIL alleged that the policy was discriminatory against the marginalised emigrant labourers.

Even though the proposal has been abandoned, different kinds of passports continue to be issued to poor, unskilled workers. The exploitation of migrant workers in foreign countries that the proposal intended to curb continues unabated. In this article, I argue that while abandoning colour-coded passports was prudent, it is imperative for India to also reconsider its migration policy for vulnerable workers.

The country’s legal framework around migration has been spelt out in the Emigration Act, 1983. According to section 22 of the Act, semi-skilled workers cannot emigrate without an authorisation from the Protector of Emigrant (PoE). Thirteen categories of persons (all income taxpayers, persons holding class X qualification and children etc) have been exempted and placed under the emigration check not required (‘ECNR’) category.

Thus, persons who have not completed their matriculation require prior approval to travel for work to the 17 ECR countries (such as the United Arab Emirates and Qatar). This typically includes unskilled migrant workers belonging to marginalised sections of the society.

Neither the Emigration Act nor the Passports Act, 1967 contains the ECR and ECNR bifurcation. The bifurcation was created by a notification dated December 28, 2006, invoking section 41(1) of the Act as the source of its power. A stakeholder report by industry chamber FICCI and the International Labour Organisation pointed out that the Emigration Act does not grant the central government the power to exempt countries in the ECNR category. Section 41(1) makes it clear that the Centre can only exempt foreign employees and not foreign countries from the ECR check.

In other words, the ECR/ECNR bifurcation seems ultra vires the Emigration Act itself, which means that the central government exceeded its powers through this categorisation. Additionally, a large number of the exempted countries are developing countries and not developed ones. This makes the rationale behind the categorisation unclear.

Abolishing the ECR category seems like a solution so that no country is exempt from the Act. As a result, the artificial distinction between the skilled and unskilled emigrant would be removed. All workers would be afforded the same protection of government supervision under the Act, no matter which country they travel to. Adopting this system would heal the transgression from the Act and result in a uniform exit control policy across the globe.

However, adopting a uniform exit control policy (for all workers) may have a serious drawback. A 2013 paper published by the MEA criticised exit control for increasing the transaction cost for obtaining employment. Workers have to pay significantly higher sums to obtain clearances. This is because most workers rely on recruitment agents to facilitate the process of obtaining approval from the government.

Since all workers (both skilled and unskilled) would require clearances under uniform exit control, reliance on recruitment agents would increase. This is because recruitment agents are preferred over the formal process of approaching government authorities since they are usually more effective. This would, in turn, heighten ‘controlled informality’ in the emigration process through reliance on unauthorised agents and indirect routes for acquiring clearance. Resultantly, a ‘shadow institutional space’ is created which shapes into a parallel economy – across India and the Middle East. Additionally, since low-skilled workers are unable to secure clearances, they use irregular channels to obtain them. This puts them at the mercy of unregistered agents who ‘push’ them through as ECNR emigrants. These agents – while making large sums of money – take advantage of their unawareness by pushing them through emigration, often by paying bribes. As these workers travel abroad after making all due payments, they do not realise that they are actually undocumented emigrants. Moreover, the emigration authority loses control over the process once the worker leaves the Indian territory.

Direct recruitment by a foreign employer would remove dependence on intermediaries, reducing transaction costs. However, it has certain risks associated with it. It may result in further exploitation due to the asymmetric employer-employee relationship. Due to lack of awareness of their rights, unskilled workers may be tricked into agreeing to unfair and unconscionable transactions such as disproportionately low salaries and wages. In most cases, foreign employers may negotiate from a position of power, compelling the unskilled worker to accept unconscionable terms under the contract.

Direct recruitment, however, is much more desirable than relying on agents because of the reduced costs and increased transparency in emigration. This protects workers from being duped or ‘pushed’ into unsafe employment.

Moreover, the risks associated can easily be mitigated if the government takes adequate measures. This would entail enabling her to understand the migration process better. This may be done by raising awareness about the rights of workers through making guiding principles such as model employment contracts accessible to workers. This would mitigate information asymmetry and facilitate fair bargaining between the foreign employer and the worker.

The ILO principles of fair recruitment require that written contracts be in a language that the worker can understand. These should be provided sufficiently in advance of departure from the country of origin and be enforceable before the court. All of this would ensure that workers are capable of independently negotiating their agreements without the help of unscrupulous agents.

India needs to take a pragmatic turn towards direct hiring, away from dependency on recruitment agents in order to make exit control fair and robust. It must think beyond the narrow objective of ‘protection’ of emigrants to the broader rationale of empowering them.

Siddharth Sonkar is a third-year student at the National University of Juridical Sciences with an interest in legal policy. The author would like to thank Sohini Chatterjee at the Vidhi Centre for Legal Policy for her inputs.