The underlying problem behind the current standoff is the fundamental failure of the Goods and Services Tax regime. 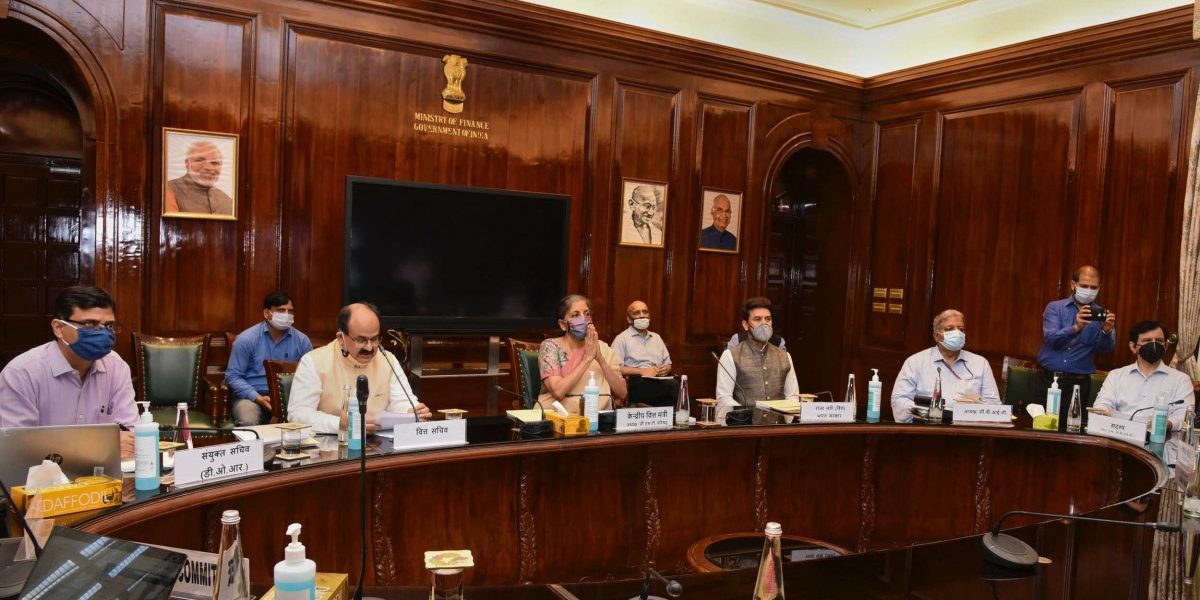 At least two state finance ministers have declared it a great betrayal. Many others have strongly protested. But the Central government under Prime Minister Narendra Modi and finance minister Nirmala Sitharaman has decided to go ahead with its decision to stop the transfer of compensation to the states to cover the shortfall in state-level Good and Services Tax (GST) revenues relative to a projection that those revenues would grow at 14% per annum from its base level in 2015-16.

It was that projection and the promise of compensation which underpinned the agreement to go ahead with the GST regime in 2017.

It is clear in hindsight that even before the COVID-19 pandemic – when the Centre’s revenues were falling because of a combination of a recession and unwarranted corporate tax concessions – it had decided to revisit its commitment to compensate the states for shortfalls in GST revenues. Delays in transferring not just the compensation but also regular IGST revenue shares were pointers to the new mood. Then the COVID-19 pandemic, which triggered a contraction and then a sudden, lockdown-induced stop in economic activity, struck. That drastically reduced revenue collections of both the Centre and the states. The impact on the states of that fall was particularly adverse because they had to bear a disproportionate share of the expenditures necessitated by the pandemic and were constrained by stringent borrowing limits. They had to turn to the Centre for resources and the permission to borrow more.

It was at that point that the Centre, after having cleared compensation dues for 2019-20, decided to go public on its decision to stop making compensation payments in excess of what could be funded by the compensation cess. Collections from that cess had also fallen because of the crisis. According to preliminary and by no means robust estimates, the compensation to the states required in 2020-21 is likely to be in the range of Rs 3 lakh crore, whereas the collection would be only around Rs 70,000 crore, leading to a shortfall of Rs 2.35 lakh crore. Of this, through computations that are still opaque, the Centre has estimated the shortfall due to “implementation of the GST” at Rs 97,000 crore and the balance as being the result of the COVID-19 pandemic.

The decision of the Centre to renege on its commitment to meet whatever shortfall arises was first made public rather nonchalantly in a statement reportedly made at a meeting of the Parliamentary Standing Committee on Finance by Union finance secretary Ajay Bhushan Pandey. In that statement, he declared that the Centre, in financial year 2020-21, would not fully compensate the states for the shortfall in revenues from Goods and Services Taxes. The justification was that the compensation fund, financed with the special cess, had not only failed to mobilise adequate revenues to compensate the states in full, but there were no past surpluses left to cover the difference. Needless to say, the states, especially those with non-NDA governments, objected strongly, pointing to the fact that even if there was a shortfall in the cess fund, the Centre could borrow and compensate the states, and finance that borrowing from future revenues accruing to the cess fund. The Centre was unwilling to consider that option.

Soon thereafter came the news that the Centre had made a reference to the Attorney General K.K. Venugopal inquiring whether the states had to be compensated in full despite the COVID-19 triggered crisis, and if so whether it is the responsibility of the Centre to do so. The AG reportedly held that the states had indeed to be compensated in full, but the manner in which the compensation had to be financed had to be decided by the GST Council. The GST Council, however, in his view, could not force the Centre to borrow to provide the resources if the latter was not willing to. In addition, on the question whether the states themselves could borrow to meet the deficit, he is reported to have held they could, but only after obtaining the required permission from the Centre. Would the Centre that had always leaned towards not allowing increased borrowing by the states, in the name of “fiscal discipline”, oblige?

The seemingly non-committal response of the AG provided the basis for the Centre’s subsequent response, which came after a GST Council meeting in which the states objected to the idea of them having to take on the responsibility of covering the revenue shortfall by resorting to borrowing, even if permitted to do so.

The GST Council meeting held on August 27, 2020 could not come to any decision on the matter. Thereafter, unilaterally, the Centre decided to offer the states two options.

In one, the Centre would coordinate the combined borrowing by the states through a special window to the tune of Rs 97,000 crore to cover the presumed shortfall in revenues resulting from “GST implementation” alone. The cost of servicing this debt (interest and amortisation of principal) would be covered with future revenues accruing to the cess fund, with the levy of the cess extended beyond 2022, when the Centre’s commitment to ensure the compensation over a five-year period (2017-22) comes to an end.

Also read: Why States’ Battle for GST Compensation Is More Important Than Ever

It needs to be noted that the decision to extend the life of the cess cannot be a decision of the Centre, but that of the GST Council. So, all that is being done is to give the states permission to borrow the sum aimed at covering the shortfall due to GST implementation without it being treated as debt of the states. Under this option the states can choose to borrow as part of their own debt financing programme, additional sums to the extent of 3% of their Gross State Domestic Product (GSDP) plus an additional 1% without meeting conditions such as implementing measures to improve the “ease of doing business”.

To recall, states which are subject to a 3% fiscal deficit to state GSDP ratio ceiling under the Fiscal Reseponsibility and Budget Management framework were allowed in May an increase in their borrowing limit by 2% of GSDP of which 0.5% was unconditional, and the remaining subject to conditions and performance. If a state does not exercise this possibility of additional borrowing to cover part of the ostensibly “pandemic-induced” shortfall in revenues, it would have to curtail expenditures considerably.

The second option offered by the Centre is one in which states together can choose to borrow from the market the Rs 2.35 lakh crore total expected shortfall in GST revenues (due to both implementation of the regime and the pandemic’s effects), but neither get the benefit of the interest payment being covered from the extended compensation fund (only principal payments), nor be allowed to treat the borrowing in excess of Rs 97,000 crore as outside of the states’ normal debt financing programme.

The “concession” here would be that either the whole of the compensation-linked borrowing in excess of the share in the Rs 97,000 crore of a state or a sum equal to 1% of its GSDP (whichever is higher) would be unconditional. Anything more would be subject to conditions. States can borrow without conditions to meet the shortfall themselves, but if they need to increase expenditures in the face of the pandemic, borrowing for the purpose would be conditional.

In a large country like India, an effective fight against a pandemic such as COVID-19 requires financial strengthening of its states. Photo: PTI/Files

As of Sunday night, four non-BJP ruled states have reportedly rejected both options. But, the implications of the Modi government’s offer to the states are manifold. First, whichever option the states accept, they would be foregoing a large part of the benefit from the imposition of a new cess by the GST Council to cover any revenue shortfalls in the period after 2022, when the five-year compensation period ends. Since the cess would be extended into the future to finance the cost of borrowing to meet current shortfalls, use of a cess to fund future shortfalls is largely foreclosed. States would have to rely on getting a consensus on raising rates or shifting items from lower tax categories to higher tax categories for additional revenues. But when doing so they would be handing over a part of those revenues to the Centre via Central GST and shares in the Integrated GST.

Not only have the states ceded their taxing powers to the GST Council and the Centre, but they are being forced to pledge potential future revenues to meet the current shortfalls they were promised would be covered by the Centre. Further, while they had been persuaded to cede taxation powers and join the Centre in the implementation of a shared project to realise a “one nation one tax” regime, they are being told that the onus of bearing the fiscal burden of a so-called “Act of God” in the form of the COVID-19 pandemic will not be shared.

Second, since borrowing hugely at a time when revenues are likely to remain depressed could precipitate a fiscal collapse, states are unlikely to exploit the unconditional and conditional increases in their borrowing limits to cover the “excess” shortfall in GST revenues being attributed to the pandemic. In any case such borrowing is likely to be at relatively high interest rates, since states have already borrowed large sums and there is no specially designed borrowing window on offer from the Centre or the Reserve Bank of India (RBI) for this purpose. This would mean that the only way the states can manage their budgets would be through a cut in development and social expenditures, at a time when the need for such spending is great. What the Centre is doing by reneging on its commitment is devolving austerity rather than the resources promised as part of “cooperative federalism”.

Finally, it is clear that all this partly results from the Centre wanting to avoid at all costs showing the borrowing on its books, as part of its neoliberal push to window-dress and manage its own budgetary figures to show a deficit that validates its claim of being truly “reformist”. It does not matter that the cost of borrowing would be met with transfers from the cess fund.

Underlying the current standoff driven by the “betrayal” by the Centre is the fundamental failure of the GST regime. That regime has kept GST revenues stagnant, though launched with the promise of 14% growth. Total monthly collections from state (SGST), central (CGST), and integrated (IGST) goods and services taxes and the compensation cess, first crossed Rs 1 lakh crore in April 2018. Yet there have been only nine out of the 33 months till March 2020 in which that mark has been exceeded in nominal terms.

The states were persuaded to accept the GST regime, declared a “game changer”, mainly because of the promise that their revenues from that set of taxes would grow by 14% a year, failing which they would be compensated. But that was just for five years. The question as to what would happen after five years was brushed under the carpet. Perhaps the states believed that, if needed, the compensation period would be extended. But the fundamental weakness of the regime, the recession and finally the pandemic have cut short the compensation period.

With the Centre reneging on its promise, states are beginning to see the folly of having ceded their independent taxation powers. If the federal system of governance must hold, perhaps the GST must go.