Critics, India's Bullet Train Project Could Be the Path to the Future

The only question that remains with regard to the bullet train project is whether the new team lead by Piyush Goyal and Ashwani Lohani can deliver. 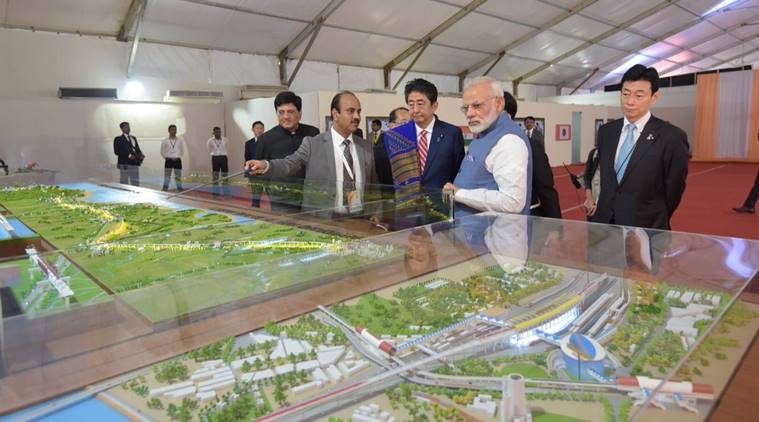 The bullet train project is finally on. The project is estimated to cost Rs 1.1 lakh crore, and will cover a distance of over 500 km from Mumbai to Ahmedabad in about two hours. The train is expected to be completed in 2022 to commemorate the 75th year of our independence. But does India need a bullet train now?

Skeptics and cynics say this move is leading to a waste of resources that can be put to better use for the poor of the country – more subsidised schools, hospitals, child nutrition and so on. They say this project has only a show-off value, which is a cruel joke in a country so miserably poor. This is indeed a strong argument against according priority to bullet trains in the circumstances India is facing currently.

In The Brown Sahib, noted Sri Lankan journalist Tarzie Vittachi wrote about a demonstration he witnessed of “revolutionary tyre wheels” for bullock carts, promoted vigorously by an Ahmedabad institute in a village. He inquired of a bystander who seemed like he would avail the cheap loan to buy the cart; the fellow pointed to Vittachi’s old Austin car standing by the roadside and said he would rather go for the car if Vittachi put it up. Vittachi somberly concluded the nets on the Raisina hill have no clue about what folks in the countryside desire. That was in the Nehru era, more than half a century ago.

Recall the more recent doubts cast on the now ubiquitous mobile phone, the metro train with its costly fare, and the computerisation of government offices. Each is now a success, each is now part of our lives and our kids would not even know a life without them. In short, the prevailing cynicism about the bullet train, whether on the street or in learned circles, is completely out of whack with what people really desire.

From the economic, or more precisely financial viewpoint, the Japanese loan for 80% of the project cost, which is almost interest free (0.1% only) with a moratorium of 15 years before repayment commences over 35 years, cannot be bettered.  Is there an exchange rate risk caused by the appreciation of yen against the rupee? Perhaps, but if the risk is hedged by paying some additional cost, the change fluctuation risk can be managed. It may still work out relatively cheap. Besides, the technology is also coming packed with the loan, which is generous. It will enable local manufacturing to scale up both in regard to railways and others – there are bound to be spin-off advantages accruing from it for associated industry in general. Therefore, the argument of wasteful use of resources also is unsubstantiated.

India’s common people, on the one hand, worry about the safety of their women, children and elderly, and on the other, about the lack of business opportunities. The concern for their kids’ malnutrition, education et al, is beginning to be considered an insult to their own ability to take care of themselves and their family. The paternalism of the feudal mai-baap sarkar is increasingly seen, at least by the young adults, as such. The socialists pushed for state-sponsored schemes that enabled corrupt middle-men, petty babus and pettier netas to fill their pockets. This was universally true, in erstwhile Soviet Union, in China and in every other socialist country in the world. Prosperity has taken place only where the state ensured law, order and level playing field. Productivity is the only mantra worth adhering to. 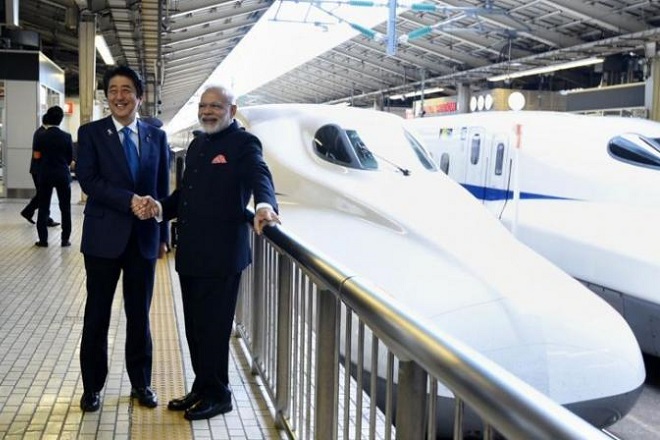 The biggest benefit of the bullet train project is that it would shrink distances in this vast country. Credit: PTI

But the biggest benefit of the bullet train project is that it would shrink distances in this vast country. It will lead to a free and frequent movement of people, expand jobs and socialising opportunities as well as politicking, if the young are so inclined. The country will be welded together far more strongly in a couple of decades when a dozen more such bullet trains travel between metropolises such as Delhi, Jaipur, Dehradun, Chandigarh, Lucknow and the like, and in similar clusters in the south, east and west, and then across the country over what is known as the golden quadrilateral: Delhi, Chennai, Mumbai and Kolkata – each connected to the other directly. Historically, railways have played a vital role in the country’s economy, society and politics. Since independence, however, this sector has faced neglect and over the last 50 years or so, it has been cursed with the most unimaginative leadership – political and bureaucratic. But there were extenuating circumstances; the entire country was ruled by mediocrity, timidity and an absence of pride unlike in the first flush of independence.

Political ideologies are totally irrelevant today. The new regime in India, particularly, may be bereft of intellectual heft, as Ramachandra Guha said, but it has to be credited with concentrating on programmes – taken out of the UPA era even – and attempting boldly to do things: demonetisation, Goods and Services tax (GST), ratcheting-up relations with Israel, calling China’s bluff, surgically striking Pakistan and claiming to have done so. What will be the result of these actions in the long run is arguable. From a comatose era that preceded it, this action-oriented change is welcome. It may well take this regime past the 2019 election for a further five-year period; the opposition’s disarray only heightens the possibility.

The only question that remains with regard to the bullet train project inaugurated on Thursday is whether the new team of railway minister Piyush Goyal and Indian Railway Board chairman Ashwani Lohani can deliver. Goyal has – in his short period in the limelight – already proved his dynamism. The other half of the team, Lohani, is a railway officer of the mechanical department who brings rich and varied experience from the public sector – he was earlier the commissioner and managing director of Madhya Pradesh Tourism Development Corporation, chairman and managing director of India Tourism Development Corporation and of Air India – on top of railway experience. Together, they can potentially deliver. But Lohani may not have five years left. At any rate, the project should be monitored on a monthly or at least a quarterly basis against publicly pre-declared milestones. Can the Goyal-Lohani team do for bullet train what E. Sreedharan did for Delhi Metro? They do not lack political backing to achieve it.

C.S. Rao is a former Director Finance at the Centre for Railway Information Systems.