MEA's Latest: BJP the 'Only Alternative', Only Hindus Are 'Spiritual'

Book on Deendayal Upadhyaya published by external affairs ministry says the BJP is the only political alternative in the country, Hindu thought is Bhartiya thought, and only Hindu society can be spiritual. 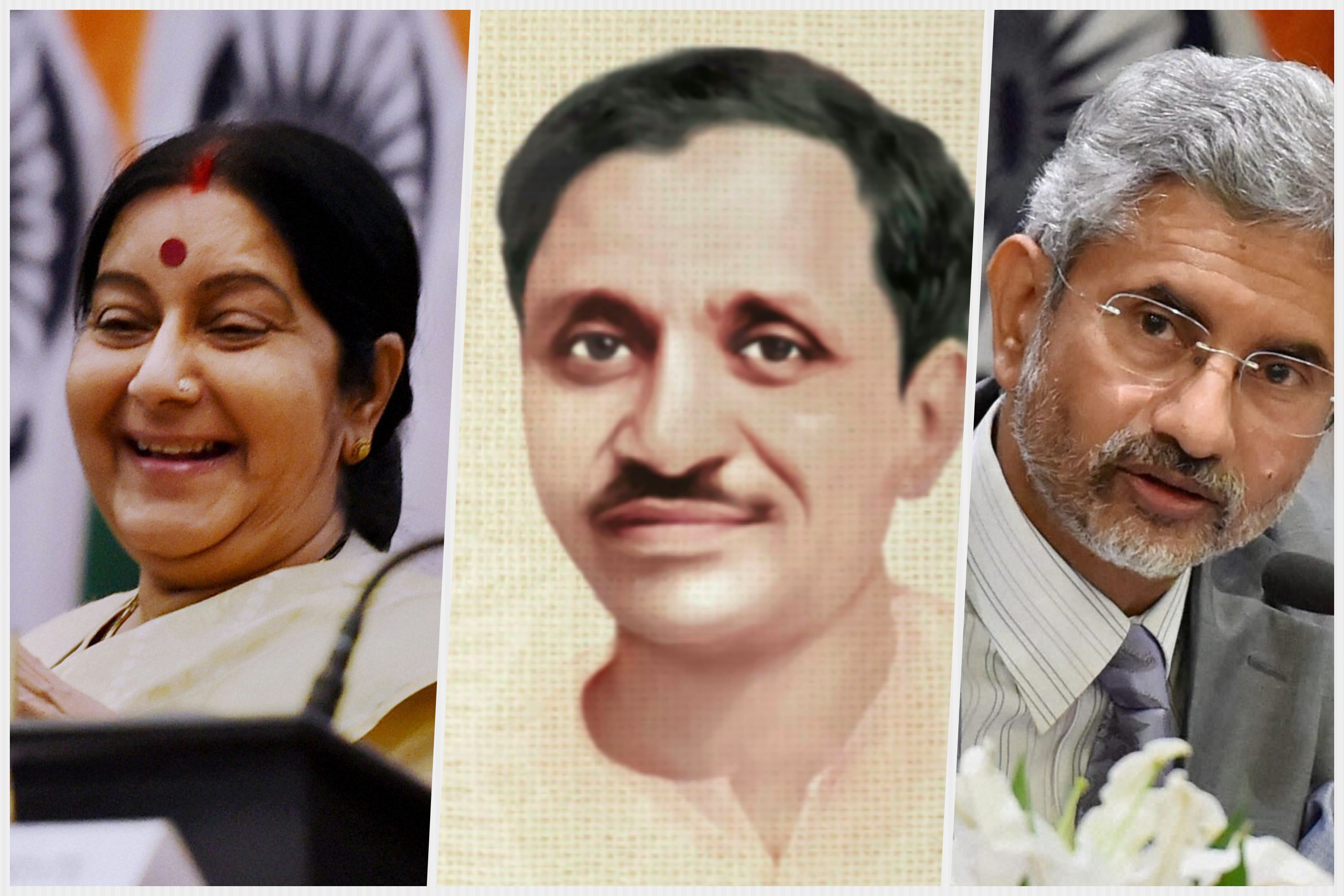 On September 22, 2017, a few days before the birth anniversary of RSS ideologue and Bharatiya Jan Sangh founder Deendayal Upadhyaya, the Ministry of External Affairs uploaded an e-book with the title Integral Humanism on the home page of its official website.

Apart from being shoddily written and edited, the e-book – which external affairs minister Sushma Swaraj describes as the product of the “hard work of MEA officials” – falsifies independent India’s early political history and shockingly describes the Bharatiya Janata Party as the only political alternative for the country.

“When India’s struggle for freedom was covered under the shadow of two-nation theory, at that time in 1942 he started his public life through Rashtriya Swayamsevak Sangh. He engaged himself in Sangh-work as an excellent organiser, writer, journalist and orator…

“The democracy of the country required a capable Opposition; Bharatiya Jansangh (sic) emerged as a strong Opposition in the first three Lok Sabha elections. He made full preparations so that with time this Opposition becomes alternative …

“From 1951 to 1967 he remained the general secretary of Bharatiya Janshangh (sic). He got the responsibility as President in 1968. Suddenly he was murdered. Only the party, Bharatiya Janata Party, developed by him became the political alternative.” (emphasis added) 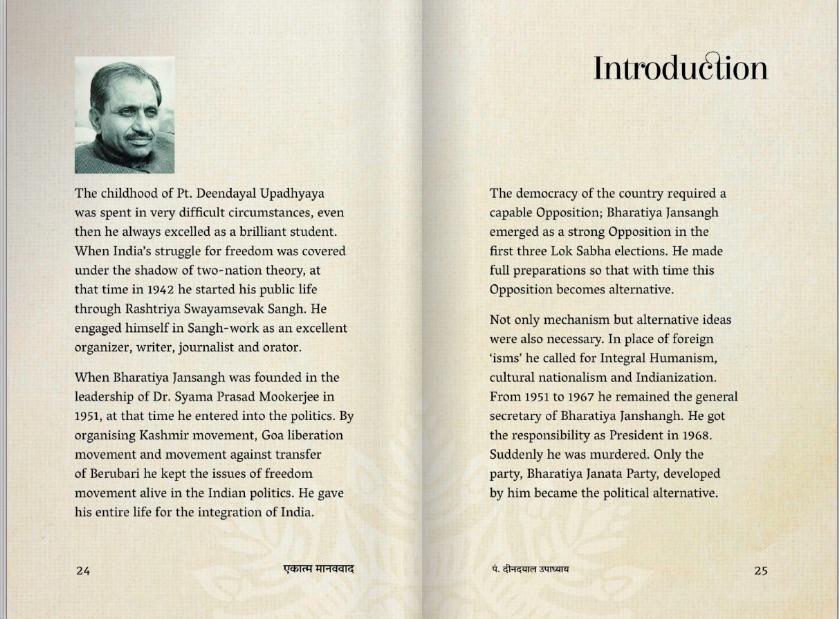 Pages 24-25 of Integral Humanism, e-book published by the Ministry of External Affairs, September 22, 2017.

Is this merely sloppy writing and translation or is an attempt being made to promote the BJP at the taxpayers’ expense?

Is it the job of the Ministry of External Affairs to declare which party is the political alternative for the country? Is a ruling party allowed to misuse the institutions of government, not to speak of public funds, to publish and distribute party political propaganda?

Upadhyaya never held public office and never won an election to parliament or a state assembly. He never took part in the freedom struggle. His sole claim to fame is that he led a political party whose legatee rules India today.

The foreword of the e-book has been written by Swaraj, who has a reputation for political restraint and fairness. Surely she cannot approve of the MEA becoming a mouthpiece of the BJP? And what has happened to the senior officials of her ministry, whose duty is to serve the country and not any political party, and who are respected around the world for fighting tooth and nail over every word and comma that goes against the national interest. How could they have signed off on such a publication that undermines the democratic system of the country?

The introduction also distorts the reality of the first three parliament when it asserts that the Bhartiya Jan Sangh “emerged as a strong Opposition in the first three Lok Sabha elections”. In the elections of 1951-2, 1957 and 1962, the Jan Sangh won 4, 4 and 14 seats respectively. The actual Opposition to the Congress was the Communist Party of India, which won 16, 27 and 29 seats respectively.

The MEA’s e-book is part of a big push the BJP and RSS are making to provide themselves with some sort of respectable ideological cloak. Their actual gurus – K.B. Hedgewar and M.S. Golwalkar – are too well known and too controversial to withstand critical scrutiny but Upadhyaya’s life and views are largely unknown and can thus be used to make the Sangh’s Hindutva philosophy more palatable to a wider audience, perhaps even an international one.

Upadhaya was born in 1916 but the only act of significance that the MEA’s brief hagiographical account can record about the first three decades of his life – when the best of his generation were fighting for India’s freedom against the British – is that he joined the RSS in 1942.

The rest of the book is a summary of Upadhyaya’s ‘integral humanism’, a pastiche of homilies strung together, mostly harmless and tautological but some that contradict the Indian constitution – Eg. ‘No fundamental rights … are eternal. They are all dependent upon the interest of society. In fact these rights are given to the individual in order that he may perform his social duties’. 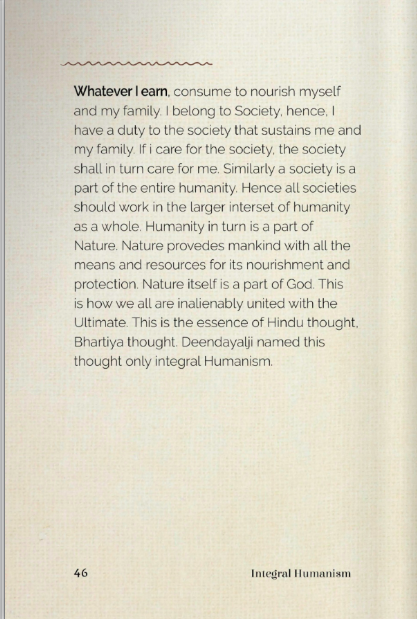 In keeping with Upadhyaya’s attempt to gloss over the ‘Hindu’ identity of Hindutva by using words like ‘Dharma’ and  ‘Bhartiya’, the quotes or summaries – it is not clear how the contents have been assembled – in the MEA’s e-book also explains his philosophy with the use of these euphemisms.

However, after defining Dharma as “eternal principles that sustain an entity”, the book leaves the reader in no doubt that one is talking about Hinduism: “Our scriptures tell us that to follow the Vedas, to act according to the fundamental principles of our scriptures, to entertain truthful and pious thoughts and thus to develop the virtues in us is Dharma.”

The use of the phrase “our scriptures” in an MEA book is odd, to say the least.

Most disturbing is the neat equation the MEA makes at the end of the e-book between “Bharatiya thought” and “Hindu thought”:

“Nature provides mankind with all the means and resources for its nourishment and protection. Nature itself is a part of God, This is how we all are inalienably united with the Ultimate. This is the essence of Hindu thought. Bhartiya thought. Deendayalji named this thought only integral Humanism.”

These peculiar theories may form part of Upadhyaya’s life and work but they represent the thinking and philosophy of a political party, the Bharatiya Janata Party, and its parent body, the RSS. Let them publish and circulate this sort of literature to their heart’s content. Please keep the MEA out of this.