Undoing Erasure: What the 4,000-Year History of Palestine Tells Us

In his new book, Nur Masalha has done great service to the diverse background of the Muslims, Christians and Jews who peopled this land. 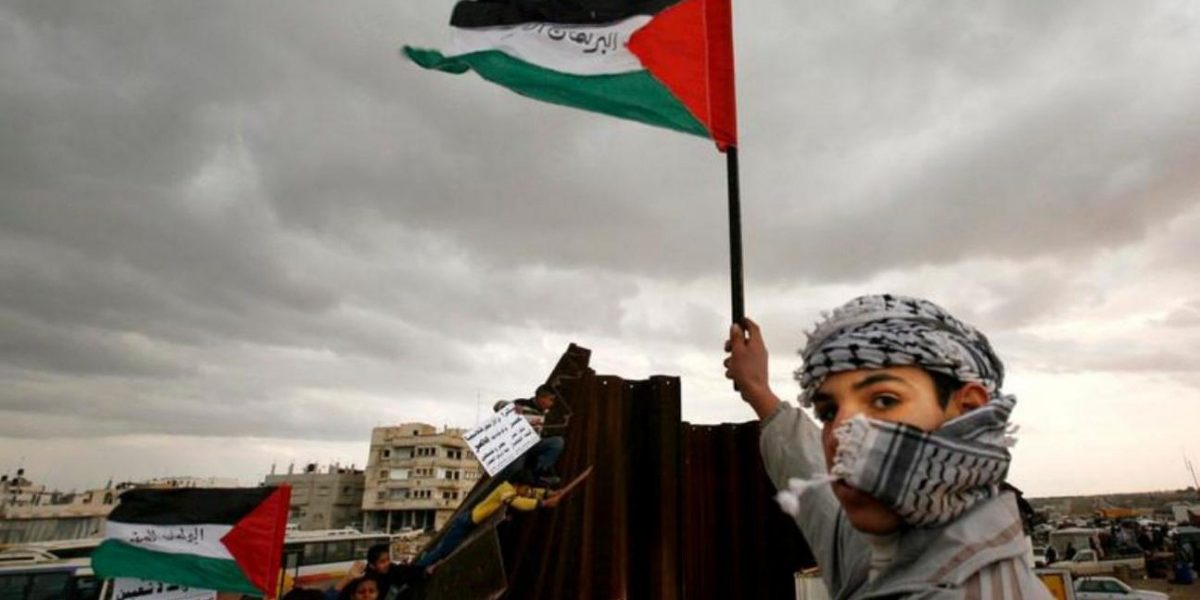 A Palestinian waves a flag near a destroyed section of the border wall between the Gaza Strip and Egypt. Photo: Reuters 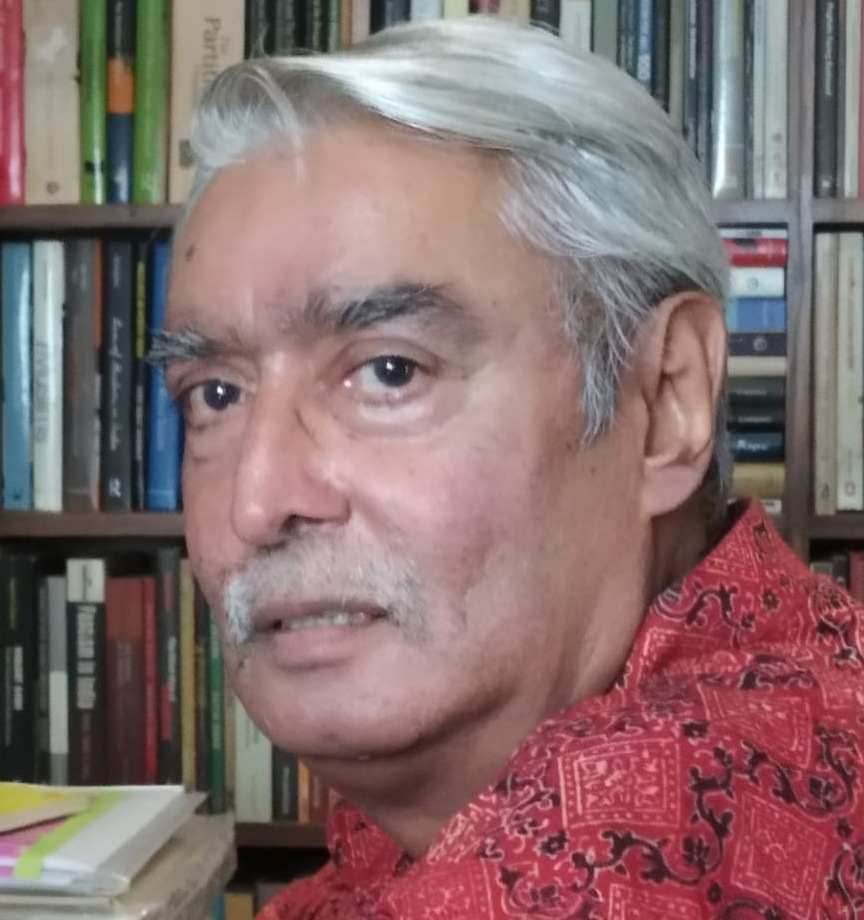 Way back in our youth there were three main international battles being fought. Vietnam, Cuba and Palestine. Two of them have been “won”, but Palestine remains on the agenda of all thinking and feeling peoples of the world. Over time, and thanks to the propaganda of the western media against the Arabs, support for the Palestinian cause has faltered. Their humiliation was capped by defeat in the Six-Day War of 1967.

That Arabs collectively could not defeat Israel led to the enforcement of a perception that they were a backward people. Surely the Arabs and therefore the Palestinians deserved to lose, asked the West? It was only much later when I read Tanya Reinhart’s Israel/Palestine 1948 that I realised the story was more complex than what the American media would have us believe.

Subsequently, there have been a plethora of writers including Israeli Jews, and of course Palestinians, writing against the ruling establishment of Israel. Apart from Edward Said, they include Israel Shahak, Shlomo Sand, Uri Davis, Norman Finkelstein, Rashid Khalidi, Ilan Pappé and so on.

Meanwhile, Zionism and Hindutva have much in common. They both fiddle with history by deliberately confusing faith and mythology with facts of history. Hindutva’s claim that the Harappan civilisation (apart from being the oldest) was Aryan and that Aryans were always present in India, flies in the face of all genuine scholarship. But they persist, because not to do so would belie the statement of Savarkar, the father of Hindutva, who insisted that India was not just the janmabhoomi (birthplace) of the Hindus but also their punyabhoomi (holy land).

You see, since India  is the janmabhoomi of all those born in India, including the Christians, the communists (yes, even them!) and also those hated Muslims, punyabhoomi has to be the touch stone since all Hindu heroes and their heroics were in the land of India while the prophets and the heroics sacred to Christianity and Islam happened elsewhere.

Also read: The Silence That Hangs Over Gaza, the World’s Largest Open-Air Prison

However, Asko Parpola of the University of Helsinki, a Vedic scholar and one the most prominent among those attempting to decipher the Indus script, has indicated that many of the rituals of Hinduism had their roots in central, west and south Asia. The claim then of only India being the punyabhoomi of the Hindus requires some rethinking.

Zionism, the creed of the Israeli State (not of the Jews mind you, just like Hindutva is not the religion of the Hindus but only the politicisation thereof) asserts and would have us believe that the “concept of Palestine is a modern invention or one constructed only in opposition to Israel”. 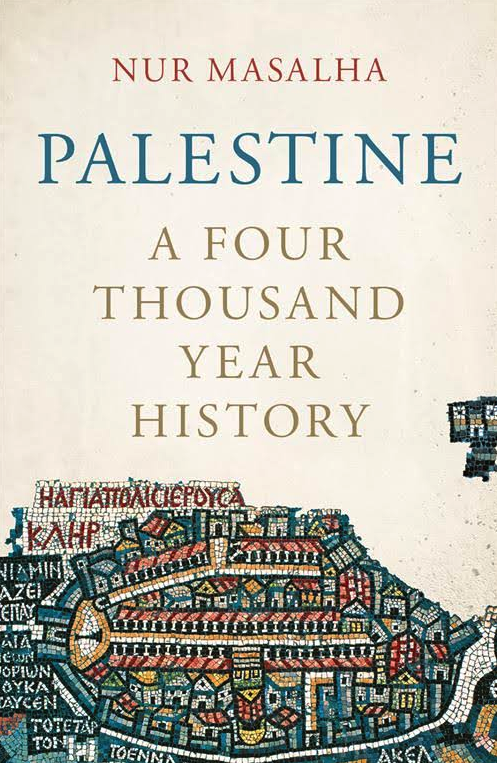 Masalha’s book Palestine: A Four Thousand Year History is a scholarly refutation of that creed.

He has painstakingly and meticulously scoured various documents right from those of Ancient Egypt in which the land was called ‘Peleset’ in the documents of Rameses II and III. Documents in the form of clay tablets and later scrolls of Assyrian, Christian, and Muslims indicate a clear continuity in the mention of ‘Palestine’ right down to the formation of the Israeli state. Very often, even Jew historians used the word ‘Palestine’ in favour of their Canaan nomenclature.

This clearly indicates that not only did Palestine exist in the minds of its inhabitants but also in those of others. Masalha’s grouse with western historians of Palestine — that they only deal with the land, and are hardly interested in the people, the Palestinians, seems therefore valid.

To believe in one’s faith is the right of everyone. And so should it be with Jews. However, when one begins to assert the statements given in one’s gospel as the historical truth, problems arise especially if that belief impinges on the present status of others. One may believe in the Bible and its parables, but to assert them as facts of history is to open the proverbial can of worms.

As quoted by Masalha, Zeev Herzog, professor of archaeology at Tel Aviv University is one who has maintained that there is no evidence of Jews ever having been in Egypt, of having wandered in the desert, of having conquered the land in a military campaign. He further stated that these facts have been known for years but no one would like to hear about it.

Masalha also says that while the contribution of the Jews to the multi- faith pluralist heritage and long history of Palestine is undeniable, the stories of the Old Testament may not contain historical facts.

Perhaps the Zionist belief that the question of Palestine has been raised only recently is to salve their own guilty conscience for having usurped the land of others. Masalha strongly asserts that the history and heritage of Palestine didn’t just begin with the movement in the “late Ottoman period and the Zionist settler-colonialism before the First World War” and that, the narrative of ‘Arab versus Jew’ is a case of obfuscation at best.

Till the coming of European Jews into Palestine, its people were all considered to be Palestinians and Arabs, whether they were Jews, Christians or Muslims. In fact, in the Middle East there were only Arabs whether of Jewish, Christian or Muslim persuasion.

They were all Semites as their language was Semitic, be it Hebrew in the time of Abraham, Aramaic in the time of Jesus Christ or subsequently, Arabic. Today, the Zionists want to patent the word Semite to mean only Jews. This flies in the face of linguistic and historical fact.

The names of Palestinian villages and towns have remained relatively unchanged. This was mainly because they were based on foods, fruits and the natural geography of the respective areas. It was the names of the provinces and administrative units that changed as they were given by succeeding rulers for their own administrative purposes because such names, as has been seen in history, are markers of the power situation on the ground. And that is why, when regimes change, place names follow suit. Rhodesia changed to Zimbabwe, Constantinople to Istanbul, al-Quds to Jerusalem and Palestine to Israel. Similarly Bombay was changed to Mumbai, Madras to Chennai and Calcutta to Kolkata. Geography does tend to become history and not only ecologically speaking.

Interestingly, Masalha exposes the Hebrewisation of the names of the Israeli political, military and intellectual elite of the Left, Centre and Right persuasions. David Ben-Gurion was born David Grun in Russia; Golda Meir was born Golda Mabovitch in Ukraine; novelist Amos Oz was born Amos Klausner in Mandatory Palestine after his Zionist parents immigrated there in 1939 from East Europe; the poet Yehuda Amichai was born Ludwig Pfeuffer in Germany in 1924 and so on.

Also read: For Palestinians Under Israeli Occupation, Regard for India Runs Deep

The name changes took place only around the time of the declaration of the state of Israel in 1948 because till then it was advantageous to have their original European names. Obviously, later it was to indicate their continuity from the so called expulsion way back in the mythical and historically unproven past. The case of self-antiquating and self-indigenising representation by Ashkenazi Zionists as a “return to history” comes to mind.

Some new Israeli place names have been concocted to sound similar to the old Palestinian ones, like Ascalon from the Arabic Asqalan, al-Nasirah or Nazareth was made Natzrat, Jaffa the port city became Yafo and so on, in the hope that even native Palestinians in time would so refer to them, thus legitimising the new nomenclature. 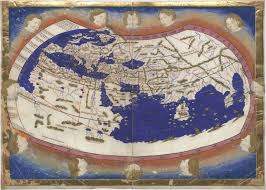 Not only words in documents, Masalha also refers to maps in history which mark out the geographical space with Palestine as the name, for instance: Ptolemy’s map. Based on this, a map was produced by one al-Idrisi in the 12th century AD. This map of the world, far in advance of its time, depicts Filastin in Arabic.

Masalha’s grouse with historians generally is that almost all of them deal only with the kings and their conquests and their successions and do not delve into the cultural, creative and culinary achievements of the Palestinians.

Also, their main interest is in trying to find out the external influences in Palestinian Islamic art and architecture. Perhaps that might give them solace – the knowledge that they had a hand in the achievements of Ayyubid and Mamluk Jerusalem (13th century AD). In the process, they fail to see the history of Palestine from within, so to speak. They also fail to see the glass industry and glass jewellery of al-Khalil in the middle ages and the Palestinian school of mosaics, both of which have continued into the modern period. Incidentally, Palestinian mosaics were used in the third millennium BC in Mesopotamian temples and palaces!

Philistia was inhabited by the Philistines. The meaning of the word was demeaned down the ages to refer to people considered boorish but who actually created an advanced civilisation according to the Old Testament, which held sway over the Pentapoli of five cities: Gaza, Ascalon, Ashdod, Ekron and Gath. They were “sophisticated sea farers and highly advanced architects and urban planners, artistic potters and weavers and ivory and metal workers”. They had a very developed naval technology. Palestine flourished culturally and economically based on its “soft power”: its holy places, its academies and libraries.

Ignoring history, Zionism was hatched in Europe in the 19th century by European Jews. It was pushed and promoted by Christians in England in the 20th century fearing a flood of Jews in England from the Continent at the end of World War I. Hence the Balfour Declaration that Britain will in effect help the Jews get a homeland. At that time, Palestinians – who included Muslims, Christians and Jews – were considered the “wretched of the earth” and so were not allowed any say in the matter. Initially, there was only a trickle of Jews into Palestine from Europe. In fact, till the declaration of the state of Israel in 1948, Jews only owned 6% of the land in Palestine.

After World War II, the flood gates opened and the trickle became a flood. Zionist militias shot, killed and drove out the hapless and unarmed Palestinian Arabs who ran from their homes and villages. These homes and villages were then occupied by new arrivals to Israel, just as events unfolded here with the Hindus, Sikhs and Muslims on both sides of the newly created borders in 1947. In India, the cleansing and occupation was mutual; in Palestine it was one-way.

Over the subsequent decades, things have got worse for the Palestinians.

Nur Masalha has done yeoman service to the cause by writing this definitive history of the land and the people, including the Jewish, the Christian and Muslim Arabs of Palestine.