The WHC has been painted as an “ideas” fest rather than an effort at Hindu revival, but the list of speakers clearly shows that the idea is to promote Hinduism and Hindutva.

Washington: India’s Vice President M. Venkaiah Naidu and RSS chief Mohan Bhagwat will both be featured speakers at the World Hindu Congress (WHC), an event that has become mired in controversy and clash over its wider message and meaning.

Is it an assertion of India’s Hindu identity if the country’s vice president appears on the same podium as the head of the RSS, a Hindu nationalist organisation? Should the Indian state and its machinery be deployed to further the cause?

One can’t help but imagine the outrage if a Muslim vice president of India had dared accept an invitation abroad for, say, a hypothetical World Muslim Congress.

The Indian state’s secular DNA mandates the government to stay above religious divisions. Even the perception that it might have strayed for whatever reason is damaging.

The organisers are at pains to say Naidu will speak on Sunday when the WHC would technically be over and he would be marking the 125th anniversary of Swami Vivekananda’s address, in 1893, to the World Parliament of Religions.

But the Ministry of External Affairs has made no such distinction in its announcement. Its website says the “Vice President of India will visit the United States of America on 8-9 September to deliver an address at the 2nd World Hindu Conference being held in Chicago.”

Naidu’s appearance hasn’t raised many questions so far, but Tulsi Gabbard, who identifies herself as the first Hindu member of the US Congress, has backed out. She decided the radioactivity around the September 7-9 World Hindu Congress (WHC) in Chicago wouldn’t burnish her credentials.

US Congresswoman Tulsi Gabbar has pulled out of the WHC citing ‘ethical concerns’. Credit: Reuters

But Chicago proved to be a bridge too far. Gabbard backed out in April as WHC organisers went about collecting their slate of speakers and it became clear it was becoming “a platform for partisan politics” with a significant number of political stars of a certain hue.

She cited “ethical concerns and problems” arising from her participation in a “partisan Indian political event in America.” She issued another statement this week because she was still being shown as a “chairperson” of the event and the initial video she made for the WHC in 2017 was being circulated.

Abhay Asthana, one of the coordinators of the WHC, told this correspondent “she [Gabbard] was very excited (to attend) when we spoke to her last year.” But she apparently changed her mind based on “partial information” about who was coming or not coming.

When asked which particular speaker – Bhagwat or Dattatreya Hosabale, RSS joint general secretary or Ashok Chowgule, working president of the Vishwa Hindu Parishad (VHP)’s external wing – might have spooked Gabbard, Asthana said he couldn’t tell. “We have moved on.”

That they have, with band, baja and baraat, even naming a hall in the Westin Hotel where the event is being held as the “Ashok Singhal Hall” after the VHP leader who arguably did tremendous damage to Hindu-Muslim relations. He once called the 2002 Gujarat anti-Muslim violence “a successful experiment” and saw secularism as a “drug” to keep Hindus unconscious.

He painted the WHC as an “ideas” fest rather than an effort at Hindu revival. But looking at the list of speakers, it is clear the idea is to promote Hinduism and Hindutva. 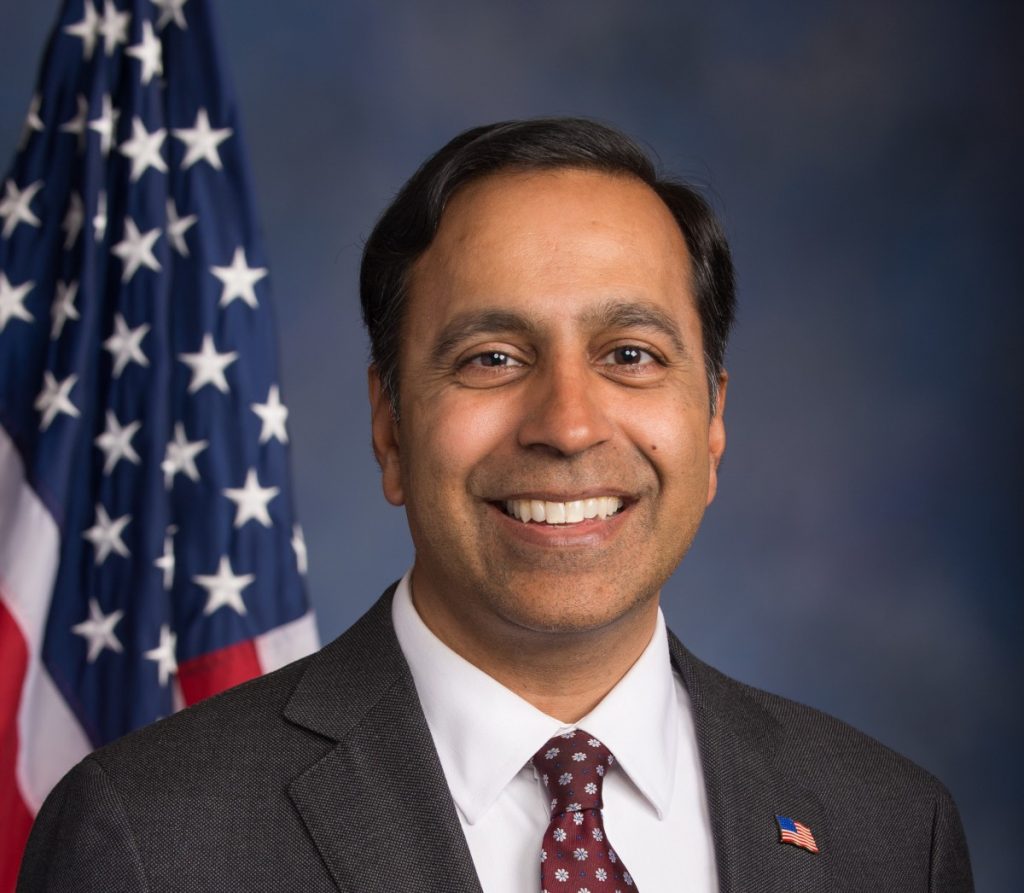 Raja Krishnamoorthy is one of the few US politicians to attend the WHC. Credit: krishnamoorthi.house.gov

One of the few US politicians to attend is Raja Krishnamoorthi, an Indian-American Congressman from Illinois. The Chicago suburb, where the WHC is being held, falls within his Congressional district, and observers say he probably can’t afford to alienate the many Hindu voters who will be at the conference.

Krishnamoorthi is a jovial, first-time Congressman and one of the five Indian Americans elected in 2016. He is a practising Hindu and an admirer of Prime Minister Narendra Modi even as he opposes similar policies by President Donald Trump with daily vigour on Twitter.

The hard-working Krishnamoorthi doesn’t appear to hold hardline views on Hinduism, but choosing to appear at a conference where VHP and RSS bosses will speak may create its own kind of baggage down the line.

The list of speakers is filled with Hindutva militants, activists and defenders who probably won’t be speaking in the tone of Swami Vivekananda who spoke of tolerance and accepting “all religions as true.”

Rajiv Malhotra, a panelist on “education,” is a Twitter activist who is also known as the “Ayn Rand of Internet Hindutva.” He sparks controversy on a regular basis – he has been accused of plagiarism and worse. In 2015, Richard Fox Young, a professor of the history of religions, accused Malhotra of using texts and ideas without acknowledgment in at least seven cases.

To have him speak as an “educationist” is ironical.

Malhotra’s most recent outrageous comment was about how people should donate only to help Kerala Hindus when the massive floods hit the state. By implication, Kerala Christians and Muslims should be left to their fate because global Christian and Muslim NGOs were “raising lots of money to help” their people and agendas.

Koenraad Elst, a Belgian Indologist and Hindutva supporter, is also scheduled to speak at the WHC. Elst wants to revive the “Hindu mind” because, according to him, Islam and Christian ideologies neutralised it over millennia. He was an early supporter of Malhotra’s Internet wars.

Perhaps, one of the most controversial speakers whose presence may have been the last straw for Congresswoman Gabbard is Sankrant Sanu, described on the WHC website as an entrepreneur, writer and researcher – all terms that can stretch to fit any profile or non-activity. A search revealed a video Sanu made where he calls himself an Art of Living instructor.

Sanu’s recent claim to notoriety – or fame among supporters – involves his description of the critics of RSS relief work in Kerala as “insects” and “cockroaches” filled with “Hindu hate.”

The background of many lesser-known speakers was highlighted by the Alliance for Justice and Accountability (AJA), an umbrella organisation of progressive groups across the US. The group believes the WHC is an attempt to mainstream “Hindu fascist ideologies” on the global stage.

The group has generated enough pressure that besides Gabbard, a couple of state-level politicians have reportedly pulled out. AJA now wants key sponsors such as Walmart and Fedex to withdraw support.

BJP ministers, including Nitin Gadkari, who earlier had agreed to speak at the conference, have already pulled out, according to a report in the Sunday Guardian, given the controversies surrounding the WHC.

AJA says the WHC is being “organised by the same forces that have incited and condoned the brutal suppression of human rights and religious freedom in India.” Its organisers have “existential links to VHP and the extended family of Hindu nationalist organisations from the Sangh parivar.”

Hindutva activists dismiss the critics as a cabal of leftist, disgruntled elements operating with cutouts. The latest term used by some of the invited speakers on Twitter to describe critics is “urban naxals” – the new brush to tar anyone who dares raise issues, among others, of human protection over cow protection.

Given the extreme polarisation between Hindu Americans and Muslim Americans in the US since Modi’s election in India, it is hard to imagine how the WHC will be a unifying force. But then it is not trying to bring together all Indian origin people, only the Hindus.

In addition, the lines between ‘upper’ caste Hindus and Dalits have become sharper as certain organisations fighting to “correct” the narrative about Hindus in US textbooks are dominated by upper castes. These groups want to present a picture of India without the oppressive caste structure.

The AJA is launching a series of protests over the coming days to highlight concerns of marginalised communities, especially its strong opposition to Rajamoorthi’s participation.

Ashwin Khobragade of the AJA says, “Whether it’s lawmakers or corporations, attending this event is profiteering at the expense of every Dalit, Sikh, Buddhist, Muslim and Christian that has faced religious violence at the hands of Hindutva.”

And herein lies the changed nature of today’s diaspora politics.