What Will the Russian Economy, Hammered by Western Sanctions, Look Like in the Weeks Ahead?

For sanctions against Russia to be effective, they need to be more comprehensive in scope and timeline. 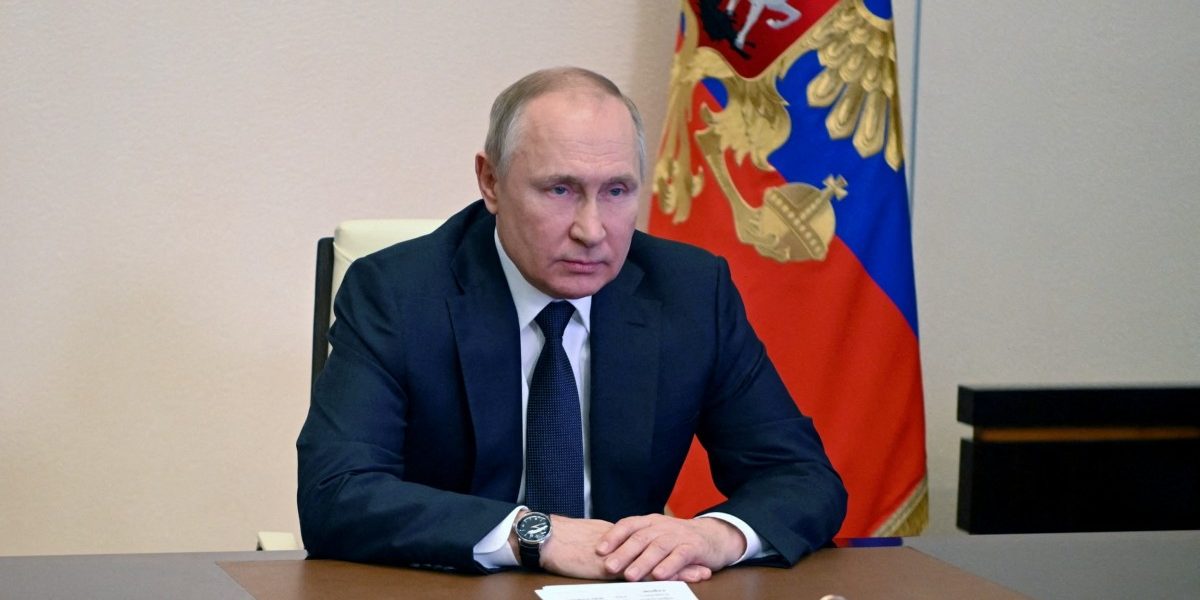 Russian President Vladimir Putin chairs a meeting with members of the Security Council via a video link at the Novo-Ogaryovo state residence outside Moscow, Russia March 3, 2022. Photo: Sputnik/Andrey Gorshkov/Kremlin via REUTERS

The US and its European allies have tried to impose tough sanctions on the Russian economy in response to its continued military aggression in Ukraine.

It started by freezing $630 billion of its foreign currency reserves. Some capital controls were imposed, restricting movement of planned investments from one nation to another (into-outside Russia), including blocking citizens from depositing money into foreign accounts. Russia has also been shut from the SWIFTS payment system, its central bank foreign assets frozen, which makes its isolation from the global financial system more severe.

The short-term effects of these sanctions can be seen already.

They have so far crippled the Russian economy – whose currency has been in a free-fall (ruble fell over 30%), stock market is crashing, rate of inflation is rising. On top of this, central bank interest rates have been increased from 9.5% to 20% (for taming inflation and increasing the cost of borrowing), and the government (external) debt to GDP ratio is rising. There is a strong likelihood of the Russian economy proceeding towards a default which will send seismic waves across the global financial system.

Given this war could be a long-drawn affair, understanding the impact of the increased number of sanctions on the Russian economy is critical. Long-term sanctions turn a relatively open economy into a closed one. As an economy becomes relatively closed or restricted in its ability to freely process foreign transactions, the value of its currency declines, leading to higher inflation. In a war-like situation, a nation’s production capacity and patterns also shifts – changing the volume of investment, affecting growth prospects.

Most literature studying the effectiveness of sanctions, based on recent historical past, suggests that a sanctioning regime (say, US and EU allies in this) has limited chances of success over the longer term if the targeted state (Russia) is strong, politically, and economically stable, hostile, and autocratic.

It has been also found that sanctions are more likely to be effective, or have more of an impact, when they are implemented through an international or multilateral organisation such as the United Nations.

The flip side is also true; where sanctions change the behavior of a sanctioned economy, who can turn to new partners for trade-investment relationships. We already see Russia cozying up to China now, expressing a need for arms/military support. And China’s role- depending on how it chooses to support Russia-in context to market access, military assistance and technological support- is critical in determining how effective Western sanctions would be on the Russian economy. The increase in Western sanctions can also make sanctioned countries to turn inward and develop their own industries in order to become self-sufficient (Russia, for example, has been boasting about its “import substitution” policy since 2014).

Some might argue: Didn’t Putin see all this coming? Given what he was planning to do -by attacking Ukraine, he would have known about what sanctions can do to the Russian economy? Or, did he ‘mis-calculate’ by assuming the global financial response to his aggression in Ukraine to be like the scenario seen post-Crimea 2014 annexation (which was far weaker and less well-coordinated)?

But this time may be different from the past. The global financial and monetary system too is quite different from the past too. Yes, the dollar is still the dominant foreign reserve currency, but it doesn’t have the same hegemonic role as it did a decade back or more. Chinese government and Chinese money will surely play a more critical role in assisting Russia in its financial obligations, but we don’t know to what extent. Russia has already sought support from the Chinese for military assistance in its war in Ukraine.

The political economy implications of sanctions on Russia can be more catastrophic. There might not be any pipeline deals with Russia. The Nord Stream pipeline plan is already in jeopardy. There won’t be much foreign direct investment in/out of Russia – after all, who would want to invest a long-term financial commitment in a country whose leadership is autocratic and has shown a reckless contempt for its own rule of law.

For sanctions against Russia to be effective, they also need to be more comprehensive in scope and timeline. So far, direct sanctions on Russian exports of oil and gas (from where bulk of their revenue is sources) have been limited. Most exports still continue to Europe.

What about the wealth of Russian oligarchs?

Economists Filip Novokmet, Thomas Piketty and Gabriel Zucman have pointed out that Russia has run huge trade surpluses every year since the early 1990s, which should have led to a large accumulation of overseas assets. Yet, official statistics show Russia with only moderately more assets than liabilities abroad. The obvious explanation to this is that wealthy Russians have been skimming off large sums and parking them abroad. The sums involved are mind-boggling.

Novokmet et al. estimate that in 2015 the hidden foreign wealth of rich Russians amounted to around 85% of Russia’s GDP. Another paper co-written by Zucman found that in Russia, ‘the vast majority of wealth at the top is held offshore.’ As far as one can tell, the overseas exposure of Russia’s elite has no precedent in history – and it creates a huge vulnerability that the West can exploit.”

The question is whether democratic governments across the world can collectively align against Russian oligarchs and would this in any way lead to the containing of the conflict or reduce Putin’s aggression. So far it hasn’t worked in changing Putin’s course of action. It is also difficult to ‘bully a bully’.

Sanctions can also have an undesirable effect on civil society in the targeted state; this is the phenomenon of rallying around the flag. In some cases, if civil society feels that its country should not be placed under sanctions, this can lead to a strengthening of national cohesion around power. This is what happened with Russian civil society in 2014 after the annexation of the Crimea and the ensuing Western sanctions.

This phenomenon can also take place in a completely different context: if people are too dependent on their leaders for food and basic necessities, civil society can rally behind its leaders because, as Andrei Kolesnikov, explains, “They’d better vote for the hand that feeds them or there might be nothing to eat at all.”

In any case, the need to drive sanctions through greater international cohesion, strategic deployment of measures in a comprehensive manner over a longer time span, will be key for the West to not allow Putin’s Russia to come on top in its war against Ukraine.