However, the victory of LDS leader Wavel Ramkalawan does not necessarily mean that India’s Assumption island project will get a green signal as his party had opposed the deal two years ago.

New Delhi: Indian-origin opposition candidate Wavel Ramkalawan, whose great grandfather was an indentured labourer from Bihar, has won Seychelles’ presidential election with a solid majority. Hi victory marks the first time that ruling United Seychelles party has been swept out of power since the archipelago became independent in 1977.

More than 88% of the eligible 74,634 eligible voters cast their votes in the three days of polling in Seychelles.

On Sunday morning, Electoral Commission chairman Danny Lucas declared that Ramkalawan, of the opposition Linyon Demokratik Seselwa (LDS), had won with 54.9% of the valid votes counted. He defeated Danny Faure by 7,384 votes, which was around 10% of the electorate. The third candidate, Alain St Ange of One Seychelles party got just 1.6% of the total valid votes.

LDS also won a thumping majority in the parliament with 25 seats, while United Seychelles got 10. Voters queue at a polling station to cast their ballots during the presidential and parliamentary elections in Victoria, English River, Seychelles, October 22, 2020. Photo: Reuters/Herbert Labrosse

Prime Minister Narendra Modi congratulated Ramkalawan on his ‘historic’ win and said he looks forward to strengthening the ‘close and traditional’ relationship between India and Seychelles.

Felicitations to H.E. @wavelramkalawan on his historic win in the Presidential and Assembly elections in Seychelles. We look forward to a strengthening of the close and traditional relationship between India and Seychelles under his leadership

Before this election, Ramkalawan, an Anglican priest, had five failed bids under his belt. According to most observers, anti-incumbency was the key factor as United Seychelles has not only been in power since independence, but they also won all polls since multi-party democracy was introduced in 1993.

While political change had been in the air, observers were more surprised by the margin of victory. Not only has Ramkalawan won by a large margin, but his party also got big mandates in the parliamentary polls. This time, Seychelles also elected an Indian-origin candidate, Sathya Naidu, to parliament.

Seychelles was ruled by France-Albert René from 1977 to 2004. When he stepped down, he handed over power to Vice President James Michel, who won two presidential polls in 2006, 2011 and 2015. After defeating Ramkalawan by just 198 votes in 2015, Michel handed over power to Danny Faure a year later.

All these years, United Seychelles had been at the helm under various names as it had been rebranded several times.

While Ramkalawan had narrowly lost the 2015 presidential elections, the LDS wrested the 33-member National Assembly from the ruling party for the first time in 2016.

Therefore, despite the literal definition of his formal designation, Ramkalawan is the leader of the majority of the members in the parliament. Seychelles has a presidential form of government, but parliament has significant powers of oversight.

Therefore, when he visited India in 2018 as Seychelles leader of opposition, he actually had a powerful role as the head of the parliamentary majority despite the country having a presidential form of government.

During his visit in 2018, he had spoken to The Wire about the search for his ancestors which led him to trace his ancestry to a village in Bihar.

He claimed that his ancestors had first gone from Bihar to Mauritius and then travelled to Seychelles. 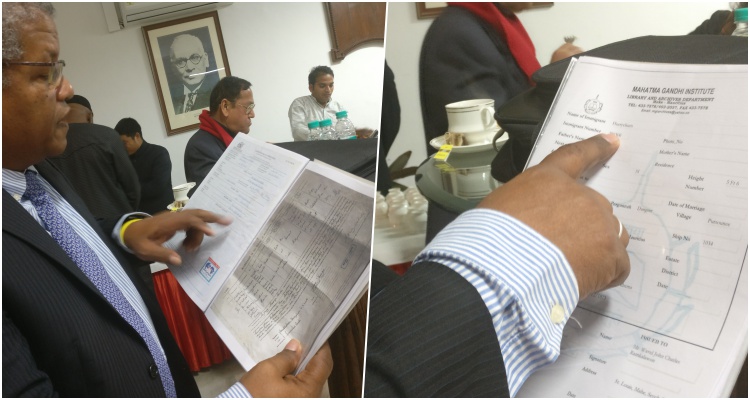 In a speech in India, Ramkalawan noted that his ancestor left the village in Bihar in 1883 and first went to Patna. From there, he took to a train to Calcutta and travelled on a 12-week sea voyage to Mauritius to work in a sugarcane plantation.

When his great-grandfather died, his widow and two sons travelled to Seychelles, where they settled down.

With its strategic location, Seychelles has been a critical part of India’s Indian Ocean policy. In 1986, Francis Albert Rene had rushed back home on “Air India One” when news broke of a possible coup d’etat. Even after democracy officially dawned, India has maintained close ties with Seychelles, providing training and equipment for its defence forces.

The most ambitious project that India had proposed in Seychelles was to sponsor a naval facility at Assumption Island. The agreement was first signed in 2015 during the visit of Prime Minister Narendra Modi, with a revised text again initialled in 2018.

During his India visit in January 2018, Ramkalawan had supported the Indian project, which would have required ratification from parliament. However, the opposition began criticising the deal and indicated that it would not ratify the agreement with India. The classified text of the agreement was also leaked in March 2018 through a social media account, first reported by The Wire.

Also read: Why Seychelles Has Been ‘Very Slow’ in Removing Hurdles for India’s Assumption Island Project

At the second presidential debate in the run-up to the elections, the three candidates were asked about Seychelles’ policy in relation to China and India, especially on their activities in the Indian ocean.

As per the Nation newspaper, Ramkalawan answered that there will never be a foreign military base in Seychelles. “That is why LDS brought a full stop to the Assomption agreement between Seychelles and India,” he said at the debate on October 16.

He said that Seychelles should be able to identify and fight threats such as illegal fishing and drug trafficking – and only seek help of foreign powers when it needs assistance. “Seychelles is surrounded by friendly countries, they can help us but our sovereignty is sacred,” he stated.

While LDS has won both the presidential and parliamentary elections, it is not clear that it will mean that India’s proposal for jointly developing a coast-guard facility in Assumption island will get a green signal in the near future. With Ramkalawan having opposed the deal for the last two years, it will certainly not be easy for him to change his mind on this project.

However, the new president may be more amenable to having closer economic ties with India.

In an interview to Seychelles News Agency, he suggested that high prices of everyday items could be brought down by directly importing from India.

“Why do commodities have to go through Dubai? They get most of their commodities from India. What we are proposing is to import directly from India. We would like to have direct links with producers. And this is where the role of STC needs to be reviewed. As a company, STC will be importing commodities on board the cargo vessel and we can negotiate with India to link us with different markets directly,” he said.

Indian sources also noted that there was a possibility to negotiate direct cargo ferry services with Seychelles to send essential commodities on a priority basis.