How Trump Supporters Stormed the US Capitol: A Timeline of Events

From a rally meant to incite supporters to a pro-Trump mob storming into the seat of US democracy, January 6 saw events that strike at the very core of US political life. 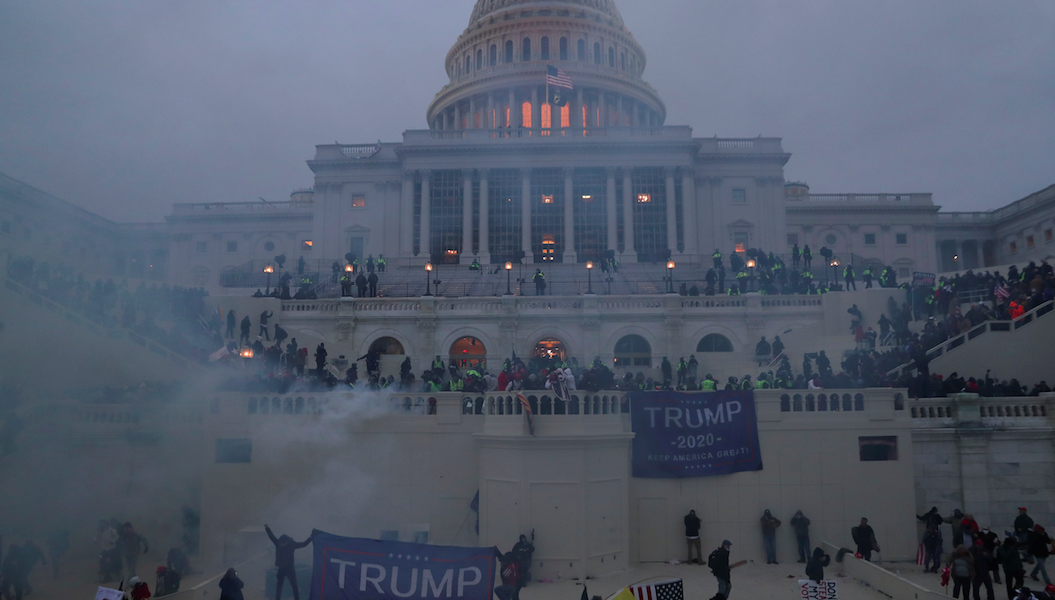 With the help of inputs by agencies like Reuters and Associated Press and media outlets like USA Today, LA Times, The Independent, and Politico, The Wire has established a timeline of the storming. Note that Washington D.C. follows Eastern Standard Time, which is 10 hours and 30 minutes behind IST.

Crowds begin to gather at The Ellipse, a 52-acre park south of the White House. They are responding to Donald Trump’s December 19 tweet, urging people to “be there, be wild” on January 6.

Peter Navarro releases 36-page report alleging election fraud ‘more than sufficient’ to swing victory to Trump https://t.co/D8KrMHnFdK. A great report by Peter. Statistically impossible to have lost the 2020 Election. Big protest in D.C. on January 6th. Be there, will be wild!

The gathering, touted as a ‘Save America Rally’, has run into thousands.

Politco reported that a notable number of protesters “wore bullet-proof vests and helmets, flashlights attached to their brims, even at 10 am in broad daylight.”

Trump and his sons Eric and Donald Trump Junior are in attendance, as is his lawyer and former New York mayor Rudy Guiliani. All continue to claim that the elections were fraudulent.

Guiliani’s words are, “Over the next 10 days, we get to see the machines are crooked, the ballots are fraudulent. And if we’re wrong, we will be made fools of. But if we’re right, a lot of them will go to jail. So…let’s have trial by combat. I am willing to stake my reputation.”

Trump begins his speech, which by now is being considered an open act of incitement. It continues for an hour. He asks supporters to walk to the Capitol.

Trump also says that he expects US vice president Mike Pence – who will preside over the joint session of Congress as it formally counts the Electoral College results – to “come through” for them and do “the right thing.”

As the rally ends, his supporters take him up on his claim and walk to the Capitol. Trump withdraws to the White House.

Hundreds of Trump supporters have stormed the barricades at the back of the Capitol and are marching toward the building. pic.twitter.com/68nB7QyiP9

US Congress meets for the joint session in the House of Representatives hall.

A scuffle begins between Trump supporters and Capitol police.

Under threat of a siege, police orders evacuation of the Library of Congress, the Madison Building and Cannon House Office Building.

Muriel Bowser, the Washington D.C. mayor, orders a 12-hour curfew in the capital starting from 6 pm. Representatives tweet of their ordeal as evacuations are sped up.

I don’t recognize our country today and the members of Congress who have supported this anarchy do not deserve to represent their fellow Americans. (2/2)

While events such as a presidential inauguration involve detailed security plans by numerous security agencies, far less planning went into protecting the joint session of Congress that convened on Wednesday to ratify the results of the 2020 presidential election, officials said.

A dense group of protestors has shattered the windows of the Capitol. We can hear roaring chants of “USA” outside. pic.twitter.com/ky1vsckY2P

Vice-President Mike Pence is escorted out of the Senate chamber.

A few minutes later, Trump releases the first of his tweets that will earn him a temporary ban, “Mike Pence didn’t have the courage to do what should have been done to protect our Country and our Constitution, giving States a chance to certify a corrected set of facts, not the fraudulent or inaccurate ones which they were asked to previously certify. USA demands the truth!”

US politicians urge Trump to call for peace. He tweets the following.

Please support our Capitol Police and Law Enforcement. They are truly on the side of our Country. Stay peaceful!

Security initially was handled almost entirely alone by the US Capitol Police, a 2,000-member force under the control of Congress and dedicated to protecting the 126-acre Capitol Grounds. For reasons that remained unclear as of early Thursday, other arms of the US federal government’s vast security apparatus did not arrive in force for hours as rioters besieged the seat of Congress, reported Reuters.

The first shots are fired. In minutes, Trump supporters reach the Senate chamber and storm the dais. Representatives are rushed out and given survival kits in case of fires.

Videos are tweeted by several journalists and politicians of scuffles between security forces and rioters inside the Senate.

As hordes of rioters streamed into the heart of American government, they could be seen on camera roaming freely through the historic halls – swinging from a balcony, rifling through the offices of House Speaker Nancy Pelosi, and even sitting in the chair reserved for the Senate’s presiding officer.

One rioter was captured by a Reuters photographer casually shouldering a large Confederate battle flag as he strode inside the Capitol – a searingly evocative inversion of the failed 1861-1865 insurrection against the American republic by Southern states in an effort to perpetuate slavery.

I am asking for everyone at the U.S. Capitol to remain peaceful. No violence! Remember, WE are the Party of Law & Order – respect the Law and our great men and women in Blue. Thank you!

A woman is critically injured after receiving a bullet wound. Police later say she died.

More than two hours after the breach began, more than 1,000 personnel of the District of Columbia National Guard are mobilised to aid Capitol police.

In a speech, President-elect Joe Biden urges Trump to call for peace. “Our democracy is under unprecedented assault,” he says.

I call on President Trump to go on national television now to fulfill his oath and defend the Constitution by demanding an end to this siege.

Trump releases a video message on Twitter in which he says:

“I know your pain. I know you’re hurt. We had an election that was stolen from us. It was a landslide election and everyone knows it, especially the other side. But you have to go home now. We have to have peace. We have to have law and order. … So go home. We love you, you’re very special…I know how you feel. But go home and go home in peace.”

The electoral college certificates – ratifying Biden’s win – are being marched back to the Senate chamber. pic.twitter.com/uNte4GcF3S

Indian prime minister Narendra Modi says the events in Washington have distressed him.

Metropolitan Police Department Chief Robert J. Contee says 47 of the 52 arrests to date were related to violations of Mayor Muriel Bowser’s 6 pm curfew, with 26 of those involving people arrested on US Capitol grounds.

Several others were arrested on charges related to carrying unlicensed or prohibited firearms.

In addition, Contee said, two pipe bombs were recovered from the headquarters of the Republican and Democratic national committees, as well as a cooler from a vehicle on US Capitol grounds that contained Molotov cocktails.

White House deputy national security adviser Matt Pottinger has resigned, according to media reports, joining a number of officials who are leaving the administration of President Donald Trump in the wake of violence on Capitol Hill.

Pottinger, a leading figure in the development of Trump’s China policy, resigned on Wednesday in response to Trump’s reaction to a mob of protesters who breached the US Capitol, CNN reported, citing a person close to Pottinger. Bloomberg first reported the resignation.