Any sense that the relationship between the world's two nuclear-armed superpowers is predictable or bound by commonly-accepted rules has gone completely out the window.

Geopolitical tensions are spiking to levels seen only amid the worst Cold War crises. Credit: Reuters

Moscow: The mass tit-for-tat expulsion of diplomats and consular closures between Russia and 26 Western countries over the past two weeks is the most acrimonious crisis of its kind ever – in some ways eclipsing even the worst moments of the old Cold War.

About 150 Russian diplomats have been kicked out of most, but not all, NATO-affiliated countries amid searing rhetoric and with some astoundingly impolitic accusations flying back and forth. The poisoning of former Russian intelligence officer Sergei Skripal and his now-recovering daughter Yulia almost a month ago in the English cathedral city of Salisbury, attributed to Russia, was the declared cause of all this diplomatic tumult.

However, with hard evidence pointing to Kremlin guilt still lacking, it seems more an expression of accumulated Western frustrations with a variety of Russian behaviours over recent years, as a power point briefing summarising London’s argument shown by the British ambassador to Moscow in a meeting with his colleagues on March 22, and obtained by the newspaper Kommersant, makes all too clear.

Though many US-allied countries expelled small, even perhaps symbolic, numbers of Russians, Washington surprised everyone by throwing out 60 Moscow diplomats – the largest number in history – and closing the Russian consulate in Seattle.

Russian retaliation was delayed by the country’s angry and grief-stricken preoccupation with a Siberian mall fire that killed over 60 people, including many children. But it arrived by the week’s end in the form of eviction notices for 60 US diplomats and closure of the US consulate in St. Petersburg.

The Russians, who tend to be quite punctilious in these matters, will certainly deal tit-for-tat retaliation to all the other involved states over the coming days. They may also escalate by closing non-diplomatic US offices in Russia, as they did amid mutual expulsions with Britain a week earlier, by shutting down the culturally-oriented British Council’s operations in Russia.

It’s something of a mystery to longtime Russia-watchers why all this is even happening. After all, the Cold War has been over for a quarter century. The former Soviet Union was a superpower that occupied half of Europe, fought proxy wars with the US in such far-flung places as Vietnam and Nicaragua, maintained a vast global propaganda apparatus and projected a powerful ideology that was genuinely subversive to capitalist-oriented Western civilisation.

Today’s Russia is a pale shadow of the former USSR; the only ideology wafting out of the Kremlin these days is, perhaps, traditional Russian Orthodox Christian values. Most former Soviet allies today belong to NATO, and Russian military adventurism is limited to assisting Ukrainian rebels abutting Russia’s own border and supporting a long-time Moscow client in Syria.

Yet, geopolitical tensions are spiking to levels seen only amid the worst Cold War crises, some of the rhetoric being flung back-and-forth sounds positively unhinged and the damage that has been done to the very infrastructure of diplomatic relations, particularly between the US and Russia, by serial expulsions over the past year, means that all forms of official communication have been badly crippled.

“This is definitely a new stage in the US-Russia confrontation, and it looks likely to be an open-ended one,” says Andrey Kortunov, director of the semi-official Russian International Affairs Council. “Given the sheer scale of the expulsions from the US, it might incapacitate Russian diplomatic activity altogether. There is a big Russian community out on the west coast of the US, who will now find it hard to get the simplest consular services.”

Another ominous note is the White House’s insistence that the 60 Russian diplomats were removed for national security reasons because they are spies. In a videotaped press statement, US ambassador Jon Huntsman said the expulsions “make the United States a safer place by limiting the ability of Russia to spy on Americans, and conduct covert activities that threaten America’s national security.”

Statement by Ambassador Huntsman on the expulsion of Russian intelligence officers: pic.twitter.com/RvMzCbPzZu

Most US allies downplayed the espionage aspect of the expulsions and one, New Zealand, declined to participate at all on grounds it couldn’t find any Russian spies.

While every embassy on Earth probably houses some undercover intelligence agents, and they do tend to get specially targeted amid diplomatic expulsions, the US insistence that they are all spies is a new and dangerous tone. It’s not even clear why the charge needed to be made if the point of the expulsions was to punish the Russian government for the Skripal poisoning? The public impact in the US will be to demonise any kind of Russian diplomatic activity in future.

Although Moscow refrained from explicit spy talk in announcing its retaliation, Russian political culture has always been more receptive to the idea that all foreigners are spies. There will be an inevitable chilling effect on the extensive community outreach efforts promoted by successive US ambassadors in Russia, and ordinary Russians – who, until recently, mixed relatively freely with US diplomats – may now find themselves at risk for having such contacts.

The mood of the Russian public, once quite pro-American, seems set to take another dark anti-Western turn. Analysts say that average Russians would be horrified by proof that their leaders could authorise a nerve gas attack, such as the alleged attempted murder of Skripal, on foreign soil. But in the absence of proof or even clear evidence, they tend to believe the Kremlin’s denials and see Western claims as unprovoked insults and blind anti-Russian hostility.

“So far there is no suspect, no clear picture of how the crime unfolded and no motive,” being offered by the British government in the Skripal case, says Fyodor Lukyanov, editor of Russia in Global Affairs, a leading Moscow-based foreign policy journal. “Yet political blame came swiftly, and punishment followed shortly thereafter. It almost doesn’t matter what evidence eventually emerges, the lines have already been drawn. Everyone is already trapped by their own narrative. So, of course, Russians will consolidate behind the Kremlin more than ever.”

Russian denials have been emotional, but not very convincing to Western ears. The Russians muddied the waters by denying that Russia, or the USSR, ever had a nerve agent programme called “Novichok,” the name being used by the British to identify the poison used against the Skripals; it later emerged that the Soviet programme that developed that family of nerve agents was called “Foliant.” Some Russian officials have suggested that British secret services may have committed the crime themselves. Foreign ministry spokesperson Maria Zakharova, who sometimes overworks the device of mockery, posted a relevant clip from the old British political serial ‘Yes Prime Minister’ on her Facebook page.

Yet, it also appears undeniable that London has not, or at least not yet, proven its case. The police investigation is far from over. It seems clear that, although “Novichoks” were developed in the USSR, the knowledge of how to make them has since spread far and wide.

The list of Western grievances against Russia, enumerated in that British power point presentation, include actions that the Kremlin would regard as strategic necessities, such as the 2008 “invasion of Georgia,” the 2014 annexation of Crimea, ongoing support for anti-Kiev Ukrainian rebels and military intervention in Syria. But it also cites actions that would seem counterproductive to Kremlin interests, such as the 2014 shooting down of the Malaysian airliner MH-17 over eastern Ukraine, almost certainly carried out by Ukrainian rebels using a captured BUK anti-aircraft missile. 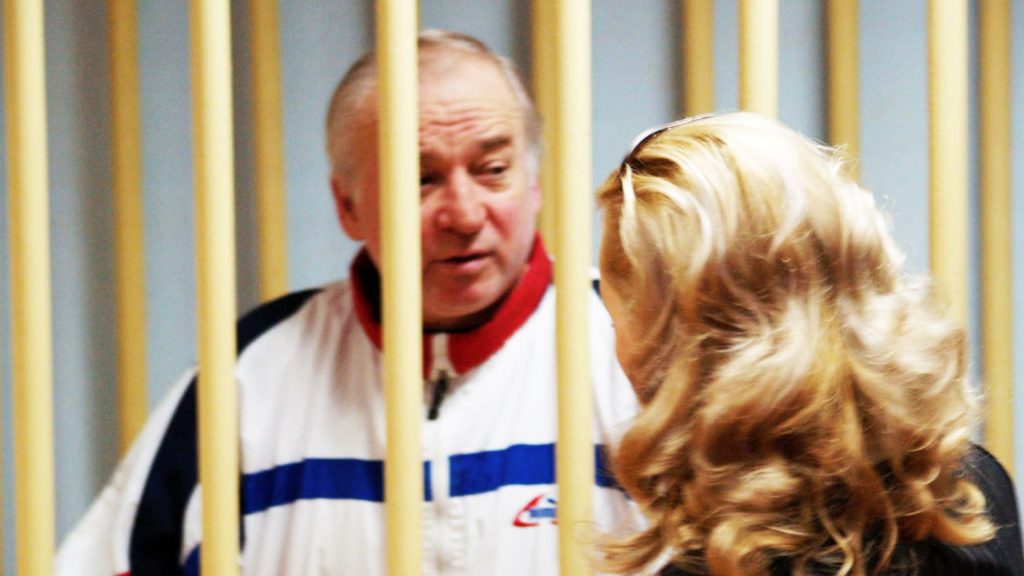 The attempted murder of Skripal and his daughter falls into the latter category. Besides inflicting a terrible public relations black eye on Moscow, it also goes against rules of spycraft that the former KGB and Russian security forces have adhered to for decades.
Skripal was a career officer of Soviet military intelligence which, like present-day day Russian incarnation, is known as the GRU, or main intelligence directorate.

In 1995, he was recruited by the British secret service MI6, and reportedly handed over details of up to 300 Russian agents working abroad. He was caught in 2004, pleaded guilty, and in 2006 was sentenced to 13 years in a labour camp for treason. But four years later he was freed, pardoned by then-Russian President Dmitry Medvedev and, along with three other convicted Russian spies, traded for ten Russian “sleeper agents” caught in the US in a classic Cold War-style spy swap.

“There has never been any case in the past when agents [who’ve been traded in this way] have been killed or harmed,” says Alexei Kondaurov, a former KGB general who later served several years as a deputy of the Russian State Duma. He says he doubts that Russian security services would tear up that old rule book, which benefits them as much as the other side.

“If Moscow is accused of the Skripal story, I see no rational motivation for it,” he says. “Skripal didn’t possess any useful information any more. Sure, he held classes on secret service methods [in Britain], but this stuff is as old as the Pharaohs…”

“Some people say maybe it was done to intimidate other [traitors] but I doubt that could work. More likely it will have the opposite effect,” he adds.

The crisis seems set to escalate in coming weeks. But even if diplomacy between the world’s two nuclear-armed superpowers breaks down completely, there remain a few dwindling channels of communication. Russian and US military establishments appear to be still coordinating effectively in Syria. The controversial visit of three Russian intelligence chiefs to Washington earlier this year suggests that those people are still able to talk to one another about common challenges like terrorism. And the fraying nuclear arms control regime has its own apparatus for verification and dispute resolution that continues to function.

However, any sense that the relationship is predictable or bound by commonly-accepted rules has gone completely out the window.
“All our understandings about US politics have been shattered,” says Kortunov of the foreign ministry-connected Russian International Affairs Council.

“We were used to the idea that Russia would be a football in American elections, with candidates competing to talk tough about us. Then, after the election, there would be a summit with the new president, and some new affirmation of the relationship would emerge. But Trump was different from the start. And now it looks like Russia is such a toxic asset for him that he cannot afford to do anything that looks like a concession to us. Only a strong president can afford to build a positive relationship with Russia, and he is not able.”

“It seems possible that this sweeping expulsion was an emotional decision by Trump. He felt he needed to demonstrate his anti-Russia credentials, and he did this. But the consequences will be with us for a long time.”