Even limited reform on inequality matters to the country now, as does the development of new forces opposed to America’s imperial war machine. 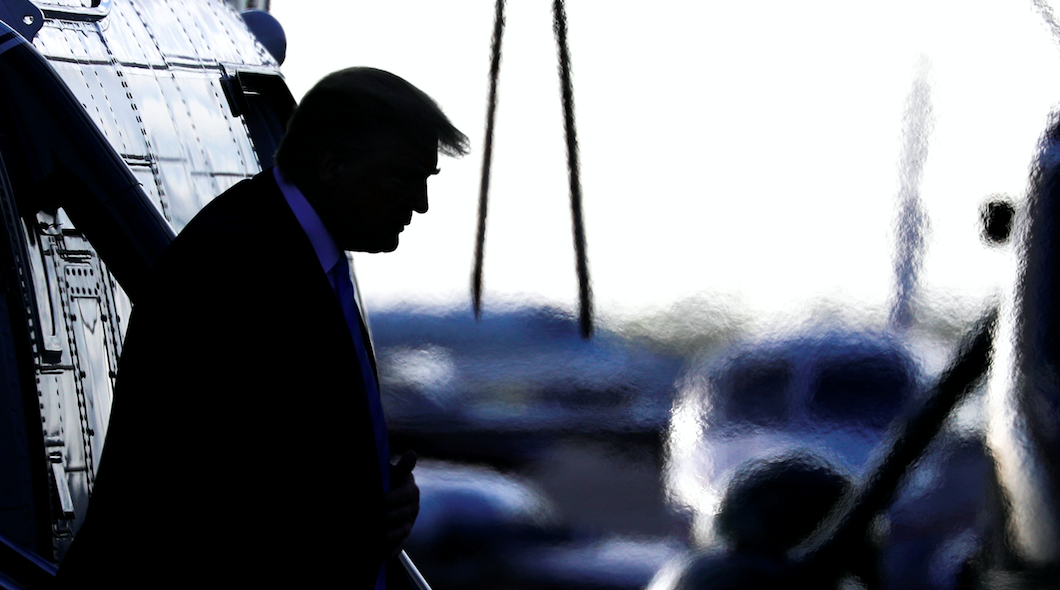 US President Donald Trump descends from Marine One at Miami Executive Airport in Miami, Florida ahead of an evangelical speaking event, January 3, 2020. Photo: Reuters/Tom Brenner

The ‘big picture’ and prospects for US politics in 2020 remain similar to the previous three years, but represent the culmination of the totality of the post-2016 experience: political turbulence, tension, social fractures, polarisation and division…but also the strengthening of socialistic tendencies in public opinion and in the Congress.

Rising geopolitical tensions – in the Middle East and north Africa, Far East, in Central Europe, in Latin America, a new nuclear arms race focused on hypersonic missiles with Russia and China, tensions over China’s rising economic muscle and self-confidence – provide opportunities for Trump personal agendas as well as for ramping up military spending to record levels.

The targeted killing of Iran’s General Qassem Soleimani by US drones ratchets up tensions and the threat of another regional war with global implications, just following the recent first-ever Iran, China and Russian naval exercises in the Gulf.

With Iran threatening reprisals, and President Trump claiming the assassination was not a move to all out war, and the approaching November presidential election, the chances are that the danger of an all out war will not be realised until after November 2020.

Yet, there remains hope in the face of those threatening tensions in the form of the Quincy Institute for Responsible Statecraft (QI), a mainly Charles Koch-George Soros-funded think tank that unifies left and conservative realists opposed to US militarism and unnecessary ‘endless wars’ fuelled by ‘liberal hegemony’.

Less well known, but potentially-significant nevertheless, is the Security Policy Reform Institute (SPRI) that aims to develop a fresh new foreign policy based on US working class interests.

We are now moving to another major decision point in US politics – not just a battle over America’s ‘soul’ as so many representatives of the broader status quo call it. The big decision at hand is over whether or not Americans want to continue post-9/11, Trump-intensified, inequality and authoritarianism at home coupled with militarism and war abroad.

Viewed through such lenses the fault-lines in US party politics realign the major candidates. Joseph Biden and Pete Buttigieg align with one another as well as closer to mainstream traditional Republicans: steeped in Big Money politics and attendant political agendas (plus affluent-voter-oriented identity politics), and liberal interventionism abroad. Their programme necessitates corporate power, hard borders, increased state power over civilian life, and a continued strategy of global militarism and war. 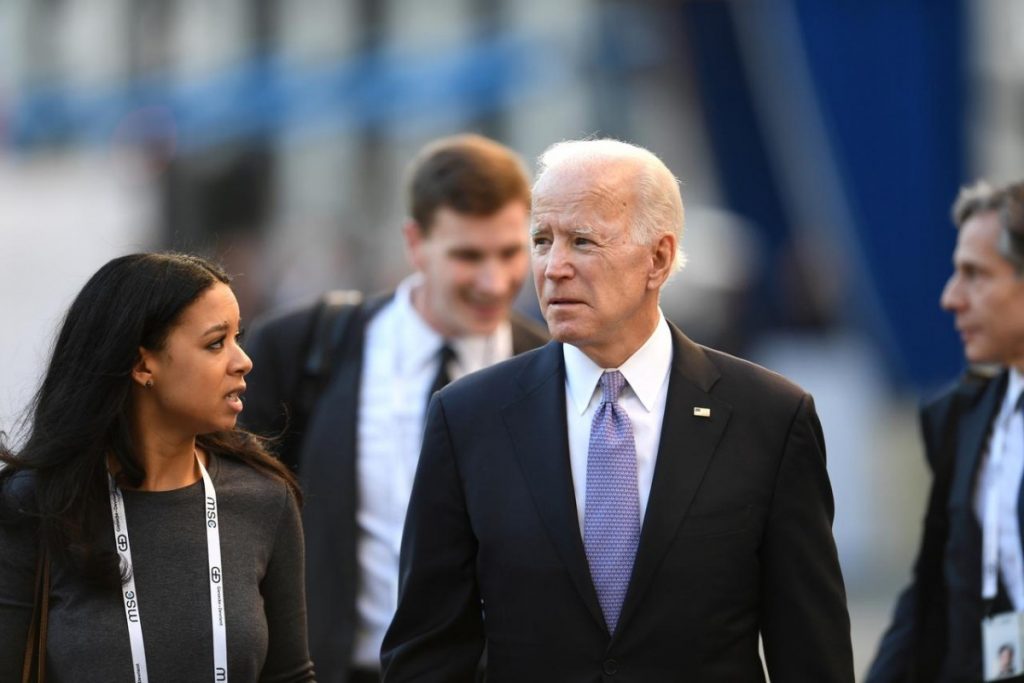 The Bernie Sanders-Elizabeth Warren pole represents a position that approximates regulated market capitalism with higher corporate taxes, greater social spending and deep scepticism over record-level military budgets. The Sanders-Warren-Squad (Alexandria Ocasio-Cortez et al) programme is conventionally referred to as ‘socialism’ by many of its adherents but particularly by its GOP and DNC opponents.

President Trump’s Council of Economic Advisers call it a spectre haunting the US, two centuries after the death in 2018 of Karl Marx.

Those are the major political fault-lines that appeared even in the political rhetoric of candidate Trump’s 2016 campaign – the placing at the centre of his programme the American worker as opposed to Wall Street and liberal elites who had ‘sold out’ to foreign interests. And a pledge to reduce American military interventions abroad – now referred to as ‘forever wars’.

Underpinning the fault-lines referred to above is an America whose social and economic contours betray deep inequalities even as stocks and share prices break all records: that the wealth and income of America is skewed towards the 1%, or more accurately, within the 0.1%.

The 99% are the part of the American population iceberg beneath the surface, that underpins its elite-based party politics. The pacification and mobilisation of the 99% during electoral cycles is the principal problem of the party system, and the main cause of its current and recent legitimacy crisis or crisis of authority.

The resulting politics has polarised America to the extent that elements of the party and governmental system connect at all with popular opinion and problems: authoritarian-populism from the right against predominantly melting pot Americanism from the Democrats.

Each position seeks to suppress the politics of class and income and wealth redistribution. Identity politics appears to be the principal strategy to that end, eliding the corporate domination of both political parties’ agendas.

The real sense of hope in 2020 is due to the rise of socialist beliefs across US society to which the CEA report on socialism is a significant response. Other surveys show the broad leftward shift in the US, especially among millennials.

The year 2019 saw the highest number of working days lost to strike action in over 40 years: at least 500,000 workers striked in 2019 across a range of sectors including schools, autos, hospitals, and delivery services.

There is an upsurge in worker-employer conflict in part driven by a tighter labour market and partly by the sheer disparity in rewards of corporate CEOs and their workers, and falling real wages.

The very rise of the socialist ‘squad’ (AOC, Rasha Tlaib, Ilhan Omar, etc.) reflects the crises of US established elites at home and the crisis of US power in a changing world (with the Iraq war, Guantanamo, Libya, refugee crisis, the 2008 great crash and recession, and galloping social inequality).

The ‘Tea Party’ movement, nurtured and funded by the billionaire Koch brothers, and the ‘Occupy Wall Street’ initiatives prefigured the class politics of 2016 and of today, as did the Trump-Fox News-promoted racist ‘birther’ phenomenon.

At the same time, US electors crave a return to pre-Trump ‘normalcy’, a tendency favoured by the DNC, Joseph Biden et al. Remove Trump and return to business as usual, an understandable position given the hated and exhausting politics, policies and rhetoric against immigrants, minorities, political opponents and workers, and in favour of corporations, of the Trump machine.

Also read: Behind the Paeans to McCain, a Lament Over New Tactics of Hegemony

But that desire for normalcy bumps up against a desperate desire for change as reflected in 2016 and in a plethora of attitude surveys, usually the same ones that suggest Democrats favour a white, middle aged, moderate male candidate for November 2020.

There is a distinct schizophrenia in the anti-Trump camp which plays into the hands of the broad status quo groups comprising the DNC and the Trump-dominated GOP. As the dynamics of the Trump impeachment and removal process play out in hyper-traditional political theatrics in Washington, DC, popular attitudes display little real interest.

The main aim of the proceedings, after all, was and remains the political containment of anti-Trump popular revulsion. The Democratic leadership has so narrowly focused impeachment articles as to exclude major constitutional violations regarding spending decisions on the border wall, open courting and espousal of white supremacist positions, redeploying Pentagon budgets for southern border duties including construction of effective concentration camps. The human rights violations on the border are in direct contravention of US and international law, yet none of those matters feature at all in impeachment articles.

Elite politics focuses on the containment of popular dissent and protest because it fears popular discontent might become the basis for uncontrollable pressure for radical political and economic reforms.

The left’s rise offers new hope of reform and change especially around matters of social and economic inequality, representing a direct challenge to the corporate-dominated DNC leadership; it has mobilised new energy behind opposition to the Trump administration especially through calls for the abolition of the reviled Immigration and Customs Enforcement (ICE), and the racist and misogynistic tropes emanating on a daily basis from the White House.

It has also brought greater attention to the Palestinian cause, not to mention opposition to ‘forever wars’ that seems to overlap with elements of the GOP and the conservative right; hence the significance of Quincy and SPRI.

Also read: How ICE Enforcement Has Changed Under the Trump Administration

President Trump, GOP and the DNC are already targeting the left as either the most dire threat to US democracy (see rhetoric about Venezuela-isation of America), or as unelectable.

The DNC of course has form on such targeting – the numerous examples of sabotage during the Sanders 2016 campaign, for example. The main parties are adept at using ‘insurgencies’ to bolster voting for them, while doing all in their power to domesticate and incorporate radical messages.

Ultimately, Congressional electoral politics is institutionally-limited – requiring little to no mass mobilisation even to bolster congressional politics, especially from radical movements for change, although Trump, with his mass rallies and bull horn signals to white supremacists and appointments to high office of the likes of Steve Bannon and Stephen Miller, is better at that.

Nevertheless, the 1930s New Deal and the 1960s Great Society programmes showed how far to the left US politics can swing.  Even limited reform on inequality matters, as does the development of new forces opposed to America’s imperial war machine.

The year 2020 promises to be another fascinating one in US politics, a political opportunity to defeat Trumpism and its effective supporters in the leadership of the Democratic party.