The spotlight of the week was undoubtedly the UN Secretary-General’s rare usage of 'right to reply' function during a Council discussion on the Ethiopian government’s action of expelling UN officials. New Delhi: India urged humanitarian workers to be “sensitive” to the ground situation in a complex “politico-military” conflict, even as UN Secretary-General Antonio Guterres demanded that Ethiopia show written proof that seven UN officials it expelled had meddled with internal affairs.

Last week, the only Council product was a press statement issued on October 9 on the devastating mosque attack in Afghanistan by Islamic State in Khorasan Province (ISKP). It condemned the attack, which left over 150 dead and injured, and called for bringing the perpetrators and their sponsors to justice.

The spotlight of the week was undoubtedly the UN Secretary-General’s rare usage of ‘right to reply’ function during a Council discussion on the Ethiopian government’s action of expelling UN officials.

On September 30, Ethiopia declared that seven UN officials working for three different UN aid agencies were ‘persona non grata’. They were given 72 hours to leave the country. Council members had discussed the expulsion under the ‘Any other business’ on October 1, but it had been a closed meeting with no public statements.

The open briefing on October 6 was sought by the western UNSC members – the 10th such meeting by the Council since violence broke out in Ethiopia’s Tigray region last November.

Ethiopian permanent representative to UN, Taye Atske Selassie Amde, said that it was surprising that the Council was meeting to discuss the expulsion of UN staff, which was a sovereign prerogative of Ethiopia.

He alleged that UN officials had falsified claims about people dying of hunger and were biased in favour of the Tigray People’s Liberation Front (TPLF), who are fighting Ethiopian armed forces.

Selassie stated that the UN officials made other staff “openly cheer” the withdrawal of government forces from Tigray. He also accused them of facilitating the deportation of certain Ethiopian migrants from Saudi Arabia to third countries to be trained to join the TPLF forces. FILE PHOTO: A tank damaged during the fighting between Ethiopia’s National Defense Force (ENDF) and Tigray Special Forces stands on the outskirts of Humera town in Ethiopia July 1, 2021. REUTERS/Stringer

The Ethiopian envoy mentioned that a formal letter had been sent to the UN in July about misconduct by UN staff.

Guterres then sought a ‘right to reply’ from the Council president. After getting permission, he asked the Ethiopian government to submit written proof about the claims made against the seven UN officials. The UN’s highest-ranking official also said that he twice requested Prime Minister Abiy Ahmed to furnish concerns about UN staff in writing, but had received no information.

“And so for us, the question is very simple. We believe that Ethiopia does not have right to expel these members of the UN. We believe Ethiopia is violating international law in doing so…” Guterres said.

The US, the UK, Ireland, Estonia, France and Norway had a range of expressions – from shock to condemnation – for the expulsion and called for Ethiopia to reverse its decision. The US envoy to UN, Linda Thomas-Greenfield, described it as an “affront”, with “no justification”.

Russia and China, who have traditionally backed Ethiopia on the Tigray crisis, expressed “regret” at the expulsion and called for a dialogue to resolve the stalemate.

The Russian representative reiterated that Tigray was an internal matter for Ethiopia, while China asserted that the current deadlock between UN and Addis Ababa required “quiet diplomacy”.

China was supported on the ‘quiet diplomacy’ front by the three African and one Caribbean nation on the Council. Speaking on behalf of Kenya, Niger and St Vincent and the Grenadines, Tunisia’s Tarek Ladeb said that discussing these “publicly may not be constructive in the current circumstances, nor will it alleviate the suffering of the populations affected by the conflict in northern Ethiopia”.

The Irish envoy stated that “quiet diplomacy” had already been given a chance and despite it there were continuous persistent reports of “inflammatory and dehumanising language” and that of “conflict-related sexual violence and atrocities, denial of access to humanitarian aid, and attacks on humanitarian workers”.

During the Tigray crisis, India’s instinct has been to back the Ethiopian government, albeit by nuancing its stance by referring to federal constitutional principles.

Indian permanent representative to UN, T.S. Tirumurti, described the expulsion as “unfortunate” and called for de-escalation through “engagement and dialogue”. Tirumurti stated that while India was “not aware of the circumstances” of the expulsion, it views that the “founding principles of humanitarian assistance, i.e., humanity, neutrality, impartiality, and independence should always guide any humanitarian action”.

He said that humanitarian workers “should also be sensitive to the situation on the ground and adhere to these principles especially when the host state is facing a complex politico-military situation internally”.

Asserting that the UN and Ethiopia cannot work at cross-purposes, he urged them to work closely. Just like Russia, India hoped that there was no politicisation of the matter.

Besides, India has welcomed the formation of the new government by Abby Ahmed after elections on October 4 and the announcement of inclusive national dialogue. 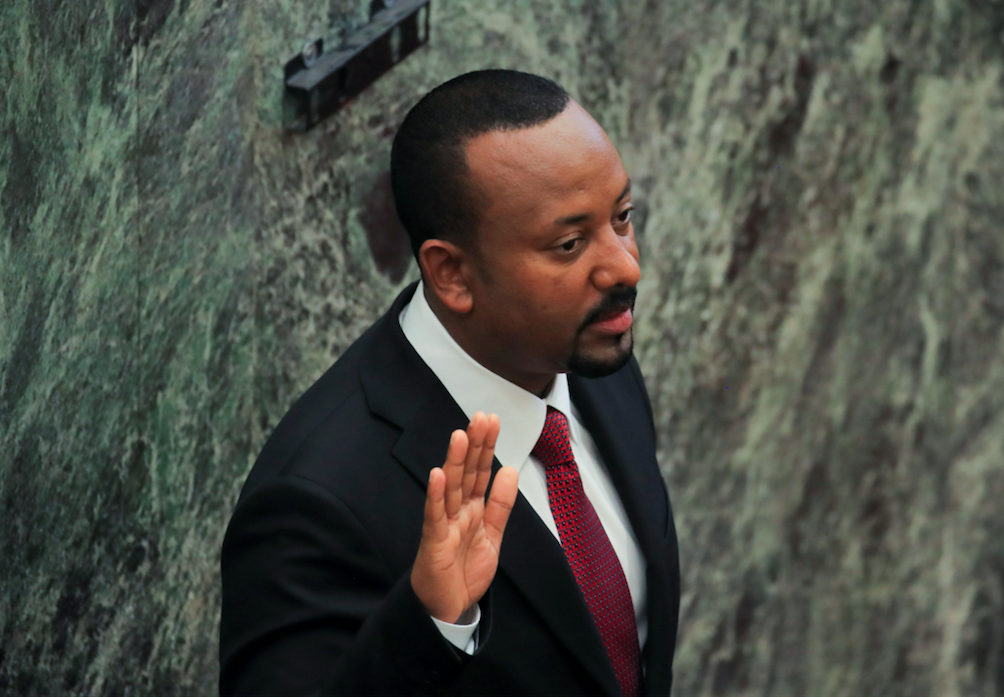 This is the second time that India has supported Ethiopia in recent months in the UNSC.

Like in the case of Ethiopia, India’s statements aligned more with Russia on a couple of other issues last week.

At the briefing of the situation in DRC, Russian deputy permanent representative Anna M. Evstigneeva had not been as effusive as her western counterparts in welcoming the transition plan for MONUSCO for a phased drawdown in the country. She merely noted that Russia would “carefully study” the transition plan prepared by the UN in coordination with the DRC government. She also stressed that it was important to fully implement the 2013 Peace, Security and Cooperation Framework agreement.

India’s language was similarly muted about the transition plan. “We have taken note of the details of the transition plan, including the 18 benchmarks, agreed between MONUSCO and the authorities of the Democratic Republic of the Congo. The assessment of progress on the benchmarks needs to be realistic,” said Indian diplomat R. Ravindra.

He also reminded that the transition plan had to “be in line with the Peace, Security and Cooperation Framework for the Democratic Republic of the Congo and the Region”.

India and Russia were also mainly on the same page during the UNSC’s monthly meeting on Syria’s chemical weapons stash and its usage. This time, there was considerable criticism about Syria refusing to grant a visa to an expert member of Organisation for the Prohibition of Chemical Weapons’s Declaration Assessment Team (DAT) for a visit later this month. Following the refusal, OPCW Technical secretariat decided that the team would not be deployed to Syria, the Council was informed by Under-Secretary-General and High Representative for Disarmament Affairs, Izumi Nakamitsu. She asked the Council to “take resolute action and respond to Syria’s non-compliance”.

The Russian representative made a scathing speech, abrasively accusing western states of politicising the OPCW and defending the Syrian government.

India did not deploy similar language but sought to remind that any investigation into the use of chemical weapons must “be impartial, credible and objective, while scrupulously following the provisions and procedure embedded in the Convention and in conformity with the delicate balance of power and responsibility enshrined in it to establish the facts and reach evidence-based conclusions.”

Stating that the visit of OPCW DAT should take place soon, India hoped that the UN’s chemical weapons watchdog and Syria “will resolve the relevant issues expeditiously”.

Outside the Council chambers, India’s remarks at the Arria-formula meeting on Belarus would also have been viewed positively in Moscow. According to the organisers of the discussion on October 8, the virtual meeting aimed to highlight “the deteriorating human rights situation in Belarus and the aggressive behaviour of Belarusian authorities against neighbouring countries”. The meeting was sponsored by the US, the UK, Estonia, Norway, France and Ireland.

In a short speech, India noted that the “situation at present in Belarus remains largely peaceful and stable”, taking a contrary position to the western sponsors of the meeting. Besides, India also added that “discussions on a country’s internal affairs are best avoided until and unless they have a significant regional or international ramification”.

While India’s traditional position is more aligned with Russia on several issues, it has also been careful not to raise a potentially embarrassing issue for the United States during a briefing on Haiti.

Last week, the Council received a briefing on the UN Integrated Office in Haiti (BINUH), ahead of negotiations for renewing the mission’s mandate that expires on October 15. Haiti has been hit by twin political and humanitarian crises following the July assassination of President Jovenel Moise and the August 14 earthquake.

With the country near collapse, tens of thousands of displaced Haitians had been trekking to the US. The US administration has promised to repatriate them, with photos splashed in newspapers of US border agents on horseback trying to deter desperate Haitian refugees.

The Mexican representative said that more than 20,000 Haitians have currently arrived at its southern-most province of Chiapas. He estimated an additional 60,000 Haitians across Colombia and Panama, many of them looking for a way to enter the US.

The Haitian foreign minister Claude Joseph stated that the Haitians at the US-Mexico border should be “treated with dignity and humanity”.

On behalf of the ‘A3 plus one’, Inga Rhonda King of the Caribbean nation of St Vincent and the Grenadines expressed deep concern about the “inhumane” large-scale deportations of Haitians from the border. “We express our fervent hope that elemental humanity and international human rights law will be strictly observed, even during times when countries are securing their borders,” she said. 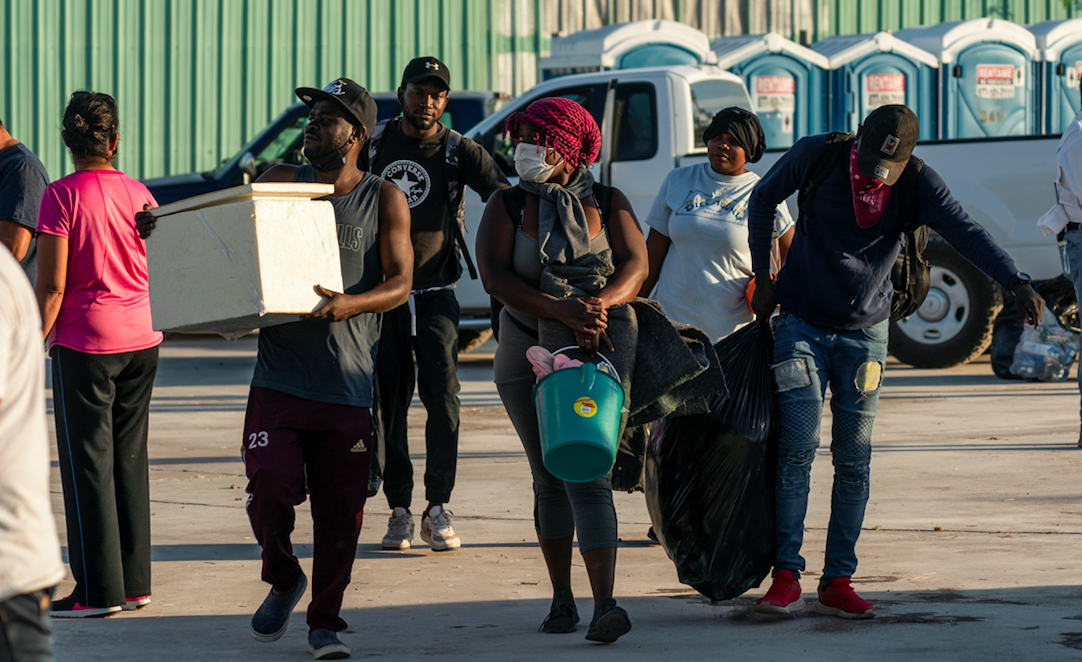 Migrants seeking asylum in the US, who returned to Mexican side of the border to avoid deportation, arrive to a new space to take shelter which the National Institute of Immigration provided in Ciudad Acuna, Mexico, September 24, 2021. Photo: Reuters/Go Nakamura

China’s Geng Shuang said that fleeing Haitian’s fundamental rights “have been undermined by their unfair treatment in foreign lands and their mass repatriation”.

Tirumurti made a detailed statement enunciating the challenges facing the Haitian authorities. However, there was no mention of the situation at the US-Mexico border by India, which is also facing pressure on its north-eastern border from Myanmarese refugees.

Kenya’s first high-level open debate on ‘Diversity, state-building and the search for peace’ will be held on Tuesday, October 12, chaired by Kenyan President Uhuru Kenyatta. Minister of State for external affairs, V. Muraleedharan, will represent India.

There are two separate scheduled meetings related to the UN Mission for the Referendum in Western Sahara this week – one for troop-contributing countries on Monday, following by a briefing two days later.

The extension of the mandate of the UN mission in Haiti is on the agenda for October 14. A day later, the ‘A3 plus one’ will be hosting a virtual Arria-formula meeting on Haiti.

Besides, Council members will attend regularly scheduled briefings on Yemen, Colombia and Kosovo.