The statement upgraded the Council's response, calling on the military to “exercise restraint” and condemned the crackdown on “peaceful protestors” but did not give any indication of punitive action. 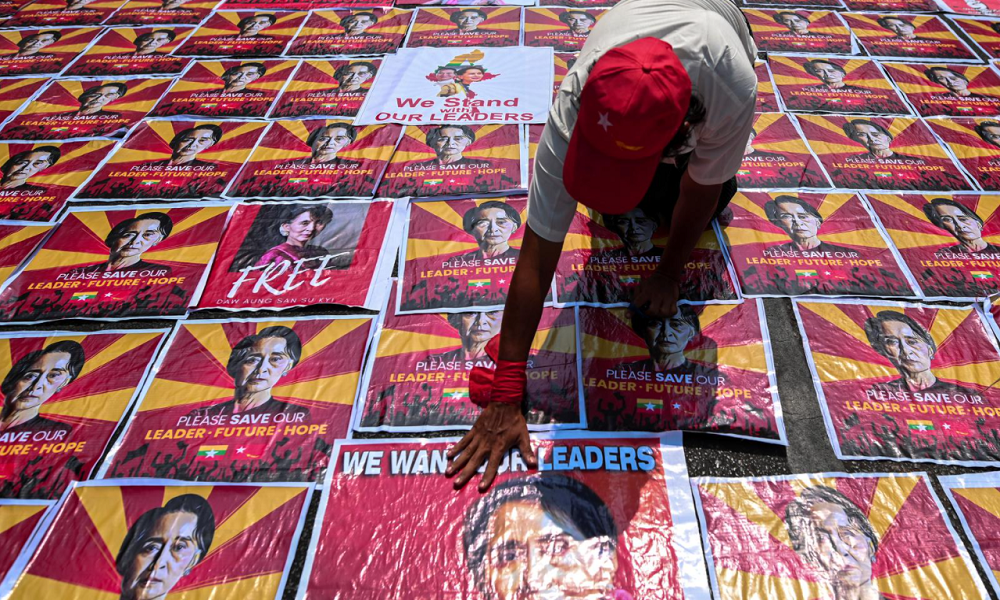 A demonstrator takes part in a protest against the military coup in Yangon, Myanmar, February 22, 2021. Photo: Reuters

New Delhi: The United Nations Security Council (UNSC) on Wednesday upgraded its response to Myanmar in the form of a presidential statement, calling on the military to “exercise restraint” and condemned the crackdown on “peaceful protestors” but did not give any indication of punitive action.

On February 4, the Council president, the UK, had issued a press statement that expressed “deep concern” on the military takeover of Myanmar, called for support to “democratic transition” and the immediate release of detained political leaders.

Since then, more than 60 protestors have killed by security forces, with hundreds taken into custody.

A month later, the Council president, the US, issued a presidential statement on behalf of all 15 members, which reiterated the “deep concern” at the state of emergency and called for freeing all political leaders, including State Counsellor Aung San Suu Kyi and President Win Myint.

A presidential statement has the backing of all the members of the Council, including the permanent five.

The text of the statement had been circulated by the ‘penholder’ on Myanmar, UK, last Friday (March 5) among the Council members.

A Reuters story, published before the passage of the presidential statement, had claimed that India, along with China, Russia and Vietnam, had stalled the adoption. Human rights activists had immediately painted all the countries as ‘villains’, which led to a backlash on Myanmar social media.

The Indian embassy posted a message on its Facebook and Twitter accounts urging patience to await the outcome of the negotiations in the Security Council in New York. It had also described the characterisation of India’s role in the UNSC by social media posts as “mischievous” and “biased”.

According to Reuters and Security Council Report, the member states were unable to agree during the negotiations to insert language warning of “further measures” if the situation in Myanmar continued to deteriorate.

While the latest UNSC presidential statement again expresses “deep concern”, it uses the phrase “strongly condemns” for the action by the military against “peaceful protestors, including against women, youth and children”.

The Council also conveyed “deep concern at restrictions on medical personnel, civil society, labour union members, journalists and media workers, and calls for the immediate release of all those detained arbitrarily”.

Further, the UN’s body in charge of international peace and security called on the “military to exercise utmost restraint and emphasises that it is following the situation closely”.

The February statement had signed off with an affirmation of a strong commitment to the “sovereignty, political independence, territorial integrity and unity of Myanmar”. This time, the Council inserted language in support of “the people of Myanmar”.

The revised text in the March presidential statement expanded on ASEAN’s role in the current crisis, and also expressed support for the UNSC special envoy’s effort to engage all parties and urged her to visit Myanmar as soon as possible.

Sources said that India had again suggested several amendments, all of which had been accepted.

After the UNSC statement of issued, reports from Myanmar stated that at least eight people had been killed by security forces on Thursday.

A verified Twitter account, ‘cvdom2021’ that claims to disseminate information about the civil disobedience movement in Myanmar, asserted that the Security Council needs to take more robust steps.

International community needs to send a stronger message. Right after UNSC produces a “condemnation” statement, the terrorist junta again murdered people in broad daylight. What kind of message does it send to UNSC?

“International community needs to send a stronger message. Right after UNSC produces a ‘condemnation’ statement, the terrorist junta again murdered people in broad daylight. What kind of message does it send to UNSC?” it wrote.