New Delhi: On the second day of the United Nations Human Rights Council’s (UNHRC) three-week session, India and Pakistan countered each other’s statements on Kashmir, even as senior diplomats remain parked at Geneva to keep an eye out on the activities of the other side at the international body.

Pakistan made four statements on Kashmir, out of which the national statement was made by their foreign minister Shah Mehmood Qureshi. The rest were delivered by Pakistan PM’s special envoy and former foreign secretary Tehmina Janjua on behalf of the Organisation of Islamic Conference and other countries.

India’s national statement was delivered by MEA secretary (east) Vijay Thakur Singh, while the response to the Pakistani remarks was read out by the first secretary posted at the Indian permanent mission in Geneva, Vimarsh Aryan.

The official Indian statement was a reaction to the United Nations high commissioner for human rights Michelle Bachelet on Monday. She expressed concerns about the continuing detention of political leaders & activists and the communication clampdown in Kashmir. She also spoke about the exclusion of 1.9 million people from the National Register of Citizens in Assam, asking India to ensure they would be protected from statelessness.

The senior Indian diplomat began by asserting that India is the world’s largest democracy with “unflinching” belief in a secular polity. “Our independent judiciary is the guardian of these fundamental rights and liberties. Our free media, vibrant civil society and the impartial human rights institutions provide an effective framework for [the] protection of human rights of all sections of society,” said Singh.

Delineating India’s position, she argued that recent legislative steps to read down Article 370 to ensure that “progressive measures will also be fully applicable to our citizens in Jammu & Kashmir and Ladakh”.

On August 6, the Indian parliament approved the change in Jammu and Kashmir’s constitutional status and bifurcation into two Union Territories.

Singh said that it was an “entirely internal” sovereign decision and that no country can “accept interference in its internal affairs, certainly not India”.

She also claimed that “despite challenging circumstances”, Jammu and Kashmir is ensuring “basic services, essential supplies, normal functioning of institutions, mobility and nearly full connectivity”. “Democratic processes have been initiated. Restrictions are being eased continuously,” added the MEA secretary.

Singh asserted that the restrictions imposed on Kashmir were due to Pakistan threatening to incite violence.

#WATCH Secy (East) MEA at UNHRC: A delegation has given a running commentary with offensive rhetoric of false allegations & concocted charges against my country. World is aware that this narrative comes from epicentre of global terrorism, where ring leaders were sheltered for yrs pic.twitter.com/x8LL9lJyX0

There is still complete shutdown of internet and mobile services in Kashmir, while some 40,000 landlines are active throughout the state. Political leaders, including three former chief ministers of Jammu and Kashmir, continue to be detained.

“Temporary preventive and precautionary measures were necessitated to ensure safety and security of our citizens in the face of credible threats of cross-border terrorism,” she added.

Describing Pakistan as the “epicentre of global terrorism”, Singh said that Islamabad “conducts cross-border terrorism as a form of ‘alternate diplomacy’.”

“We should call out those who are misusing this platform for malicious political agendas under the garb of human rights. Those who are attempting this speak on the human rights of minorities in other countries whilst trampling upon them at will in their own country. They cry victim when they actually are the perpetrators,” she added.

In a separate reply to the Pakistani statement, Indian diplomat Vimarsh Aryan said that Pakistan had peddled “blatant misrepresentation of facts and false narrative” and was an ill-disguised effort to advance its territorial ambitions. “We reject this propaganda,” he said.

Aryan also pointed out that Pakistan itself had persecuted “religious and ethnic minorities – be it the Christians, Sikhs, Shias, Ahmadiyas and Hindus”.

Vimarsh Aryan, First Secretary MEA at UNHRC: Pakistan’s gory record speaks for itself. This rhetoric will not distract international attention from Pakistan’s persecution & elimination of religious and ethnic minorities – be it the Christians, Sikhs, Shias, Ahmadiyas and Hindus. pic.twitter.com/fjqzzpMcgF

“This is the reason that Pakistan no longer publishes official statistics about its minorities as India does.  Blatant abuse of blasphemy laws in Pakistan to persecute minorities is well documented,” he added.

He also referred to the recent case of Sikh girl Jagjit Kaur who was allegedly abducted, forcibly married and converted to Islam.

“It defies credibility that Pakistan, which is the epicentre of global terrorism is claiming to speak on behalf of unnamed countries on the issue of human rights,” he stated, adding, “It forgets that terrorism is the worst form of human rights abuse”.

In one of her statements, Janjua had claimed to speak on behalf of more than 50 countries but had not named them.

Earlier in the day, Pakistan foreign minister Shah Mehmood Qureshi said that the UNHRC must constitute a Commission of Inquiry to probe alleged human rights violations in Kashmir.

“The forlorn, traumatised towns, mountains, plains and valleys of Indian Occupied Jammu & Kashmir reverberate today, with the grim reminders of Rwanda, Srebrenica, the Rohingya and the pogrom of Gujarat,” Qureshi stated.

He claimed that India was planning to conduct “genocide” in Kashmir.

“The people of Indian Occupied Jammu & Kashmir are apprehending the worst… I shudder to mention the word genocide here, but I must. With respect to the Genocide Convention, the Kashmiri people in the occupied territory – as a national, ethnic, racial and religious group of people – face grave threats to their lives, way of living and livelihoods; from a murderous, misogynistic, and xenophobic regime,” he said.

Qureshi urged nations not to “let political, commercial, and parochial considerations cloud and impair our thoughts and action”

“We must not allow this august body to be embarrassed on the world stage. As a founding member of this Council, Pakistan feels morally and ethically bound to prevent this from occurring. But to do so, we must not remain indifferent to the tragedy that is unfolding before our eyes. We must act decisively and with conviction,” he said. 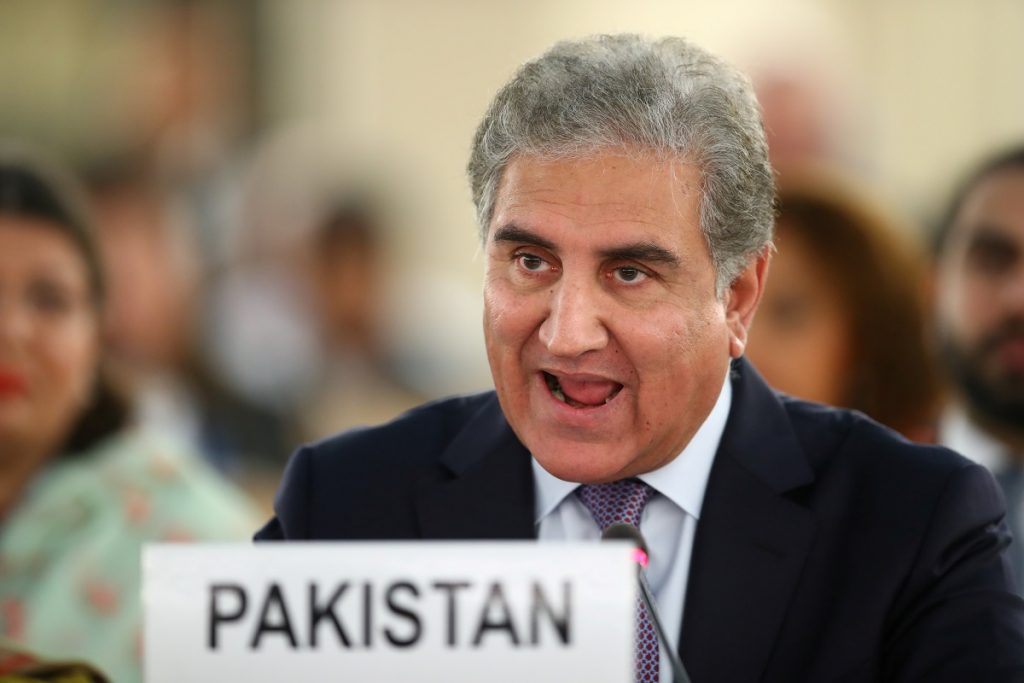 There was no deviation in stated positions and posturing in both the Indian and Pakistani statements, which have largely reiterated recent rhetorical statements.

However, Qureshi’s statement did not call for either a resolution or at least a debate on Kashmir at the council. As per Indian government sources, this was likely due to the inability of Pakistan to muster enough numbers. A simple majority among the 47 UNHRC members, minus abstentions, is required to include a subject for general debate in the council.

While Qureshi may be returning to Pakistan in a day or two from Geneva, an army of senior Pakistani diplomats have been camping at the Swiss capital. Similarly, India’s high-level delegation, which includes the Indian high commissioner to Pakistan, will remain in town till the end of the session on September 27.

“We have to remain alert. A procedural vote can be introduced any time over the next three weeks,” said the senior official.