The alliance will allow for greater sharing of defence capabilities, including help Australia acquire nuclear-powered submarines, amid China's growing influence over the strategically vital region. 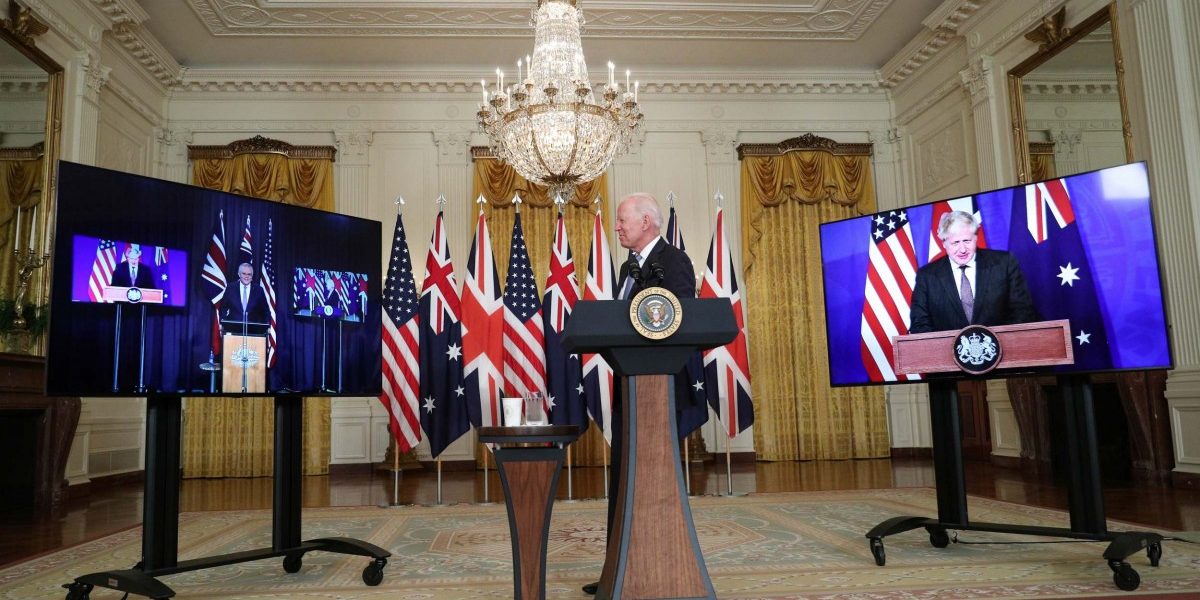 London/Washington: The US, Britain and Australia have announced a new trilateral security alliance for the Indo-Pacific to protect their shared interests and allow for greater sharing of defence capabilities, including help Australia acquire nuclear-powered submarines, amid China’s growing influence over the strategically vital region.

The new alliance AUKUS, dubbed as “landmark”, was launched virtually with a joint televised address on Wednesday. Under the AUKUS alliance, the three nations have agreed to enhance the development of joint capabilities and technology sharing, foster deeper integration of security and defence-related science, technology, industrial bases and supply chains.

Under the first major initiative of AUKUS, Australia would build a fleet of nuclear-powered submarines with the help of the US and the UK, a capability aimed at promoting stability in the Indo-Pacific region.

The UK, Australia and US are natural allies while we may be separated geographically, our interests and values are shared, said British Prime Minister Boris Johnson, who joined US President Joe Biden and Australian Prime Minister Scott Morrison from Downing Street for the virtual address before a joint statement was released.

The AUKUS alliance will bring us closer than ever, creating a new defence partnership and driving jobs and prosperity. This partnership will become increasingly vital for defending our interests in the Indo-Pacific region and, by extension, protecting our people back at home, he said.

Johnson said the aim of the new partnership was working hand in glove and to preserve security and stability in the Indo-Pacific. “We’re opening a new chapter in our friendship. And the first task of this partnership will be to help Australia acquire a fleet of nuclear-powered submarines. Emphasising, of course, that the submarines in question will be powered by nuclear reactors not armed with nuclear weapons. And our work will be fully in line with our nonproliferation obligations,” he said.

All three leaders insisted that the submarines would be nuclear-powered and the effort is geared towards ensuring peace in the Indo-Pacific region.

AUKUS will enhance our contribution to our growing network of partnerships in the Indo-Pacific region. our ASEAN friends, our bilateral strategic partners, the Quad, Five Eyes countries, and of course our dear Pacific family. The first major initiative of AUKUS will be to deliver a nuclear-powered submarine fleet for Australia, Australian Prime Minister Morrison said.

Over the next 18 months, the three countries will work together to seek to determine the best way forward to achieve this, he said.

This will include an intense examination of what we need to do to exercise our nuclear stewardship responsibilities here in Australia. We intend to build these submarines in Adelaide, Australia in close cooperation with the United Kingdom and the United States, he said.

Australia is not seeking to acquire nuclear weapons or establish a civil nuclear capability, Morrison asserted, adding that the US will continue to meet all its nuclear nonproliferation obligations.

Speaking from the East Room of the White House, US President Biden observed that the three countries will update and enhance their shared ability to take on the threats of the 21st century, just as they did in the 20th century, together.

“Our nations and our brave fighting forces have stood shoulder to shoulder for literally more than 100 years, through the trench fighting in World War I, the island hopping in World War II during the frigid winters in Korea, and the scorching heat of the Persian Gulf,” he said.

“The United States, Australia, United Kingdom have long been faithful and capable partners and we’re even closer today. Today, we’re taking another historic step to deepen and formalise cooperation among all three of our nations because we all recognise the imperative of ensuring peace stability in the Indo-Pacific over the long term,” he said.

Biden said AUKUS will bring together sailors, scientists, and industries to maintain and expand their edge and military capabilities and critical technologies such as cyber, artificial intelligence, quantum technologies, and undersea domains.

The agreement reflects the unique level of trust and cooperation between our three countries, who already share extensive intelligence through the Five Eyes alliance, Downing Street said.

“Recognising our deep defence ties, built over decades, today we also embark on further trilateral collaboration under AUKUS to enhance our joint capabilities and interoperability. These initial efforts will focus on cyber capabilities, artificial intelligence, quantum technologies, and additional undersea capabilities,” reads the joint statement issued by the leaders.

“Through AUKUS, our governments will strengthen the ability of each to support our security and defence interests, building on our longstanding and ongoing bilateral ties.

The leaders said their new endeavour is aimed at helping sustain peace and stability in the Indo-Pacific region.

The initial scoping phase for the new alliance is expected to take 18 months. The UK said that as it has built and operated world-class nuclear-powered submarines for over 60 years, it will bring “deep expertise and experience” to the first project under AUKUS.

The UK and US, already leading members of NATO defence alliance, said the work done by AUKUS will support shared goals in new regions, promoting stability and protecting our people against new and emerging threats .

As set out in the Integrated Review, the Indo-Pacific is at the centre of intensifying geopolitical competition with potential flashpoints including unresolved territorial disputes; to nuclear proliferation and miscalculation; to climate change and non-state threats from terrorism and Serious Organised Crime. It is on the frontline of new security challenges, including in cyberspace, Downing Street said.

Highlighting this growing Indo-Pacific tilt, the UK government pointed to HMS Queen Elizabeth aircraft carrier’s deployment to the region alongside personnel and equipment from the US.

Last month, the Carrier Strike Group undertook a series of exercises with countries, including India and Australia, to build interoperability with like-minded partners , it said.

The announcement of AUKUS has come a week before a meeting of Quad leaders to be hosted by US President Biden in Washington on September 24. The meeting will also be attended by Prime Minister Narendra Modi, Prime Minister of Australia Morrison and Japanese premier Yoshihide Suga.

The evolving situation in the Indo-Pacific region in the wake of China’s increasing military muscle-flexing has become a major talking point among leading global powers. The US has been favouring making Quad a security architecture to check China’s growing assertiveness.

In November 2017, India, Japan, the US and Australia gave shape to the long-pending proposal of setting up the Quad to develop a new strategy to keep the critical sea routes in the Indo-Pacific free of any influence.

Beijing claims almost all of the 1.3 million square mile South China Sea as its sovereign territory. China has been building military bases on artificial islands in the region also claimed by Brunei, Malaysia, the Philippines, Taiwan and Vietnam.

China has built up and militarised many of the islands and reefs it controls in the region. Both maritime areas in the South and East China seas are stated to be rich in minerals, oil and other natural resources and are also vital to global trade.