A Coup, Bombings, Mass Arrests Have Made 2016 a Turbulent Year in Turkey

After an extraordinarily turbulent year, the Turkish people hope that 2017 will be calmer and more peaceful. 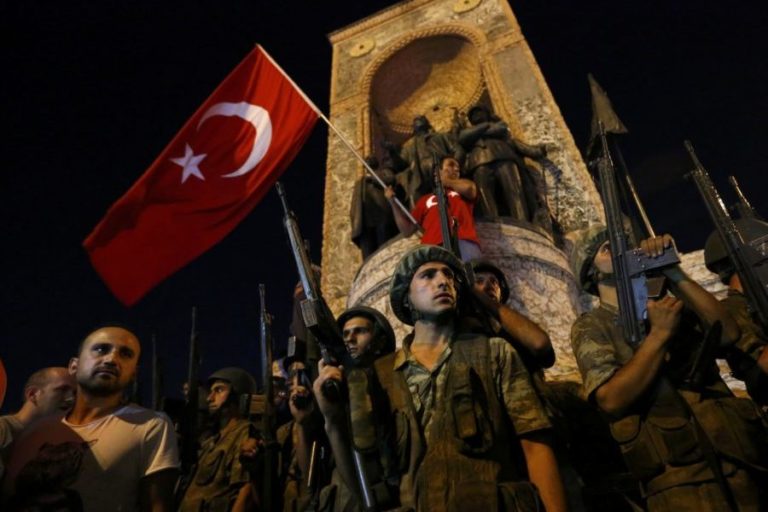 Turkey dominated headlines in a year of 24 bombings that killed at least 385 people, political turmoil, fist-fights in parliament, the sacking of a prime minister, strained ties with traditional Western allies, the assassination of the country’s Russian ambassador and a crackdown on independent media with the near-total silencing of free speech.

All of that was topped, however, by the July 15 attempted coup, which proved to be the most monumental event of the year for Turkey, driving thousands of people into the streets in defiance as rebel soldiers seized control of bridges in Istanbul and their jets bombed parliament in a failed attempt to shake President Recep Tayyip Erdogan’s grip on power.

A crackdown followed as the government blamed the coup on supporters of the exiled US-based preacher Fethullah Gulen. More than 100,000 people were sacked or suspended from their jobs, more than 36,000 arrested, hundreds of media outlets and non-governmental associations shuttered and more than 550 businesses confiscated by the state.

On the domestic political front, the biggest issue was the attempt by the ruling Justice and Development Party (AKP) to introduce an executive presidency system of governance, which would hand unprecedented power to Erdogan. Opponents are concerned it is the biggest step yet toward the establishment of one-man rule with no checks and balances.

The fate of MPs from the pro-Kurdish Peoples’ Democratic Party (HDP), with at least 10 of them languishing in prison, and the party itself – which refuses to condemn attacks by the Kurdistan Workers’ Party (PKK), considered a terrorist group by Ankara – was also high on the agenda and is likely to occupy headlines in 2017 as well.

The past 12 months proved to be another tough year for residents in Turkey’s Kurdish-majority southeast. Constant clashes between Turkish security forces and the PKK saw villages, towns and cities reduced to rubble as neither side seemed to worry about collateral damage.

The near-total exclusion from the conflict region of independent media meant that the corroboration of stories of brutalities perpetrated by each side has proved to be difficult.

On the foreign policy front, relations with Ankara’s primary allies, the US and the EU, neared a breaking point. Turkey and the US are at loggerheads over the role of Syrian-Kurdish groups in Syria’s civil war and the possible non-extradition of Gulen.

Animosity between Turkey and the EU reached such levels in 2016 that Ankara started accusing the bloc of harbouring and assisting “terrorists”. The EU accuses Turkey of straying from the path of democracy and universal human rights principles.

The assassination of Andrey Karlov, Russia’s ambassador in Ankara, on December 19, shocked the world, and concerns are growing over the future shape and direction of recently repaired Russo-Turkish relations.

With about 82 journalists in jail, Turkey also became the world’s biggest jailer of journalists, according to the Committee to Protect Journalists, a US-based media freedom monitor.

In spite of traditionally boasting a vibrant media sector, few independent and critical voices are left amid the various forms of pressure recently brought to bear upon dissenting voices. Various forms of control over internet access have also impeded the public’s access to information.

‘Headed for a wall’

No wonder many Turks are hoping for a calmer and more peaceful 2017. Yet prospects appear bleak as the underlying causes for most of 2016’s incidents remain unresolved. The country’s economy also looks set to face testing times.

Yusuf Kanli, a veteran journalist and political commentator, told Middle East Eye he feared 2017 would be so bad that Turkey would look back upon a “crazy” 2016 as a good year.

“Most probably we will miss 2016, given what looks to be in store for 2017. Nothing is well in any area,” said Kanli. “We are headed towards a wall at full speed and we don’t even know how strong that wall is.”

The defining moment of 2017 for Turkey, in Kanli’s view, will be the expected referendum on shifting to an executive presidency system of governance. He also said the entire process leading up to the referendum will be a crucial period.

But Mazhar Bagli, a sociologist and former AKP parliamentarian, predicted a more stable 2017 for Turkey.

“Both domestic and international forces attempted everything they could in 2016 to thwart the political conservatism the AKP represents, whether it was through the coup attempt, terror attacks or other things,” Bagli told the Middle East Eye.

“Academic analyses and my personal conviction tell me that 2017 will be less aggressive for Turkey if only because Turkish leaders and society as well will be able to draw on past experiences and deal with various situations,” said Bagli.

He agreed with Kanli that the expected referendum on shifting to an executive presidency would be the most significant event on the political calendar for 2017.

Bagli said regardless of the outcome, the referendum result will be a watershed moment for the country in 2017.

He said a yes vote would mean a change in the system of governance. A no vote, however, could lead the AKP to call an early general election, since it would then need to prove that it still had a public mandate to stay in power.

This article was originally published on the Middle East Eye.