President Trump, the Pandemic and the Politics of the 2020 US Poll

Trump seems to be snatching defeat from the jaws of political victory by doing almost the exact opposite of what might be considered logical. 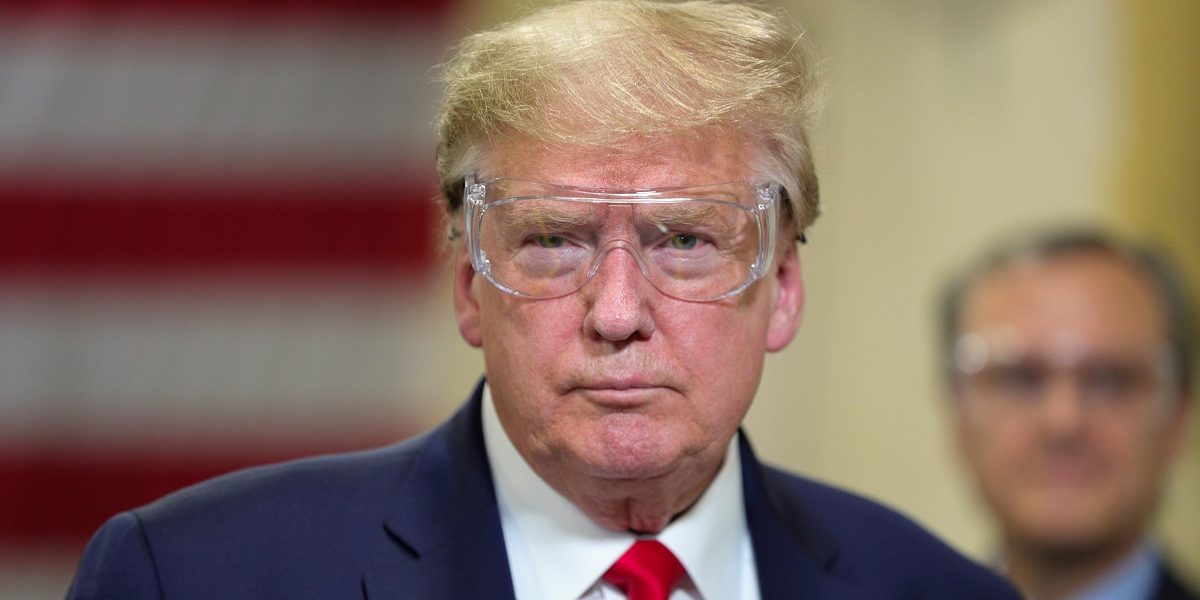 US President Donald Trump looks at an assembly line during a tour of Honeywell's facility manufacturing protective face masks for COVID-19 in Phoenix, Arizona, US, May 5, 2020. Photo: REUTERS/Tom Brenner/File Photo

US President Donald Trump is in trouble. He’s losing a slice of his white evangelical voters due to the way he’s handled the protests following the police killing of George Floyd. Mass protests have been supported across every nook and cranny of the country and spread to the world. Simultaneously, the coronavirus is infecting Americans at a rapid rate and moving into Trump’s political heartlands. His recent comeback rally in Tulsa was a complete flop as the venue was less than one-third full, and the overflow rally outside was cancelled as no one showed up for fear of infection. Further election campaign events have been cancelled in its wake. Trump trails his presidential opponent, Joe Biden, in national and battleground states’ polls, including Florida. And a Supreme Court he’s packed with right-wingers has snubbed him several times in the past couple of weeks.

The exasperation among Trumpistas is palpable. Fox News host and Trump cheerleader Tucker Carlson summed up their frustration. How could Trump be tanking so badly given two “political gifts” in an election year? The pandemic and the “rioting and looting” following the police killing of George Floyd are those “gifts”. Normally, a national emergency and a bout of “looting” etc would provide any president a platform to appear presidential – a representative of the people, the only truly nationally-elected figure, who in times of crisis and pain provides balm for the nation’s wounds, rallies the people, and stands above narrow partisan and personal politics. And reaps the rewards, the rally-round-the-flag-effect, of a grateful people.

But somehow Trump seems to be snatching defeat from the jaws of political victory by doing almost the exact opposite of what might be considered logical.

Why? There could be several reasons or combinations of reasons.

The election is in the bag

Perhaps Trump believes that a combination of his rock solid and loyal 2016 voters, voter suppression strategies across GOP-controlled states, lower voter turnout due to fear of infection, and a rhetorical campaign against the use of mail-in ie postal ballots will swing the election. This is a distinct possibility. His support may be solid, even as some white evangelicals and rural voters lose confidence at the moment. But physical turnout has been strong with voters willing to stand for hours in line to vote in key elections. Trump seems to have galvanised his opponents more than he’s firing up his political base. Look at the November 2018 mid-term results – a devastating blow to Trump and the GOP.

Election delay due to COVID-19?

This would go against his “business as usual”, “COVID is conquered” line. But the number and rate of infections continue to increase – it’s almost out of control. So, Trump could feasibly flip-flop back to reality and be secure in the knowledge that the majority of his supporters will follow him, and may sway more independent voters. And recall Jared Kushner’s ambiguity on whether the election could be delayed due to the coronavirus – and Trump’s ‘joking’ about the need to make up two lost years of his term of office due to the Robert Mueller investigation. It is worth keeping an eye on this possibility even as the power over the calling or delaying of elections constitutionally rests in the hands of Congress, not the White House. But President Trump does not value constitutional norms. 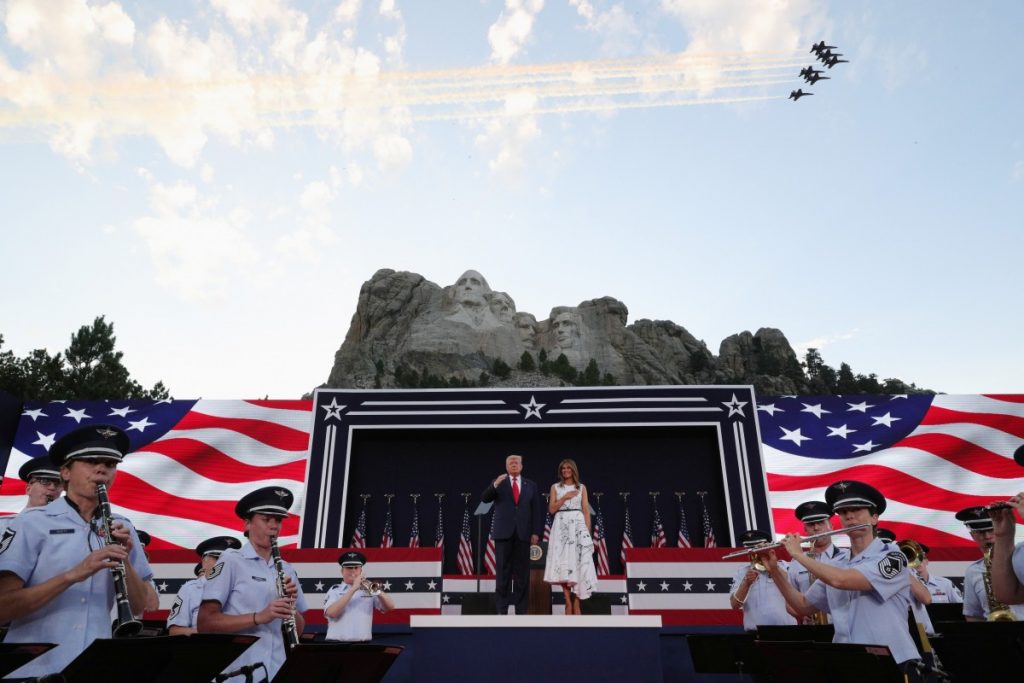 Not accept defeat in November and refuse to leave office?

Another even more dangerous scenario. Trump loses narrowly, declares voter fraud, and there’s no immediate election result due to recounts and legal challenges. He would have until mid-January 2021 to rile up his political support across the electorate, backed up by armed right-wing groups, and rank-and-file law enforcement. With a Conservative majority on the Supreme Court, we could have a major constitutional crisis in November. And the Democratic party’s leadership has shown no appetite for mass mobilisations against Trump’s attacks on democratic rights.

However, a people mobilised because of the inequities and sufferings of the pandemic, and the lethal brutality of police violence against minorities and protestors, may have other views if Trump should cling to office. In that case, the US faces the prospect of bloody political strife, an outcome that has long been predicted by scholars and hedge fund managers alike.

Also Read: Self-Absorbed, Uncaring, Incompetent: COVID Has Exposed Populist Leaders for What They Are

He just doesn’t care about re-election, he’s had enough

Not his style, he’s a self-declared winner, not a loser. There’s nothing about his demeanour that suggests Trump is finished with the presidency.

Deconstruction of the American state

The reason he’s behaving contrary to expectations of a president in a time of crisis is his belief system, such as it is. Hence, he’s following a ‘strategy’ outlined by his erstwhile chief of strategy Stephen Bannon. It basically refers to paring down or rendering toothless a dense federal regulatory framework for managing the environment, labour standards, healthcare, federal emergencies, and the like, while beefing up the coercive instruments and personnel of the state – law enforcement, border patrols, and immigration and customs enforcement.

The threat of calling out the US military against anti-racist protestors and the use of tear gas etc against peaceful demonstrators to clear a way out of the White House for a photo-opportunity outside a church tells the story. Trumpists want a weak state when it comes to protecting people from pandemics but a strong state when it comes to suppressing democratic rights and constitutional norms against the ‘deep state’ and the ‘enemy within’ – i.e. working people and minorities.

The corollary of the deconstruction of the administrative state is beefing up corporate power and underwriting the stock market – which is part of Trump’s belief system too, indeed close to his own plutocratic heart and self-interest.

The grotesque end of neoliberalism in decay

Trump is no victim of circumstances, nor is he the author of historical development and circumstance. He’s “a leaf in the whirlwind of time”. Like the rest of us, he has appeared at a particular point in a history he had a relatively small part in making. He arrived at the end of decades of neoliberal ascendancy – the principle stated at his inaugural address by President Reagan in 1981: “Government is not the solution to our problem, government is the problem.” He was referring to the ‘social state’ that provides for the elderly, poor and the sick, of course, the welfare state. 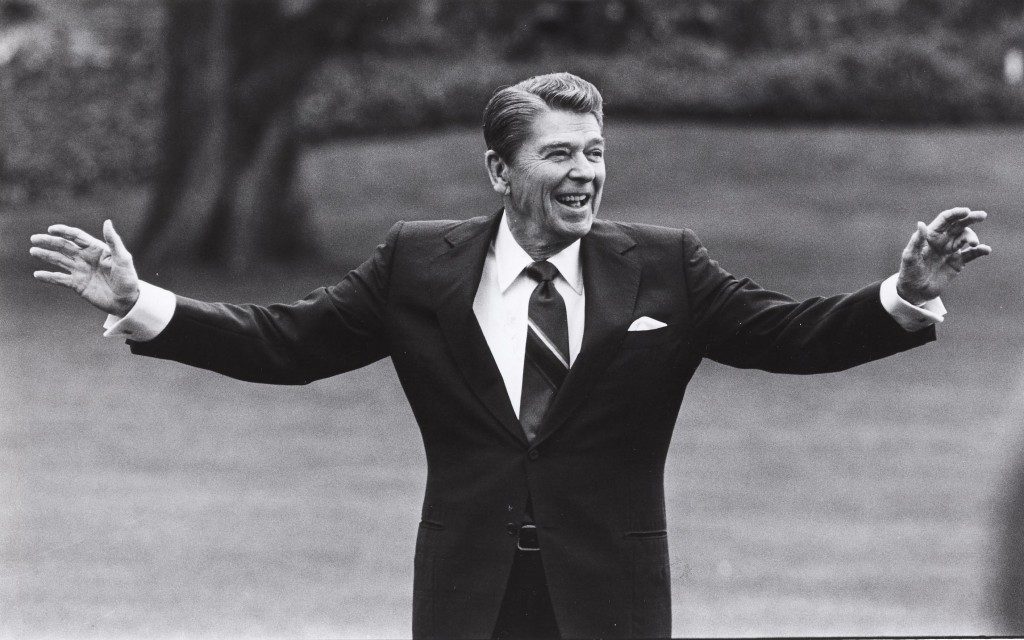 And when we look at US history from the late 19th century, through the progressive era to World War I, the New Deal in the 1930s, the Fair Deal in the 1950s, and the Great Society programmes of the 1960s, we see a clear line of development. The growth of the American federal government, taking responsibility, managing a growing, industrialising, urbanising complex society and polity, increasingly embedded in and gradually rising to lead the world.

But Reagan’s principle has been applied since 1981 with deleterious consequences not only in terms of greater inequality and social deprivation, but racialised-ideological-political tribalisation, and a significant decline in the legitimacy of the two main political parties of government. Change candidates and ‘outsiders’ became popular as a result. Obama promised change but did not deliver. Enter Donald Trump.

So when President Trump declared that he is not responsible, and neither is the federal government, for dealing with the COVID-19 pandemic’s effects in cities and states, especially those run by Democrats, he was giving a brutally cruel twist to but essentially practising a neoliberal mantra that has become the dominant consensus position in party politics.

It is a grotesque position to take. I doubt any other US president would replicate it entirely. Trump is an outlier. His position is clumsy, divisive, uncaring, even immoral. But as has been pointed out so frequently during the reign of President Trump, he is the unadorned and ‘true’ face of American power – or, rather more accurately, the power and thinking of its power elites. Those who get most of what there is to get in economic and political life. America’s shrinking group of winners.

President Trump is an extreme right-wing outlier, no question. And for that reason alone, Americans would do well to consign him to history’s dustbin in November. But that underlying neo-liberal consensus that loathes taxes on the wealthy and a social role for the state, so undermined as it has been by the necessities of the pandemic, remains powerful. America’s political strife is unlikely to end just because Trump loses the 2020 election.

Inderjeet Parmar is professor of international politics at City, University of London, a visiting professor at LSE IDEAS (the LSE’s foreign policy think tank), and visiting fellow at the Rothermere American Institute at the University of Oxford. He is a columnist at The Wire. His twitter handle is @USEmpire.