Trump, a Master of Mass Disorientation, Is Gone. But Has Trumpism?

The US domestic landscape remains explosive and volatile, reflecting a fundamentally divided society. The resurgent extreme Right remains galvanised by opposition to what they perceive as an illegitimate Biden presidency. 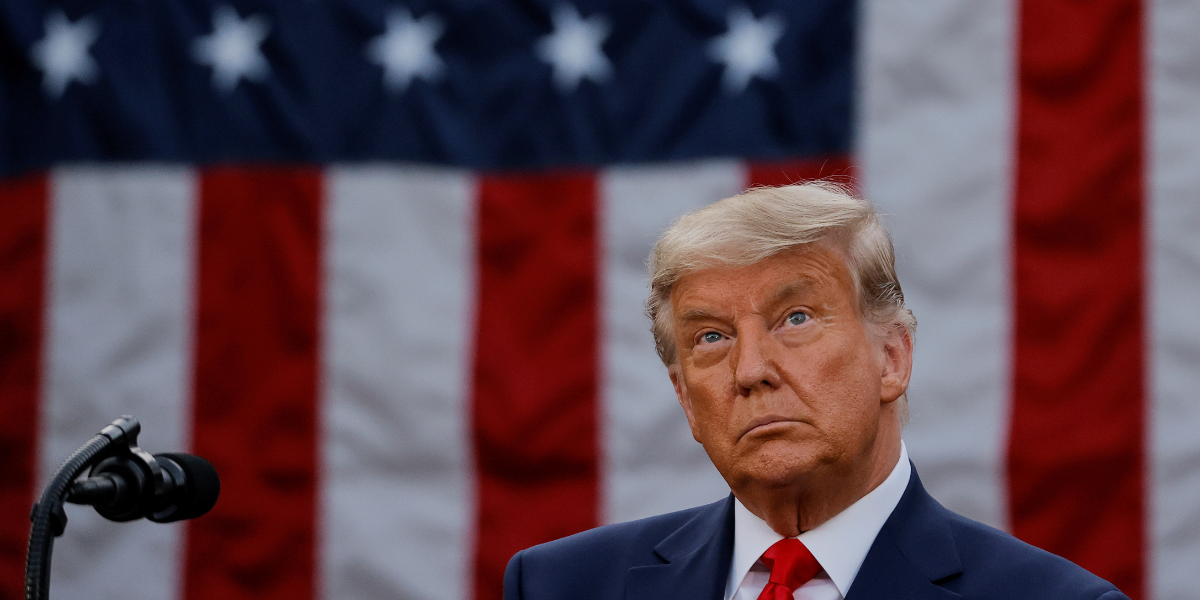 US President Donald Trump delivers an address from the Rose Garden at the White House in Washington, U.S., November 13, 2020. REUTERS/Carlos Barria/File Photo

Just over a week ago, there was dancing in the streets of Washington, D.C., as tens of thousands of angry Donald Trump supporters called multiple rallies in support of their wronged Great Leader who continues baselessly to claim the election was ‘stolen’ due to a massive national conspiracy.

This movement has wind in its sails as the ‘stab-in-the-back’ lie is believed by 70% of Republican voters. Trump, a modern master of mass disorientation, has no plans to depart the national scene anytime soon. He is deconstructing the state and American society. Joe Biden’s victory has dented and slowed that programme, but Trumpism threatens to roil on for some time to come. The return to normalcy which so many long for will require the patience of saints, and the political mobilisation of millions. 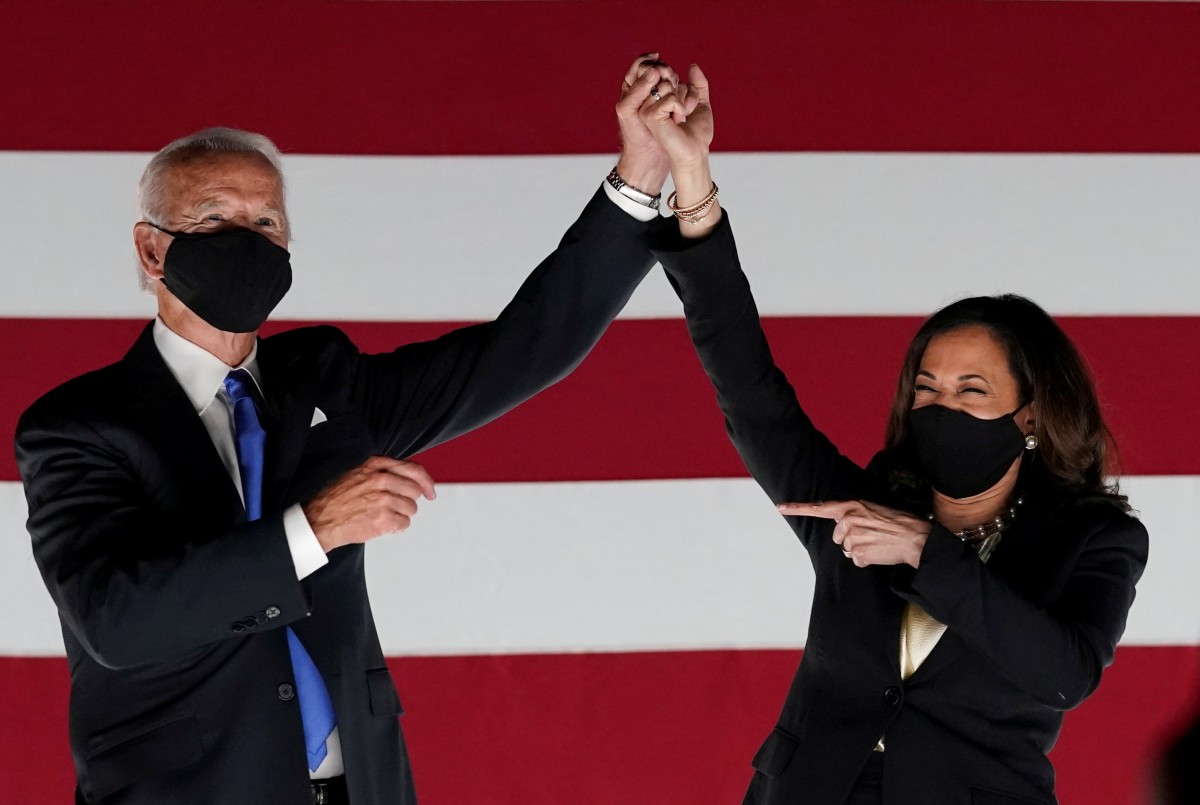 America’s Trump trauma/love affair continues without end; the defeated president refuses to concede to president-elect Joseph Biden, even as his own General Services Administration belatedly accepted an “apparent” Biden-Harris win due to “the law” and “facts”. Stubborn things, facts.

Yet, Trump’s legal cases in Michigan, Wisconsin, Pennsylvania, Arizona and Georgia continue despite lack of evidence. The courts have thrown out dozens of baseless complaints of conspiracies and election fraud; law firms that Trump hired are jumping ship; Republican judges, among others, disloyal in Trump’s eyes, but loyal to their basic commitment to the rule of law and empirical evidence, are demonstrating their independence.

The judge in Michigan virtually accused Trump of trying to disenfranchise the entire state’s electorate and steal the election. Trump’s personal attorney, Rudy Giuliani, who knows how to avoid charges of perjury, did not dare claim in a Pennsylvania court that the GOP case was based on hard evidence of election fraud.

Meanwhile, the head of federal election security was fired for declaring the 2020 poll as the most secure in US history. Chris Krebs’s evidence-based declaration has no place in Trump’s fact-free assumption of total victory.

The GOP leadership is still backing Trump’s rhetorical-legal challenges even in Georgia where the Republican secretary of state has defended the robustness of the count, and the result certified. The appeasement of the far-right President Trump by mainstream conservative GOP has allowed him free rein to sow confusion, disorientation and chaos, and threatens to not only continue to disrupt the transition to a Biden presidency but to so further divide and polarise America as to make it ungovernable.

Some serious analysts suggest that Trump is still engaging in a coup attempt, however incompetently, and must be stopped. Trump’s failing state programme – or deconstruction of the administrative state – continues apace.

What is Trump doing?

Either he is planning to remain in the office via a possible, but increasingly unlikely successful legal challenge including at the Supreme Court, or he is planning to remain a GOP candidate in 2024 by riling up his loyal voters, or he wishes to become a GOP kingmaker. Either way, the GOP leadership is enabling him for now probably to ease him from office and hope that he will campaign hard till the January 2021 elections for the two open US Senate seats in Georgia. Defeat in Georgia would mean a 50-50 split in the Senate, with vice president-elect Kamala Harris with the casting vote. But the GOP leadership – especially those who have their own eyes on a 2024 run for the White House – like Ted Cruz, Marco Rubio, Josh Hawley, among others – do not want to provoke a Trumpian backlash. Trump’s 74 million votes in the election provides him with a powerful voice in intra- and inter-party politics. And it is not likely that Trump will disappear from the political scene after Biden’s inauguration: it is widely believed that Trump aims to take to the airwaves via a TV network affiliation, minister to his cult-like followers, and continue to be the glue that binds together the far and fascistic Right.

I say cult-like but that might be a tad lazy.

His voters are undoubtedly devoted to their candidate. One cannot really argue with the 74 million votes he won, an increase of around 11 million over his 2016 tally. Biden had to beat all presidential election records – almost 80 million votes – to win the election, including a higher proportion of the vote than president Franklin Delano Roosevelt’s 1932 record.  But in the end, it was a relatively small number of votes in a handful of states that swung the election to the Democrat veteran.

Yet an interesting report by the Brookings Institution after the election gives credence to the ‘cult-like’ following claim. Brookings tallied the number of counties across America that each candidate won, and calculated the proportion of US economic activity those counties represented. They found that Trump won around 2500 counties, while Biden won 477. This is not especially surprising as Democratic voters are packed into densely populated big towns and cities, metropolitan areas. Trump’s voters are overwhelmingly white, live in sparsely populated rural America and smaller, especially de-industrialised towns. According to the Brookings study, Trump’s swathe of counties represents a mere 30% of US economic activity while Biden’s 477 counties account for the remaining 70%.

Despite the popular imagery of MAGA-hat wearing, flag-waving aggressive Trumpsters, large numbers of the counties Trump won can only be described as communities of despair – rife with high rates of depression, suicide, drug and alcohol addiction, domestic and police violence. The report says:

“2020’s map continues to reflect a striking split between the large, dense, metropolitan counties that voted Democratic and the mostly exurban, small-town, or rural counties that voted Republican.  Blue and red America reflect two very different economies: one oriented to diverse, often college-educated workers in professional and digital services occupations, and the other whiter, less-educated, and more dependent on “traditional” industries”. 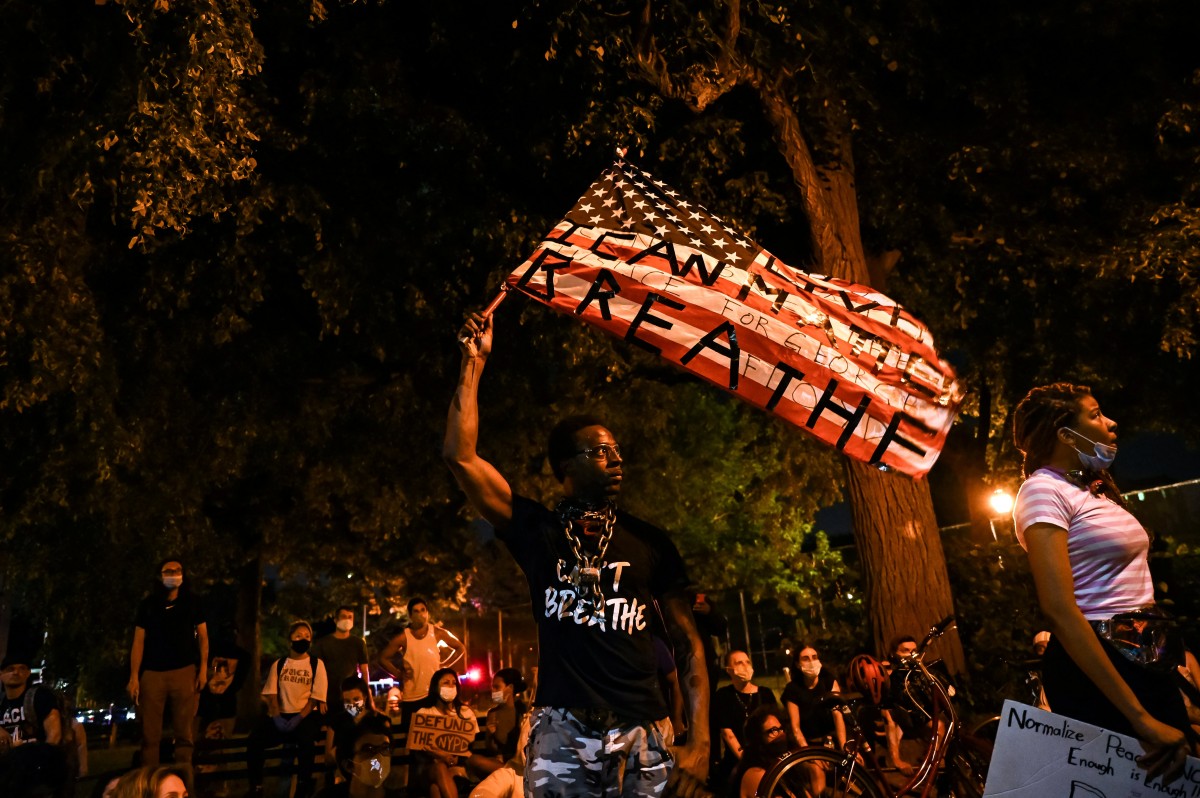 A demonstrator waves an American flag during a protest against racial inequality in the aftermath of the death in Minneapolis police custody of George Floyd, in New York City, New York, US June 9, 2020. Picture taken June 9, 2020. Photo: Reuters

Of course, it’s more complex than that (there’s plenty of depression, suicide and police violence in America’s cities –  but the bigger point is made: there are economic, geographical, and racial divisions in the American electorate that demonstrate a deep schism, rupture, in the social fabric.

Add to that the rival sources of news, Fox for Republicans and CNN, MSNBC, ABC, etc., for Democrats, and there appear near-unbridgeable rifts in the American society. The mental maps occupied by American voters amplify the other divisions. Mentally, they appear to live in different countries, in different realities, believing different truths.

Which all means that Trump is likely to remain a viable political candidacy, strategy and style: plutocratic, authoritarian, populist, racist, post-truth, aggressive, and hostile to democracy.

Meanwhile, the Democrats are busy preparing for power, appointing their transition teams and landing teams for January 20, 2021, even as the Trump administration does its level best to sabotage the transition. Yet, the Democratic party’s own factionalism is growing between the Right and Left in the apparent absence of a common enemy, and as Biden courts ‘moderate’ Republicans. It also remains an open question whether the Democrats can satisfy demands from millennials, anti-racists, and workers impacted by the pandemic, let alone control the politics of street protests.

The US domestic landscape remains explosive and volatile, reflecting a fundamentally divided society. The resurgent extreme Right remains galvanised by opposition to what they perceive as an illegitimate Biden presidency. And they will likely form even stronger international links and programmes, promoting conspiracy theories and supporting political intimidation and violence. Their violence at home intensified this year with encouragement from the White House.

America’s allies remain deeply concerned: the unpredictability, unreliability and disruptions of Trumpism were extreme, but there’s little chance of a return to a mythical golden age of ‘normalcy’. Nevertheless, due to the courts, state and county-level election officials, and the sheer weight of popular opinion, the US political system appears to have squeaked through a major stress test.