Ad on Ram Temple Won't Be Showing at Times Square, Say Diaspora Groups Who Fought It

A broad coalition of civil rights organisations from different religions lobbied against the proposed publicity. 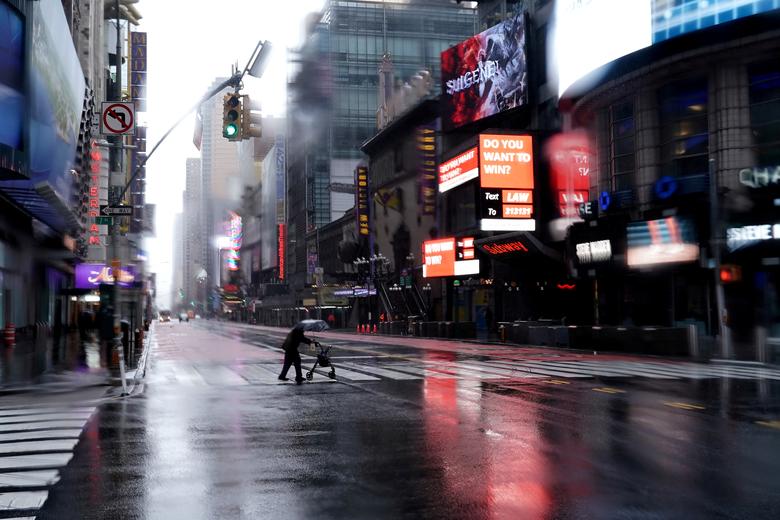 A person with a walker crosses 42nd Street in a mostly deserted Times Square in the Manhattan borough of New York City. Photo: Reuters/Carlo Allegri/Files

San Francisco: A rainbow coalition of South Asian civil rights groups in the US, across all religions, has come together at short notice to protest plans by Hindutva groups to beam portraits of Lord Ram and images of the Ram Temple across Times Square on August 5 to celebrate the laying of the temple’s foundation by India’s prime minister in Ayodhya.

The temple is being built on the site where mobs destroyed the historic Babri Masjid in December 1992, sparking communal violence across India.

Dr Shaik Ubaid, president of the Indian Minorities Advocacy Network, told The Wire that Denise Levine of the Branded Cities Network, the organisation in charge of ads on the Nasdaq Building, had assured him over the phone that her organisation would not run ads for groups involved in demolishing a mosque. “She gave me her word that she would not run the ads,” he says. The Wire contacted Levine but was not able to independently confirm this. This story will be updated after receiving her comments.

Less than a week ago, Hindu nationalist groups announced plans to beam ads supporting the construction of the Ram Mandir at Times Square. Jagdish Sewhani, president of the American India Public Affairs Committee and a long time member of Hindu nationalist organisation, RSS, was widely quoted in the Indian media on the arrangements being made to celebrate the Ram temple, such as the leasing of billboards on Times Square, including the giant Nasdaq screen, which would purportedly be used to beam the words Jai Shri Ram, along with images of Ram and of the temple. The exact cost of the banner is not known, but runs into thousands of dollars per day.

The letter to de Blasio was signed by groups such as Coalition Against Fascism in India, Hindus for Human Rights, Ambedkar King Study Circle and Indian American Muslim Council, among many other groups.

The Wire has information that other outdoor ad agencies in Times Square have also been contacted and asked not to carry ads that celebrate the Ram temple.

“We have been trying to educate the community on what such billboards mean for New York. Celebrating something so brutal as this, is like celebrating the Rwandan genocide. The demolition of the Babri Masjid, for all our families, was a critical point in the identity of India. Muslims in India were shaped by what happened at that time. For such an event to be celebrated is an abomination,” says Sana Qutubuddin of the Indian American Muslim Council.

“Efforts are on to gloss over what was effectively a historic crime. It is a reminder of how strong the Hindutva lobby is in the US. These (Hindutva) organisations position themselves within the space of American multiculturalism. We see their real agenda in moments such as these, where they claim to speak on behalf of all Hindus,” he adds.

Pieter Friedrich, a freelance journalist in the US who has written extensively on Hindutva organisations and personalities in the US, said that this publicity had “nothing to do with religion, but is, instead, a way to promote a political party”.

He feels South Asian civil society groups in the US that are led by minorities have an uphill task, largely because of the level of ignorance in the US about Hindu nationalism. “Nobody in the common American public has any knowledge of Ayodhya, the Ram Mandir or the BJP,” he adds.