Threat to Aboriginal Land, Heritage Back in Focus After Missile Found in Australian Desert

Military weapons testing has been destroying aboriginal heritage sites – a new case brings the fight to the weapons manufacturers themselves. 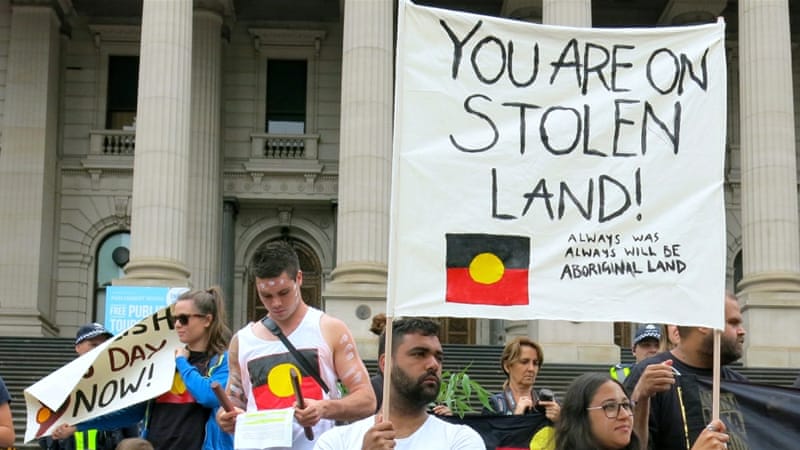 Representational image of a protest in favour of aboriginals. For many Aboriginals, Australia Day on January 26 is "Invasion Day". Photo: Reuters

Weapons testing by the Australian military has long threatened aboriginal land and heritage – but efforts to hold the Australian government accountable have proven largely fruitless. Now, after discovering an unexploded missile at a supposedly protected indigenous cultural site, Kokatha Badu Andrew and Robert Starkey are filing a landmark complaint with the OECD about the corporate practices of weapons manufacturer Saab.

Culturally significant aboriginal heritage sites continue to be put at risk in Australia, despite the international outcry following Rio Tinto’s destruction of the 46,000-year-old caves at Juukan Gorge.

The culprit this time is the Australian Defence Force, which undertakes live-fire training exercises and weapons testing at the Woomera Prohibited Area (WPA). Within range of falling missiles and mortars, there is evidence of sequential spiritual engagement, spanning centuries in rock engravings, heritage artefacts, tool-making sites, and also sites of mythological importance for indigenous people.

Andrew and Robert Starkey, Kokatha Badu (respected senior figures, or lore men) from the Western Desert region of South Australia, have spent decades registering and protecting heritage sites on their land. Their ancestors have occupied the area for more than 11,500 years.

Part of the WPA cuts across Kokatha land, while BHP’s Olympic Dam mine – with the world’s largest known single deposit of uranium – sits in its north. The area’s spectacular salt lakes are an integral part of the indigenous cultural landscape, important in Dreamtime stories that criss-cross the country, says Andrew.

In January 2021, a group of Kokatha traditional owners conducting heritage-site inspections discovered an unexploded high-tech missile in a location where the Australian Defence Department says it does not test weapons. However, this secretive department has refused to explain how the missile, manufactured by multinational weapons-maker Saab, came to be at Lake Hart West, a registered indigenous heritage site.

“Within a one-kilometre radius of the missile there are more than 20 heritage features, with priceless rock engravings only a couple of kilometres away,” says Andrew.

It took 12 months to remove the missile. A Defence Department spokesperson confirmed it was recovered on January 18, 2022, adding that Defence had “worked closely with traditional owners to locate and recover the war materiel”.

The beautiful salt lake has the misfortune of being located inside the red zone (most often used) of the WPA. A video from 2018 and a tweet from 2019 show the Australian Defence Force (ADF) undertaking live-fire training with Saab missiles over Lake Hart. Such testing is permitted over the lake; the heritage sites, which are close by, are off-limits.

In September 2021, the Starkeys lodged a complaint about the missile with the Australian National Contact Point (AusNCP) of the Organisation for Economic Cooperation and Development, which administers OECD guidelines for “responsible business conduct” by multinational enterprises. In so doing, the Starkeys have taken their complaint direct to Saab, the missile’s manufacturer. It’s an original and gutsy move.

Andrew says they did this because “previous efforts to fix this with Defence were unsuccessful”.

The Starkeys’ tenacity in trying to protect their heritage is understandable. Evidence given to an Australian parliamentary inquiry established after the Juukan Gorge caves’ destruction revealed just how threadbare Australia’s protective laws are. Inquiry committee chair Warren Entsch noted “serious deficiencies” in the protection of indigenous cultural heritage. “We struggled to find any indigenous cultural sites that are actually being adequately protected,” Mr Entsch said. “Clearly the system as it is, isn’t working.”

Add a significant array of conflicted interests – a cosy ecosystem of ‘mates’ advancing economic and military interests over a thin commitment to indigenous heritage protection – and you quickly get a sense of what the Starkeys are facing. But they have some impressive international human rights law talent in their team.

‘A culture of impunity’

The Starkeys’ oral evidence (June 29, 2021) and written submission (No 42) to the Juukan Gorge inquiry highlighted the destruction and desecration of many significant Kokatha heritage sites and exposed the danger of unexploded ordnance on their country.

For decades, the ADF has conducted its warlike activities at Woomera with scant regard for this heritage – and, apparently, scant regard for the health and safety of Kokatha people, as Andrew’s evidence made plain. This lack of institutional respect and care has made the Starkeys’ heritage-protection role difficult.

Defence says it manages its activities in a manner consistent with national heritage legislation, but, as the Juukan Gorge inquiry found, legislation in Australia provides little protection.

In evidence to the Juukan Gorge inquiry, Dr Pace noted, “There is a very wide gap between [Australian] legislation and these international standards… This situation has helped create serious cases of devastation of indigenous heritage and a culture of impunity.” Australia needed to urgently tackle this gap and bring its domestic legislation into line with its international obligations. 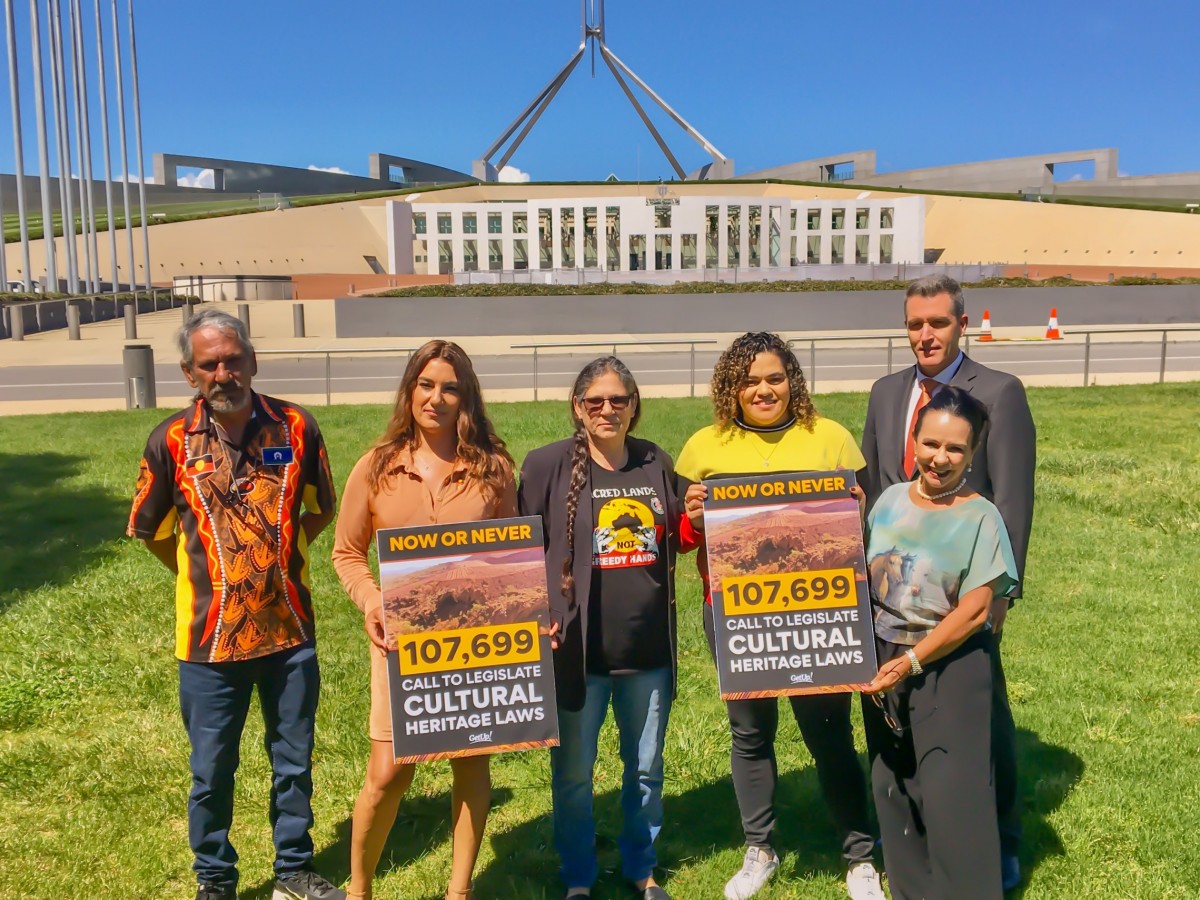 Protest against the destruction of Juukan Gorge and the apathy of Australian government in protecting cultural heritage. Photo: Twitter/ @LindaBurneyMP.

The world recoiled in shock as Australia’s “culture of impunity” towards indigenous heritage was laid bare by the Juukan Gorge disaster. The same culture exists within its Defence Department and activities in the WPA yet, apart from glamorous glimpses released for promotional purposes, Defence manages to keep these activities hidden. The photos the Starkeys submitted to the inquiry offered a rare window into the reality on the ground, becoming the catalyst for the OECD complaint.

The Starkeys want their lands made safe and their heritage sites preserved for future generations. As the complaint process is still under way, the Starkey legal team cannot provide specific details. A summary on the OECD website lists a request for mediation, including an impact assessment, financial compensation and, intriguingly, “a temporary cessation of the company’s supply services”. This likely means they are asking Saab to stop supplying missiles to Defence until the Starkeys can be sure their heritage sites will be safe.

Australia hasn’t seen anything like this case before. It’s also a first in the world of OECD complaints.

“Although arms manufacturers have been pursued via the OECD guidelines, the complaint in the current context is unique,” says Podgorelec. “If successful, it could reverberate through the international community of multinational weapons manufacturers.”

Those multinationals are unlikely to want to risk the reputational damage flowing from a complaint upheld by the OECD.

The OECD guidelines say that even if a country fails to act in line with its international human rights obligations, multinational enterprises are still expected to honour human rights to the fullest extent possible.

Saab AB in Sweden has pledged to apply the UN Global Compact’s ten principles and integrated them into its code of conduct. Its largest shareholder, owning a 30% stake of Saab, is Investor AB (a Swedish investment holding company). Investor AB has investment guidelines dictating that companies must sign up and adhere to the UN Global Compact, the Universal Declaration of Human Rights, and the OECD Guidelines for Multinational Enterprises.

Conflicted interests and the ‘revolving door’

The long line of conflicting interests revealed by this missile situation is astounding.

The conflicts start at the top, where South Australia’s Premier Steven Marshall has responsibility for the aboriginal affairs portfolio and the defence industry portfolio.

One beneficiary has been Saab, which Australian finance department records reveal has been awarded $1.4 billion in contracts by Defence since 2016.

The ‘revolving door’ of senior executives between Defence SA and Saab is also noteworthy.

Further, as the current CEO of Defence SA, Price is also a member of the WPA advisory board, the primary governance body for the WPA “coexistence framework”.

While the government proclaims a commitment to coexistence with indigenous people inside the WPA, the aspiration is little more than a sham. The board has not had an independent chair since it was established and continues to disregard this most basic requirement. Its current chair, former Howard federal government minister Amanda Vanstone, is a board member of the Australian subsidiary of Lockheed Martin, the world’s largest weapons-maker. Lockheed Martin makes the RAAF’s F-35 fighter jet, tested at Woomera, where it has also tested hypersonic weapons and much else. Lockheed is partnering with Saab to supply sophisticated combat systems for several naval shipbuilding projects in South Australia.

“This ‘revolving door’ phenomenon … is ultimately bad for business and more so for the protection of indigenous heritage,” says Dr Pace, who has long experience of human rights coming up hard against business interests.

“Such bodies create a false impression of respect for international standards of accountability but serve to neutralise the purpose for which they were set up. Investors should be aware of such un/ethical realities.”

As an aside: Australia’s former long-serving finance minister Mathias Cormann now heads up the OECD, while his ‘close friend’ Peter Dutton is Australia’s defence minister.

Podgorelec says European nations and corporations typically show greater respect for international law and agreements. If investors in European conglomerates such as Saab were to become aware that international laws are being flouted, investor pressure could be brought to bear, as Australia has experienced. The disaster at Juukan Gorge resulted in serious repercussions for Rio Tinto.

The OECD AusNCP’s initial assessment of the Starkey complaint could be published by early March, although a spokesperson for Australia’s Treasury Department (which provides secretariat support to the AusNCP) said only that the report “will be published in due course following consultation with the AusNCP Governance and Advisory Board and the parties to the complaint”.

Note: The Defence Department (including the WPA Coordination Office) and Premier Steven Marshall were contacted for comment. The premier did not respond. Defence did not answer the questions asked, but provided the information noted in the piece.

Note: This article first appeared on Arena, and is republished via Progressive International. Read the original here.

Michelle Fahy is a researcher and writer investigating the close connections between the weapons industry and the Australian government. Her work has appeared in various independent publications including Arena Magazine, Declassified Australia, Consortium News and Michael West Media. She is on twitter @FahyMichelle and her archive is at undueinfluence.substack.com.