The Jerusalem Declaration on Antisemitism Is a Very Welcome Initiative

For those of us who oppose antisemitism as well as the oppression of Palestinians, the JDA constitutes an extremely valuable resource. 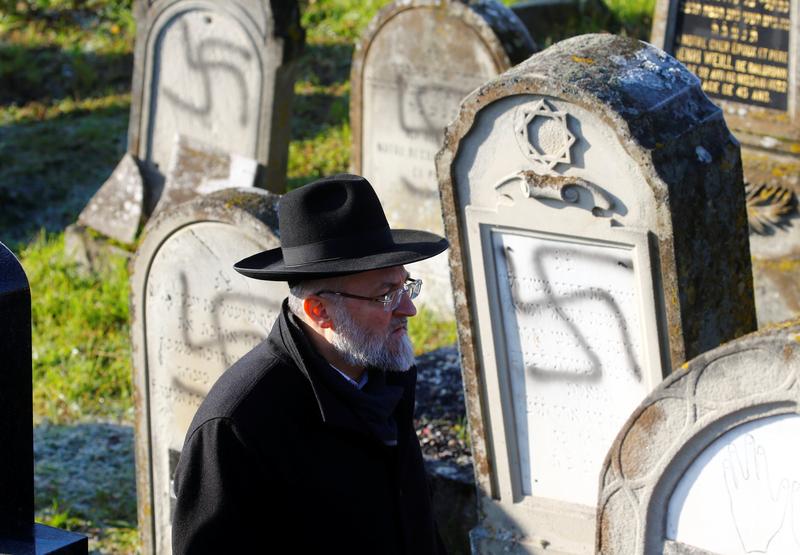 A man walks past graves desecrated with swastikas at the Jewish cemetery in Westhoffen, near Strasbourg, France, December 4, 2019. Photo: Reuters/Arnd Wiegmann

On March 25, 2021, the Jerusalem Declaration on Antisemitism (JDA) was presented by a group of over 200 eminent Jewish scholars of antisemitism studies and related fields, some of whom had been engaged in discussion since June 2020. They defined antisemitism as follows: “Antisemitism is discrimination, prejudice, hostility or violence against Jews as Jews (or Jewish institutions as Jewish,’ and made it clear that ‘while antisemitism has certain distinctive features, the fight against it is inseparable from the overall fight against all forms of racial, ethnic, cultural, religious and gender discrimination.”

The authors explain that the declaration is based on universal human rights principles, and is a response to two circumstances. One is the alarming resurgence of antisemitism by groups mobilising hatred and violence in politics, society and on the internet, which make it imperative to have a usable, concise and historically-informed core definition of antisemitism with a set of guidelines; and the other is the definition adopted by the International Holocaust Remembrance Alliance (IHRA) in 2016, which they regard as unclear in key respects, widely open to different interpretations, and weakening the fight against antisemitism by causing confusion and generating controversy. They express particular concern that some of the ‘examples’ of antisemitism included in the IHRA exclude legitimate political speech and action concerning Zionism, Israel and Palestine. Thus, their aim is two-fold: “(1) to strengthen the fight against antisemitism by clarifying what it is and how it is manifested, (2) to protect a space for an open debate about the vexed question of the future of Israel/Palestine.”

According to the IHRA ‘working definition’ of antisemitism (WDA), “Antisemitism is a certain perception of Jews, which may be expressed as hatred towards Jews. Rhetorical and physical manifestations of antisemitism are directed toward Jewish or non-Jewish individuals and/or their property, toward Jewish community institutions and religious facilities.” This is followed by 11 ‘contemporary examples’ of antisemitism, seven of which relate to Israel. A legal opinion by Hugh Tomlinson QC submitted to the UK House of Lords in March 2017 described this definition as “vague”, “unclear”, “confusing”, “too narrow”, and “a definition which lacks clarity and comprehensiveness’; moreover, ‘A number of the “contemporary examples” of antisemitism in public life included in the IHRA Definition might, if read literally, appear to condemn as antisemitic conduct which does not constitute or manifest hatred or intolerance against Jews”.

Also read: The Ghosts of Auschwitz: Inside Hitler’s Killing Machine

As Neve Gordon and Mark LeVine observe, according to this definition, Albert Einstein and Hannah Arendt would be antisemitic because they sent an open letter to the New York Times in December 1948 describing the Israeli right-wing Herut party as ‘closely akin… to the Nazi and fascist parties’; Professor Yeshayahu Leibowitz would fall into the same category because of his reference to ‘phenomena of Judeo-Nazism’ in 1982; and so would Israeli human rights organisation B’tselem for producing a report entitled ‘A Regime of Jewish Supremacy from the Jordan River to the Mediterranean Sea: This is Apartheid’. Most damagingly, “Once criticism of Israel becomes the primary marker of anti-Semitism, then the unquestioned support of American evangelicals for Israel is considered a blessing, even as anti-Jewish stereotypes remain prevalent among members of their communities, while Israel’s alliance with Europe’s most illiberal and anti-Semitic governments (particularly Hungary’s and Poland’s) is considered ethically kosher.”

Indeed, it can be argued that by blurring the distinction between the Jewish people and the state of Israel, the IHRA definition is itself antisemitic, because it implies that all Jewish people are implicated in the crimes committed to establish and perpetuate the Israeli state. Those responsible for the aggressive campaign that has led to the widespread adoption of the IHRA definition are also guilty of promoting antisemitism by implying that all Jews – and not the Israeli state and its supporters – are responsible for the resulting assault on academic freedom and victimisation of students, faculty, universities and others who support the human rights of Palestinians and/or criticise the Israeli state.

Support for the non-violent Boycott, Divestment and Sanctions (BDS) campaign has effectively been criminalised by this lobby. What are the demands of the BDS campaign? (1) Ending Israeli occupation and colonisation of the Palestinian Occupied Territories and dismantling the ‘apartheid’ wall that cuts deep into Palestinian land; (2) Recognising the fundamental rights of the Arab-Palestinian citizens of Israel to full equality; (3) Respecting, protecting and promoting the rights of Palestinian refugees to return to their homes and properties as stipulated in UN Resolution 194. Every one of the these demands is supported by international human rights law; to say that Palestinians are not entitled to these universal rights is racist.

Also read: ‘Home Is Where the Heart Is’: Remembering Kolkata’s Jewish Community

The confusion and contention resulting from the IHRA WDA not only undermined struggles against antisemitism and for the human rights of Palestinians, but also divided and weakened antiracist struggles more generally, because “Enacting laws or adopting statements that potentially criminalise criticism of state violence and racism subverts the struggles of marginalised communities seeking social justice.” Concerned at the undermining of their moral standing and physical security by widespread adoption of the IHRA definition, numerous Jewish individuals and organisations explicitly rejected it. The Jerusalem Declaration grew out of this movement.

Because the Jerusalem Declaration presents itself as an alternative to the IHRA definition, it must necessarily grapple with the Palestine-Israel conflict. Of the fifteen guidelines it presents, five are general examples of antisemitism, and ten relate to Israel and Palestine. However, in stark contrast with the IHRA definition, five of these latter are “examples that, on the face of it, are not antisemitic (whether or not one approves of the view or action)” (emphasis added). These are “11. Supporting the Palestinian demand for justice and the full grant of their political, national, civil and human rights… 12. Criticising or opposing Zionism as a form of nationalism… 13. Evidence-based criticism of Israel as a state. This includes its institutions and founding principles… Thus… it is not antisemitic, in and of itself, to compare Israel with other historical cases, including settler-colonialism or apartheid… 14. Boycott, divestment and sanctions are commonplace, non-violent forms of political protest against states. In the Israeli case they are not, in and of themselves, antisemitic. 15. Political speech does not have to be measured, proportional, tempered, or reasonable to be protected under Article 19 of the Universal Declaration of Human Rights… Criticism that some may see as excessive or contentious, or as reflecting a “double standard,” is not, in and of itself, antisemitic…”

The authors make the important clarification that each of the guidelines should be read in the light of the others, and they call for judgement and sensitivity to context in applying them to concrete situations; for example, hostility to Israel expressed as a reaction to a human rights violation, or as an emotional response by a Palestinian to an experience at the hands of the state, would not be antisemitic.

Progressive Jewish and other groups campaigning for Palestinian rights welcomed the JDA as a far superior alternative to the IHRA definition, although some had reservations. In the UK, Jewish Voice for Labour recommended that it be deployed in universities, political parties, local authorities and other institutions. In the US, Jewish Voice for Peace acknowledged that it “opens space for debate” and “champions freedom of speech”, but felt that the disproportionate emphasis on Israel-Palestine distracted from the danger faced from far-right white supremacists, and argued that the authors should have included Palestinian perspectives and analyses. These two criticisms had earlier been voiced more emphatically by the BDS National Committee, along with more detailed criticisms of some of the JDA formulations.

I agree with Mike Cushman that the involvement of pro-Palestinian groups in drafting the JDA would have resulted in improved formulations, but at the cost of drastically reducing its weight as a statement about antisemitism. I also feel that oppressed people are entitled to define their own oppression provided their vision of freedom from oppression doesn’t trample on the rights of others; for example, the authors of the JDA may feel that antisemitism predates white-supremacism, and therefore cannot be attributed to it. These criticisms misread the JDA as a statement about Palestine and Israel, whereas its real purpose is to draw the line demarcating antisemitic hate speech from protected freedom of expression and academic freedom. If it is read in the same nuanced manner as the manner in which it has been written, I believe it achieves this purpose.

For those of us who oppose antisemitism as well as the oppression of Palestinians, the JDA constitutes an extremely valuable resource, and we should disseminate it as widely as possible. We should argue for its adoption by public bodies instead of the IHRA WDA as it provides the clarity needed for effective action against antisemitism and also protects the free speech and debate required to campaign for the rights of Palestinians.

Rohini Hensman is a writer and independent scholar whose book, Indefensible: Democracy, Counter-Revolution, and the Rhetoric of Anti-Imperialism, tackles the pernicious legacy of Stalinist imperialism.