Even wire transfer payments to accounts in Afghanistan have become impossible for aid organisations. 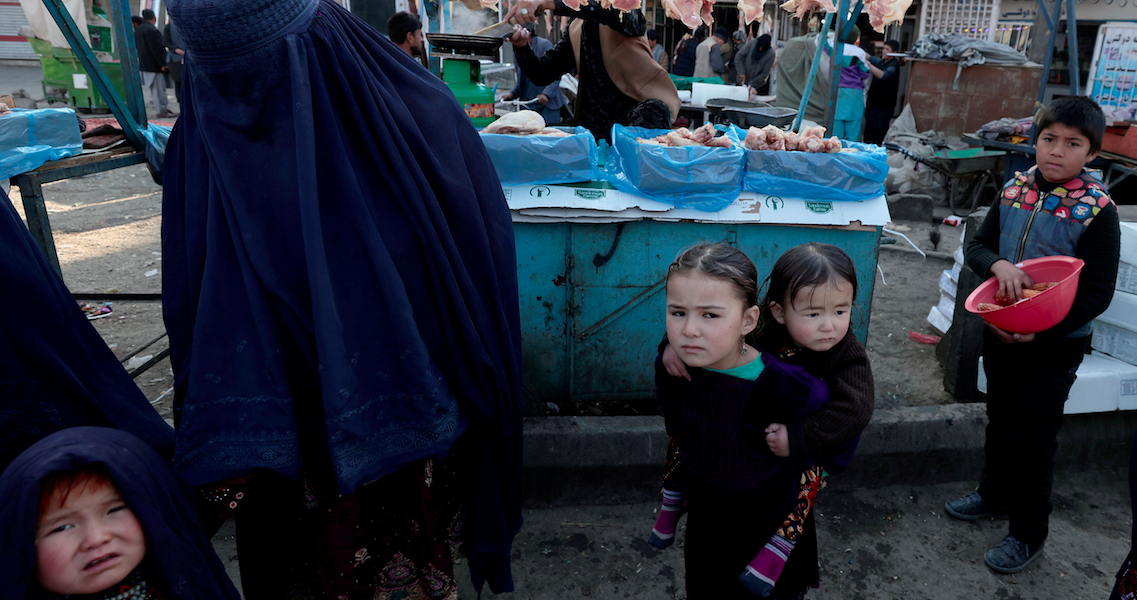 Representative image. A mother shops with her children at the market in Kabul, Afghanistan October 29, 2021. Photo: Reuters/Zohra Bensemra/File Photo

The widely agreed upon illegitimacy of the Taliban regime, because of its involvement in terrorism and human rights abuses, has cast uncertainty on macroeconomic pathways for Afghanistan.

The country’s economy is estimated to have contracted by 40% since the Taliban takeover in August. This has had substantial negative implications on basic services, financial systems and markets, leading to a fast deteriorating situation for common people.

Money is not physically available and therefore cannot flow into the country’s economy.

Even before the regime transition, the previous civilian government relied heavily on donor support that funded more than three-quarters of its expenditures, with the bulk of the support being channeled towards security and counter-terrorism activities. The remainder of the aid was associated with large scale misappropriation by local strongmen, undermining state legitimacy.

Four months into the formation of the Taliban-led government, public finances remain precarious and strained.

Overseas assets of the Afghan Central Bank – over $9.5 billion in the US alone – have been frozen and Afghan banks heavily relied on physical shipments of US dollars are in the midst of an acute and immediate liquidity constraint. The World Bank and the International Monetary Fund (IMF) have also suspended financial support.

Since external aid accounted for such a large chunk of the government’s budget, the result of the suspension of access to the Central Bank’s assets has been a severe squeeze on financial liquidity. Afghanistan has been almost completely reliant on foreign cash to pay civil servants’ salaries, and with that uncertain as well, banks, passport offices, schools and universities have largely remained closed. The funding shortfall that has manifested into a dangerous deepening of the humanitarian crisis.

American sanctions on the Taliban do not manifest a clear policy objective, as it was party to the March 2020 Doha accord, setting in motion the eventual takeover by the Taliban. Reaffirming existing US sanctions on the Taliban, the US Treasury has prevented Afghanistan’s Central Bank from accessing foreign currency reserves, even as collateral to provide short-term liquidity to settle dollar transactions. With banks not able to pay depositors, the liquidity crisis is steadily worsening.

In November, through an open letter, Taliban Foreign Minister Amir Khan Muttaqi urged US Congress members to release Afghan assets frozen after their takeover of the country, warning that the economic situation could spark a mass exodus. The value of Afghan currency continues to drop against the US dollar at over 110 Afghanis. 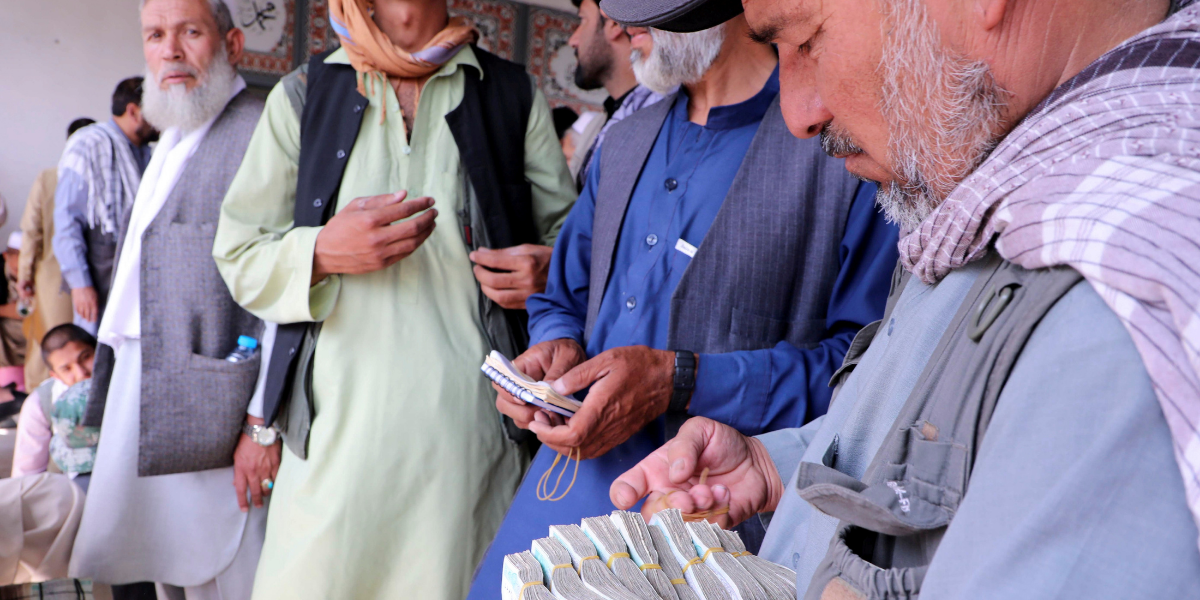 In an attempt to stop the drastic depreciation of the Afghani (Afs), the Taliban announced a ban on the use of foreign currency stating that “the economic situation and national interests in the country require that all Afghans use Afghan currency in their every trade.” There are also reports that there is about $4 billion worth of Afghanis in the economy, but about $500 million worth is in circulation, and the “rest is sitting under the mattress or under the pillow” because people are afraid.

If the Afghan government continues to be considered unworthy of international aid, there may be consequences for trade finance, as the country imported about $7 billion worth of goods and products and services last year. It could thus mean halting the flow of money to Pakistani and Indian traders, who are Afghanistan’s main buyers.

The takeover by the Taliban has sharply affected shipments of perishable produce like vegetables and fruits, and traders are facing difficulties due to different laws for trade with Afghanistan at the Torkham border crossing.

Despite Pakistan’s assurances that the border will remain open, only a limited number of trucks are cleared to cross. After considerable delay, on December 3, Imran Khan’s government said that it would allow the transport of 50,000 metric tonnes of wheat and lifesaving medicines from India to Afghanistan, on Afghan trucks, from the Wagah border to Torkham.

The United Nations Development Programme (UNDP) has warned of a ‘colossal’ collapse of Afghanistan’s banking system within months, which could take decades to rebuild, given the people’s inability to repay loans, lower deposits and a cash liquidity crunch.

It has proposed that deposit insurance schemes be included in the banking system along with adequate liquidity for short- and medium-term needs and credit guarantees and loan repayment delay options. Aid organisations estimate that a minimum of US $606 million is required to provide assistance to 11 million crisis-affected Afghans this winter. There is no way to transfer salaries to bank accounts, and thus, aid organisations too are struggling  to pay doctors, nurses and other humanitarian workers on the ground. While donors have been generously contributing, liquidity challenges amid the crisis has meant that financial commitments have not translated to actions on the ground.

The World Bank’s board has endorsed transferring $280 million from a frozen trust fund to two aid agencies, subject to approval by 31 donors to the Afghanistan Reconstruction Trust Fund (ARTF).

Whether sanctions should apply to the Afghan Central Bank or to transactions involving government offices or ministries controlled by sanctioned Taliban entities needs to be considered.

There are no clear guidelines from the UN Security Council’s relevant sanctions committees. Meanwhile companies that print Afghan currency in Europe are concerned that dealing with the sanctioned Central Bank may affect their own credentials, and as such are not shipping new bills to Kabul. The Taliban lacks the capability to print money.

Human Rights Watch had suggested that US authorities allow the Afghan Central Bank to engage in limited settlement transactions with outside private banks or settle incoming dollar deposits from legitimate private depositors, such as UNICEF, UNDP and others.

Also read: Can the World Rescue Afghanistan from Mass Starvation, Bypassing the Taliban?

On December 13, the US announced that it will issue licenses to banks to let Afghans living abroad transfer money to relatives in Afghanistan, reiterating that it would not ease sanctions on the Taliban. It is anticipative to predict how much of international flows will resume.

For now, even wire transfer payments to accounts in Afghanistan have become impossible for aid organisations, as international currency cannot be changed into local currency by banks in the country.

It is hoped that the situation will stabilise to an extent once banks can process incoming dollar deposits. The US must reconsider its sanctions policy and allow legitimate financial transactions related to humanitarian activities.