Despite the result, proponents successfully used Switzerland’s system of direct democracy to create a nationwide debate on money, work and the pursuit of happiness 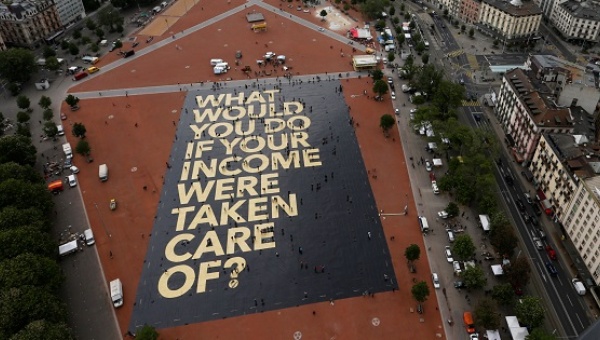 An 8,000 square meter poster on the Plainpalais square in Geneva. Credit: Reuters

Bern: On June 5, close to 77% of Swiss voters said no to introducing an unconditional basic income, which would have meant that everyone would be guaranteed a minimum sum of money whether they work or not. It was the first time ever that a nationwide vote was held on the issue.

Switzerland is an expensive country. And even though the salaries are high, rent, mandatory health insurance and taxes eat a big chunk of my journalist salary. No surprise that a household earning $4,000 a month gets classified as poor here.

If the basic income initiative had succeeded, I would – after the couple of years that it would take to become a law – be entitled to receive up to 2,500 Swiss francs ($2,520) from the state if I quit my job. But if I continued working, I would have to pay a tax on anything I earn above 2,500 Swiss francs.

But alas, my dreams of walking out of my office and working through my bucket list didn’t come true. A whopping 76.9% of Swiss voters in all 26 Swiss cantons (states) rejected the basic income proposal. Here’s why.

Fear of an immigrant influx

Close to a quarter of Switzerland’s population are foreign nationals and the vast majority of them (around 80%) are from Europe. Around half of all foreign residents come from the neighbouring countries of France, Germany and Italy (as well as Portugal), whose citizens are allowed to settle in the country due to a bilateral agreement with the European Union.

Even though this agreement is up for renegotiation following a national vote in 2014 where people voted to limit the number of EU workers coming into the country, it still stands for the moment. Many feared that the lure of a monthly salary for doing nothing would attract droves of European immigrants before the window closes. Already in 2015, the number of applications for a Swiss passport have jumped by almost 20%.

Worry over footing the bill

Switzerland has one of the lowest tax burdens in Europe, at around 22% compared to the average of 36% in OECD countries. That doesn’t stop people from groaning when they get their annual tax bill.

The cost of providing a basic income for all Swiss residents was estimated at 208 billion Swiss francs or around 35% of the country’s GDP. It didn’t help that the proponents of the initiative failed to elaborate on where exactly this money would come from. Opponents had warned that a minimum of 25 billion Swiss francs would need to be raised through additional taxes.

All through 2015, the papers in the country have been full of stories on the impact of the strong franc on the Swiss economy, including mass layoffs in certain export-heavy sectors. This raised questions about what the country can and cannot afford, and any financial extravagance was likely to be frowned upon.

Erosion of the motivation to work

The Swiss value work and spend more time doing it than any other European country. A full-time worker spends a little more than 41 hours a week on average on the job, compared to 37 hours in France and 40 hours in Germany.

Holidays are for wimps here. In 2012, Swiss voters rejected an initiative to increase the statutory holiday requirements from four weeks a year to six weeks. No wonder the idea of sitting at home and drawing an income seemed obscene. Many feared it could make young people lose the motivation to work and pose a threat to the country’s world renown apprentice system, a crucial part of Swiss economic success and low unemployment rate.

Nevertheless it has been an interesting ride. The campaigners for a basic income were more than happy with the result after convincing 23.1% of voters (they would have been satisfied with 15%). The campaign itself was quite innovative by Swiss standards and included some interesting stunts like handing out money at Zurich’s railway station, making the world’s largest poster and covering the parliament square in small change. More importantly, they successfully used Switzerland’s system of direct democracy to get their point across and create a nationwide debate on money, work and the pursuit of happiness.

Anand Chandrasekhar is a journalist at swissinfo.ch and is based in Bern, Switzerland.